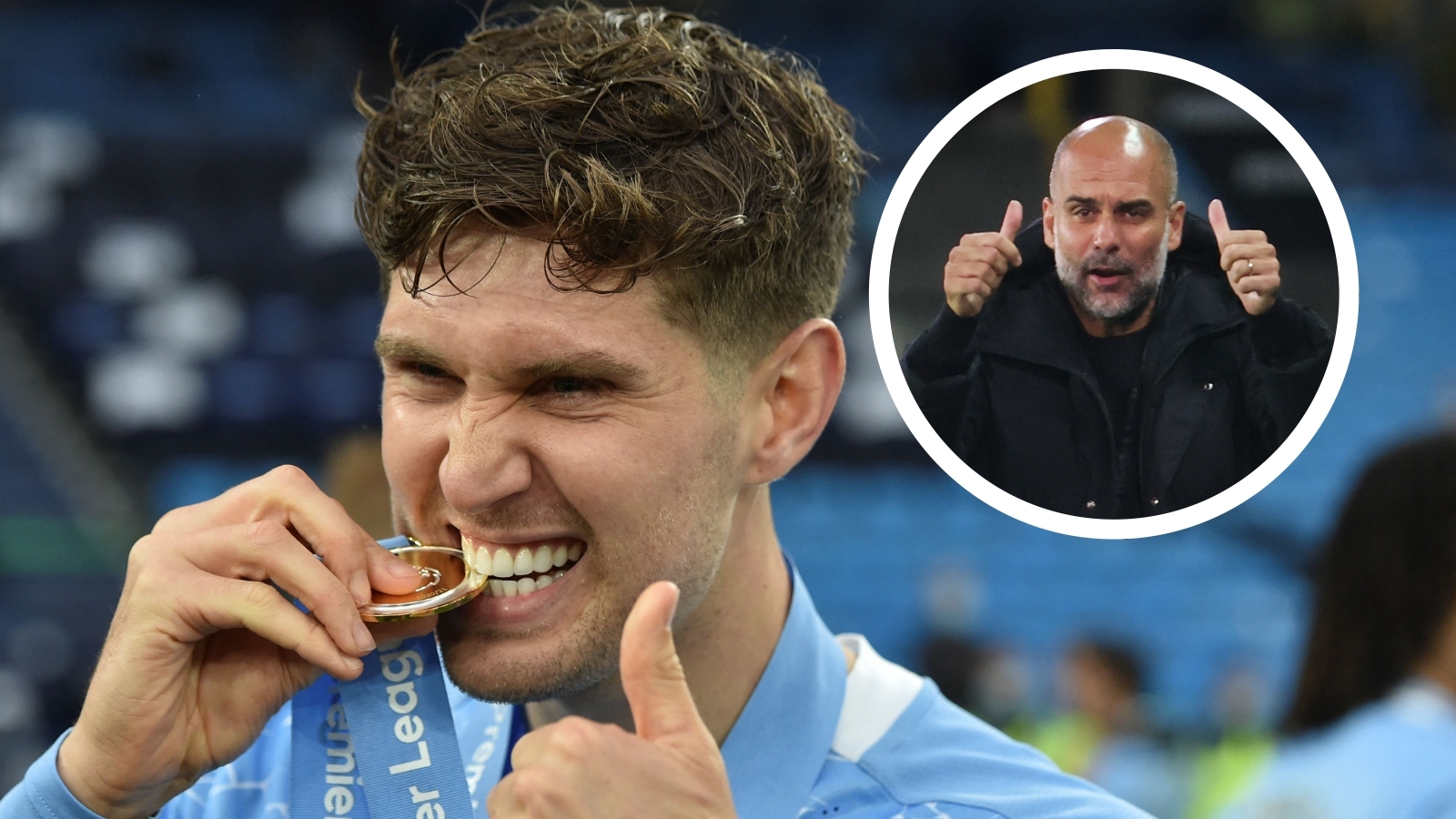 In 12 months, the centre-back has been rejuvenated, moving from the fringes of the squad to part of Pep Guardiola's plans for the future

John Stones was seemingly heading in only one direction at Manchester City a year ago – towards the exit door.

He was so low in the central defensive pecking order at the end of the 2019-20 campaign that he could only watch on in frustration from the bench as a makeshift back-three of Laporte, teenager Eric Garcia and veteran midfielder Fernandinho failed to stop Lyon in an embarrassing Champions League quarter-final loss.

However, Stones ended the season as a first-team regular, having replaced Aymeric Laporte in Pep Guardiola's preferred starting line-up, and was even named in the Premier League Team of the Year.

Now, with a new five-year deal signed in August, Stones is very much part of the club’s future, combining his trademark style with a determined solidity that underpinned much of last season’s title success and run to the Champions League final.

It was 12 months ago this week that the remarkable renaissance began.

Stones had played the opening game of the season when a hastily assembled and largely unfit side scrambled an away win at Wolves. But he missed the next seven Premier League matches before being recalled against Burnley at the end of October – and never looked back.

City kept a clean sheet in a 5-0 victory and of the next 14 Premier League matches Stones started, they conceded only two goals – away to Chelsea and Liverpool.

Between that disappointing end to the 2020 season and Stones' recall, City had added Ruben Dias and the Portuguese centre-back helped turn their defensive record around.

He was the experienced, organised leader that Guardiola had been looking for since club legend Vincent Kompany had left the club in 2019 after playing such a major role in the previous season’s title success.

The Belgian played three seasons alongside Stones when they were together and never had any doubts about his quality.

“I always enjoyed playing with John, because he's so gifted and it was very compatible,” Kompany told Goal. “For a defender, he's fast, he covers a lot of ground very quickly and he's light on his feet, which helps him a lot.

“He's always making good angles, he's always secure on the ball and he's always listening. He's ready to receive any information you give him. And he's happy to take it in and to give it value.

“I always enjoy playing with him because, with John, if you communicate well with him and if you get on his wavelength, he's a top, top central defender that is very rare to come across.

“He has all the attributes and I think the little things that we can all lack. I had my weaknesses, just like John has his weaknesses and just like Ruben has weaknesses – but if you communicate well, they would never be exposed with him because he's a very clever footballer as well.”

Stones and Dias’ record together was extraordinary as they cruised to the title despite being in the bottom half of the table ahead of the win against the Clarets.

For their first 20 matches as a partnership, they had actually scored as many goals (five, in total, with Stones netting four of them) as they had conceded.

After turning 27 in May, he took that impressive form into the Euro 2020, where he started each of England’s seven matches as the Three Lions reached the final.

But, of course, it’s not just in defending that Stones excels. He is one of the most gifted ball-playing centre-backs in Europe, confidently stroking passes long, short or through the lines to regularly start attacks.

It’s a gift to Guardiola and his philosophy. The Catalan had always believed in Stones' ability, though, and praised the defender for producing the performances he needed on a regular basis.

“He is difficult to get a glove on, especially when you have possession,” Kompany added. “He's always making good angles and will break lines when he needs to, which is something very special in a modern defender and he has it.

“He's improved on a lot of the things that he had to improve on in the beginning and that's always a good sign. He's become much stronger, much better at defending aerially in the box and putting his foot through and making emergency tackles when needed.

“His overall game as a defender has improved on top of what he had to offer as a ball-playing defender. I've always been a fan of John.”

This season has been impacted by an injury picked up for England, while he missed the midweek victory over Club Brugge for personal reasons.

That has left the door open for Laporte to reclaim his place and the Spain international has seized the opportunity with a series of strong displays.

Guardiola now has an incredible trio of options in the centre of defence, with Netherlands international Nathan Ake pushing to be part of the conversation. But any doubts about Stones’ quality have long been forgotten.

Liverpool boss Jurgen Klopp questioned the decision of Gareth Southgate to select Stones for England ahead of Joe Gomez during the recent international break.

But anyone who watched him play for City during the past 12 months would be able to give him a very quick answer: Stones has been outstanding for club and country in 2021.