The forward initially frustrated fans and team-mates with his profligacy, but the 21-year-old will be key to Los Blancos' hopes of beating Man City

For Real Madrid to upset the odds, mount another dramatic ‘remontada’ against Manchester City and reach the Champions League final for the first time in four seasons, a lot of responsibility rests on Vinicius Junior’s shoulders.

The 21-year-old winger scored a sensational solo goal in the 4-3 first-leg defeat at the Etihad Stadium and has come up trumps for Los Blancos at home against Paris Saint-Germain and Chelsea in the last two rounds.

This is his fourth season at Madrid but his first as a genuine star, with the frustrations of his prior inconsistency fading, and expectations for what he can accomplish rising, both now and in the future.

Real Madrid’s disappointment at not signing Kylian Mbappe last summer was deep, but Vinicius, who struggled for three campaigns to fill Cristiano Ronaldo’s shoes, has improved so much that Madrid were still able to conquer La Liga and go deep in Europe.

The maturing forward’s goal in Manchester marked a huge shift from the last time Vinicius visited, in August 2020, which was one of his lowest moments since joining Madrid.

The winger, still in his inconsistent days, was left out of Zinedine Zidane’s starting lineup for the second leg of their Champions League last-16 tie against City, despite the team’s 2-1 home defeat in the first clash.

Rodrygo and Eden Hazard started either side of Karim Benzema, with Vinicius snubbed.

In response, Vinicius did not warm up with his team-mates according to AS, with Zidane instead catching the forward on his phone in the dressing room. 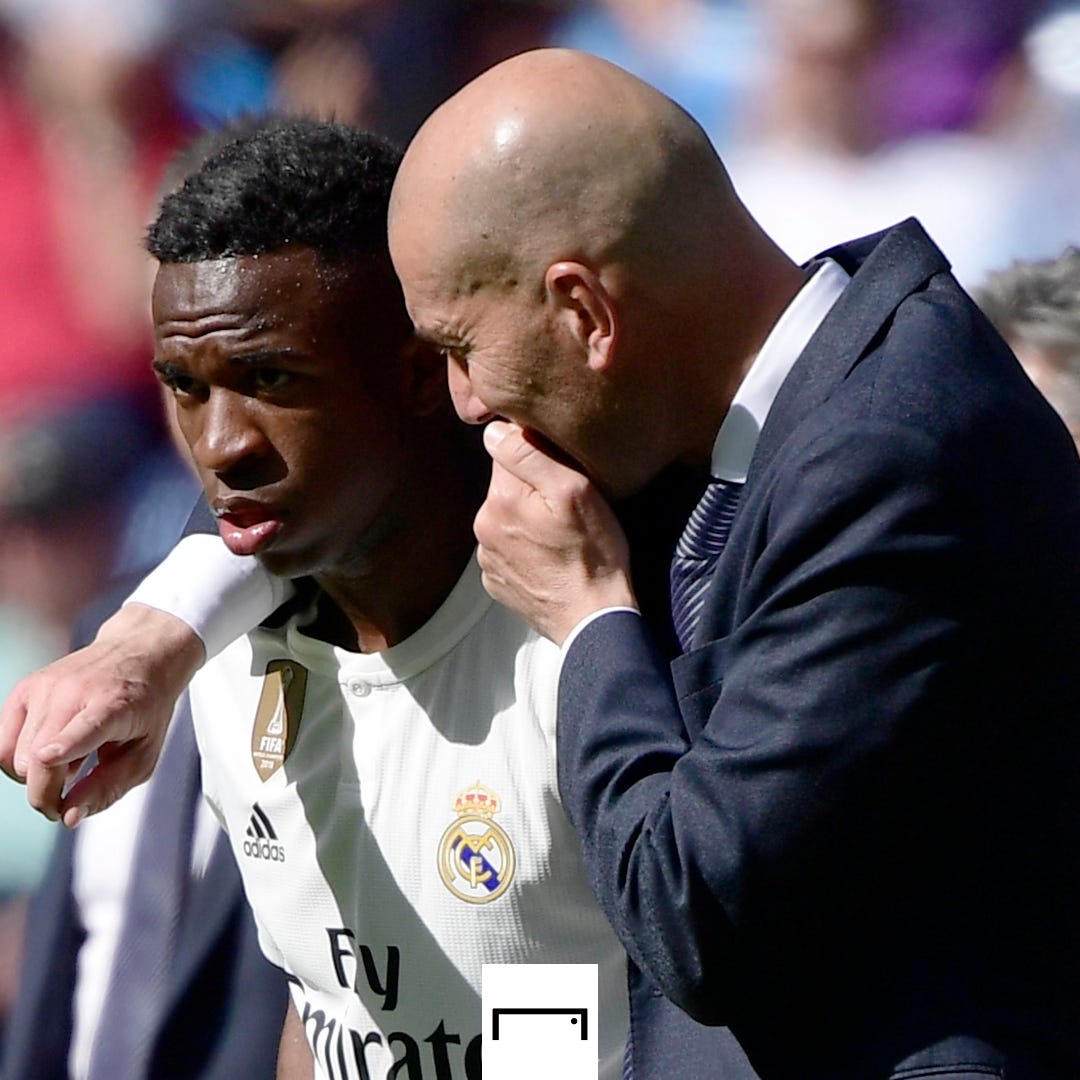 The coach decided not bring him on in the game even as Madrid chased it, turning to Marco Asensio, Luka Jovic and Lucas Vazquez ahead of the winger, as Pep Guardiola’s side earned another 2-1 victory to progress 4-2 on aggregate.

The forward had to apologise to Zidane before getting back into his plans last season, which was when his improvement began, even if he was not fully unlocked until Carlo Ancelotti arrived in the summer.

For all of Zidane’s success at the helm of Real Madrid, it was the Italian’s return that helped Vinicius truly blossom into the player he is today – a difference-maker.

The Italian structured Madrid to play to Vinicius’s counterattacking strengths and helped him improve his composure in front of goal.

Perhaps most importantly, Ancelotti publicly and privately praised Vinicius, showing his faith in him, which he never truly felt under Zidane.

“I’ve done nothing more than give him confidence,” said Ancelotti. “I’m not a magician.”

Now, the forward no longer looks shell-shocked when in good positions with the ball, and is capable of taking a breath before making better decisions. Shots which would end up in the stands now nestle in the back of the net.

“I’m 21 now; before I was younger,” said Vinicius. “I arrived from Brazil at 18, I had barely played for a year in the first team and I arrived at Real Madrid, at the best team in the world, with many great players, and I arrived to learn.

"I’ve been training a lot for three years and Ancelotti arrived, and gave me the confidence I needed.”

Being more trustworthy with the ball has helped his relationship with Karim Benzema improve to the point where the duo are Spain’s most deadly strike partnership, with 60 goals and 27 assists between them this season across all competitions.

They combined again against Espanyol on Saturday in a 4-0 win which helped Madrid clinch La Liga victory.

It took Vinicius a while to gain the respect of Benzema, who infamously mocked him when speaking to Ferland Mendy at half-time of a game in October 2020.

“He is playing against us,” grumbled Benzema, but as Vinicius improved in the second half of last season, they began to find each other on the same wavelength. Ancelotti has fine-tuned the combination to perfection.

Benzema was even spotted giving Vinicius some advice in the second leg against Chelsea, showing the winger where to find him, breaking into the area, and it led to the goal which knocked out Thomas Tuchel’s reigning champions.

Vinicius’s best individual qualities were showcased in his first-leg goal in Manchester, with a brilliant stepover dummy and a blistering sprint down the left to make a fool out of Fernandinho before finishing a chance that previously would have gone to waste.

Bursting into the box, Vinicius cut a perfect finish across Ederson and into the far corner.

Aymeric Laporte did not have the urgency to get across to the striker in time; in fact, it looked like he was relaxed and defending a previous version of Vinicius, one who would have spurned the opportunity.

On the sideline, Guardiola fell to his knees once Vinicius roared past Fernandinho. He, at least, knew what was about to happen.

The coach’s best-laid plans were shredded by one moment of unpredictable cunning, helping Madrid stay one goal behind their opponents.

Vinícius Júnior, THAT IS CLASS! 🤩

What a run and finish! 💥#UCL pic.twitter.com/UUvILhtzLu

However, just as Ronaldo was the figurehead for Madrid’s four Champions League victories in the past nine years, Benzema will be the man most heavily linked with Madrid’s run to this point.

But as Benzema did for Ronaldo for so long, Vinicius is providing service on a silver platter.

The winger set up a goal for his team-mate against PSG in the comeback and then repeated the trick against Chelsea in extra time, to help Madrid progress.

The French striker is still at the top of his game, but at 34, the next decade belongs to Vinicius.

He has virtually seen off Gareth Bale and Eden Hazard, and for the first season since he left in 2018, Madrid no longer contain a Ronaldo-shaped cavity.

Although comparisons with Lionel Messi made in some corners of Madrid media early in his career were laughable then and still ill-considered now, it would not be a surprise now if one day, the Brazilian won the Ballon d’Or.

Beyond Mbappe and Erling Haaland, he is one of the most likely candidates in the years ahead.

And if he can fire Madrid into the Champions League final, Vinicius will hit new heights.