AC Milan want to sign Real Madrid forward Brahim Diaz, with the 21-year-old having made a positive impact during his loan spell with the Serie A side.

Goal can reveal that Milan bosses are keen to make the loan move permanent and, although they do not have a purchase option, they are keen to discuss a transfer with Madrid.

While Brahim has always wanted to succeed at the Bernabeu, Madrid will now weigh up whether to keep him beyond the end of the 2020-21 campaign or sell for what would be a significant amount amid the coronavirus crisis.

How has Brahim Diaz performed at Milan?

Following his loan switch to Milan in September 2020, Brahim immediately took to life in Italy and has become an important member of Stefano Pioli's first-team squad.

He has made 25 appearances in all competitions, scoring four goals and laying on two assists, although he has missed the last two Milan games due to injury.

While he isn't as influential as the likes of Zlatan Ibrahimovic, Hakan Calhanoglu or Rafael Leao, Brahim has still been heavily involved and boasts 17 completed dribbles in Serie A - a significant number given he has only played 700 minutes. 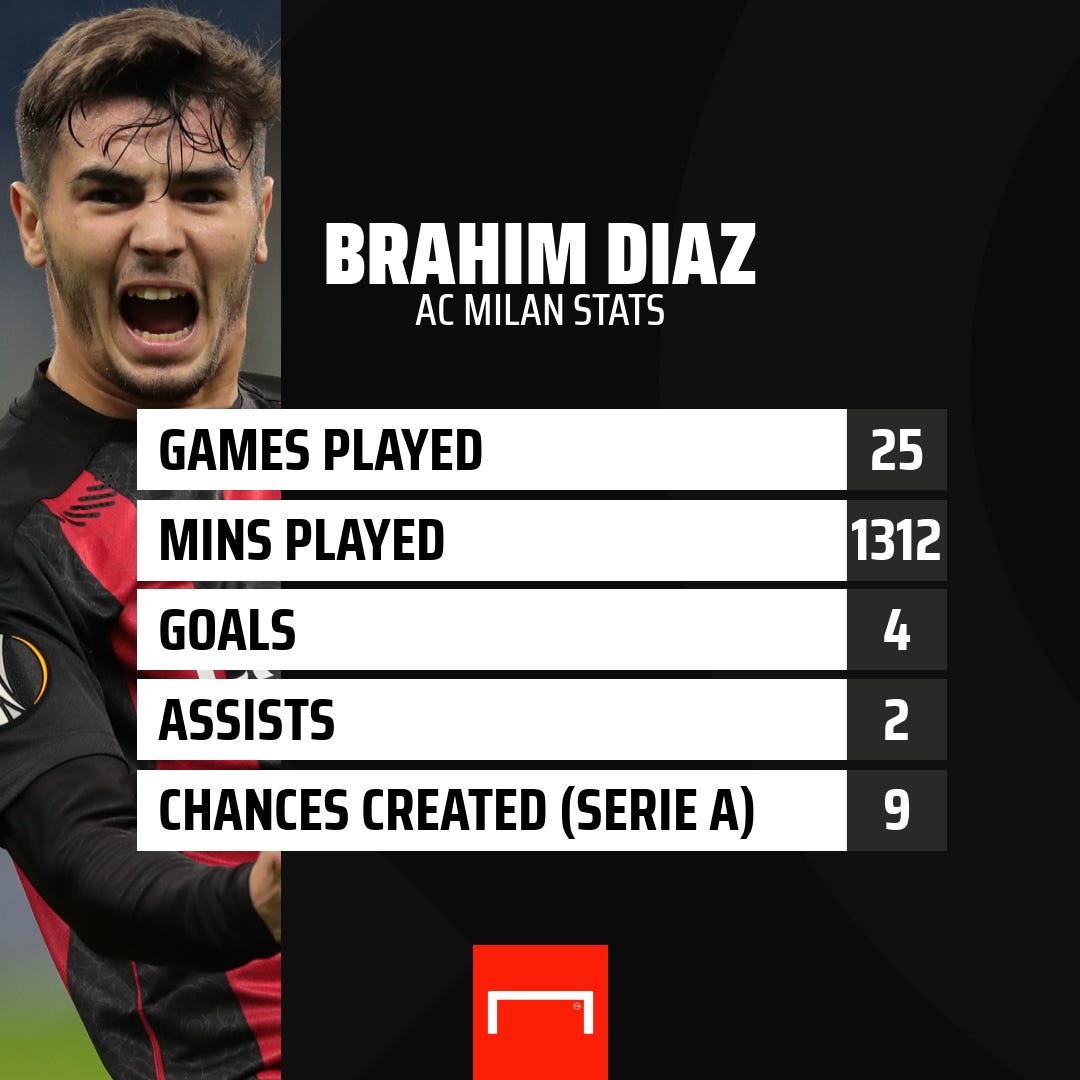 Why did Madrid loan him out?

Brahim joined Madrid from Manchester City in January 2019 although he was only used sparingly during his first two seasons at the club, making a total of 21 appearances.

With Zinedine Zidane's side already boasting an attack that includes Karim Benzema, Eden Hazard, Marco Asensio, Lucas Vazquez, Vinicius Junior and Rodrygo, the decision was made to ship Brahim out on loan for the 2020-21 campaign.

The plan was to make sure the Spaniard was given more exposure to first-team football in one of Europe's top leagues, with Milan proving to be a perfect fit.

Despite being moved out of Madrid on a temporary basis, Brahim has previously claimed to have a good relationship with Zidane, telling Movistar Plus in November 2020: "Zidane and I have a special and mutual affection. The relationship between he and I is very good. Now that I am in Milan, we have less contact, but from time to time I receive a message from him."

Milan have informed Brahim's family that they want to arrange a permanent deal for him, with Madrid likely to consider a sale for around €30 million (£26m/$36m).

The forward's progression in Italy has not gone unnoticed in the Spanish capital, although with very few in the Madrid squad seen as being essential to their plans, the finances on offer may force the Spanish club's hand.

There is also the future of Zidane, which remains uncertain, and any potential replacement for the Frenchman will have their own ideas and may not consider it worthwhile to keep Brahim around.

For now, though, there will not be any significant movement on transfers, with a decision not likely to be made until at least March.

Brahim, for his part, is likely to be in Spain's squad for the Olympics in Tokyo, where he'll aim to convince his employers that he is good enough to remain at Santiago Bernabeu.

Should the decision be made to move him on, however, then the former Manchester City forward, who is contracted to Madrid until 2025, would be attracted by the idea of extending his stay in Milan