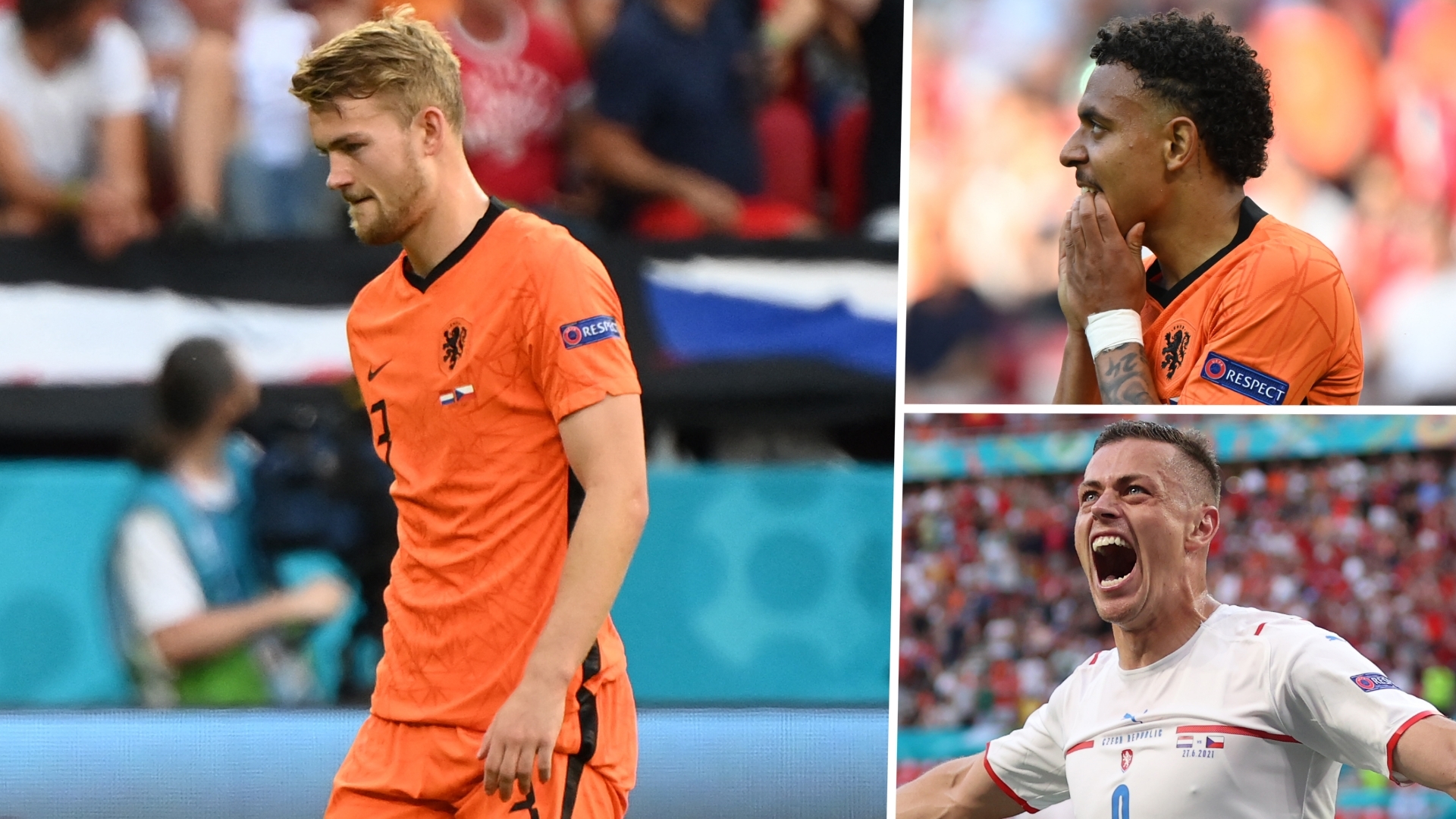 The defender saw red just moments after Donyell Malen had missed a chance to give the Dutch the lead, allowing Czech Republic to run out 2-0 winners

Frank de Boer had a clear image of what a successful Euro 2020 would look like for the Netherlands, and crashing out at the hands of the Czech Republic in the last 16 certainly was not it.

A disastrous 28 seconds early in the second half all-but condemned them to defeat in Budapest, with the Oranje's dream of lifting a first major trophy in 33 years ruined in the Hungarian capital.

The chaotic but entertaining manner in which they had topped Group C with a perfect record had prompted hope that, after missing out on even qualifying for last two tournaments, the Netherlands were back.

But at the first sign of coming up against any real threat, their limitations were exposed.

What had been an even game was blown wide open around 10 minutes after half-time.

Donyell Malen found himself with the freedom of the final third, only to fail with an attempted step-over as he looked to round Tomas Vaclik rather than take an early shot, which in turn allowed the Czech goalkeeper to smother the ball at his feet.

Exactly 27.92 seconds later, Matthijs de Ligt could only scoop the ball back with his hand as he slipped when attempting to stop Patrik Schick from having a similar opportunity at the other end.

Though referee Sergei Karasev needed to consult his pitchside monitor to come to the right decision, there was no doubt that De Ligt's moment of madness was deserving of a red card.

From there the dye was cast, and the Czechs ran out deserving 2-0 winners to book a quarter-final meeting with Denmark in Baku on Saturday.

Former Manchester United striker Ruud van Nistelrooy, who is now part of the Dutch coaching staff, had warned De Boer's players against complacency ahead of the game, but it did not appear that his message had got through.

There was a certain arrogance to their performance that suggested they believed they were already through, and potentially plotting a route to the final through what is, in no uncertain terms, the more favourable side of the draw

But for all that exciting attacking we saw in the group stages, the Netherlands failed to record a single shot on target here, the first time they had failed to do so in a game since November 2013 versus Colombia.

Denzel Dumfries - who will no doubt secure himself a big move this summer after his eye-catching tournament performances from wing-back - looked lively, as did Malen alongside Memphis Depay, but the Dutch flattered to deceive and did nothing to threaten Vaclik.

And while it is easy to criticise the Netherlands for their underwhelming display, credit should also go to a Czech Republic team who were well organised in defence and both compact and effecient on the counterattack.

For all their stellar names, De Boer's side did not have the quality or energy required to break them down.

"It was a poor display by the Netherlands. There was a lack of intensity, aggression and mentality,” former Netherlands midfielder Nigel de Jong said on ITV, and he was right.

Tomas Kalas and Ondrej Celutska were a wall at the back, and Tomas Holes won the battle in midfield against a disappointing Georginio Wijnaldum, who completed just 10 passes throughout the whole 90 minutes.

That this Netherlands side have only won once on the last six occasions they have fallen behind is telling, and not for the first time in this competition, De Boer's substitutions were head-scratching to put it lightly.

De Ligt’s red card should have inspired them to dig in and push for a goal, but their heads went down as the Juventus star exited the scene, and from there it seemed inevitable the Czechs would take the lead.

Their first came from the head of Tomas Holes after Kalas had nodded a free-kick back across the face of goal, before a well-worked move was finished off by Schick to seal the result with 10 minutes left on the clock.

And so while the Czech Republic partied with their fans at the Puskas Arena, the Dutch and their own 7,000 supporters were left deflated once more.

How they must rue that 28 seconds of madness.