While their second season back in the Premier League may be proving rather more underwhelming than they might have hoped, Leeds United still owe a sizeable debt of gratitude to manager Marcelo Bielsa for bringing the good times back to Elland Road.

The Argentine is renowned for getting the best out of his playing staff and he has proved as much by boosting the careers of countless stars over the years, from ex-Newell's Old Boys enforcer and current Paris Saint-Germain boss Mauricio Pochettino to Leeds' own England duo, Kalvin Phillips and Patrick Bamford.

But even El Loco might have been surprised to see the coach of his nation's arch-rivals Brazil singing his praises. Raphinha has enraptured fans back home with a scintillating start to international life – and according to Tite, one man is responsible.

"I publicly thank Bielsa for accompanying and working with Raphinha and all the coaching staff that brought him closer to the national team," he told reporters after the winger's two goals on his first-ever start helped sink Uruguay 4-1 on Thursday.

"I spoke personally with Bielsa and I thank him for that support with him."

The player himself wholeheartedly agrees with Tite's assessment. "Bielsa is a very dedicated and very demanding coach. He is a great professional and if the athlete knows how to absorb everything he goes through, he will certainly evolve a lot,” he told Globo back in September.

"From my first days here in Leeds, he received me really well and made me feel very comfortable playing my football."

Raphinha had earned his maiden Brazil call-up back in September, only to see his chances quashed by the Premier League's refusal to release internationals on the United Kingdom's Covid-19 red list. 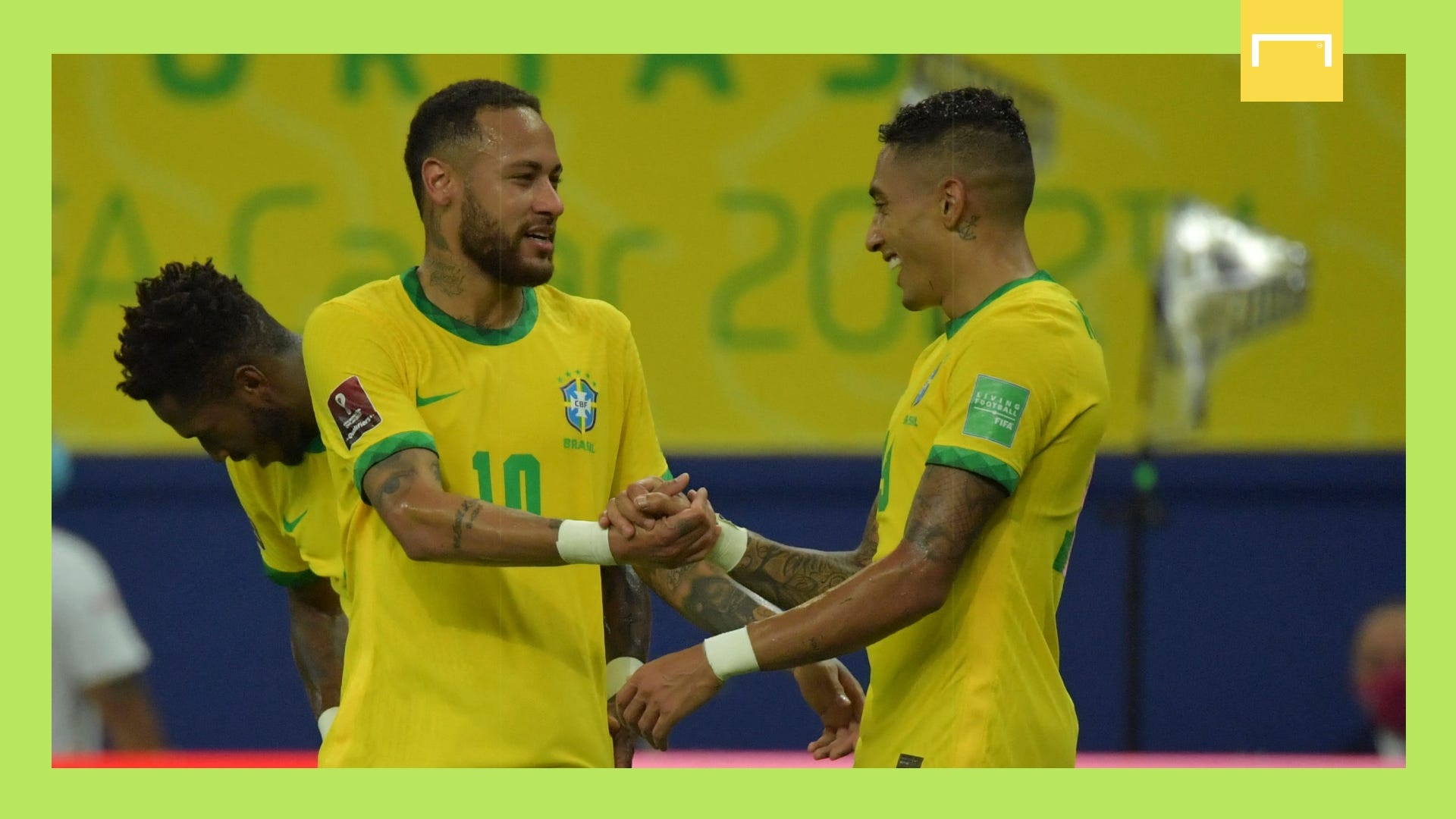 When he finally joined up with the likes of Neymar, Alisson and Gabriel Jesus in Tite's October World Cup qualifying squad, then, he was in no mood to squander further precious time.

His debut came at the start of the second half against Venezuela with Brazil trailing 1-0 in Caracas; in the proceeding 45 minutes he laid on two assists to see his side through to victory.

Three days later he once again started off the bench, this time against Colombia, and was the brightest spark by far as Brazil were held 0-0 to drop their first qualifying points.

Those two performances were enough to earn him a starting berth at home to Uruguay, and now it would seem that the roving spot on the right flank is his to keep just a year out from Qatar 2022.

More than his significant contribution in terms of numbers or results, it was the breath of fresh air Raphinha provided to Tite's under-pressure squad which has really set him apart.

Daring, stylish and willing to take on his marker time and again, the Leeds man was the perfect remedy to the malaise which has overtaken Brazil in recent years, where the side seem to grind out unconvincing victory after victory while never really satisfying their fanatical, ultra-demanding support.

The Selecao faithful want fireworks; they want tricks and spectacular goals; and Neymar for one might well feel that the suffocating pressure on his shoulders has been at least partially lifted by the emergence of another star who can make the ball do everything but sing when at his feet.

“It will be hard to forget this night,” the 24-year-old beamed after putting the Celeste to the sword.

“I wish it didn't ever have to end, but I will be going back to England focused on what put me here, which was my good work at Leeds, and I will keep working to come back again.”

Ironically enough, while Raphinha's star is rising inexorably the fortunes of the team which plucked him from relative obscurity last October, paying Rennes £17 million ($23m) for his services in what now seems an inspired piece of business, have taken a nosedive.

Saturday's timid 1-0 defeat to Southampton (without the resting Brazilian) was one of the worst performances of the Bielsa era, as the usually dynamic Leeds attack failed to muster a single shot on target while suffering constantly on the counter.

They now lie a lowly 17th just four points off the bottom of the Premier League table and with one solitary win in their eight games to date.

Whether Bielsa's men manage to turn the corner and recover from this dreadful start or not – and one should never be too quick to write off the veteran ex-Argentina, Newell's and Marseille coach, an expert at inspiring his troops – the Whites may soon have to prepare for a future without their Brazil international, who picked up six goals and nine assists in his debut Premier League campaign and is his team's top scorer this time round with three from his first seven games.

The prime candidate for his signature at this early stage dwells on Merseyside, having failed to land their man last summer.

"There are certainly many clubs interested in him," ex-Portugal international and Raphinha's agent Deco told Globo. "Liverpool do like him and there were some approaches, but nothing official. Leeds wanted to keep him for another season.

"Raphinha is happy at Leeds, but there will certainly come a time when he wants to take a step up in his career and move forward. He has three years left on his contract, but there's nothing in it that states how long he must stay for or that prevents transfers.

"Leeds are aware of that and will want to sell him for a big sum, while Raphinha will end up progressing in his career. He's ambitious to play at a higher level, despite Leeds being in the Premier League, but it's not the right time [to discuss that] and that's not what he's focused on. Things will take their course naturally."

There will likely be no shortage of suitors come the end of the 2021-22 season, and Leeds will at least have the consolation of demanding a transfer fee far higher than their original outlay last year in order to part ways with their star.

That said, Raphinha would be advised not to rush into a decision. His apprenticeship under Bielsa has yielded stunning results, with the winger learning to marry his natural ability with closer cooperation with team-mates and heightened threat in the opposition area.

Bielsa surely has a few lessons still to give before his or the Brazilian's time at Elland Road comes to an end, and if he continues to heed El Loco's words he has all the talent to become one of the world's elite attackers in the coming years.