To serve our Fatherland

With love and strength and faith

The labour of our heroes past

Shall never be in vain,

One nation bound in freedom, peace and unity."

These immortal words make up the first stanza of the Nigerian national anthem. The words are sung every morning by pupils in schools across the land; it is repeated in several government functions daily; radio stations, both terrestrial and online; and television stations, all gleefully give voice to this bold declaration, inviting listeners to sing along, and make the commitment.

The national pledge is no less demanding:  "I pledge to Nigeria my country/To be faithful loyal and honest/To serve Nigeria with all my strength/To defend her unity..." it requests absolute allegiance and absolute service, as it should from the Nigerian. What is missing, and what many present and past heroes of Nigerian football are pointing accusing fingers at, is the lack of any form of reciprocal commitment from the state, to the citizen.

Now, the question a curious reader may ask is: what has patriotism and nationalism got to do with the death of Rasheed Yekini? Why is the writer mixing football and the death of Yekini with politics, when all his life the gangling striker did all within his power to stay out of politics, and out of the public eye, when he is not indulging in the very public pastime that brought him fame?

The answer is simple: the circumstances are too unclear, the stories are too horrifying and Rasheed Yekini is too much a “one of us” for the matter to die unheralded like the former Shooting Stars striker. He fits nicely into that niche where he can claim to be a football celebrity, because of his massive achievements while representing Nigeria; and he can claim to be an ordinary citizen because of the simple life he chose to live when not playing football. He is the perfect specimen for any discourse that focuses on duties of citizens to the state, and their expectations from their government. And in this case, he is a “citizen” of both the Nigeria Football Federation, and the Nigerian state as a whole. Rasheed Yekini was a footballer; he was also a Nigerian and ultimately, both had roles to play as the drama of his life came to an end. The key question is: how well did these two authorities play that role?

The refrain since Yekini died has been that he was abandoned by the Nigeria Football Federation. That assertion is not totally true; several overtures were made to the late striker not only by the Nigeria Football Federation, but by foreign soccer bodies and media houses. He rebuffed them all. Some have also countered the argument that our former stars are abandoned by the NFF, with the rebuttal that these stars are very well compensated when in active service. This is also very true. Nigerian national team players earn one of the highest appearance fees in the world, but that does not negate the obvious failings that the NFF have demonstrated over the years. Many of which the body still actively ignore. 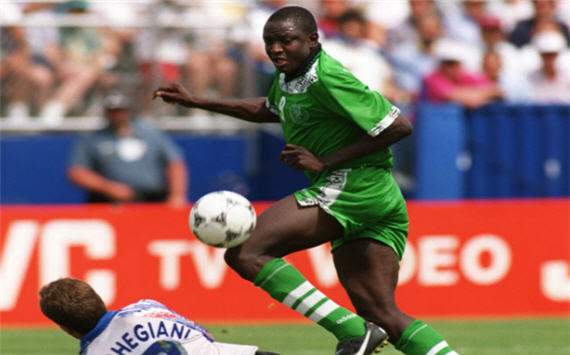 Yekini | His death still a mystery

We cannot deny that the NFF failed Yekini in a way: the absence of a virile players’ union means that there was no one to raise any objections when his night of the long knives came. The Footballers Union led by Harrison Jalla and Austin Popo: divided by the intense politicking that has ravaged Nigerian football, both bodies supported by different factions of the antagonists in the endless Nigerian football war; have both proved to be toothless bulldogs where the welfare of the Nigerian footballer is concerned.

If the NFF is playing its role right, and the body of those working in the Nigerian football system as major actors has adequate representation, then maybe somebody would have seen the tragedy we witnessed coming, and would have doused the flame before Yekini was consumed.

Alas Nigerian footballers, both past and present, have been reduced to pawns in an endless mini-political game, where those in charge of their welfare have a set goal: for the winner to amass wealth, to the detriment of the constituents they are meant to serve.

That is why the NFF stands accused, the association seems to have become a microcosm of the Nigerian State, taking the famous quote “ask not what your country can do for you, ask what you can do for your country” literally, and not for once consciously trying to reverse that saying. Maybe it is time for all concerned with running the Nigerian game to start thinking in the direction of how to be more relevant in the lives of our heroes past; beyond the fat bonuses they are handed while in active service.

The Nigerian police also failed Rasheed Yekini. Reports from Ibadan suggest that previous attempts were made to abduct Yekini from his home, and the police were aware of at least one of them. If indeed the police warned his family that they must contact the force before any further attempt must be made to spirit him away from the ancient city, how come a third attempt succeeded without them knowing? How come someone of Yekini’s status was shackled, bundled into a van and driven away in broad daylight?

This is where the words of the national anthem become a lodestone for some Nigerians: “to serve with heart and might” in return for what? This is one hero whose labour seems to have meant nothing. This is yet another ordinary Nigerian who seems powerless and voiceless in the face of everyday odds that authorities in the more advanced societies routinely deal with, barely causing a ripple. We try hard to emulate these societies with speeches, often failing to match these words with deeds, but rarely do we get a chance to remedy the failures that seem to be the constant results of these acts.

Both the Nigerian police and the NFF have a chance to end this gloriously. Whatever happens now, Yekini is lost to us forever. However, something can still be done to snatch a modicum of victory from the shambles leading to the passing of one of Africa’s greatest footballers.

Let us for once ignore the rumours about the state of Rasheed’s mental health, because that is what they were: mere rumours. The only time his family came with constituted authority, the late Yekini proved lucid in the presence of a high ranking police officer.

If that be the case, his abduction is at best an assault on his person, at worst a premeditated criminal act, and both are within the purview of the police to investigate.

The association that caters to the welfare of Nigerian footballers, both past and present must be, as a matter of urgency, re-organized and empowered. It is unrealistic to expect the NFF to take care of the private welfare of active players off the field, as effectively as it does on it. This must be one of the major concerns of the footballers’ union.

In the same vein, the NFF cannot be the welfare officer of past heroes, the job is simply too complicated with all the logistics involved. This is why the NFF must do all within its power to ensure that the politicization of the footballers union is stopped forthwith.

If this is done, then Yekini would not have died in vain, and then just maybe that line:

“The labour of our heroes past/Shall never be in vain”, would sound true, a last act of service by a great Nigerian football hero.