Solace Chukwu
It's been 20 years since Nigeria's football team made Olympic history but the memories remain as vivid as yesterday for a nation that, in the midst of misery, remembered what it...

There are effectively two eras in Nigerian football: before 1994 and after; the former corresponding to a virtual Dark Age, and the latter, the summer of 1996 especially, to the Renaissance.

The promise and excitement of the 1994 World Cup in the USA had been truncated in rather anticlimactic circumstances in the Round of 16 by eventual finalists Italy, leading to the exit of Dutch coach Clemens Westerhof. His assistant stayed on within the set-up though, and two years later, when Nigeria made a return to the Land of the Free and the Home of the Brave, Jo Bonfrere held the reins.

Significantly, Nigeria’s team for the 1996 Olympic Games in Atlanta contained more than a few players who had either graced the World Cup or had been within the set-up. Notably Uche Okechukwu, who had taken over captaincy of the senior national side, was drafted into the centre of defence, a concession granted during the Olympics for three players over 23 within each squad. 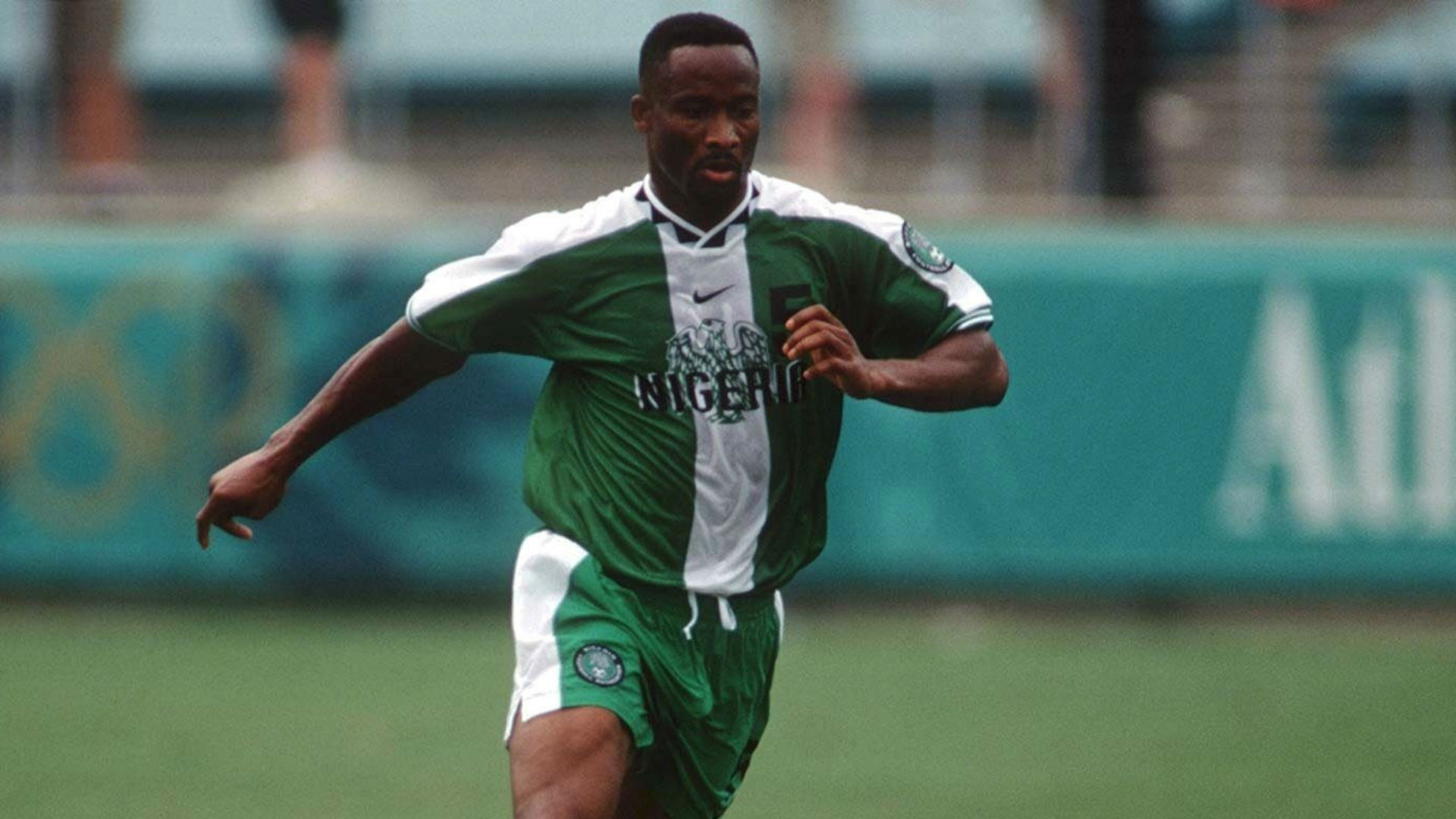 The likes of Sunday Oliseh and Jay-Jay Okocha had also featured, and had been key protagonists in that agonizing extra-time loss to the Italians. Emmanuel Amunike rounded out the veteran complement.

There was also a frisson of talent drawn from the U-17 side that had won the World Cup in 1993, and it was from that crop that a legend was born: Nwankwo Kanu, lanky, dainty as a pelican and with a touch like velvet.

Wilson Oruma was a fine midfielder, and had finished tournament top scorer in Japan, while left-back Celestine Babayaro proved surprisingly prolific, aiding the cause with two crucial goals at the business end of the Olympics. 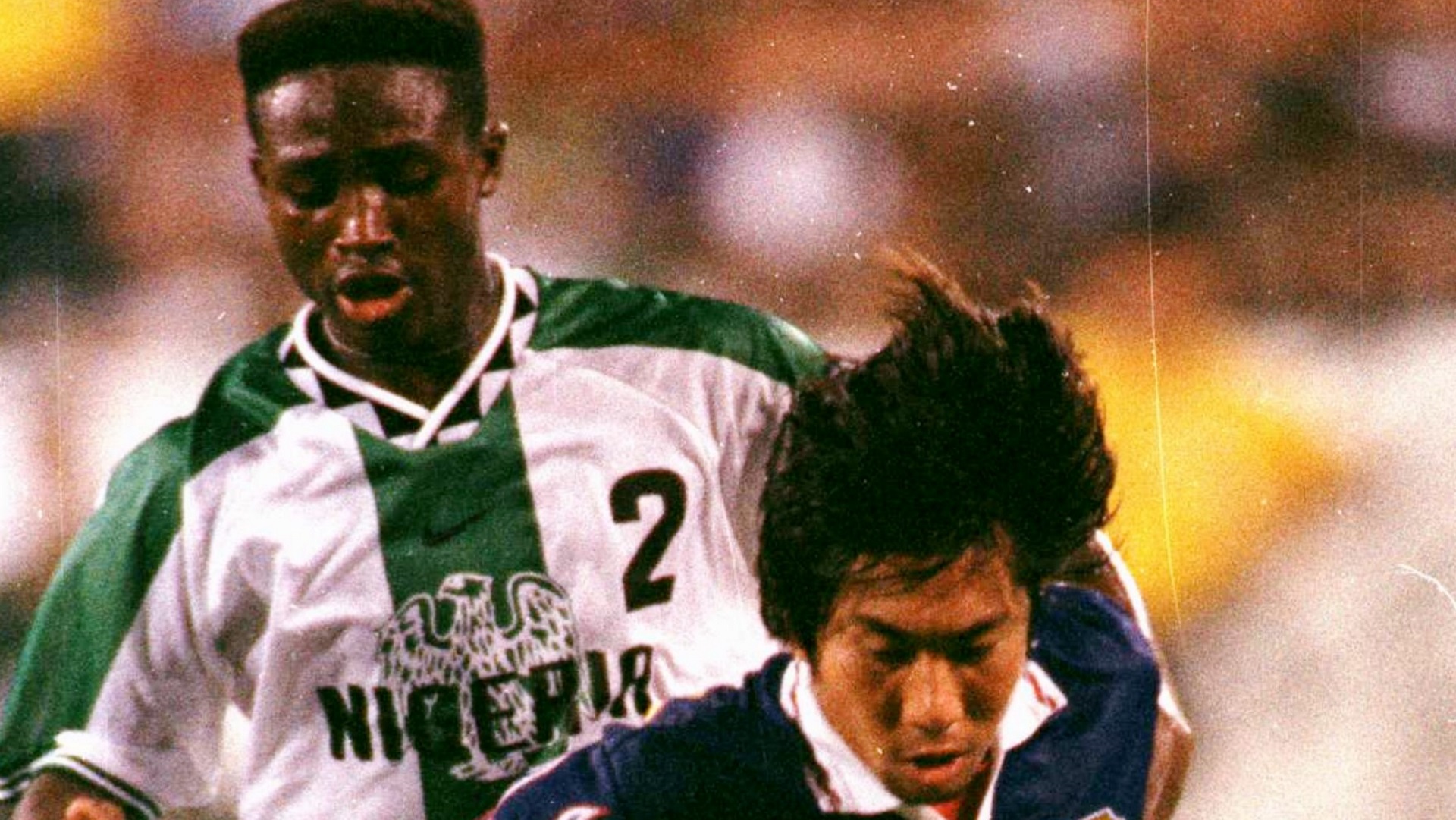 This collision of two generations could have led to some friction and uncertainty (ultimately it would, two years on); instead, there was a synergetic fusion, from which Nigeria’s greatest footballing moment was sired.

A kind group stage draw helped immensely: Hungary would finish the tournament as the lowest-ranked team, but Kanu’s goal just before half time was all that separated both sides.

They also made heavy weather of Japan, only going ahead with eight minutes of normal time to play thanks to Tijani Babangida’s arcing run in behind. Okocha made certain of the points, but not before getting penalized for his stuttering run-up from the penalty spot. 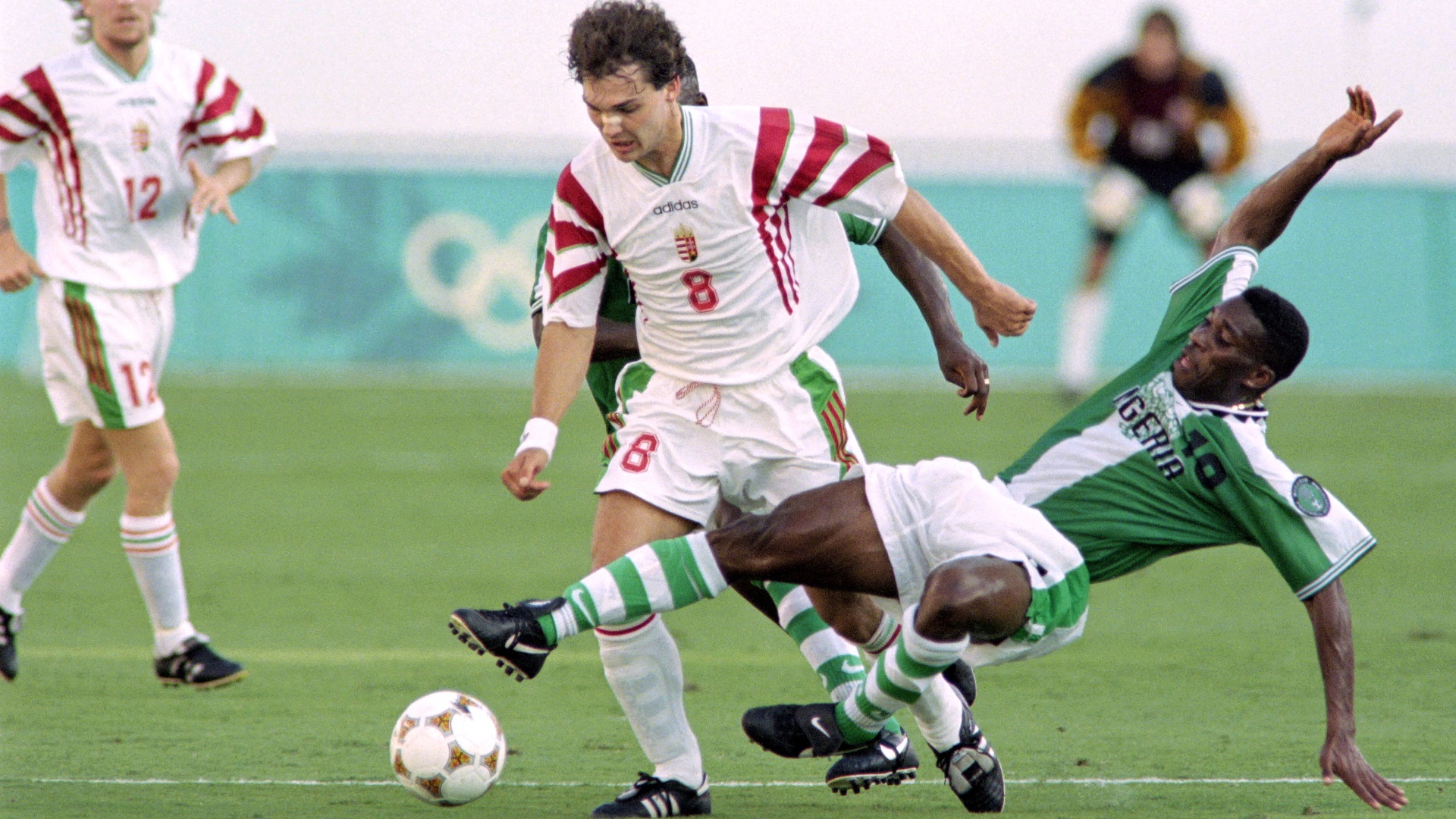 Two games, three goals, six points. It hadn't been pretty, or particularly explosive, but it had been efficient. The final group game against Brazil was essentially a dead rubber, informing Bonfrere’s decision to rest Babayaro. Mario Zagallo’s side needed a win though, and Ronaldo’s goal on the half-hour mark proved enough. Both teams would renew hostilities two games later.

If there was any inkling of a run to the final, it was being very furtively obscured from view. The partnership of Kanu and Daniel Amokachi upfront was hardly setting the tournament alight; Amunike had starred at the World Cup but had been substituted in every game—Bonfrere seemed to be riffling through his forward options.

It's been 20 years since #Nigeria won gold at the Olympic Games #Atlanta96. Do you remember these names? Get to meet some of those heroes at #smwfootballday #SMWLagos2016

The quarter-final against Mexico proved rather less nervy, as Okocha opened the scoring after 20 minutes with a scud missile from outside the area. Legendary Mexican goalkeeper Jorge Campos again had no answer when Babayaro pounced on a loose ball in the area and slammed home to make the result safe.

Beyond this point, there seemed a shredding of the fabric of logic and reason, and an embracement of chaos. Four games had seen five goals scored and one conceded, the partnership of Okechukwu and the dreadlocked Taribo West seeming watertight. It was a bubble that was about to be not so much burst as pulverized. 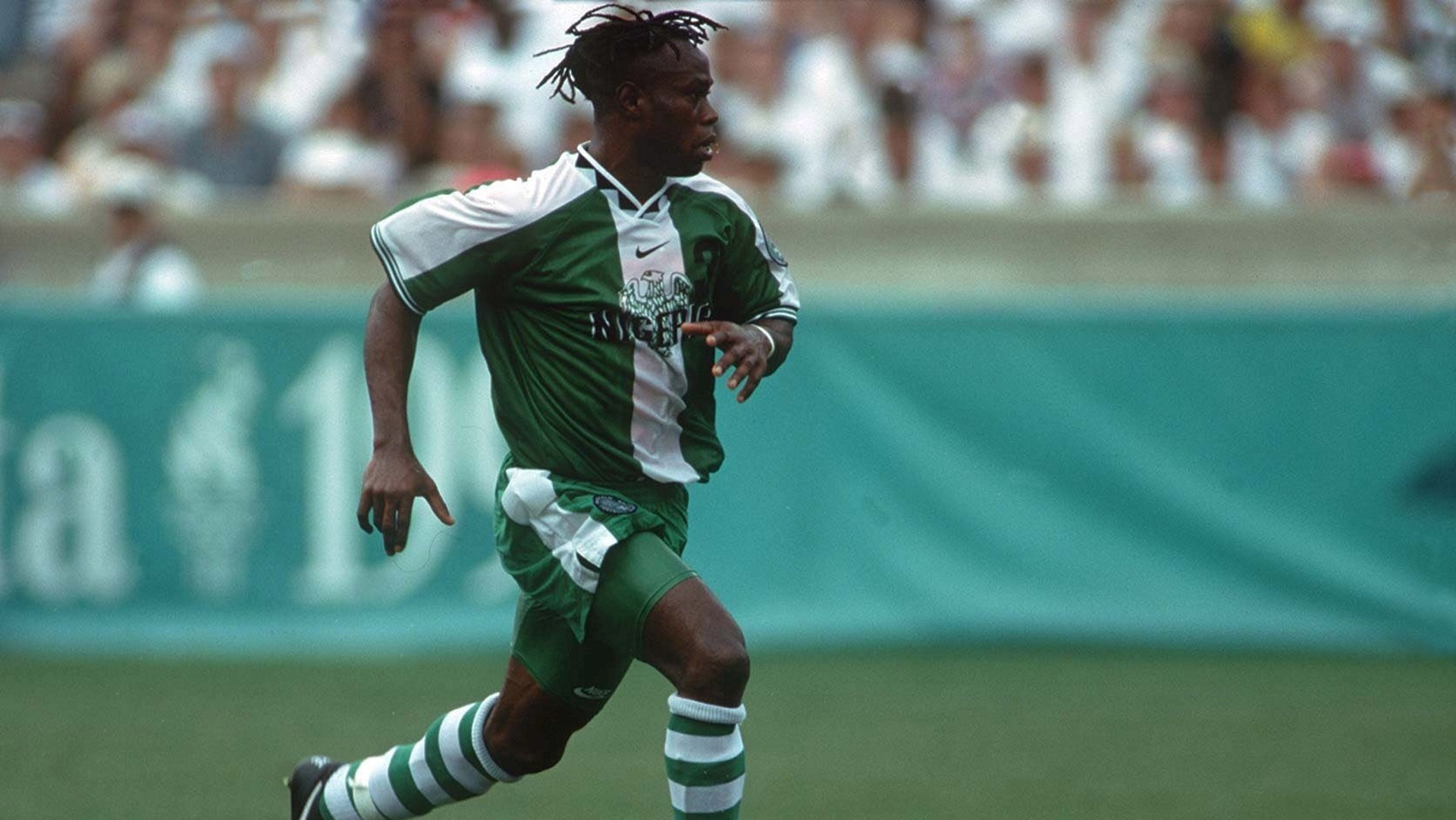 The semi-final against Brazil proved the complete opposite of the tame, nervy game from Group D, both teams displaying their strengths and limitations in equal measure.

Crucially, the Dream Team were without midfield enforcer Oliseh through suspension, an absence that would almost come to define the tie. The Seleçao were quickly into the lead, as Flavio Conceicao’s first minute free-kick took a nick off the wall and flew past Joseph Dosu in the Nigerian goal.

The partnership of Ronaldo and Bebeto upfront was causing Nigeria no end of trouble, but there was brief respite when a switch of play found Babayaro one on one with his marker. His fizzing cross-shot was turned into his own net by Roberto Carlos.

From that point in the 20th minute to the final 15 minutes was unalloyed pain. 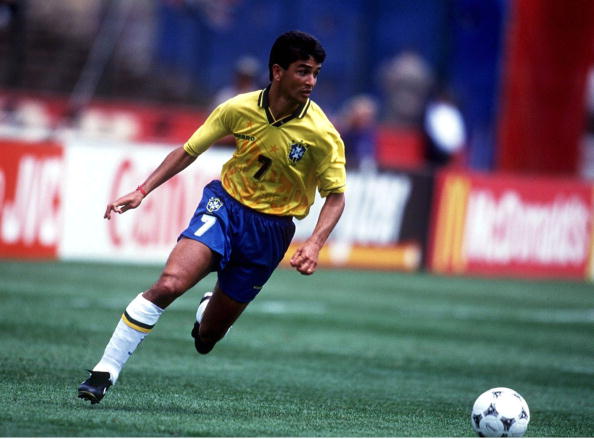 First Bebeto tapped in after Dosu had got a hand to Ronaldo’s shot, and then Conceicao got his second of the afternoon after a quick one-two on the edge of the box.

Brazil were almost toying with their opponents now, cutting the defence to ribbons almost at will; indeed, the 3-1 scoreline induced a peculiar complacency in the South Americans.

The overworked and under-skilled Garba Lawal had spent the first half chasing shadows in the centre of the park, but found more time and space as the intensity dropped. Victor Ikpeba, on as a sub at the break, struck back on 78 minutes, sparking one of football’s most memorable one-man sorties.

The tie would turn on Kanu’s brace as decisively as he spun on his heels for the first, seizing on a scramble in the box to smuggle the ball past a crouching Dida. There was no sleight of foot to the second though, an emphatic finish on his weaker foot, a golden goal that paved the way for a gold medal. 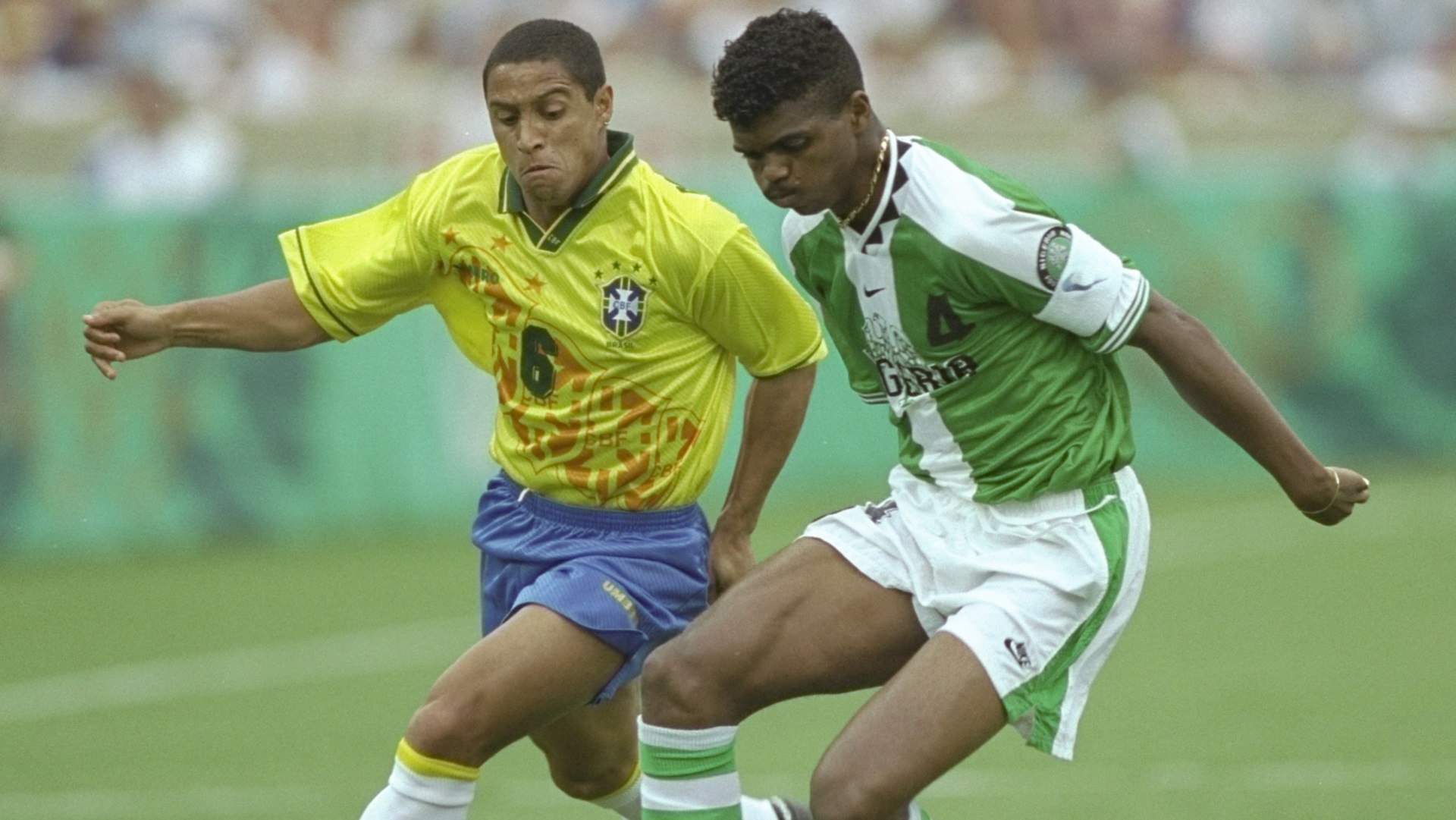 To win against Brazil was splendid. To do so in a seven-goal thriller, having been two goals behind for over 50 per cent of the tie was surreal, and spawned some of the iconic images of that summer: Bebeto, teary and in abjection; Kanu, eyes closed in rapture, arms raised triumphally.

Against this backdrop of euphoria, the final against Argentina felt almost like an afterthought. 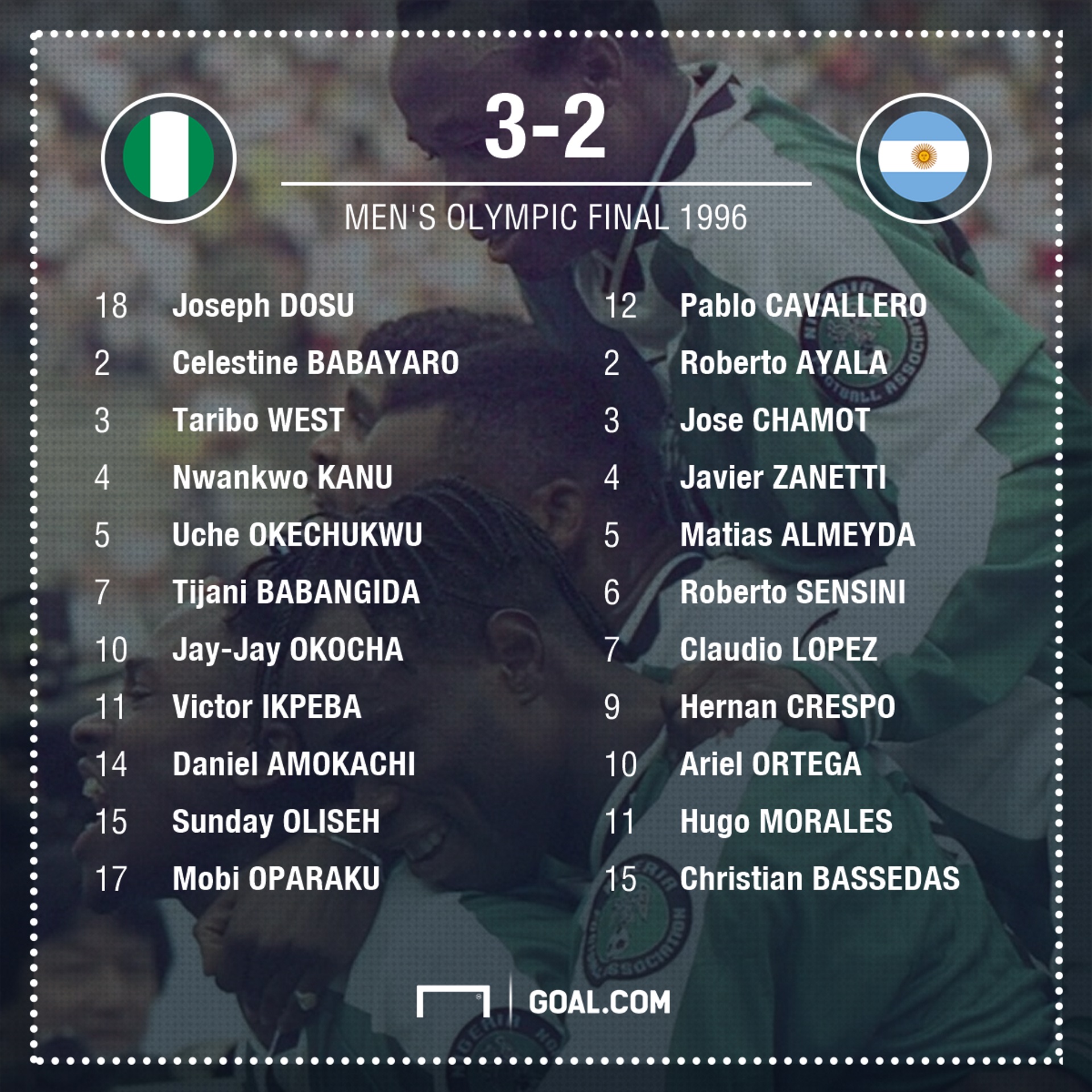 Claudio Lopez headed the Albiceleste in front after three minutes, but again Babayaro was involved in the equalizer, heading home from a corner. Both teams traded goals once more, before late drama once more swung the tie in Nigeria's favour. 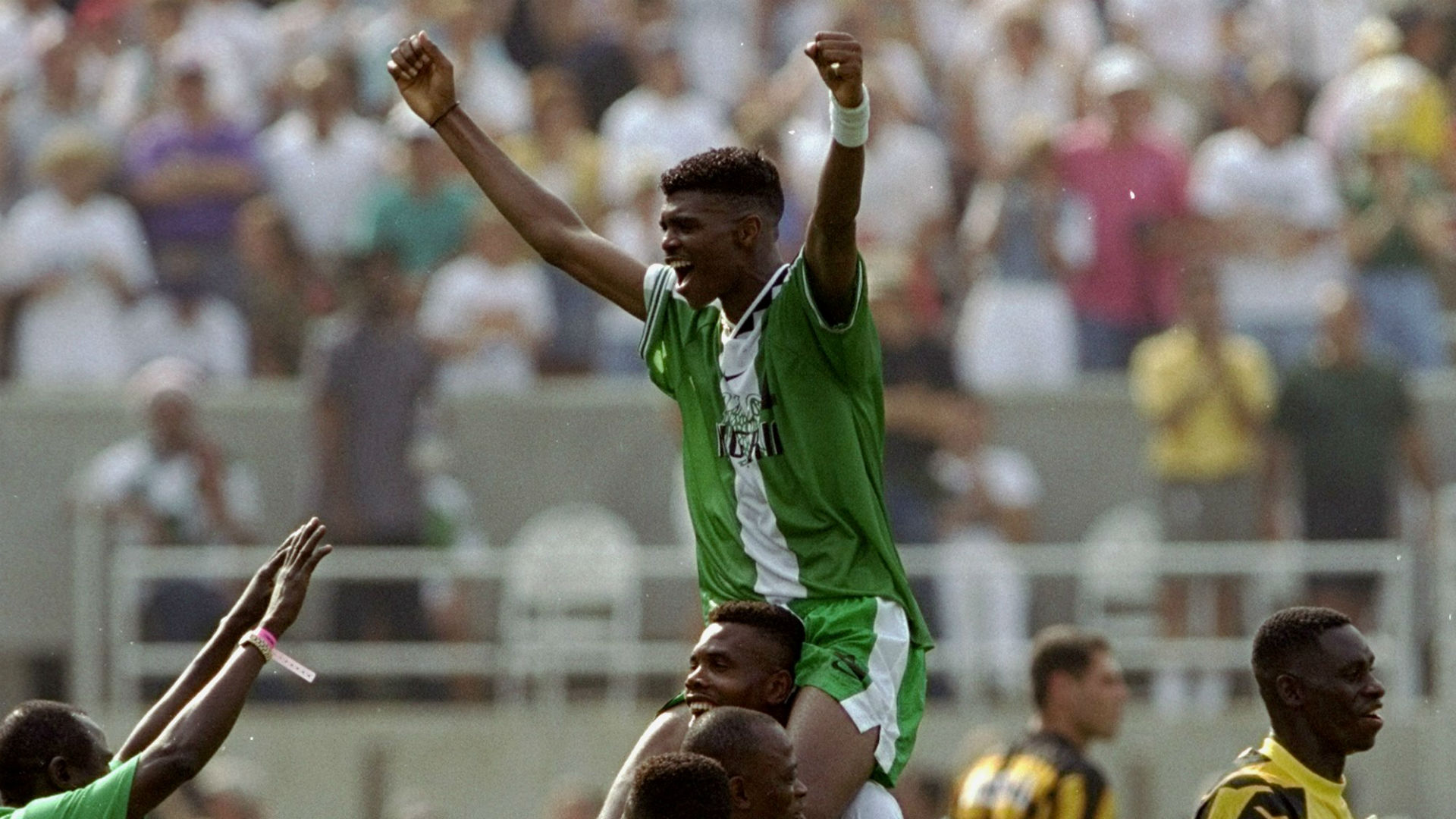 Bonfrere had elected to drop Amunike for the final, starting Ikpeba instead. However, the veteran made the difference at the death off the bench, beating the Argentine offside trap to volley home the winner from a free-kick.

The bulk of this team would progress to the senior national team and headline the World Cup in France two years later, but that summer in 1996 proved the true highlight for many of them. 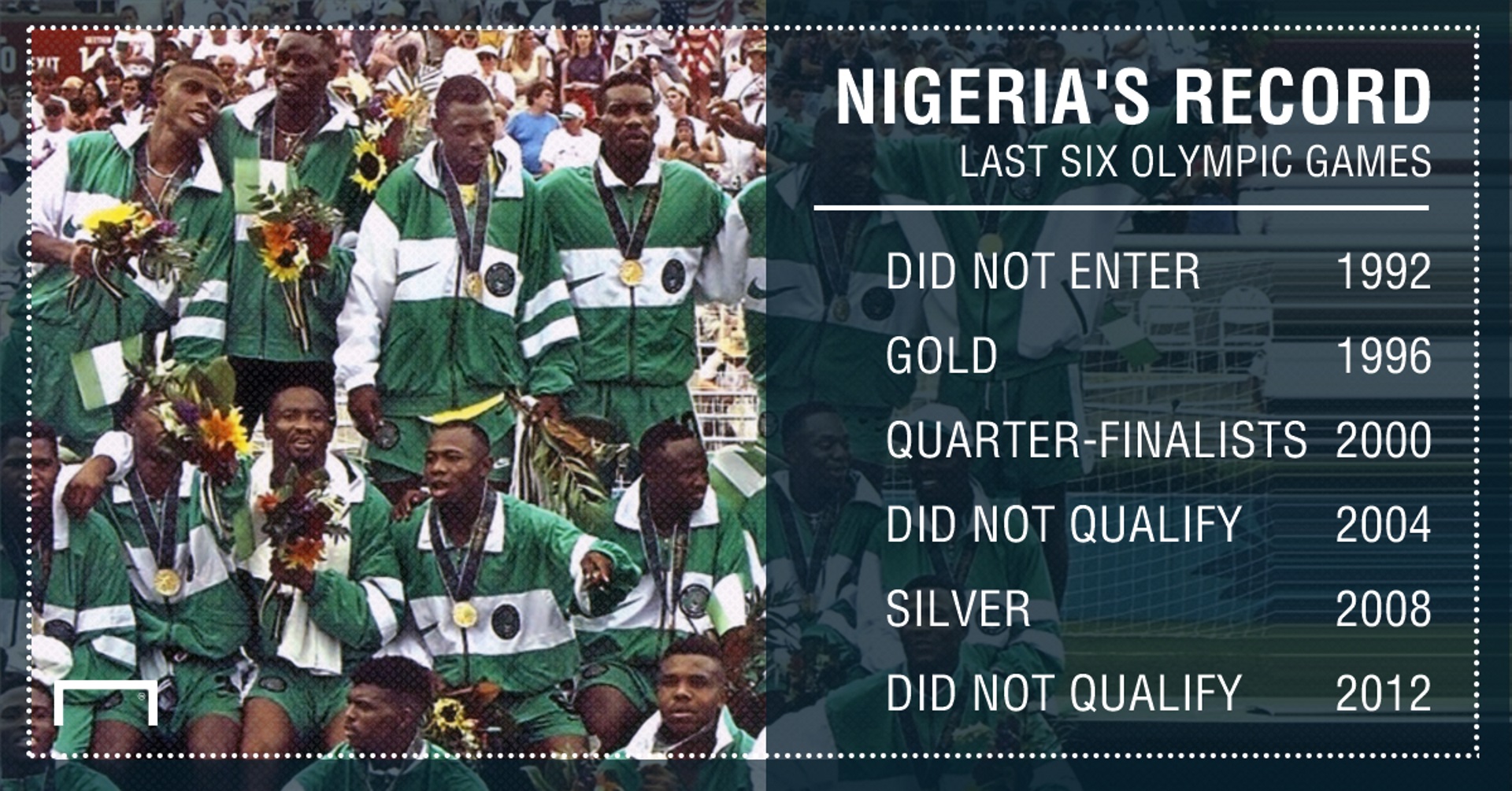 There is a school of thought that posits that Olympic success led to a decline in the national team. The view has some merit: there was a break in continuity from Westerhof’s team in 1994, brought upon by the Super Eagles’ absences from the 1996 and 1998 Afcons, which was exacerbated by this “new” group.

Shame we were robbed of Finidi's peak due to the Afcon misses in 96 and 98. Makes you want to punch something. Happy birthday, legend.

However, in the middle of a bleak and repressive military junta, when dissent and free speech was swiftly punished, the visceral joy of Atlanta '96 transcended football.

For that one summer, it gave an entire nation the one thing no dictatorship could take away: the power to dream.