The Gunners are willing to pay Real Madrid's €25 million valuation for the Germany World Cup winner but have been put off by his request for a basic salary of €250,000-per-week
EXCLUSIVE
By Wayne Veysey | UK Correspondent

Sami Khedira's wage demands are currently pricing him out of a move to Arsenal, Goal understands.

The Gunners are willing to match Real Madrid's €25 million valuation of the World Cup winner, who has just one year remaining on his contract with the Spanish giants.

But Arsenal have baulked at Khedira's salary demands, with the Germany midfielder pushing for a basic €250,000-a-week deal plus bonuses.

This would make him comfortably the highest-paid player at Emirates Stadium and smash the wage structure in place for the club's A-list players.

The top earners at the club are Mesut Ozil and new signing Alexis Sanchez, who both earn a basic €160,000-per-week, while Aaron Ramsey's new contract lifted him to €140,000-per-week. 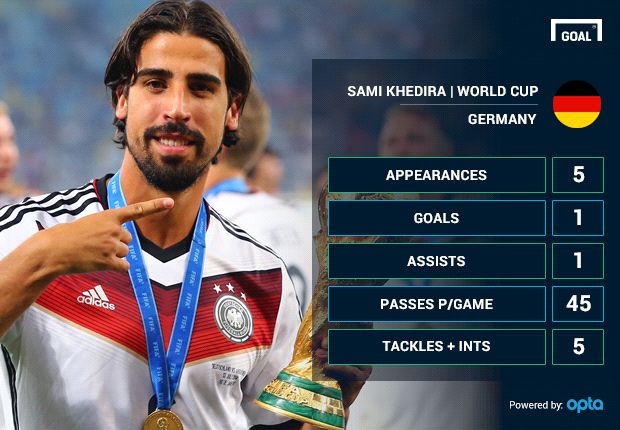 Arsenal have been in recent contact with Madrid about signing Khedira but a deal is unlikely unless the midfield anchorman considerably reduces his wage expectations.

The Champions League holders have failed to make any headway in agreeing a new deal with the 27-year-old, and are prepared to sell now rather than let him leave for free at the end of next season.

Arsene Wenger is ready to pursue alternatives as he bids to recruit a proven midfield anchorman this summer, with Southampton's Morgan Schneiderlin among those admired by the Arsenal manager.

The Gunners are also in the market for a forward, a back-up goalkeeper, a centre-back and a deputy right-back as they prepare to send Carl Jenkinson on loan for the forthcoming season.

Arsenal are expected to announce the signing of Mathieu Debuchy from Newcastle United on Tuesday after the Tyneside club reached an agreement with Feyenoord for the Frenchman's successor, Daryl Janmaat.

Debuchy, who completed his Arsenal medical and official club pictures on Monday of last week, will join for an initial €10m plus appearance-related add-ons.
Close