By Xuan Thanh & Erick Bui
In an all new series, our team of experts cast studious eyes over five outstanding South-east Asian Clubs and in this edition, we take a look at Hoang Anh Gia Lai of Vietnam
In football, success on and off the pitch is not only down to sheer talent and tactical genius. It requires years of meticulous planning throughout the structure of the football club.

So, we at Goal.com, will be selecting and presenting a statistical as well as structural evaluation of five top clubs in the South East Asian region and would try to draw a verdict on why these teams are heads and shoulders above the rest. In this edition, we take a look at one of the most prestigious clubs in Vietnam, Hoang Anh Gia Lai.


Founded in 2002, Hoang Anh Gia Lai (HAGL) is a professional football club based in Pleiku in the Central Highlands of Vietnam. HAGL, also known as ‘Wood’, is a club with an illustrious history.

As soon as the club gained promotion to the V-League in 2003, it won two consecutive league titles in 2003 and 2004 as well as two Vietnamese Super Cup titles in 2004 and 2005. During its prime, the club could boast of its dream team which was made up of top players from Vietnam and Thailand - including Thai legend Kiatisuk Senamuang. Other famous players such as Van Sy Hung, Datsakorn Thonglao, Lee Nguyen and Kesley Alves also ploughed their trade at the club. Despite the recent trophy draught, HAGL is always known as one of biggest and most ambitious sides in Vietnam.

On the international stage, HAGL made appearances in the AFC Champions League in 2004 and 2005 but failed to advance from the group stage. The club also finished third in the ASEAN Club Championship 2005. 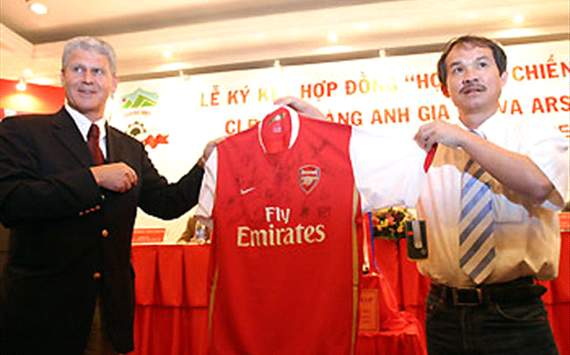 Besides Arsenal, the Laos Football Federation is also a big partner of HAGL. The club usually offers support to the Laos national football teams of all age groups by arranging friendlies and training camps in Ham Rong Sports Training Center. Moreover, as the reformed Laos Football League gears up for a kicks off in 2013, Hoang Anh Attapeu, an affiliated club of HAGL, will make its debut. Based in the Attapeu province of Laos, Hoang Anh Attapeu shares the same owner as HAGL. Top further strengthen the close relationship of both clubs, some Vietnamese and foreign players and staff  were loaned to the Laotian club. 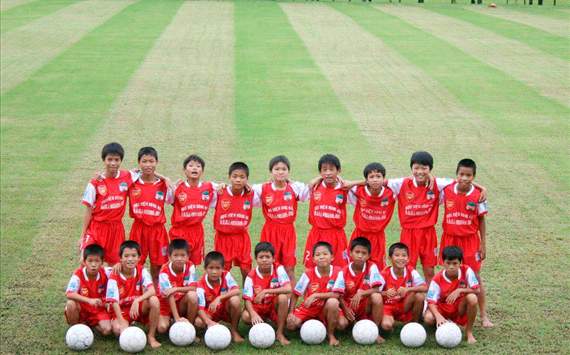 The partnership between HAGL, Arsenal and JMG Academy led to the establishment of HAGL Arsenal JMG Academy. Since its birth in 2007, the academy has organised two recruitment periods in various parts of the country. The second drafting event, which was held in 2009, saw almost 10,000 U-13 boys participate - only 10 were selected. Under the guidance of French coach Guillaume Graechen, 27 youngsters are training at the academy at present. Last December, four of the best young players were sent to train with the Arsenal U-18 squad. Players in the first grade of the academy are expected to graduate in March 2013 and will represent Vietnam in the International U-19 Tournament in Japan later that month.

In an exclusive interview, Huynh Mau, the CEO of HAGL, told Goal.com Vietnam: “Our target is to win the V-League and National Cup titles in 2013. We are also aiming for good results in youth competitions.

Moreover, HAGL are preparing for the third recruiment period of HAGL Arsenal JMG Academy which is scheduled for May 2013.

Regarding the first class of the academy, we will send them abroad for many training drills. We are also happy that these young players will represent our country in the upcoming International U-19 Tournament in Japan.

Our long-term goal is to become the number-one club in Vietnam and gradually join continential competitions.

We will continue to invest in the youth system with the aim of providing best home-grown players to senior team as well as our partners. Hopefully, many of them will become key players of national team in near future.”


Backed by the famous business tycoon, HAGL possesses the finances to develop the club further. Instead of rushing into mega-money transfers, HAGL have given a significant investment into the youth system and thus, building a strong foundation for future success. While many Vietnamese clubs are severely hit by the economic recession, ‘Wood’ are still making constant and solid progress.

Besides the club's efforts in the youth development, HAGL proved their ambition this season with the signing of 2007 FIFA U-17 World Cup champion, Ganiyu Oseni. The improvement of the current squad, the introduction of new young talents and the positive impact of new recruits would make HAGL a serious contender for titles. At this rate of progress, there’s strong belief that ‘Wood’ will fulfill their goals in the near future.