Out of the Champions League, out of the title race? Man City’s early season crisis continues with historic Arsenal defeat 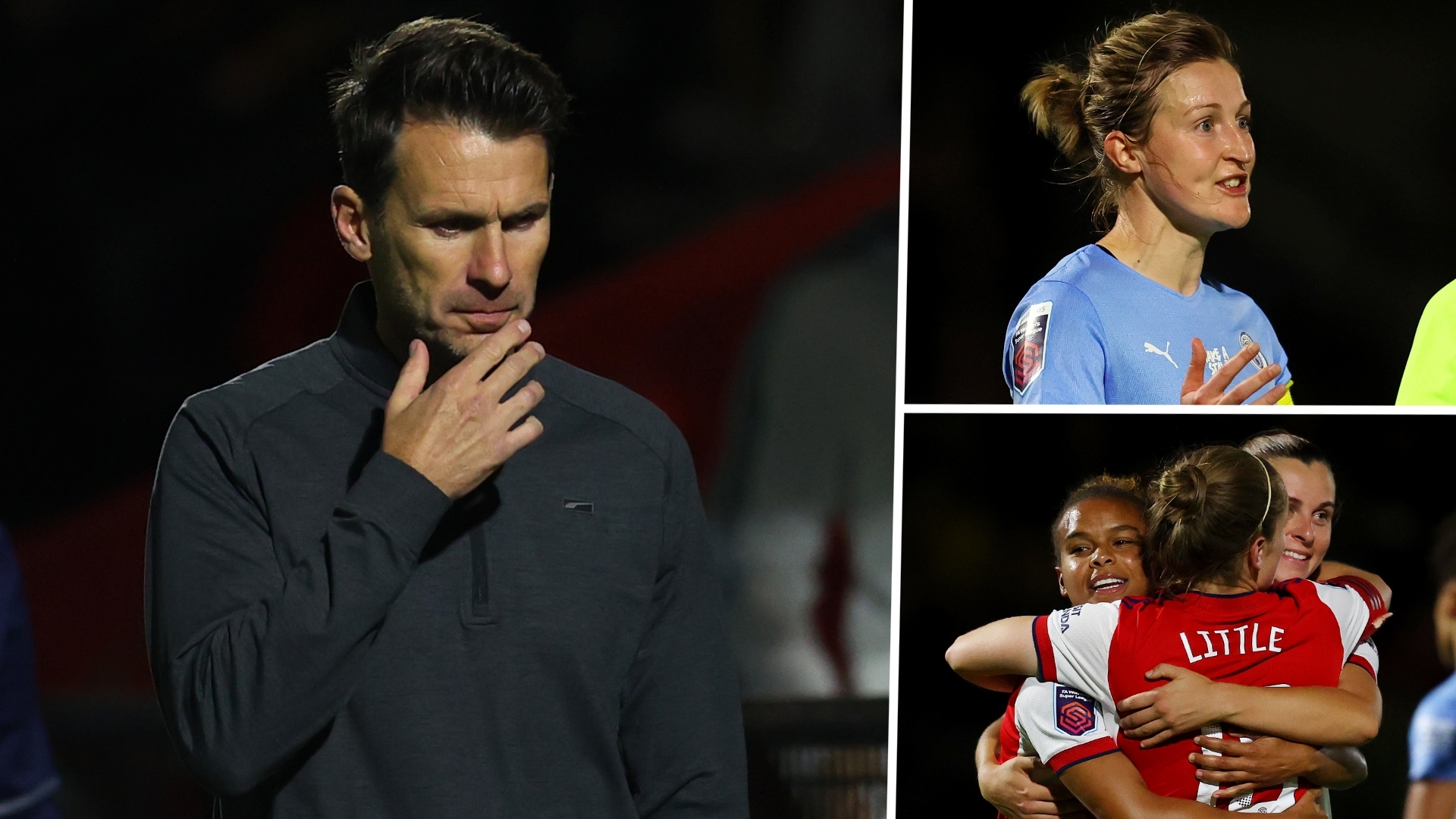 The Citizens suffered a 5-0 defeat to their Women's Super League title rivals on Sunday, their biggest loss since they became a professional team

When Arsenal’s substitutes were warming up at half time on Sunday night, it was almost as if they were gloating.

Leading 2-0 at home to title rivals Manchester City and on their way to a crushing 5-0 victory, a two-time World Cup winner, Tobin Heath, the former record goalscorer in the Women’s Super League, Nikita Parris, and another World Cup winner, Mana Iwabuchi, were among those kicking a ball around the pitch at Borehamwood.

On the other side of the halfway line, City had six substitutes, an ongoing injury crisis meaning they were unable to fill the bench with nine players.

Not among those six, nor the starting line-up, was their captain, Steph Houghton, full-back Lucy Bronze or midfield lynchpin Keira Walsh, three of their most crucial players and personalities.

It showed, too. Defensive errors characterised the heaviest defeat City have ever had as a professional team.

Those Injuries, coupled with missing Olympians and late transfer window arrivals, had already impacted their pre-season preparations and contributed to their exit from the Women’s Champions League in the second qualifying round to Real Madrid.

Katie McCabe makes it 3 for Arsenal!

You'd have to say that's game over.

Now, with the injury list still consisting of eight big names, it may have led to their title race being over before it had begun.

That may seem like an early statement to make, but this result at Arsenal followed a shocking, albeit controversial, defeat to a Tottenham team that finished six places and 35 points below City last season.

If a team is to win the WSL title, it is imperative that they drop as few points as possible against those below them.

After that loss, head coach Gareth Taylor said: “We need to be pretty flawless for the rest of the season.”

Asked where defeat to the Gunners leaves them now, he said: “I don't know, I can't really focus on that. I think we need to start putting some wins on the board, no doubt about that.

“I've spoken about this league and the need to be pretty flawless in the majority, but I think, apart from Arsenal and Spurs, everybody's dropped points.

"At the end of the day, we have to be concerned with what we do. We're not in a good moment, like I said, and we need to start putting some wins on the board.”

The difficult moment that City find themselves is not only about injuries and a lack of match sharpness. It is also about the understanding and chemistry in the team.

On Sunday, Georgia Stanway, an attacking midfielder, played at right-back. In midfield, Laura Coombs filled the shoes of Walsh. Coombs showed her quality as a box-to-box midfielder last season, so much so that she won an England call-up. However, the deep-lying role is less suited to her strengths and, admittedly, completely new to her.

This was a team of players that just was not on the same page at times, and injuries forcing them to have players in unfamiliar positions was never going to help.

When forwards came deep for a short pass, those further back were playing a ball in behind. The defensive error for the first goal on Sunday also showed as much, too.

Arsenal, on the other hand, have had quite the opposite start to their season and find themselves with highly contrasting fortunes.

An early start to the season due to extra UWCL qualifiers has afforded them the matches to adapt to the style of their new head coach, Jonas Eidevall, while also gathering momentum.

They have now won all seven of their competitive games this season, conceding two goals and scoring 26. The team is oozing with confidence, evident in their free-flowing football.

City looked quite the opposite on Sunday. After the second goal went in, there was an air of deflation. They have now lost three games in a row and there are big personalities missing to ensure heads do not drop.

Much can be said of City’s preparation for the season but, right now, moving forward, there is nothing much they can do other than try to get players back fit and hope that with games, that understanding will develop.

They hit obstacles in the early stages of last season – losing to Chelsea after dropping points to Brighton. However, they went on to lose the title only narrowly to Chelsea in the end.

Those setbacks were nowhere near as big as these, but it will at least give the team some positive experiences to draw on.

“I'm always pretty comfortable that we'll arrive in the right moment,” Taylor said on Sunday, concluding his post-match press conference with an air of optimism.

“We just hope that is not too late in the season.”