When Martin Braithwaite joined Barcelona, Lionel Messi's genius didn't come as much of a surprise. He'd been marvelling at the Argentine's vast array of skills for years. The Dane was, however, dumbstruck by Ousmane Dembele.

"I have never seen someone with his talent. I’m serious!” Braithwaite told Tot Costa. "Leo Messi is something else but, after him, I haven’t seen any player like Dembele. The boy is special."

That much has been evident from the moment Dembele broke into the Rennes first team all the way back in 2015. Former Manchester United defender Mikael Silvestre was the club's sporting director at the time and he admitted that he had not come across such a talented teenager since Cristiano Ronaldo, whom the Frenchman had watched first hand take the Premier League by storm.

Dembele did something similar in the Bundesliga, after moving to Borussia Dortmund on the back of just one full season in Ligue 1. Nonetheless, eyebrows were raised when a shell-shocked Barcelona – still reeling from Paris Saint-Germain buying out Neymar's contract – elected to replace the Brazilian with Dembele.

His enormous potential was obvious. However, the fee (an initial €105 million) was staggering.

It was a huge amount of pressure to place on a kid, particularly one that was rumoured to be even more immature than most 20-year-olds. Indeed, it wouldn't be long before Dembele's behaviour became a major cause for concern at Camp Nou. 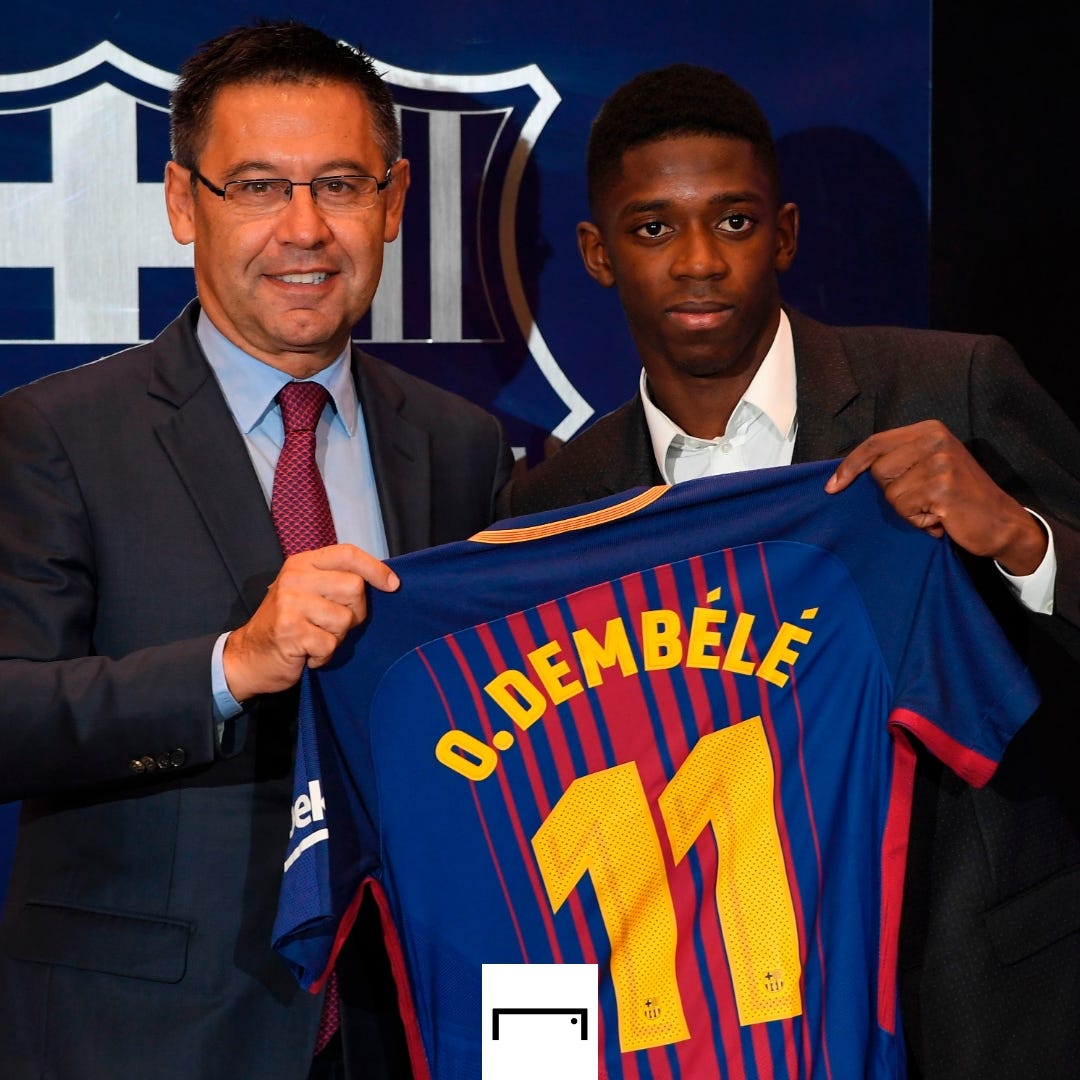 As GOAL first reported back in October 2018, Barca even considered cutting their losses on their enfant terrible during the January 2019 transfer window.

Their frustration was understandable. On top of his tardiness, there was a general lack of professionalism that Barca believed was contributing to his incessant injury issues.

"It's a messy life," the player's former chef, Michael Naya, told Le Parisien. "I've never seen alcohol but he doesn't respect the rest periods at all. There's no structure around him."

Consequently, Dembele got stuck in a vicious cycle. No sooner would he return to action and start showing what he could do, then his body would break down again and more and more questions would be asked about his professionalism. He clearly had the talent, but did he have the temperament?

The rumour mill went into overdrive. At one point, his agent, Moussa Sissoko, had to deny that his client had exacerbated one injury by sleeping on an airport bench in Bilbao as he waited for a flight to Senegal on a weekend off. Fans were also horrified by Junior Minguella's claim that Barca could have signed Kylian Mbappe from Monaco in 2017, but saw Dembele as a better fit.

All the while, Dembele's team-mates remained supportive, but Messi eventually admitted that there was only so much they could do.

"He is a phenomenon on the field but it depends on him how good he becomes," the Argentine told Marca. 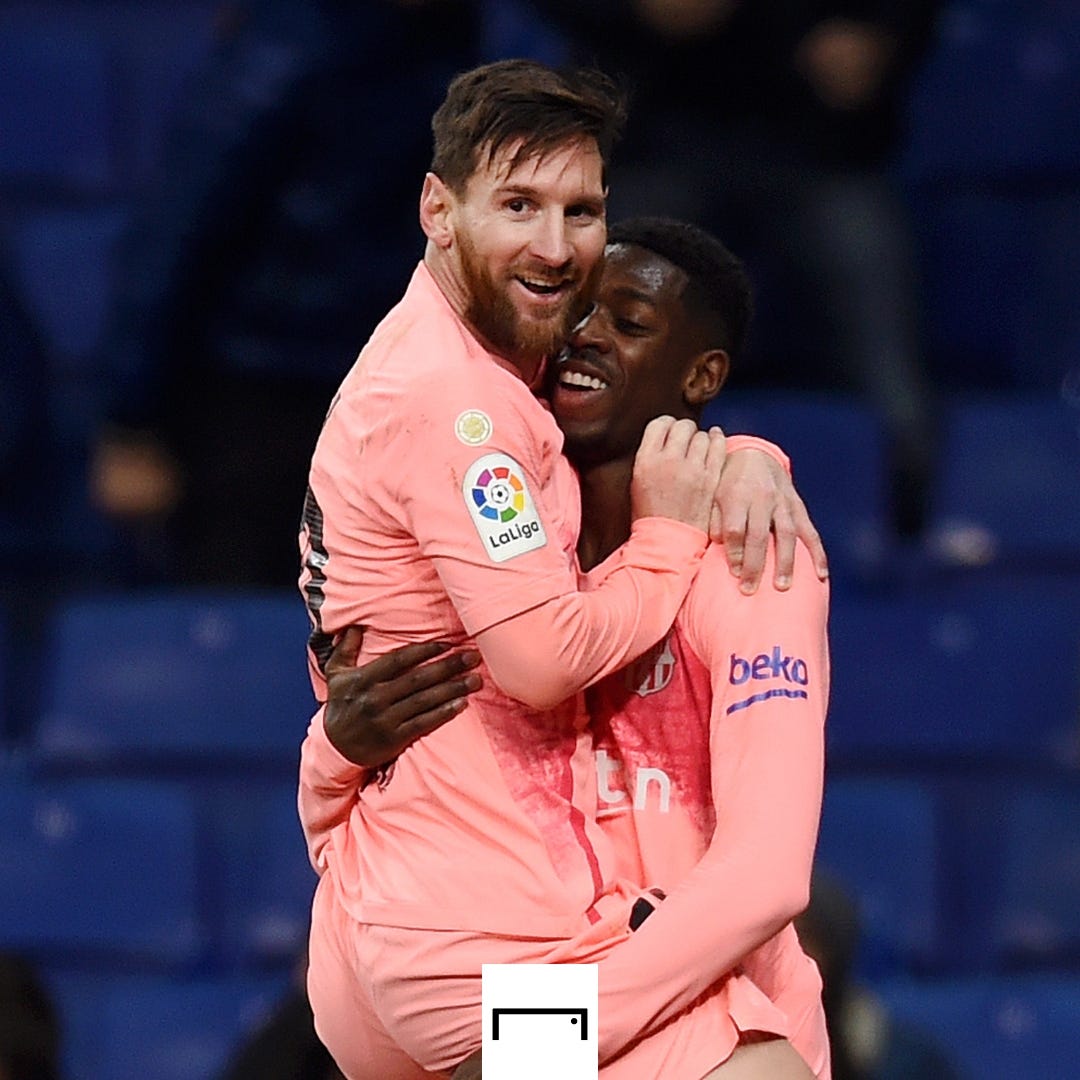 Dembele kept insisting he was listening to his colleagues. He continued to talk a good game whenever he mounted a comeback. But the injuries kept coming and his Camp Nou career looked destined to end with him being remembered as the biggest waste of money in Barca's history.

In that context, Joan Laporta's return as club president felt like a positive development for Dembele. He had always spoken glowingly of him: "I think Dembele deserves some special treatment because with these genius types of players, you have to look after them."

The problem was Dembele still wasn't properly looking after himself. Or making it clear that he really wanted to stay at the club. So, when talks of a contract extension stalled earlier this year, it appeared as if even Laporta had lost patience: "The whole Dembele thing is difficult to understand."

He wanted the player to either sign a new deal on reduced terms or go elsewhere to generate a fee for the cash-strapped Catalans. It was at this point, though, that Xavi went to work. As Dembele has admitted himself, the Barca boss is the main reason why he is still at the club.

As soon as Xavi replaced Ronald Koeman as coach last year, he told Dembele he was already a great player but that if wanted to become a star, he needed to completely change his mindset. 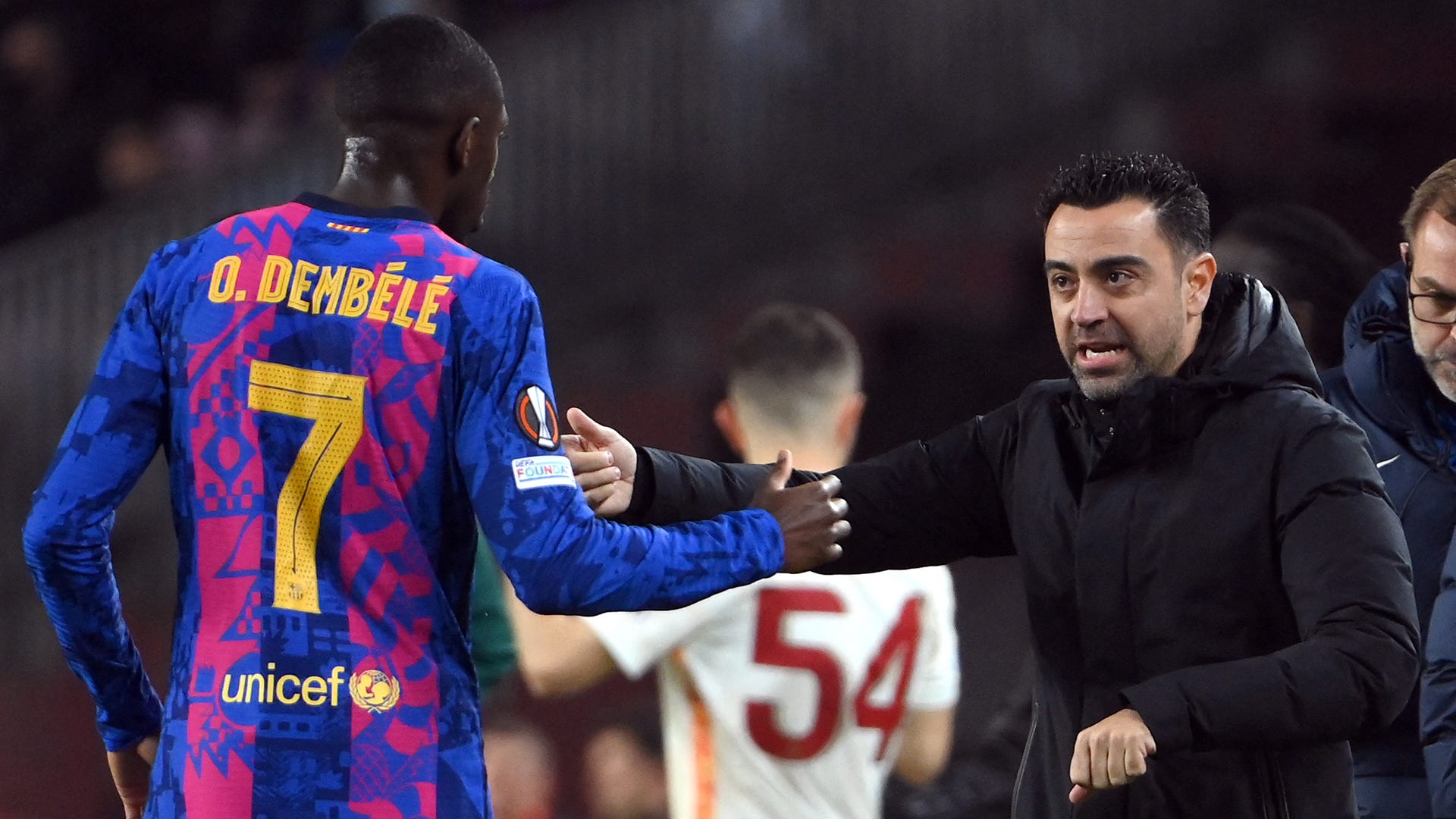 “Now I see that it's essential to work hard on and off the pitch,” he told Sport and Mundo Deportivo. "The injuries came because, when I was 20, I didn't work as hard as I do now.

"It's clear that if you don't work, you can't enjoy football, you're not going to play much and you're going to get injured. Now, I'm stronger."

There was certainly a noticeable improvement in Dembele's performances, fitness and attitude during the second half of last season, with the forward reaping the benefits of working far more closely with the club's physios and nutritionist.

However, he still looked set to leave Barca – and for nothing – during the summer.

Again, Xavi played a pivotal role. As revealed by GOAL, he pleaded with Barca to reach an agreement with Dembele's representative over a new deal before his contract expired at the end of June.

The deadline came and went, but, on July 14, Dembele finally put pen to paper on a new two-year deal.

Very specific clauses related to game time and performances have been included in the contract, and that’s hardly surprising. Barca have been burned before, after all. Dembele hasn’t just been drinking in the last-chance saloon for the past five years, he’s essentially been living there.

But the early signs are encouraging. Ahead of Tuesday's massive Champions League showdown with Inter, Dembele has scored two goals and created a further four in nine appearances so far this season. There is serious potential in his partnership with Robert Lewandowski. 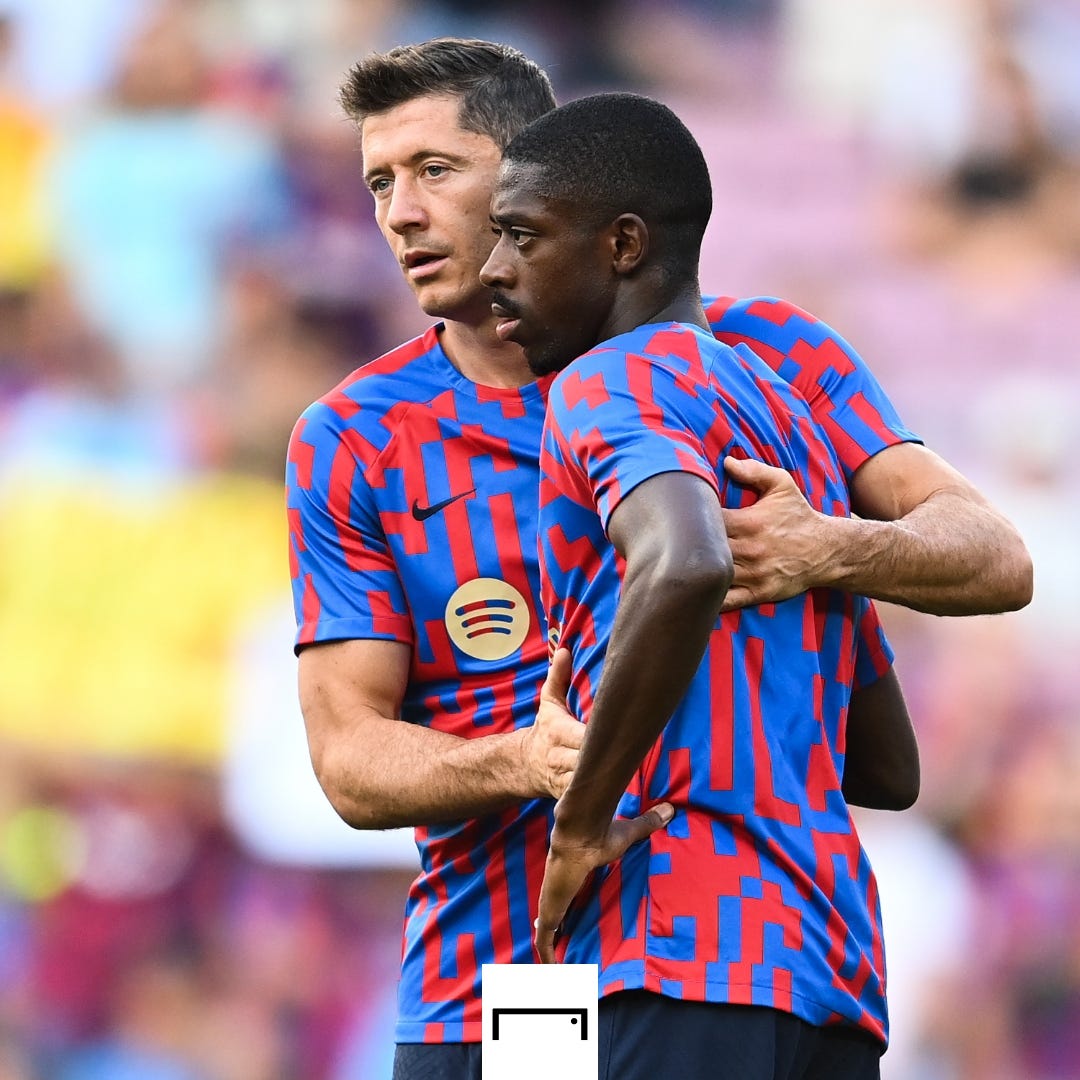 Indeed, if there was a moment that best summed up Dembele's renaissance, it arrived against Viktoria Plzen last month, when he left Lewandowski with a far-post tap-in after sprinting over to reclaim possession wide on the right wing with a determined and expertly-timed tackle.

"He [Dembele] has shown what he is capable of," Xavi enthused afterwards. "He is different, special. There are not many of this type of player."

That's undeniably true, but the challenge now is for Dembele to sustain this kind of form over not just one season, but several. This can't be yet another false dawn.

Xavi understandably insists he has no interest in dwelling on the past. As he has quite correctly pointed out, he never met the old Dembele.

"I don't know him," he said. "I am just very happy with this version."

At least he has learned something from them, though: “Talent is not enough.” Barca's enfant terrible appears to have finally grown up.

The good times are back at Barca 🥳

Can Dembele, Lewandowski & Co. win the Champions League this season?