Rich in history, Liverpool’s ground has been the home of some of football’s greatest players and managers, who have made the club the most decorated side in England.

Known worldwide for its brilliant and at times fierce atmosphere, Anfield is undoubtedly a bucket list stadium for fans all over the world, even if it is just to hear the lyrics of ‘You’ll Never Walk Alone’ being bellowed out by the Reds.

So if you are planning a visit, GOAL brings you everything you need to know.

Google maps: Further directions to the stadium can be found here

Anfield is two miles north of the Liverpool city centre, in the heart of the Anfield area. Goodison Park, the home of Liverpool rivals Everton, is only half a mile away, separated by Stanley Park.

If driving from the M57 north, follow the A580 towards the city for just under four miles, then turn left onto Queens Drive after passing Walton Hall Park on your right. After half a mile, at the traffic lights, turn right onto Utting Avenue and continue until you see the stadium on your right.

Alternatively, if you're arriving from the south or east, follow the M62 until you reach the A5058 Queens Drive. Stay on the A5058 for three miles before turning left onto Utting Avenue at the traffic lights, from there continue until you see the ground on your right.

If you're taking public transportation, take bus 17 from Queens Square bus station, which sits almost directly across the street from Liverpool Lime Street train station in the city centre. Alternatively, bus 26 or 27 from Paradise Street, or bus 917 from St John's Lane can be taken. All buses take you directly to the stadium.

Getting to Anfield by train is also an option; nearby stations include Sandhills, Bank Hill, and Kirkdale, though all three are about a half-hour walk away from Anfield.

When was Anfield built?

Anfield first opened in 1884, it was initially used by Everton until 1891, when a dispute over rent resulted in their relocation to Goodison Park. Newly-formed Liverpool then moved into Anfield in 1892.

Only three years later, several developments began at the stadium, which also included the construction of the famous Spion Kop, although that was built a decade later. Then in 1928, the Kop end was extended.

The old Main Stand was then removed and rebuilt with a new one as a part of several improvements made to the stadium between 1963 and 1973. Anfield was then transformed into a completely seated stadium in 1994.

Liverpool considered leaving Anfield for a larger, more modern stadium in the late 2000s, and even secured planning permission for a proposed 60,000-seater stadium at nearby Stanley Park. However, due to a lack of funding, the plans were postponed and eventually abandoned. Instead, the ownership opted to redevelop and expand Anfield

What is Anfield’s capacity?

Anfield’s current capacity is 54,074, making it the seventh largest stadium in England. Although a record attendance of 61,905 was set in 1958 when Liverpool played against Wolves.

However, in 1994, the capacity of the stadium was reduced when Anfield was converted into an all seater stadium, as a result of the unfortunate events of the Hillsborough stadium disaster.

But in January of 2015, the stadium saw an increase in capacity as reconstruction of the main stand added an additional 8,500 seats to Anfield, the development was completed in time for the 2016-17 season.

Which teams play at Anfield?

Liverpool are the sole tenants of Anfield and have been since 1892.

However, England have played a host of their international friendlies at Anfield, the most recent of which ended in a 2-1 victory for England over Uruguay in 2006.

Intriguingly, Liverpool's arch rivals, Man Utd, played their first home game of the 1971–72 season at Anfield after being barred from playing their first two home league games at Old Trafford due to a hooliganism incident. Man Utd defeated Arsenal 3–1.

The ground was also used to host three Euro 1996 games, including a quarter-final game between France and Netherlands, which saw the French prevail on penalties.

Anfield has hosted a number of music events including Liverpool’s European capital of culture celebrations, where 36,000 attended to watch a concert which featured the likes of The Zutons, Kaiser Chiefs, and Paul McCartney.

Live concerts returned to Anfield in the summer of 2019, with performances by Take That, Bon Jovi, and Pink. Take That lead singer Gary Barlow, a Liverpool supporter, sought the help of guest vocalist Gerry Marsden to perform the club's anthem ‘You'll Never Walk Alone’.

Throughout the inter-war years, Liverpool’s ground was used to host a number of boxing matches, including a featherweight bout for the world title, where Liverpudlian Nel Tarleton beat American Freddie Miller to win the title.

Anfield has also been the venue of a number of rugby matches, including the 2016 Rugby League Four Nations Final, where 40,042 spectators watched Australia come out victorious over New Zealand.

Can you book an Anfield tour?

Liverpool provides guided stadium tours which includes admission to the club's museum as well as the stadium's ‘Boom Room’ exhibition, which tells the story of Liverpool’s first league title win under Jurgen Klopp, 30 years on from their last.

Tours run everyday of the week from 10am to 3pm, although schedules may vary on match days.

Reservations can be made online. Walk-ups are permitted, however they are subject to availability, thus it is recommended that you book the tour in advance.

What is the Anfield seating plan? 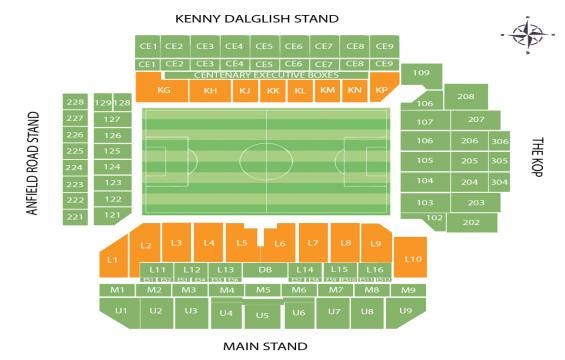