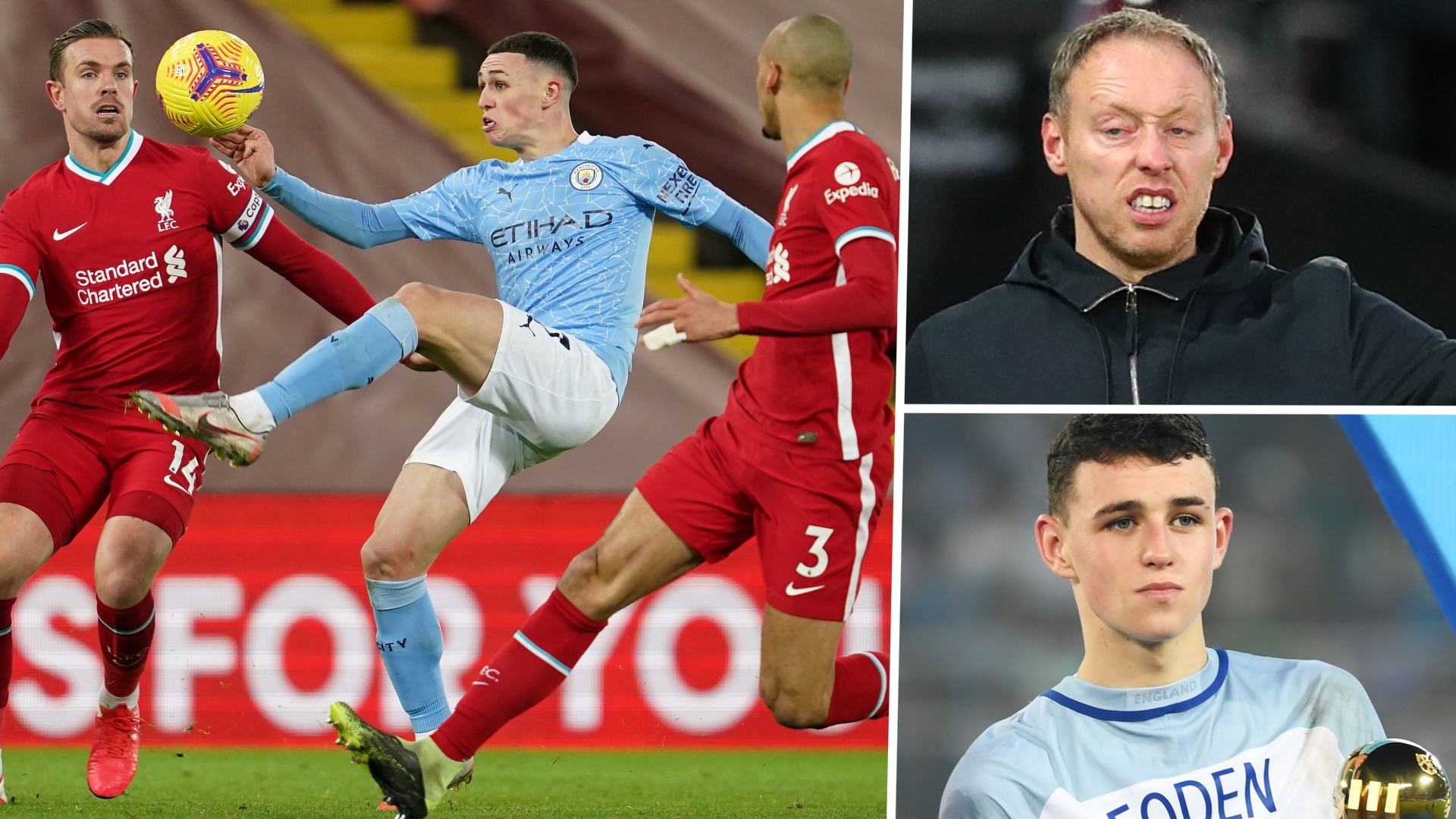 An FA Cup clash with Swansea sees the Man City prodigy go up against Steve Cooper, the manager who helped launch him onto the global stage

If Phil Foden's performance against Liverpool at Anfield on Sunday was the moment he came of age, it was in India four years ago that he first announced himself as a player of enormous potential.

The Manchester City midfielder was the standout talent within a supremely talented England squad that triumphed at the 2017 Under-17 World Cup.

Callum Hudson-Odoi, Emile Smith Rowe, Jadon Sancho and Rhian Brewster all impressed in India but it was Foden who was named the player of the tournament.

England's coaches were confident even back then that World Cup glory at under-age level was just the beginning for such an exciting young bunch, believing that several members of Steve Cooper's squad were destined to star for the senior team further down the line.

And they were right too. Foden, Hudson-Odoi and Sancho have all since been handed their international debuts by Gareth Southgate's England, as excitement builds about the possibility of what they can achieve together in the coming years.

Southgate has worked closely with England's youth coaches to get all of their sides playing a possession-orientated style that encourages individual flair.

Cooper is now in charge of Swansea, meaning he will be reunited with Foden when City travel to Wales for their FA Cup fifth-round meeting with the Championship outfit.

He always had high hopes for Foden and is, thus, delighted to see the 20-year-old now starting to fulfil his obvious potential.

"It's always a good thing having ability and potential, but it's another thing turning it into action, and he's doing that at the moment," Cooper said.

"When you see talents like this at a young age, you work with them, and you hope that they can progress and get opportunities, and then take those opportunities and flourish.

"It seems to me that from the outset, he's been doing that. He's obviously played in big games and that's amazing to see.

"He's under brilliant stewardship with Pep [Guardiola]. He will be getting the best guidance possible."

It was the final in Kolkata where Foden really launched himself on the path to superstardom with a wonderfully audacious display, with the then-17-year-old scoring twice in a 5-2 victory over Spain.

At the same time, just over 5,000 miles away, City had beaten West Bromwich Albion 3-2 to register their eighth successive Premier League victory within an 18-game winning streak that would propel them to a record 100 points, and a first title under Guardiola.

As the media waited for the City boss to attend his post-match news conference, some Midlands-based journalists were transfixed by a television in the press room showing England's game against Spain. It was their first sight of Foden in action.

Informed of the No.7's two goals, Guardiola joked that Foden would play in the same position when he returned to Manchester but, in truth, he wasn't the least bit surprised by Foden's impact.

He knew all about his potential from the first time he saw him playing for the Academy and would have already handed him his first-team debut had he not been away at the World Cup.

But Guardiola, who is an advocate of bringing 'B' teams to lower leagues in England to help young players develop, thought he would gain more from playing in the tournament.

"I complain sometimes about the second team playing in an insignificant league and that they cannot develop," he said ahead of the trip to Swansea. "When these guys play in World Cups and European Cups, the improvement is massive.

"Players improve playing football, not with this manager or that club or those team-mates. They improve when they can play day-by-day in tough games against people older or better than them.

"Phil at 17, Brewster or Sancho or others at that World Cup... They improved incredibly and will be better players in the future for it."

As it was, Foden only had to wait another three weeks before making his City debut in the Champions League victory over Feyenoord.

He has since made a further 101 appearances for his club, as well as winning two caps for England, after being carefully nurtured by Guardiola.

The Catalan knows all about developing superstars, having helped players such as Lionel Messi, Gerard Pique and Sergio Busquets go on to achieve great things in the game.

And he has warned his latest protege not to get too excited about the hype generated by his recent brilliant form.

"He has to be calm and understand that the tough periods are going to come," he added. "It depends if he’s humble with this and keeps his love for the game. The expectations at that age can be too much. We’ll see if he can handle it.

"Now, people will expect him to do exceptional things every game; this is the most difficult thing.

"Reaching 100 games is difficult, but what is important now is to do 100 more and 100 more at this level, playing every day and winning every day. This is the toughest thing.

"That is why the greatest players don’t play one great match in Anfield or play good games; they stay five years in a row being consistent and not being injured and playing, playing, playing.

"This is the next target for Phil."