At Euro 2012, the finest footballing double-act of the tournament could be found marauding down Portugal's left flank.

By that time, of course, Cristiano Ronaldo had established himself as the superstar we know today, but backing him up was his club-mate and good friend Fabio Coentrao.

Ronaldo may have played every minute of the Seleccao's run to the semi-finals and was named in the team of the tournament but Euro 2012 will hardly go down in history as one of his very best campaigns.

For Coentrao, though, it was the high point of his career.

An attack-minded left-back who could also play further forward, Coentrao took his first steps in the professional game at his local side Rio Ave, where he broke into the team as a teenager and was tipped as a star of the future.

Coentrao had a huge emotional connection with Rio Ave, beyond that of most youth players and their clubs. He said in a 2020 interview with O Jogo that his parents had to emigrate from Portugal when he was 13, leaving him alone to pursue his football career, and the club were always there to support him.

Bright lights and big clubs beckoned, however, and he moved to Benfica, where, after a series of loans he became a star of the first team, earning himself a €30 million (£26m/$36m) move to Real Madrid in 2011 on a six-year contract.

It made him the third most expensive defender in history and Ronaldo was delighted to have Coentrao on board, having talked up his compatriot's quality before his arrival at the Santiago Bernabeu. 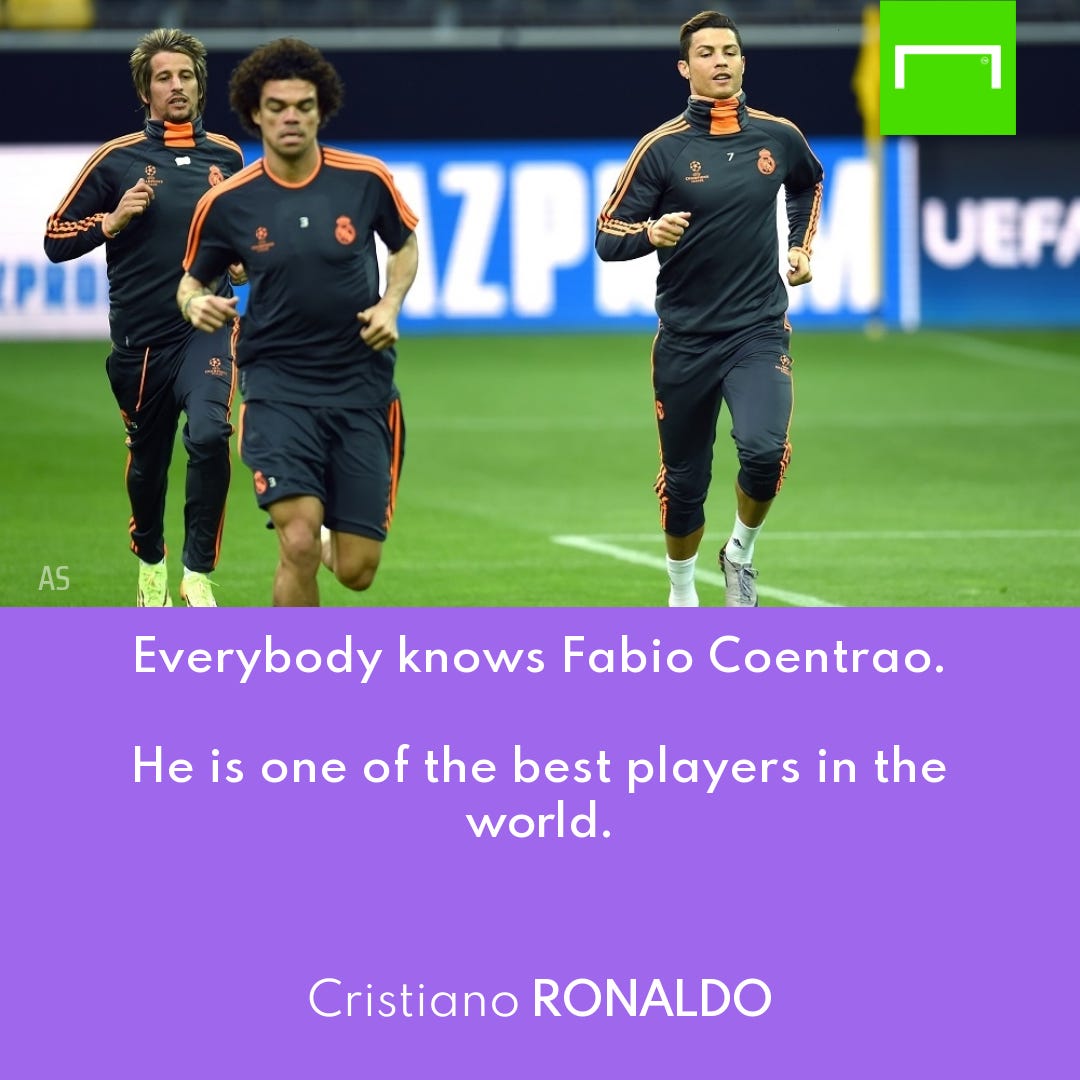 "Everybody knows Fabio Coentrao,” the Portugal international told AS. “Therefore, it is not really necessary to talk about his qualities. He is a very strong player and can play in several positions. He is one of the best players in the world.”

However, Madrid's coach at the time, Jose Mourinho, did not hold his fellow Portuguese in quite such high esteem. Coentrao became a utility man, who would play on the left but also in central midfield and occasionally at right-back.

Having to compete with Marcelo for a starting spot in his preferred position didn't help either, obviously, and Coentrao was always in and out of the starting XI, unable to nail down any permanent place.

A loan to Manchester United for the 2013-14 season fell through, and he subsequently played a supporting role in the Decima-winning season, starting the final six knockout matches of their Champions League triumph.

In 2014-15, he played only nine games, with new boss Zinedine Zidane making it abundantly clear that Marcelo was his main man at left-back and that Coentrao was dispensable.

After loan spells at Monaco and Sporting CP, he finally left the Spanish capital for good.

Ronaldo continued to talk Coentrao up, posting a picture of them battling in training together to Instagram in 2017 with the accompanying caption: "One-on-one in training. Happy to play against one of the world's toughest defenders. My brother Coentrao."

However, those close ties with Ronaldo also hurt Coentrao, with some suggesting the fact that they shared the same agent, Jorge Mendes, meant he received preferential treatment.

Coentrao's face never really fit amid the galacticos of Madrid, a talented everyman amid footballing royalty. This made him a frequent target for the press. Indeed, during his first season he was criticised when photos appeared of him smoking.

However, Coentrao felt he was unfairly targeted, telling Marca in 2015: "If I had a bad game, they attacked me immediately. If I played well, they gave it very little recognition. Even today, I still ask myself why I was the media's ugly duckling?" 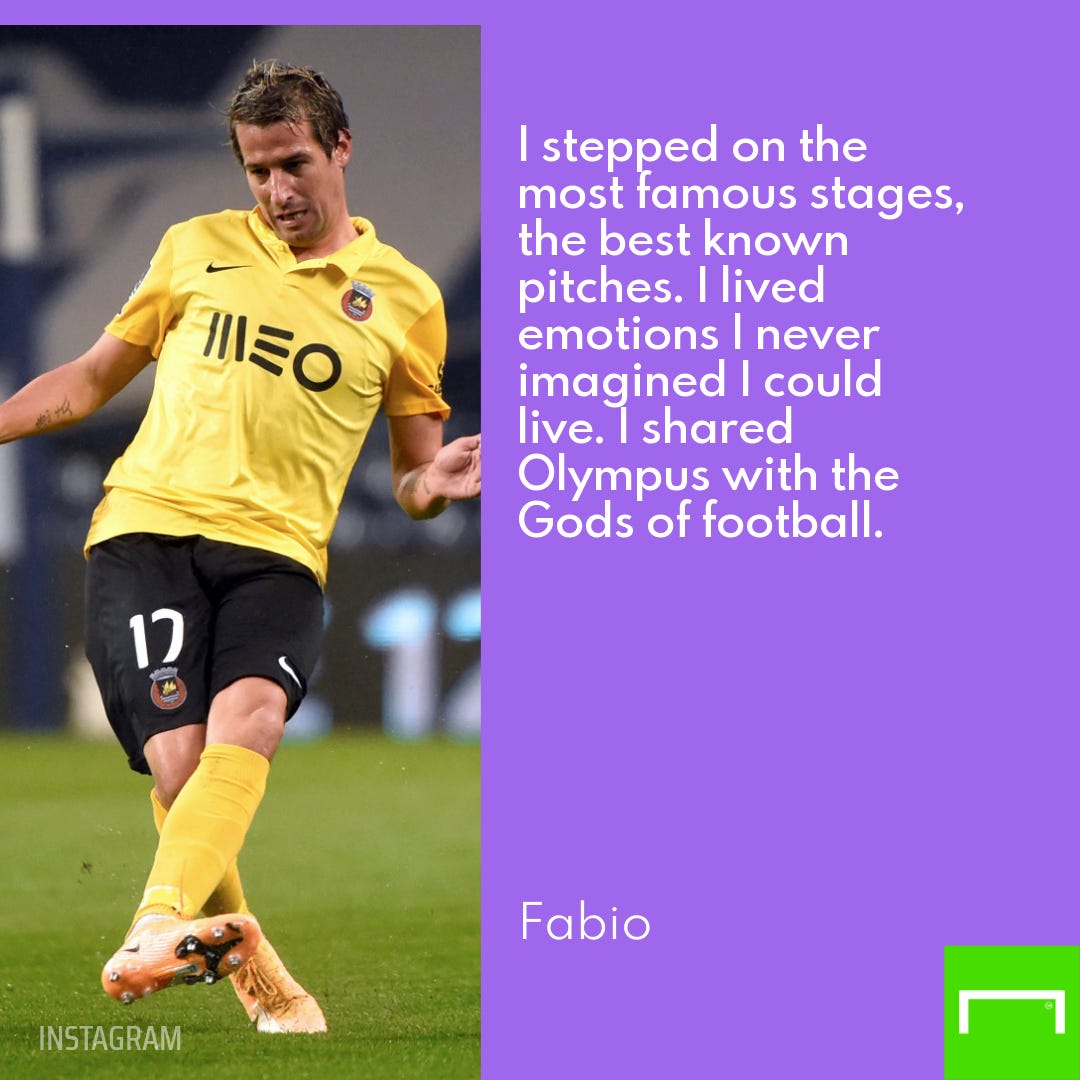 In total, he spent seven years on Madrid's books before returning to Rio Ave. It represented a huge step down in terms of prestige, but for Coentrao there were far more important things at stake.

He told Record: "I thought I needed to be happy and I lost a lot of money to get that happiness at Rio Ave, a club that has always acted well and faithful to me. There is no money that can pay for happiness. I was born poor. I don't mind dying poor.”

Aged 33, Coentrao can still be found patrolling the left wing for Rio Ave. He briefly retired from football in January 2020, but returned for yet another stint with his boyhood club in October last year, marking it with an emotional post on Instagram.

Coentrao wrote: "This was my starting point for the football world. Here was the beginning of a path that led me to live an adventure that I'm proud of. I stepped on the most famous stages, the best known pitches. I lived emotions that I never imagined I could live. I shared Olympus with the Gods of football.

"I conquered and helped to conquer what was unthinkable for a boy who one day left this city and this club. I come back with the same passion that made me come back two years ago. Because this fire burns unceasingly, because I know I still have so much to give. Because here among us lives the same desire to win and to fight as Fabio who left here one day. It's good to be home."

He was, however, unable to prevent their relegation from Primeira Liga, losing 5-0 in a play-off against Arouca.

For Coentrao, the question remains as to whether he was ever a serious talent, or just had some seriously talented friends.