From struggling in the 2nd division with HAL to winning I-League with Aizawl - How Eze Kingsley turned his fortunes! 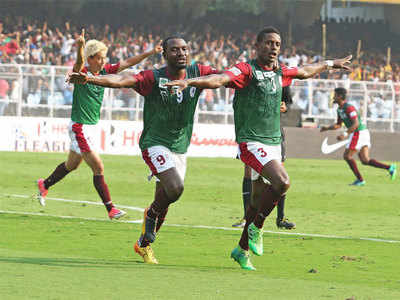 Eze Kingsley was never supposed to come to India. It was only after a failed move to Belgium, he decided to try his luck in India.

When he came to Bengaluru and joined Hindustan Aeronautics Limited (HAL), a team that plied their trade in the I-League 2nd Division back in those days, he was just another face in the crowd of Africans who come to India every year in the hunt of better prospects. While most end up leaving after failing to find a break through, a few make India their home. Kingsey belongs to the latter faction.

"In August 2012, I came to India. I was told to play for a year in India and in the next season, I will go to Belgium as promised. The promise of Belgium helped me to keep going. But the move never happened. One guy went back home (Nigeria). I could not do that. I had to fight and establish myself here. I did not allow the situation to pull me down. It took some time but it is fine," reminisced Kingsley to Goal.

He did take some time to settle down, at least a few years. He understood that staying in Bengaluru was not helping his cause and he shifted base to Kolkata, in search of more opportunities.

After reaching his new city, he joined Kalighat Milan Sangha which also played in the 2nd Division. But the team also plied their trade in the Calcutta Football League (CFL) which is closely followed by scouts and coaches of various clubs not only from West Bengal but across the country. This provided him the platform to showcase his talent. While playing for Kalighat, he was spotted by Aizawl but the transfer could not materialise in that season.

Hence in 2015, he signed for United SC and continued to play in 2nd Division and the CFL. Co-incidentally in 2016, Aizawl was given a lifeline by the All India Football Federation (AIFF) which prevented them from getting relegated. The North-Eastern outfit roped in Khalid Jamil for the next I-League season and once again offered Kingsley. He did not think twice and after toiling in the 2nd Division for a couple of years, the Nigerian grabbed the opportunity with both hands to play in the then top tier of India.

"Aizawl were put back in the I-league and we did not expect anything. We just tried to finish in a better position. The aim was for the fifth spot to be precise. But after the first match, everything changed. Against East Bengal, we won at Barasat. That was the turning point. Yet we did not think about the championship. Our target was to finish on a good note."

Along with Kamo Bayi, Mahmoud Al-Amna, and Kingsley himself, most of the players of that team were debutantes in I-League. He believes that the lack of pressure helped their cause.

Moreover, in the absence of any marquee player, the players were keeping each others' back, instead of relying on any particular individual. The 'team' stepped forward in the important matches and made the Rajiv Gandhi Stadium in Aizawl their fortress which could not be breached by any other outfit in that season.

"We won every match at home barring the one against Bengaluru FC. But if I have to speak of one match it would be the one against Mohun Bagan. They just needed a point to virtually seal the championship and we had to get those three points. It was a 2 o'clock kick-off but there was so much fog, the visibility in the ground reduced drastically. I could not even see the forwards. We kept hanging there. They missed one or two golden opportunities and after the 80th minute, we scored from a corner. It was surreal to win against them."

But in the next match against Shillong Lajong, they would be missing two of their key players in Alfred Jaryan and Ashutosh Mehta due to suspension. To further complicate matters, Kingsley himself was a doubt after he suffered a sprain in the knee in the final practice session before leaving for Shillong.

"The night before the match (against Shillong) I could not sleep. I went to four different hospitals to get it treated and so that I could play. It was swelling and nothing was working. The coach could not sleep and personally I also felt very restless. Throughout the night, I tried to do so many things with my knee and around four and I started jogging outside the hotel. On the matchday morning, I felt a little less pain but the niggle was still there. Nevertheless, I played the whole match."

Aizawl ended up winning 2-1, and bagged the title.

That title-winning campaign not only earned Aizawl a place in the record books but also made Kingsley a sought after name in the transfer market. In the next season, he joined Kolkata giants Mohun Bagan with a fat pay cheque.

He arrived reluctantly in this country, looking for a better life. He has achieved much more than that, more importantly, he found a 'second home' i.e. Kolkata.