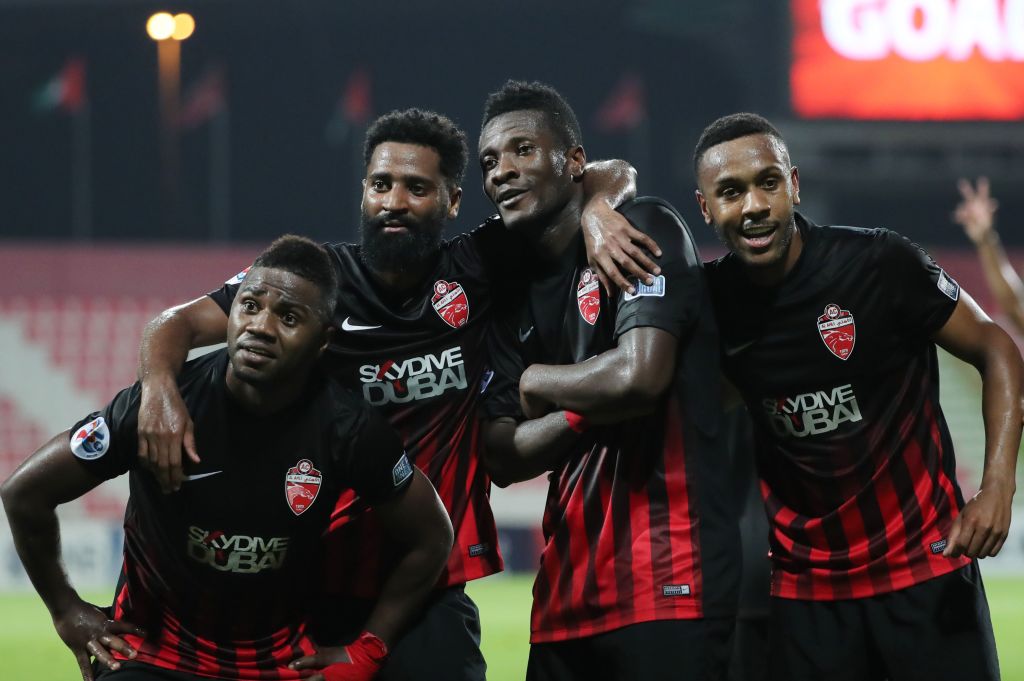 All four groups in the West Zone have come to an end in Asia's primary continental competition while two East Zone groups have also been decided...

Group stages of the AFC Champions League 2017 came to an end in Groups A, B, F & G on Monday. Let's take a look at what transpired on the continent in the eight games that took place on the day:

Al Ahli of UAE secured a spot in the knockout stages of the AFC Champions League by winning Group A after a 4-0 hammering of Uzbekistan's Lokomotiv Tashkent.

Al Ahli, who needed a win to make sure of the top spot, took the lead in the 27th minute when centre-back Salmin Khamis headed home Everton Ribeiro's cross. Al Ahli had to wait till the 58th minute to extend their lead as Ismail Al Hammadi's shot hit the post and ricocheted off goalkeeper Akram Ikramov into the goal. Former Sunderland striker Asamoah Gyan made it 3-0 in the 72nd minute with a clever finish before Everton Ribeiro rounded off the scoreline five minutes later.

Though Al Ahli were tied with Esteghlal atop the group with eleven points each, the UAE side won the group thanks to a better head-to-head record.

Iran's Esteghlal progressed to the AFC Champions League knockout stages as Group A runners-up after defeating Al Taawoun 2-1 away.

They only needed to avoid defeat on the day to confirm their progression and looked well on their way when Jaber Ansari was found by Kaveh Rezaei's cross inside the area. Ansari proceeded to control the ball and smash a finish home. Al Taawoun, though, did not let their fans down and fought back with an equaliser in the 36th minute. Al Taawoun were awarded an indirect freekick inside the Esteghlal box and Mohammed Al Saiari smashed a lay-off into the far corner.

It seemed as if the game would finish in a draw but Rezaei had other ideas. He broke forward on a counter and placed a finish past the 'keeper from outside the area to win his side all three points and a spot in the knockout stages where they will take on UAE's Al Ain.

Iranian outfit Esteghlal Khouzestan have advanced to the knockout stages from Group B as the second-placed team after a 1-1 draw at home to Al Jazira on Tuesday.

Esteghlal Khouzestan needed just a point from this game if Lekhwiya were beaten by Al Fateh in the other Group B game, but ultimately it was not required though they got their point. But there was a slight scare when Al Jazira took the lead in the 43rd minute when Humaid Ahmed found the bottom corner with a splendid strike from outside the area.

However, with time running out, Esteghlal Khouzestan mounted a late assault on the UAE side and managed to find an equaliser four minutes from time. Substitute Mehdi Zobeidi rose highest to head home Hassan Beit Saeid’s cross from the right.

Qatar's Lekhwiya SC confirmed themselves as the Group B winners by demolishing Al Fateh 4-1 in a brutal first-half performance that produced four goals.

Lekhwiya were all over the Saudi Arabian side in the opening half and took the lead as early as in the ninth minute when the Al Fateh custodian spilt a speculative cross and Mohammed Musa pounced on it. Yousef Msakni then doubled the advantage in the 20th minute when he ran onto a splendid through-ball from Nam Tae-hee and placed a finish past the 'keeper. It became 3-0 seven minutes later as Ali Hassan Afif found the top corner with a sweeping left-footed effort from outside the area. There was further misery for Al Fateh as former Swansea City defender Chico Flores received a pass inside the area and saw a low effort find the back of the net.

Though Chico Flores had the misfortune of scoring a late own goal, it did not affect the result of the match one bit. Lekhwiya will now take on Iran's Persepolis FC in the knockout stage.

Kawasaki Frontale have progressed to the knockout stages of the AFC Champions League with a commanding 4-0 win over Eastern SC that also won them Group G.

Kawasaki Frontale, who are yet to lose in the tournament, surged into the lead in the 28th minute Brazilian Rhayner nodded in Shintaro Kurumaya’s dinked cross from the left. Right on the stroke of half-time, Shogo Taniguchi rose highest to nod in Kengo Nakamura’s corner from the right as the scoreline read 2-0 at the break. It became 3-0 just four minutes into the second-half when substitute Tatsuya Hasegawa turned in Rhayner's cross.

Another four minutes later, the rout was complete as Tatsuki Nara headed in another corner from Nakamura. The win saw Kawasaki Frontale finish with ten points, same as that of Guangzhou Evergrande but a better head-to-head record meant Kawasaki won the group.

The Chinese outfit only needed a draw to progress but were given a shock at the start when Suwon drew first blood in the ninth minute. Kwak Kwang-Seon sent a low cross in from the right which was side-footed home by Yeom Ki-Hun, much to the displeasure of coach Luiz Felipe Scolari. However, Ricardo Goulart equalised for Guangzhou in the 17th minute with a low strike from the edge of the area which crept into the bottom corner.

The game became cagey as the match progressed and Goulart gave Guangzhou the lead in the 68th minute when he headed home Gao Lin's cross into the box from the left wing. But the game was back on level peggings once Kim Jong-woo scored with a scorching left-footer from outside the area which went in off the post. But Guangzhou survived a nervous few moments to book their spot in the next round.

South Korean outfit Jeju United advanced to the knockout stages of the AFC Champions League for the first time ever after a 2-0 win over Gamba Osaka on Tuesday and secured the runners-up spot in Group H.

Jeju United had known before the game that all they required to progress was a win and they started well, surging into the lead in the 29th minute. Chung Woon beat the offside trap to meet a brilliant ball from Marcelo Toscano before lashing a finish home. In the 66th minute, Hwang Il-su made the result safe with a curling effort from outside the area that found the bottom right corner.

The group had already been won by Jiangsu FC but Jeju United finished with ten points to secure second spot while Gamba Osaka finished bottom with four points.

Jiangsu Suning FC ensured the elimination of A-League outfit Adelaide United with a 1-0 win away on Tuesday and finished their group stage campaign with five wins from six games.

It was Adelaide United who dominated the first half of this game, knowing that they needed to win to stand any chance of advancing. However, they failed to force the Jiangsu goalkeeper to make many meaningful saves. Their profligacy would continue to plague them in the second-half as well and Jiangsu made them pay the ultimate price nine minutes from time. Ji Xiang’s fine strike from outside the area proved too much for Adelaide goalkeeper Eugene Galekovic and the Chinese side saw the game out.

The result also meant no Australian sides would progress to the knockout stages of the tournament this time around.