The son of a Premier League cult hero, the 17-year-old striker has impressed Pep Guardiola with his physicality and goalscoring ability

After he became the breakout star of the 2019-20 season, every team is now on the look out for their very own Erling Haaland.

The Borussia Dortmund forward's journey from unknown teenager to becoming one of Europe's most feared strikers proved to be one of the storylines of the last campaign, and fans around the world are hopeful that their own club has a potential superstar on their books who is about to emerge from their academy ranks.

At Manchester City, there is a belief that could well be the case, with their own 'new Haaland' sharing a number of characteristics with the Norwegian goal machine.

Like Haaland, Liam Delap is the son of a former Premier League footballer.

His father, Rory Delap, made 359 appearances in the English top-flight for Derby County, Southampton, Stoke City and Sunderland, becoming something of a cult hero during his time at Stoke after routinely striking fear into opposition defences with his outrageous long throws under Tony Pulis.

Delap Jr. has, of course, already been asked whether his father's ability with his arms has been passed on. It has not; the 17-year-old is very much his own man.

That said, he does share some of the same skills that have helped Haaland adapt so quickly to the highest level of the senior game.

Standing at just over six feet tall, Delap has been singled out for his strength and power at youth level, with it regularly allowing him to bully opposition defenders.

He also possesses an eye-catching turn of speed as well as being a fantastic finisher when he gets a sight of goal, with Pep Guardiola just the latest to become a fan of the teenager.

Delap began training with City's first-team squad midway through the summer to help fill out the numbers, but he has already been fast-tracked into Guardiola's planning for the new campaign after impressing the Catalan and his staff.

With Sergio Aguero out and set to miss at least the opening two months of the season through injury, Delap was named as the only out-and-out striker among the substitutes for City's Premier League opener against Wolves.

Though he did not make it onto the pitch at Molineux, he is set to make his first-team debut against Bournemouth on Thursday, with Guardiola having admitted he will be forced to blood youngsters in the early rounds of the Carabao Cup so as to avoid a worrying injury situation becoming any worse.

CHAMPIONS 🔥 what a team #mancity #daretocreate

Given his family connections most of the attention will likely be on Delap at the Etihad Stadium, but if his short career thus far is anything to go by, he will take it all in his stride.

Delap only joined City in the summer of 2019 having been part of Derby County's academy since the age of seven.

His father worked at the Rams as a youth coach, and as such leaving the club proved to be a difficult decision for Delap, though it has been vindicated by his performances in a City shirt so far.

“Liam has improved a lot since I started working with him – he’s improved no end,” City's former Under-18s coach, Gareth Taylor, said in March.

“There were some really good raw ingredients, but he has worked hard and he made the difference when it mattered.”

Delap was the attacking focal point of a City team that won the Premier League's U18s Northern Group in 2019-20, scoring seven goals and laying on six assists in 11 appearances before Covid-19 brought a premature end to the youth football season.

He also helped his new club reach the semi-finals of the FA Youth Cup while winning his first two caps for England U17s having previously finished as top scorer at the 2019 Mercedes-Benz Aegean Tournament for U16 international sides in Turkey.

Perhaps the biggest moment of his career thus far, though, came in the rather low-key surroundings of Field Mill: the home of League Two outfit Mansfield Town.

Playing for City's U21s against the Mansfield first team in the EFL Trophy, Delap scored two goals and laid on an assist in a 3-0 win for the youngsters over far more senior opponents.

Two goals & an assist against senior opposition for Liam Delap (No.48) last night.

Seventeen-year-old Delap - the son of long-throw expert, Rory - is a regular for England U17s & is causing plenty of excitement around the CFA.#NxGn https://t.co/cKRK1whovE

“Some of their lads were six or seven years older than us but I think we showed them that we can compete,” Delap said post-match.

“I was excited to play against them. It was a taste of men’s football and that’s where I want to be so to get that opportunity and do well is only going to be good for me.”

Playing against more experienced players may also help Delap deal with what is his biggest weakness: his very short fuse.

Four days following his heroics against Mansfield, he was named in City's U23s side to take on his former Derby team-mates in their opening Premier League 2 fixture. 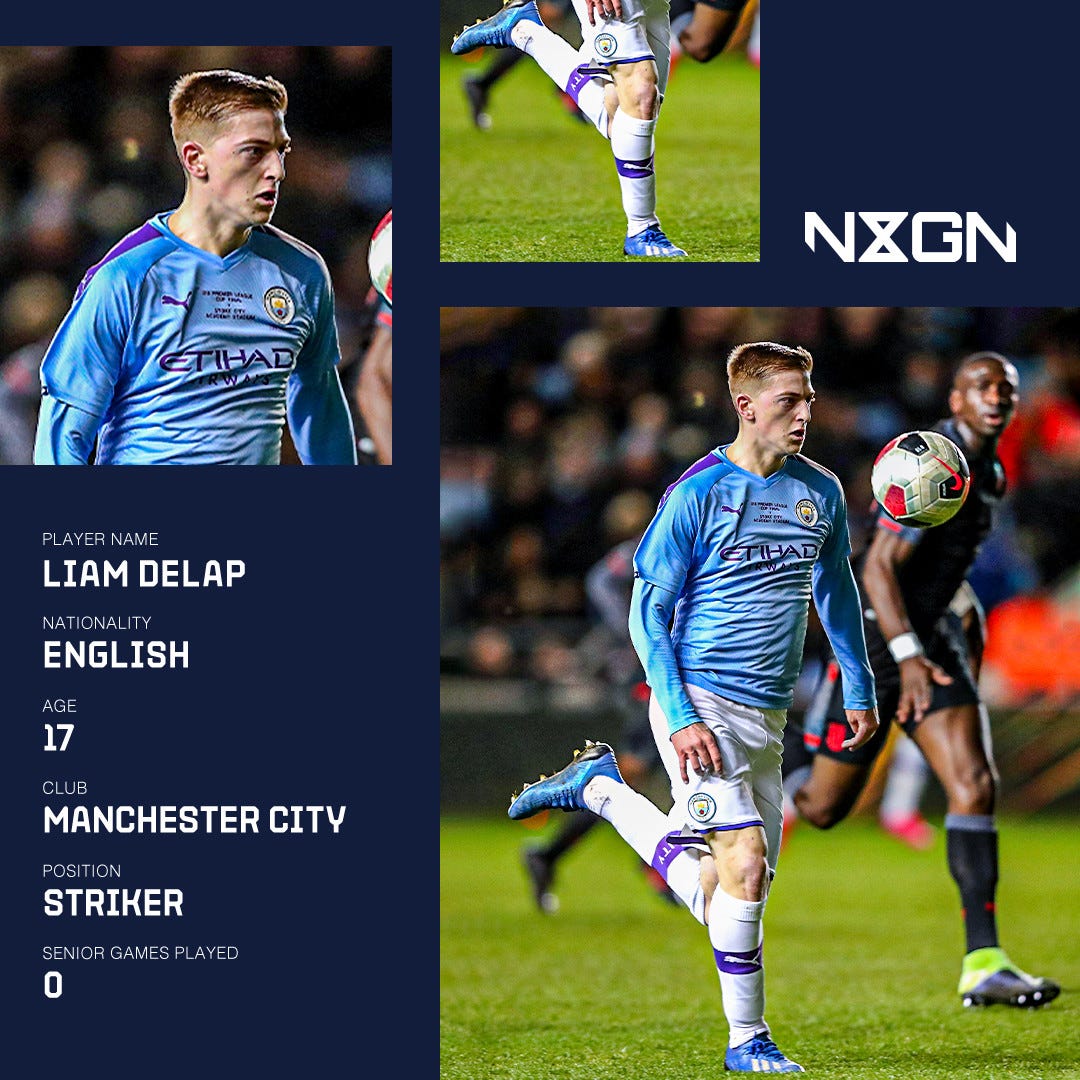 Delap scored a superb individual goal to put City 2-0 up shortly before half-time, only to then pick up two yellow cards after the break that saw him receive his marching orders. His dismissal helped allow Derby to fight back and earn a 3-3 draw.

Having picked up six yellow cards in 11 U18s games last season, close observers of the City youth team have suggested to Goal that, while Delap's enthusiasm is critical to his style of game, it can too often boil over and could cost him first-team opportunities unless he learns to control it.

Still, that determination has helped Delap force his way into the thoughts of Guardiola and his coaches.

With a shortened season and hectic schedule to come, his breakthrough could arrive much sooner than expected.