By Miles Chambers
The Catalunya club's attacker has hit back at claims from the Brazilian side's president that he had no knowledge the player could speak to other clubs
Neymar has released a document claiming to prove that Santos gave him permission to talk to Barcelona or any other club about a transfer.

The 21-year-old's move from Brazil to Europe last summer has gone under intense scrutiny in recent weeks, with a Spanish high court investigation into the transfer triggering the resignation of Sandro Rosell as Camp Nou president.

Barca attempted to mend the situation by publishing the exact details of the deal they made to bring Neymar to the club, with the total amount paid pre-wages for the player amounting to €86.2 million.

But the saga has continued to rumble on, with Neymar's father confirming on Tuesday that he was paid €10 million in 2011 to ensure the Selecao star did not leave Brazil for any other team.

Santos president Luis Alvaro de Oliveira Ribeiro claimed on Tuesday that he had no knowledge of any pre-transfer agreement, but Neymar released what the player claims is document proving the Peixe gave him the green light to leave. 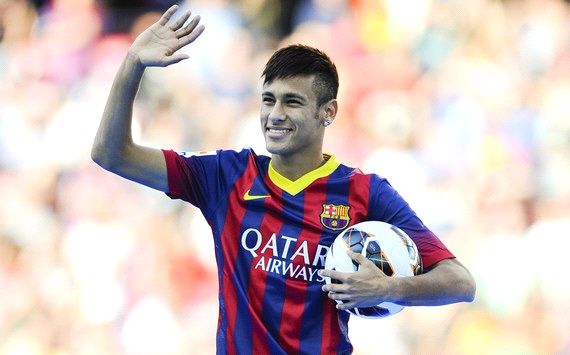 €86.2 million man | The forward waves to Barca fans not long after signing a bumper deal at Camp Nou
The statement, released on the Barca forward's Twitter and official website, read: "[Santos] expressly agree that we inform and empower the player Neymar to start straight away any dealings with any entities in sport - national or international - to finalise a possible transfer, provided that this only occurs before 2014."

Dated November 8 2011, the document is signed by Ribeiro, suggesting that the Brazilian club fully recognised Neymar's opportunity to speak with other potential suitors.

It is also stamped by both Santos and Barcelona, and was signed the day before Neymar penned a new contract at the club which would have run until after the World Cup in Brazil.

While Neymar did not wait until 2014 to move away as the contract states, the player's father claimed on Tuesday that Santos agreed it was in the best interest of the club and the player to move in 2013 instead of in a World Cup year.

Neymar Sr - whose company, run by himself and Neymar's mother, made €40m from his son's transfer - also suggested he could have made €120m had Neymar waited until 2014 to quit his boyhood club.
Close