"He and Holger Badstuber will soon play together in the national team," Bayern Munich assistant coach and former amateur trainer Hermann Gerland once said of Mats Hummels. At the time, the young defender was playing for the Bavarians' reserves. But Gerland was later proven right: both Hummels and Badstuber have since matured into regular call-ups in Joachim Low's Germany squad.

Even at 17 years of age, Gerland knew Hummels was destined to be a star. The player's father and future agent, Hermann, was junior co-ordinator for the club, and young Mats had worn the Bayern shirt since the age of six.

At Gerland's advisory, senior coach Felix Magath promoted Hummels to the first team in 2007, and the Bergisch Gladbach native signed his first professional contract. Magath was sacked soon thereafter, and his successor Ottmar Hitzfeld sent Hummels back to the reserves. In the spring of 2008, the defender was shipped off to Dortmund on loan. 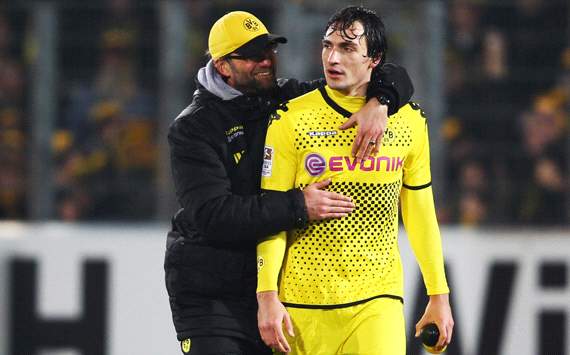 Mats my man | Klopp has been instrumental in Hummels rise

Six months later, BVB hired Jurgen Klopp, and thus began a prosperous relationship. The new coach put his faith in the then-19-year-old Hummels, and was so impressed with the rising talent that he convinced the Dortmund board to offer €4.2 million to sign him on a full transfer. Jurgen Klinsmann, who had succeeded Hitzfeld at the Allianz Arena the previous summer, was uninterested in the player, and allowed him to leave. It was a decision Bayern would later regret.


Gerland was unimpressed: "We never should have let him go," he later said. And he was not alone in his opinion. Only after the youngster left did Bayern truly realise the gem they had produced.

Last spring, Uli Hoeness & Co. tried to lure the prodigal son back to Munich. Hummels had a buy-out clause in the region of €8m, and BVB would have been powerless to block a move. But the player himself declined, and instead penned a new deal with Dortmund - this time with no exit clause - until 2014.

Hummels appreciates the trust Klopp has shown him, something that he did not receive in Munich, and has repaid it in turn as he has developed into the best defender in Germany. He hoisted the Bundesliga trophy for the first time last season, and now at 23 years of age, is aiming to repeat the previous year's success. It just happens to be that on Wednesday, he takes on his former employers - against whom he has scored twice - in a match that could decide the title early.

As it stands there is no love lost between Bayern and Hummels, whose father was sacked last week after 17 years at the club. The only time fans will see him play alongside Holger Badstuber will be during internationals. For Bayern, he will remain the one that got away.