The Women's European Championships have kicked off! Here is every national team kit from adidas, Nike, Puma and more

The Women's European Championship are taking place in England this year and kicked off on 6 July, when England beat Austria 1-0. It's going to be an amazing month of football, with cities like Brighton and Hove, Manchester, Sheffield, and Southampton all hosting group games.

The rapid growth of the women's game has meant that tickets to the final sold out within an hour of going on sale. However, you can still grab some of the new kit launches for the tournament by top names like adidas, Nike and Puma.

All of the Adidas designs focus on sustainability at the forefront as the shirts are made from materials using Parley Ocean Plastic. The kits were first revealed in a photographic campaign set in the same hotel used to film the music video for Spice Girls 'Wannabe'.

Nike has also released their kits for the English, French, Dutch, Norwegian, Portuguese and Finnish national sides. The brand's campaign for their released kits focuses on paying tribute to those who have helped develop the women's game and the empowering stage it currently is at.

Puma has collaborated with London luxurious brand LIBERTY to create bespoke kits for the Austrian, Icelandic, Italian and Swiss national sides. The designs incorporate floral designs, which are synonymous with LIBERTY London.

Here are all the Women's European Championship you can buy right now: 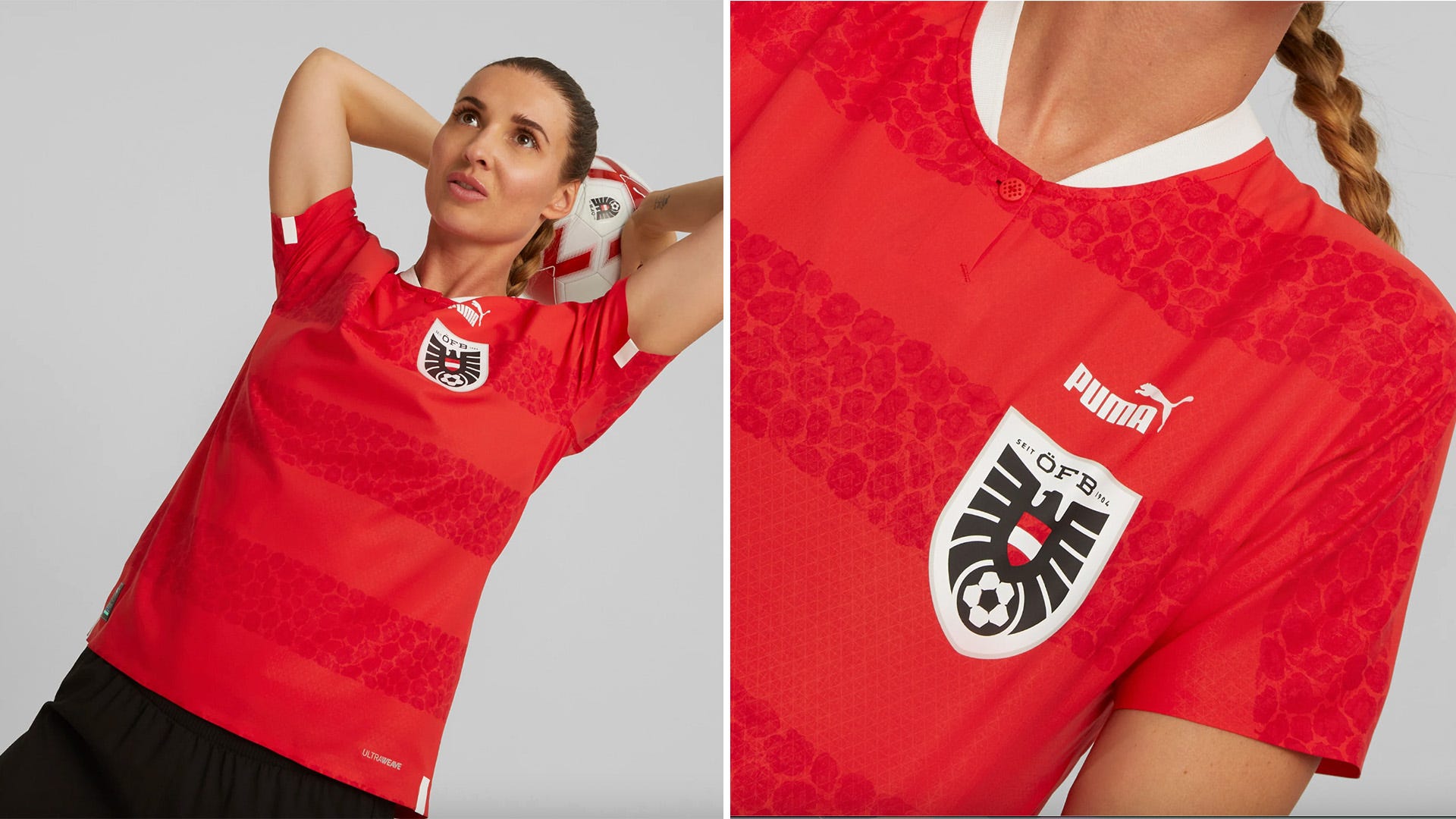 Puma and LIBERTY have worked their magic with this stunning Austria kit. Flower petal designs are used to form horizontal stripes. A buttoned collar adds some nice detailing to a shirt which keeps it classic with the red and white colourway of the national flag. 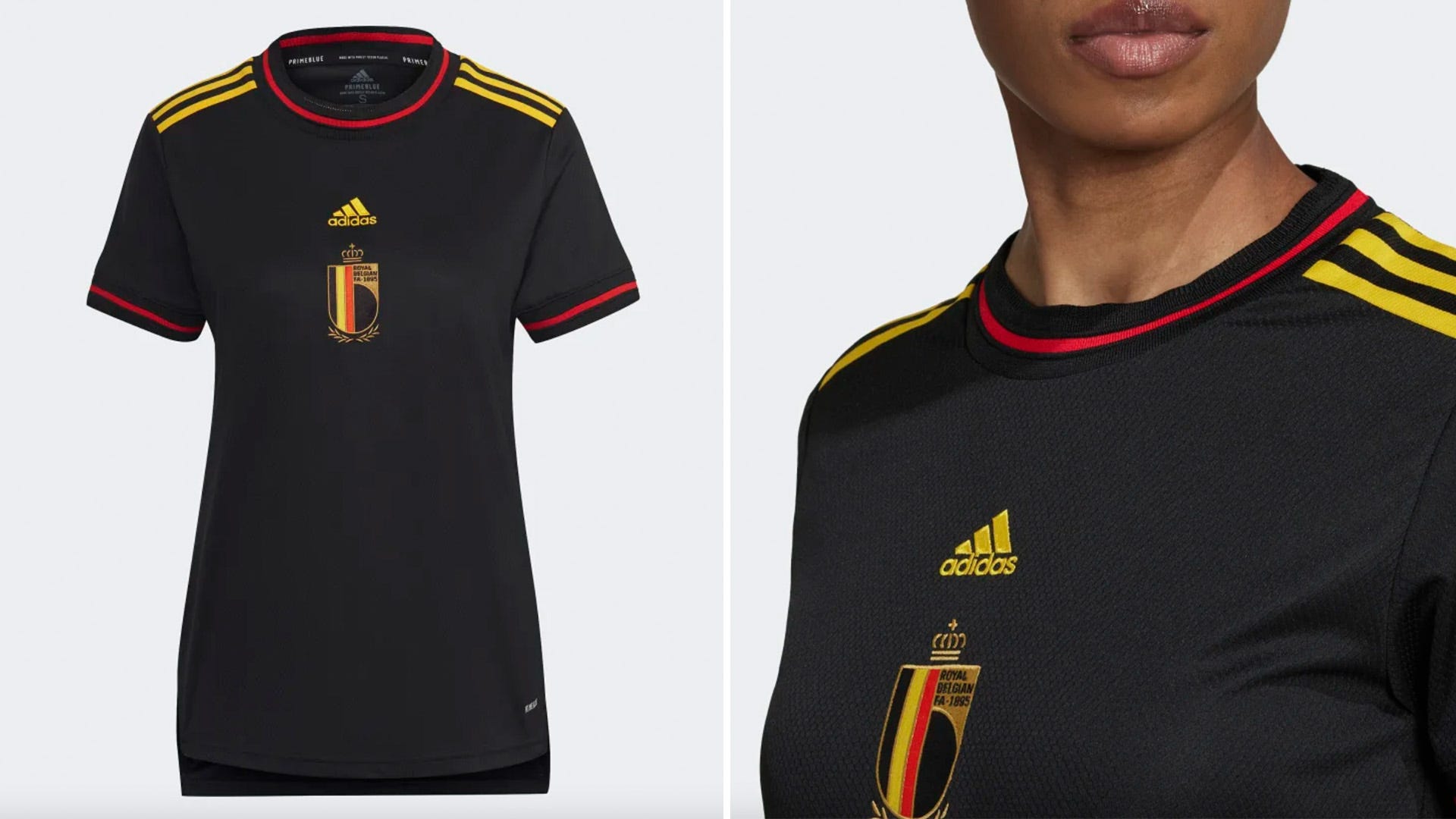 The Belgium national home shirt has pushed the boat out by opting for a black kit rather than their usual red colourway. Nevertheless, it's a sleek shirt with the colours used from the Belgian national flag, particularly with the yellow three stripes and brand logo, which goes well with the red line detailing on the collar and sleeves.

Graphic lines are at the centre of the Danish home shirt, which illustrates the theory that it usually takes 10,000 hours to become good at discipline. It pays homage to the work and effort the Danish women's football team put into becoming the players they are today. 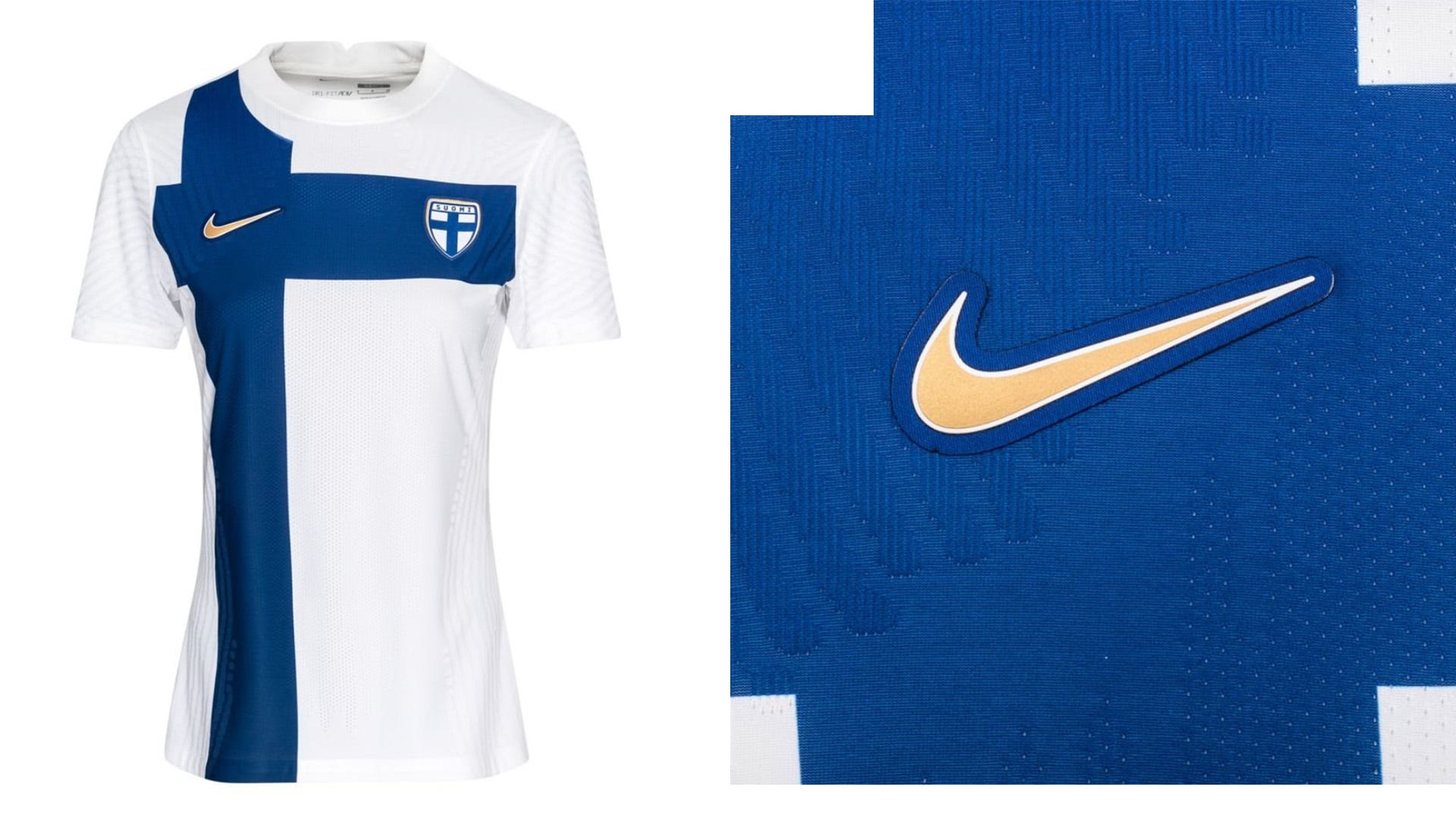 Finland's home kit is simple yet very effective, with a design that emulates the national flag. Two blue stripes run to meet together on the right-hand side. The sleeves feature some intricate detailing with fin lines running diagonally to create an abstract pattern. 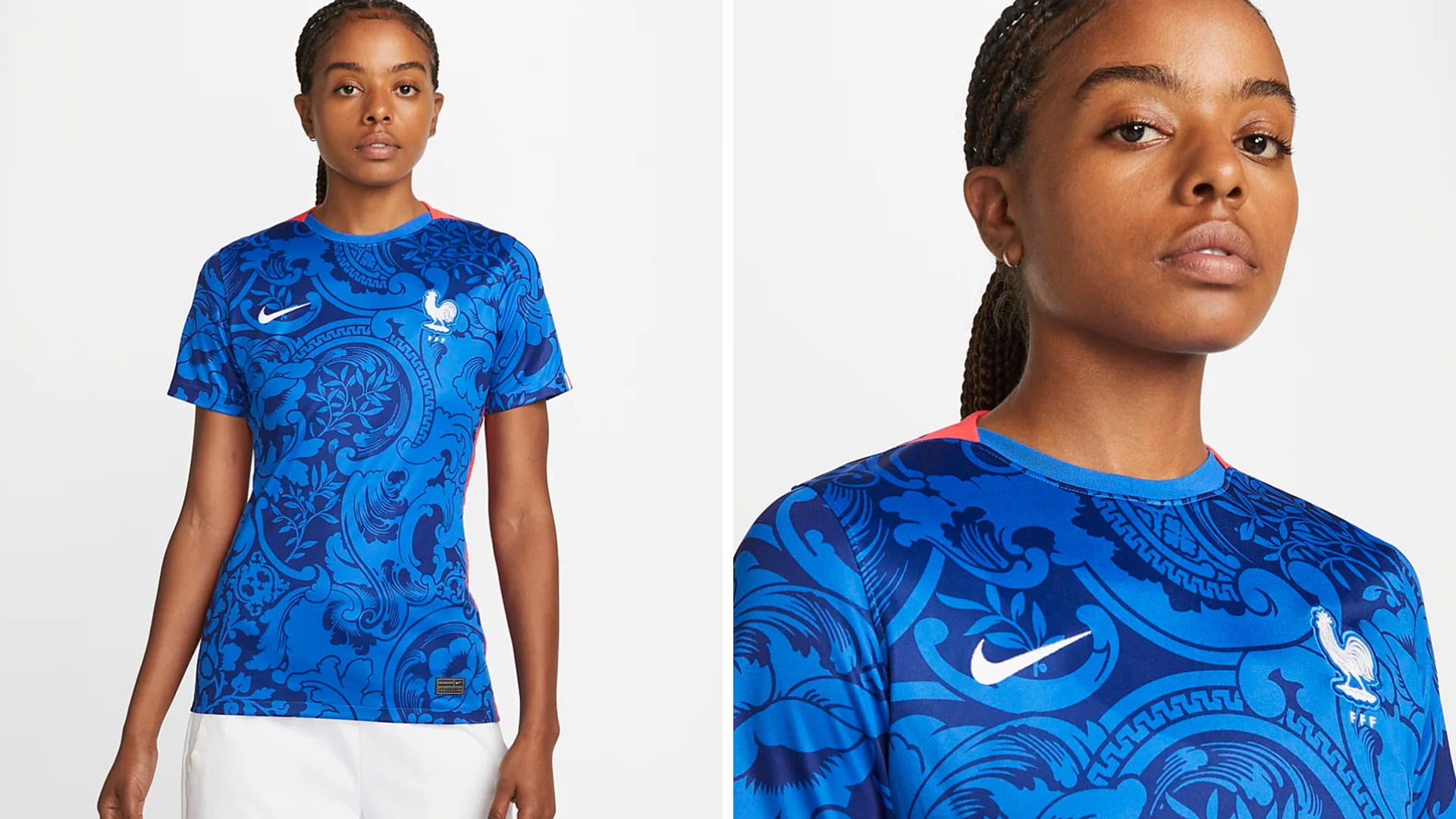 The French home kit gathers its usual royal blue colour, but Nike has added a twist with a decorative design. The print takes inspiration from and references neoclassical art and architecture. This is combined with the nation's tricolour to form the full kit: a blue jersey, white shorts and red socks. 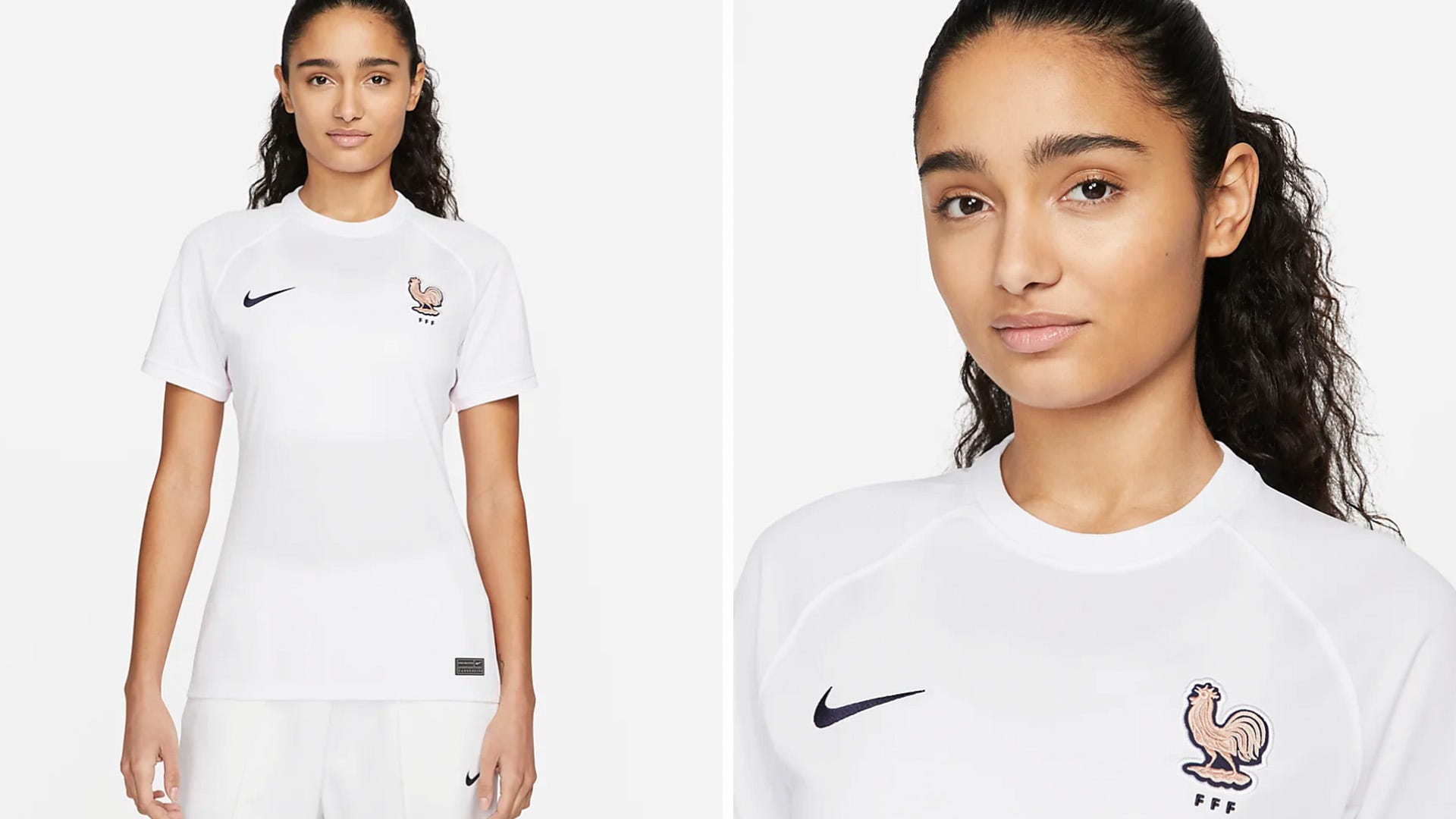 Nike has nailed down a sleek and modern away kit for France, which is simply white with a rose pink national crest. A light pink embroidery strip also runs down each side of the shirt with the french flag on the outer left sleeve completing the look of a classic-looking French away shirt. 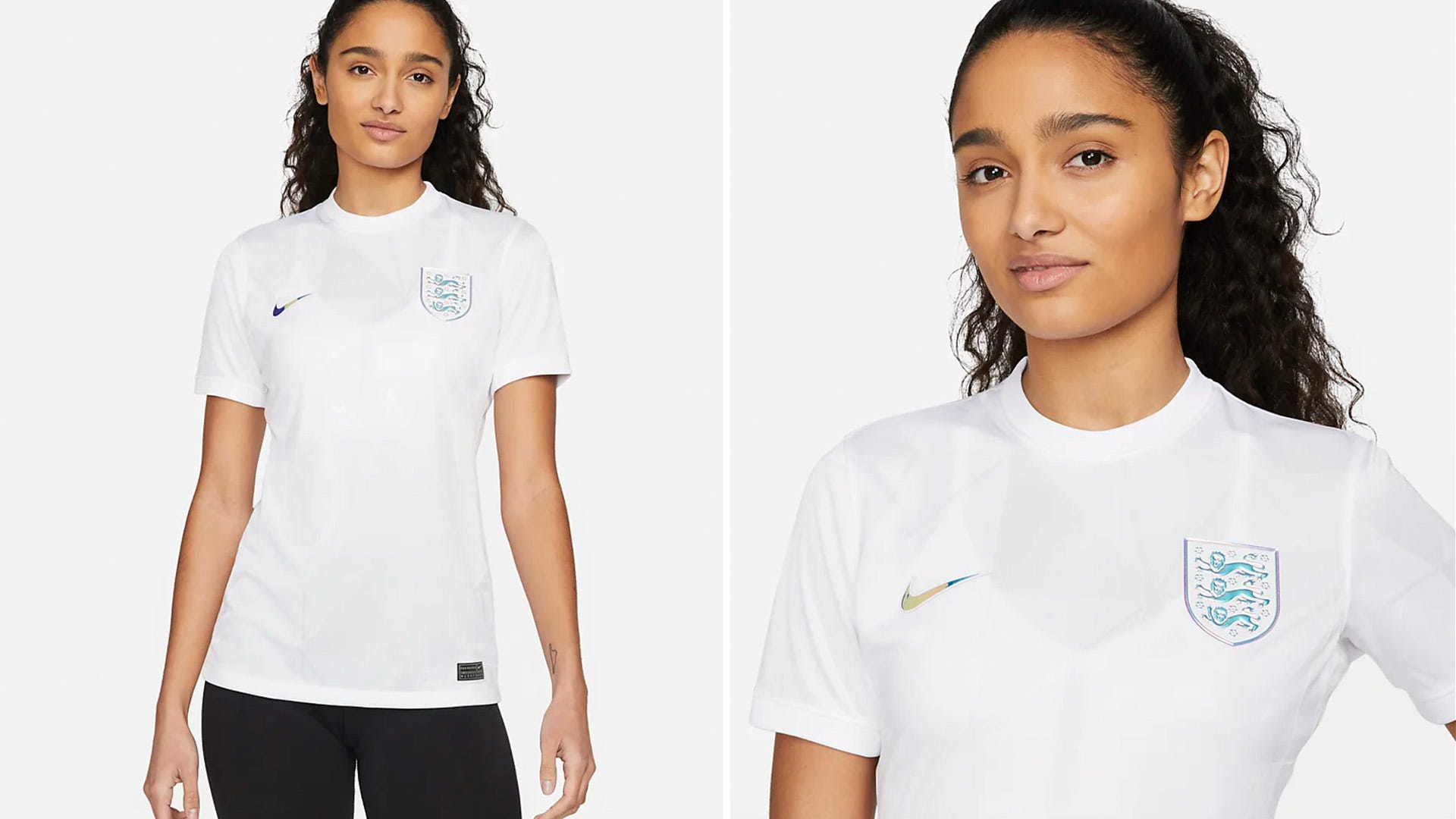 The England home kit is constructed using a bespoke knit pattern which references the angular line of cut diamonds. This fine detailing pairs well with an iridescent glow added to the national team badge, which ties in with Nike's message of paying respect to the players who have made women's football what it is today. The singular triangular cut at the back of the collar finishes off the look in another great take on the classic, white England home shirt. 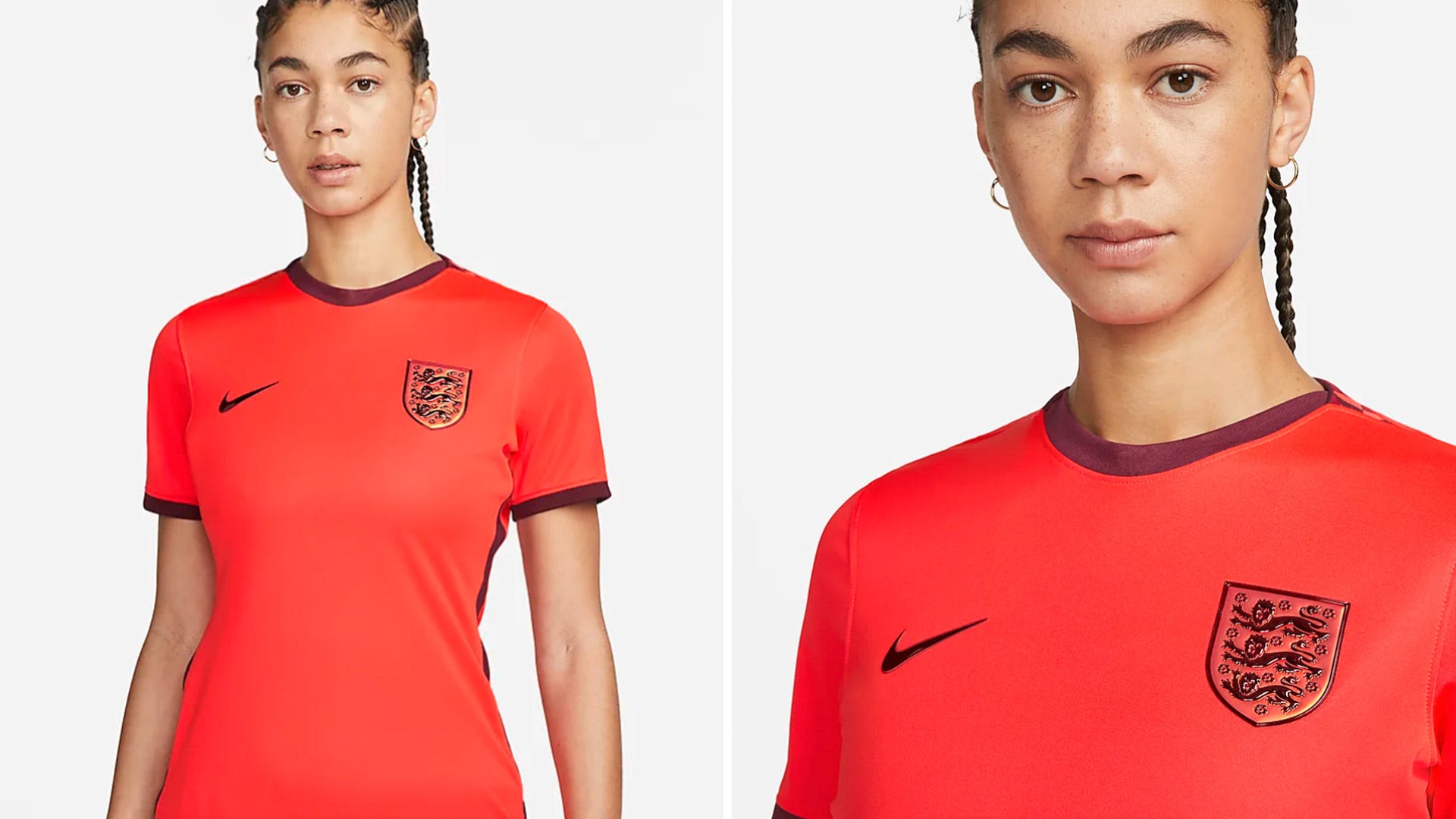 Nike has gone bold with a crimson colourway for the away kit to create a national team shirt, unlike anything that's come before. Once again, the badge has a pearl-like iridescent glow which almost looks like fire members with a red colourway. Maroon on the collar and sleeve lines add a nice contrast, whilst the triangular theme in the embroidery at the back of the collar is brilliant little touch to carry on their diamond theme. 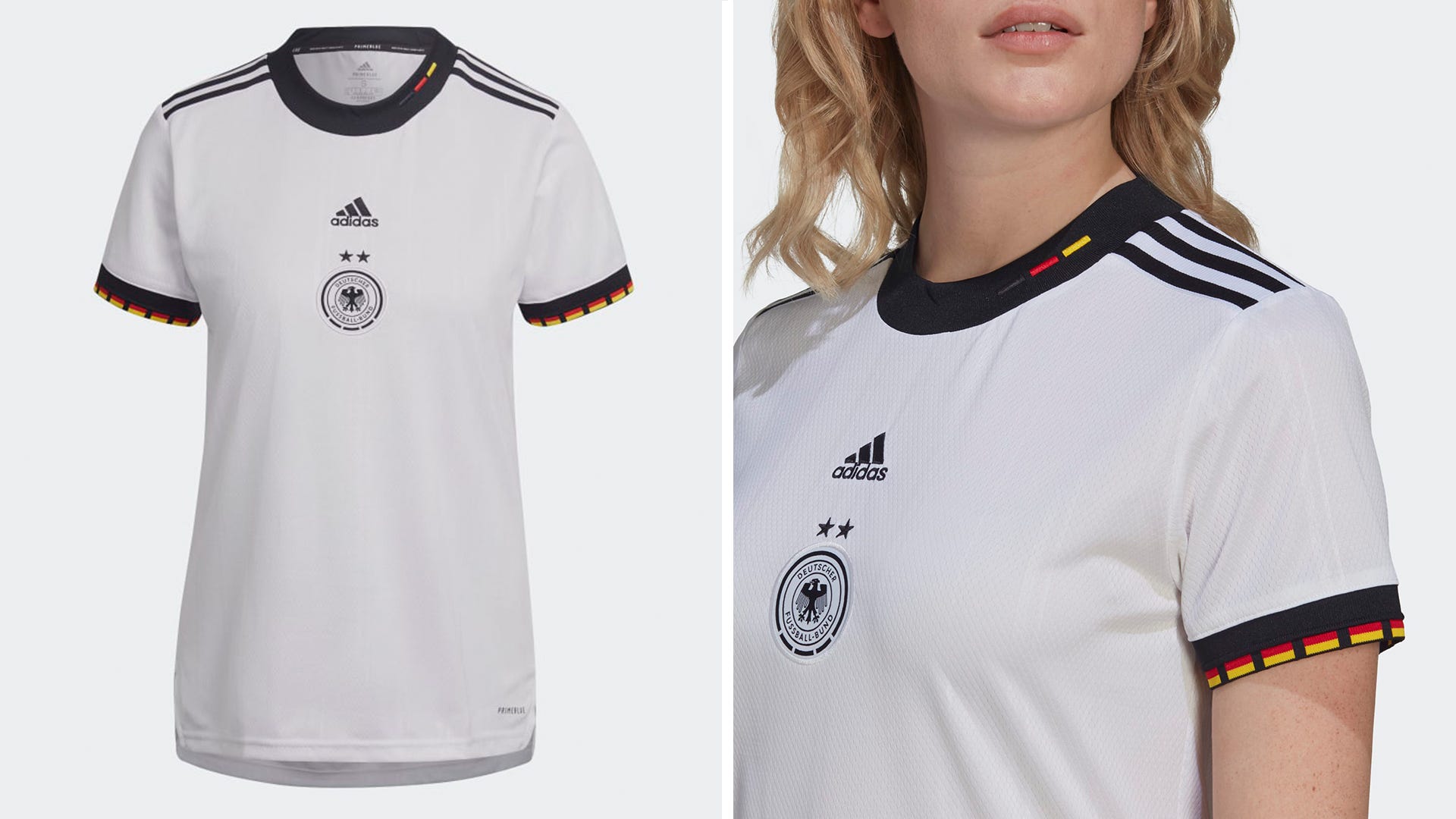 Germany has gone with a classic white home shirt that is synonymous with them. But it's all in the sleeve details which don little squares of the colours of the German flag - black, yellow and red. It creates a pattern which makes the sleeves pop - the same effect is repeated once on the left side of the collar. 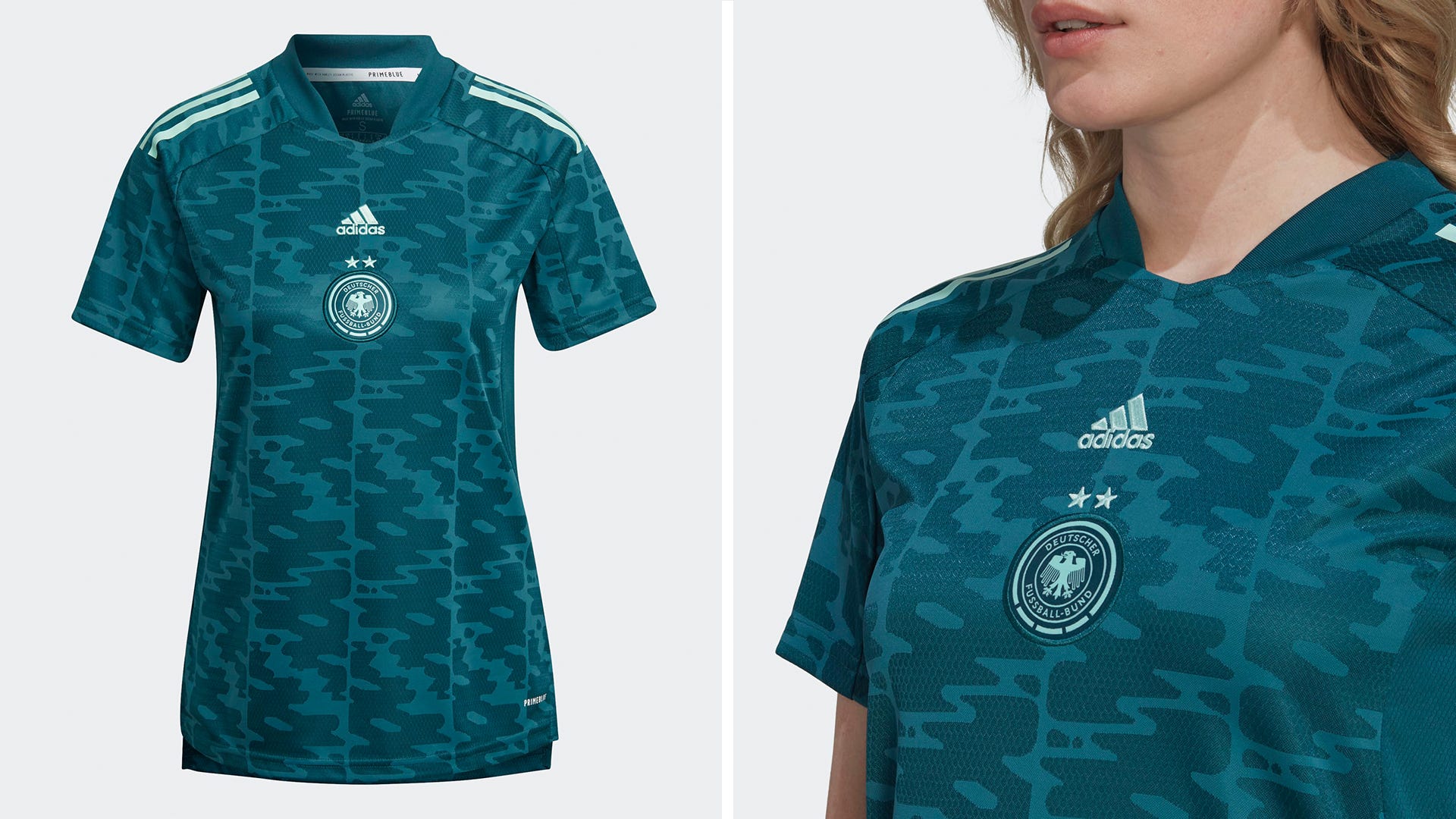 By contrast, the away shirt comes in a teal colourway, with a unique abstract pattern which looks like moving water. It's also a throwback to a similar colourway the men's team used during the World Cup in 1996. The German woven crest at the centre of both shirts finishes off the look.

Get it from Adidas for £70.00 / Not currently available in the US 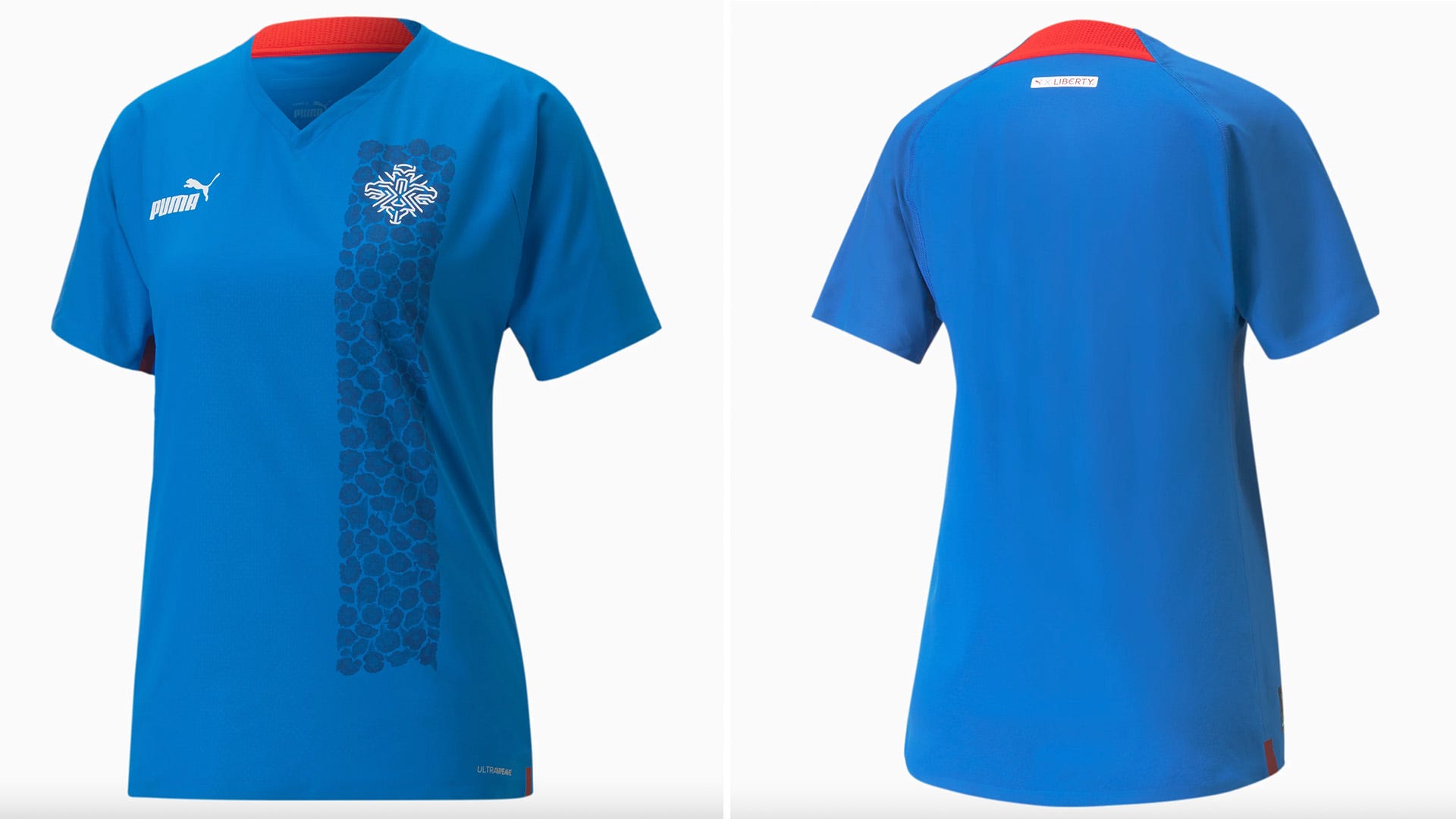 LIBERTY's hand-drawn florals are used in a simple but effective way on the Iceland shirt to create one strip down the left side. It aligns with the intricate white Icelandic badge, drawing your eye to its unique design. 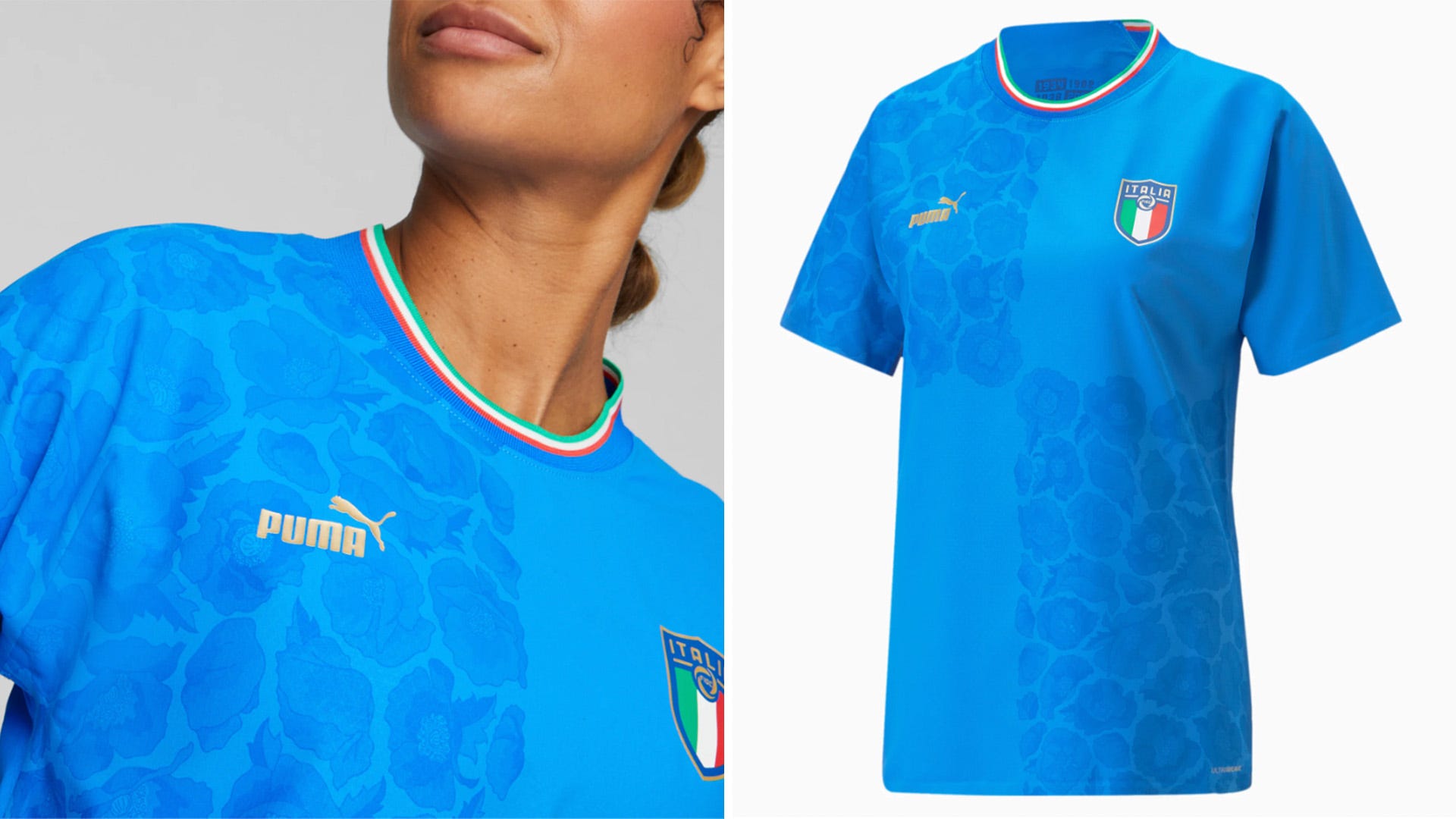 The Italian home kit is a contender for the best shirt of the tournament thanks to the intricate, hand-drawn floral designs by LIBERTY. Each square panel on opposite corners of the shirt emulate a tile-like design. Italian flag collars around the collar with the gold PUMA logo and Italian crest tie up the look. 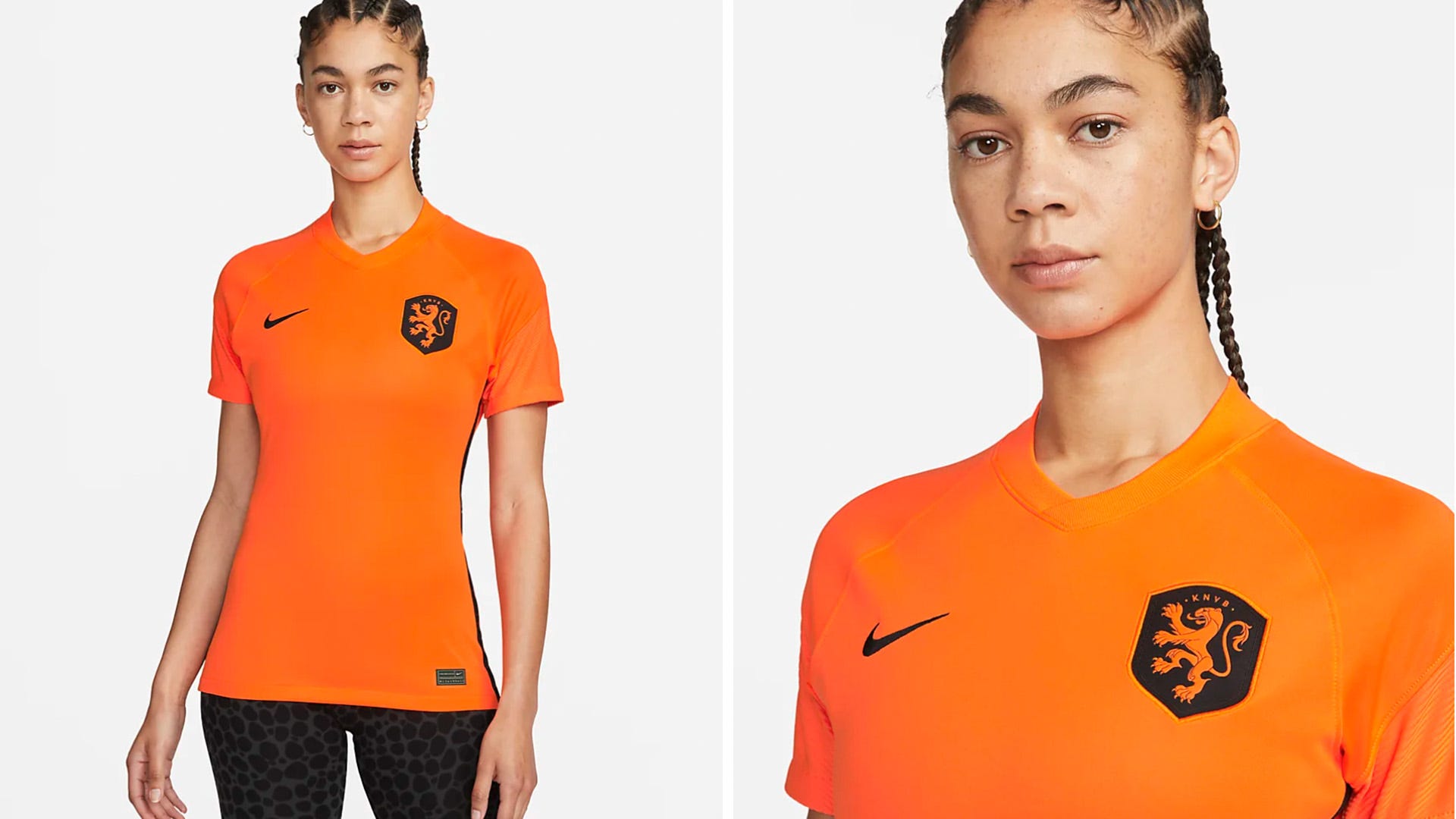 Nike has stuck with the tried and tested Netherlands home kit we have been used to seeing throughout several football tournaments. But, they've also revitalised the nation's classic orange jersey with a stylish new edge of a complimentary black trim. The abstract embroidery on the trim runs down both sides of the shirt. 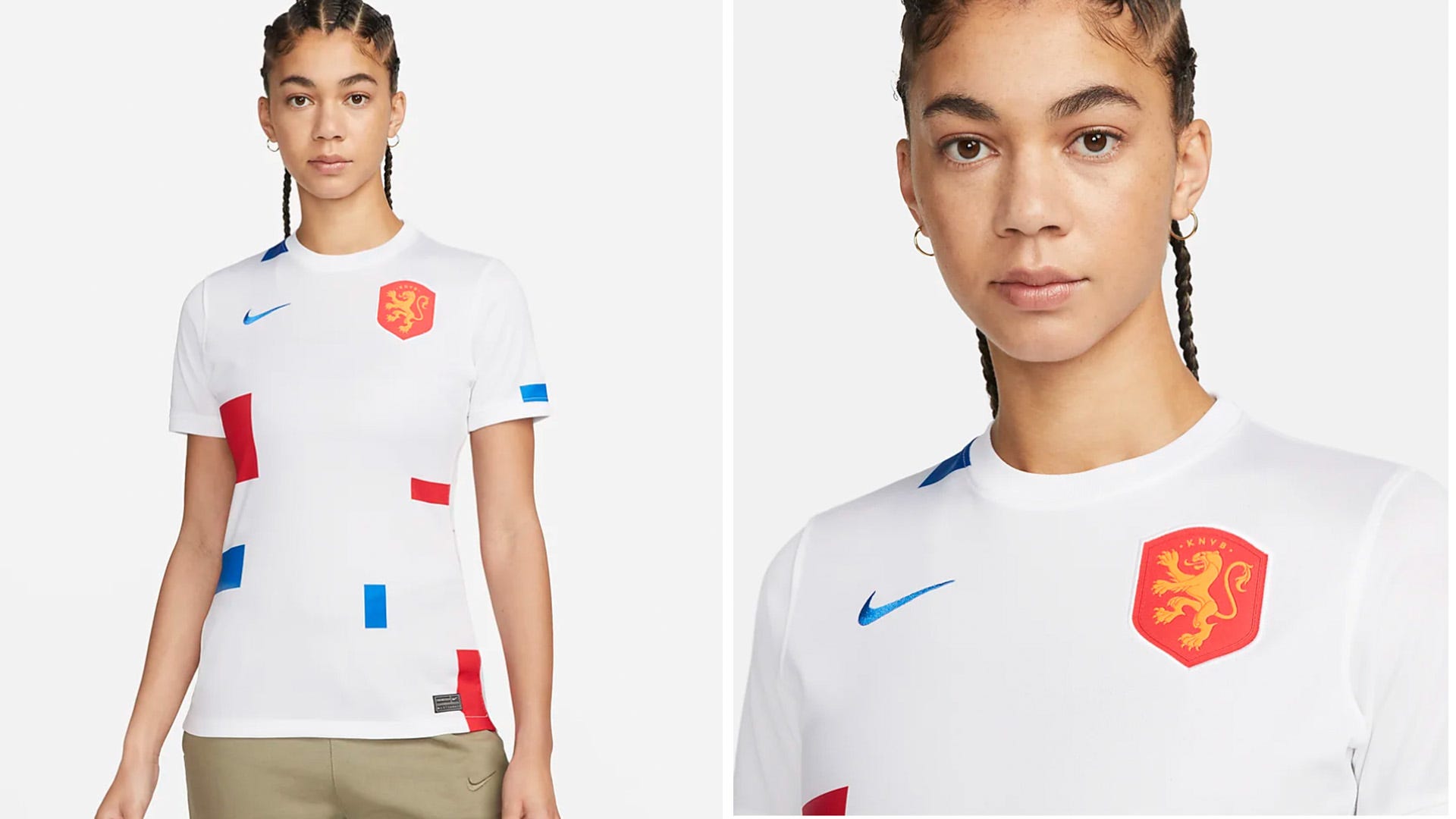 Sticking with the abstract theme, the away shirt draws inspiration from De Stijl, which is proudly a Dutch art movement. Colour blocking blue and red square rectangular shapes are randomly placed on the shirt to achieve the art movement's colourful aesthetic. A blue embroidered swoosh and national crest complete the look. 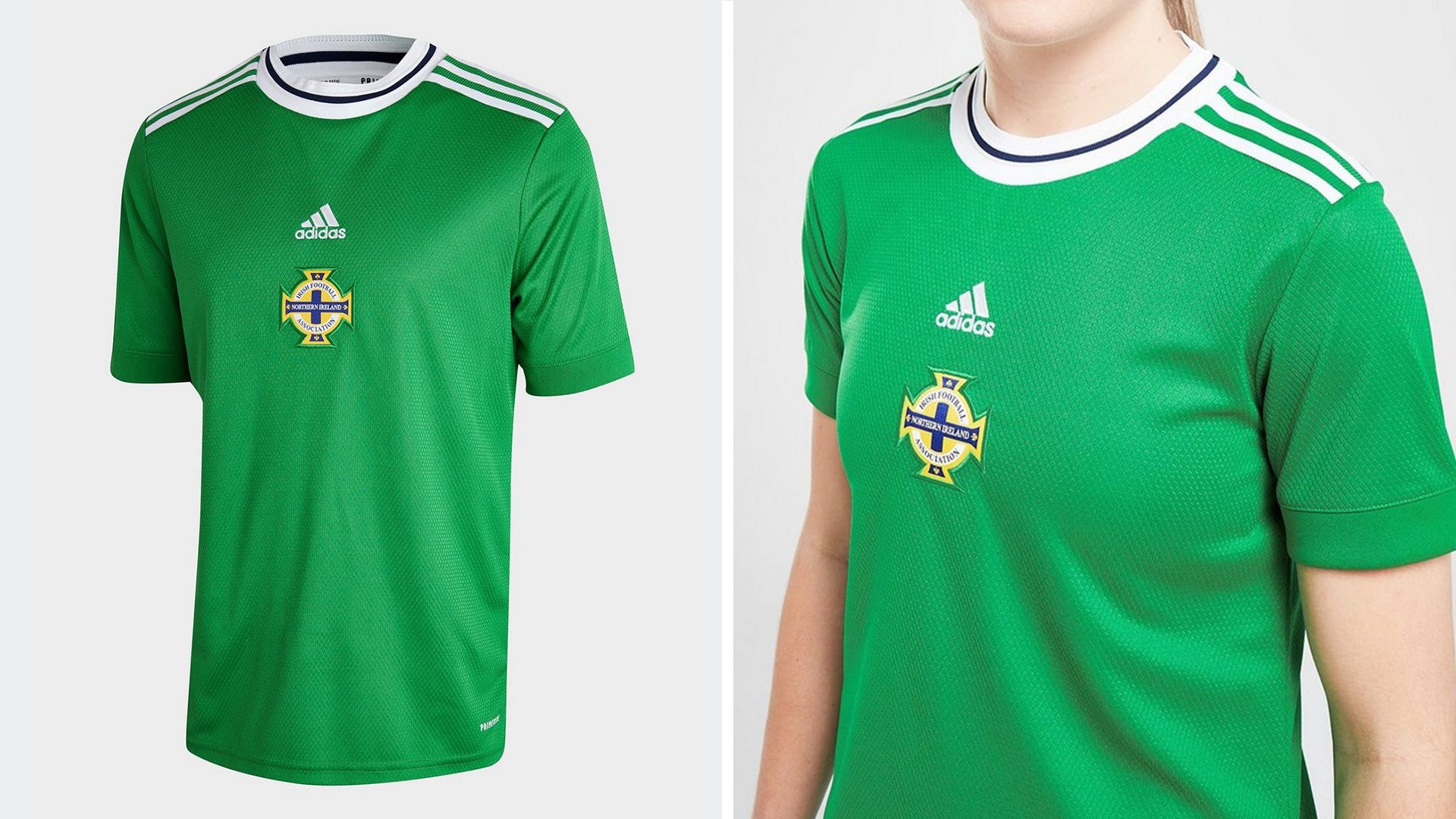 Thus far, Adidas has only given Northern Ireland a new home kit. It's a simple but effective kit with a nod to previous classic Northern Ireland shirts. The grass green shirt, with the traditional round white collar and plain sleeves, makes it an effective colourway. A bright pop of colour comes from the yellow on the national badge.

Get it from JD Sports for £65.00 / Not currently available in the US 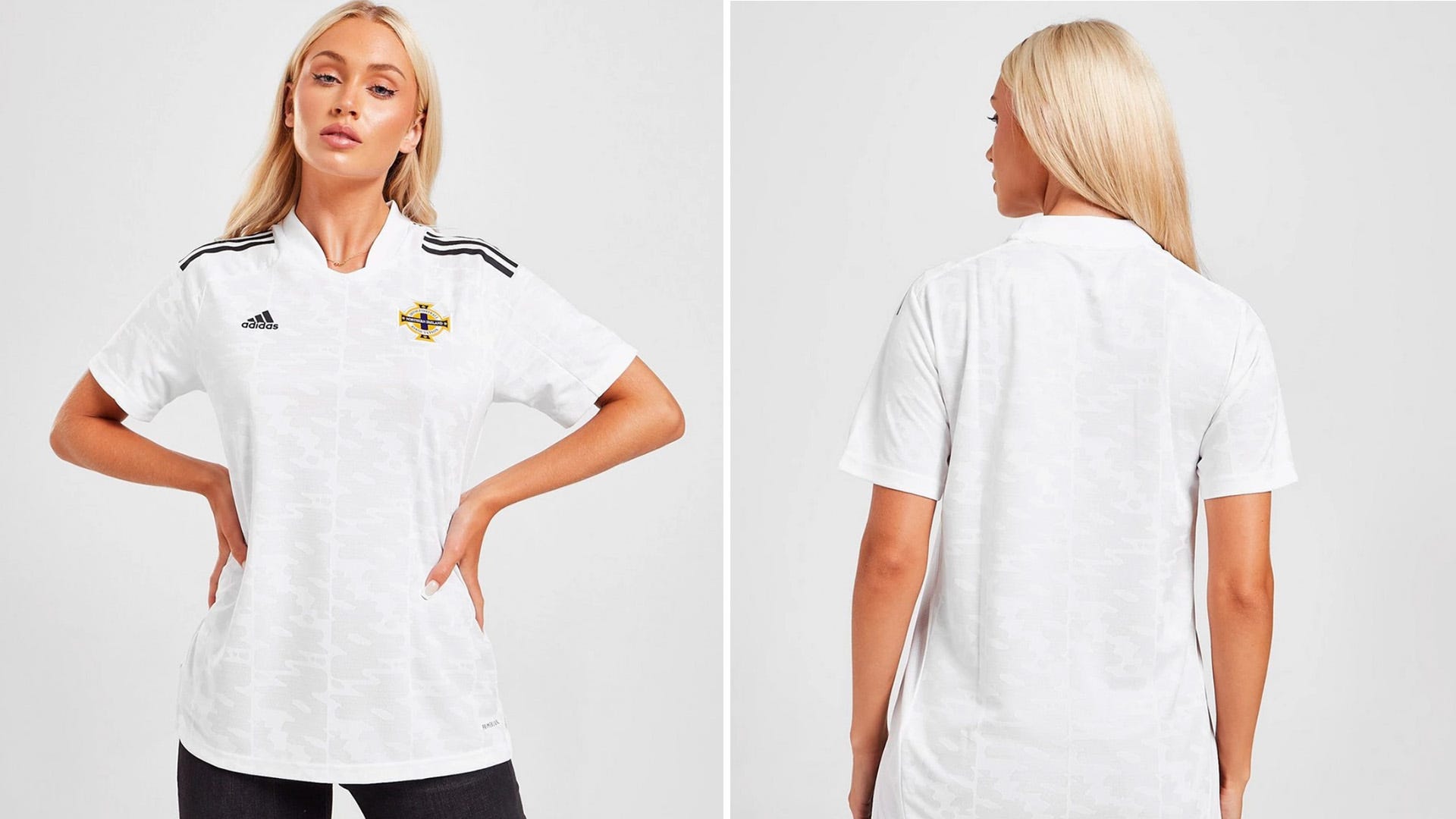 The subtle grey camo print on this white Northern Ireland away shirt takes inspiration from water in motion. Adidas has also used a new hem style to not restrict players' movements. A V-neck collar sits centre of the famous three stripes on each shoulder.

Get it from JD Sports for £65.00 / Not currently available in the US 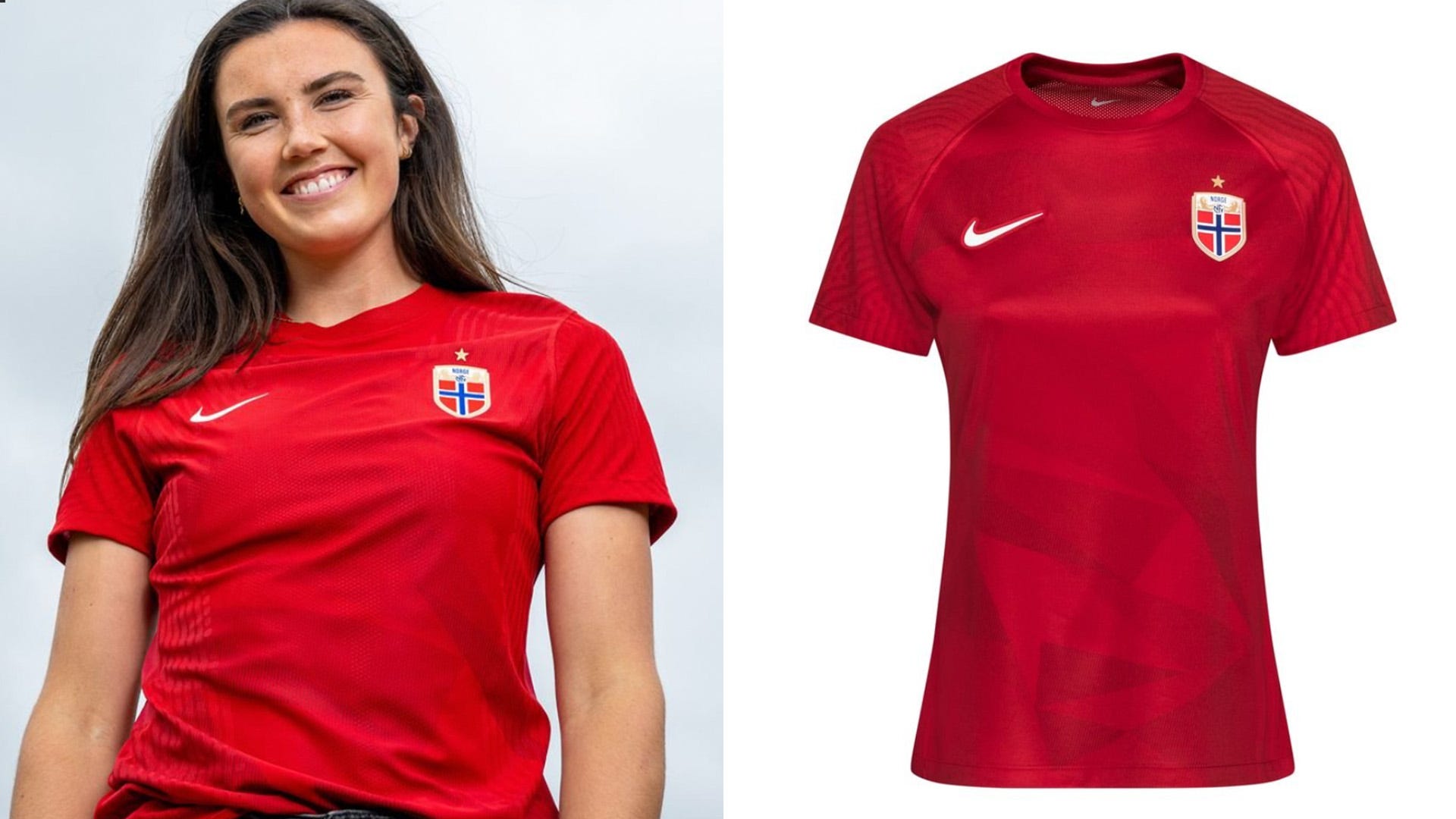 The triangular pattern on the shirt represents the mountains in Norway and natural landscapes. A soft groove pattern on the sleeves adds some interest to an otherwise classic Norweigan shirt which the men's team will also don during the 2022 World Cup. 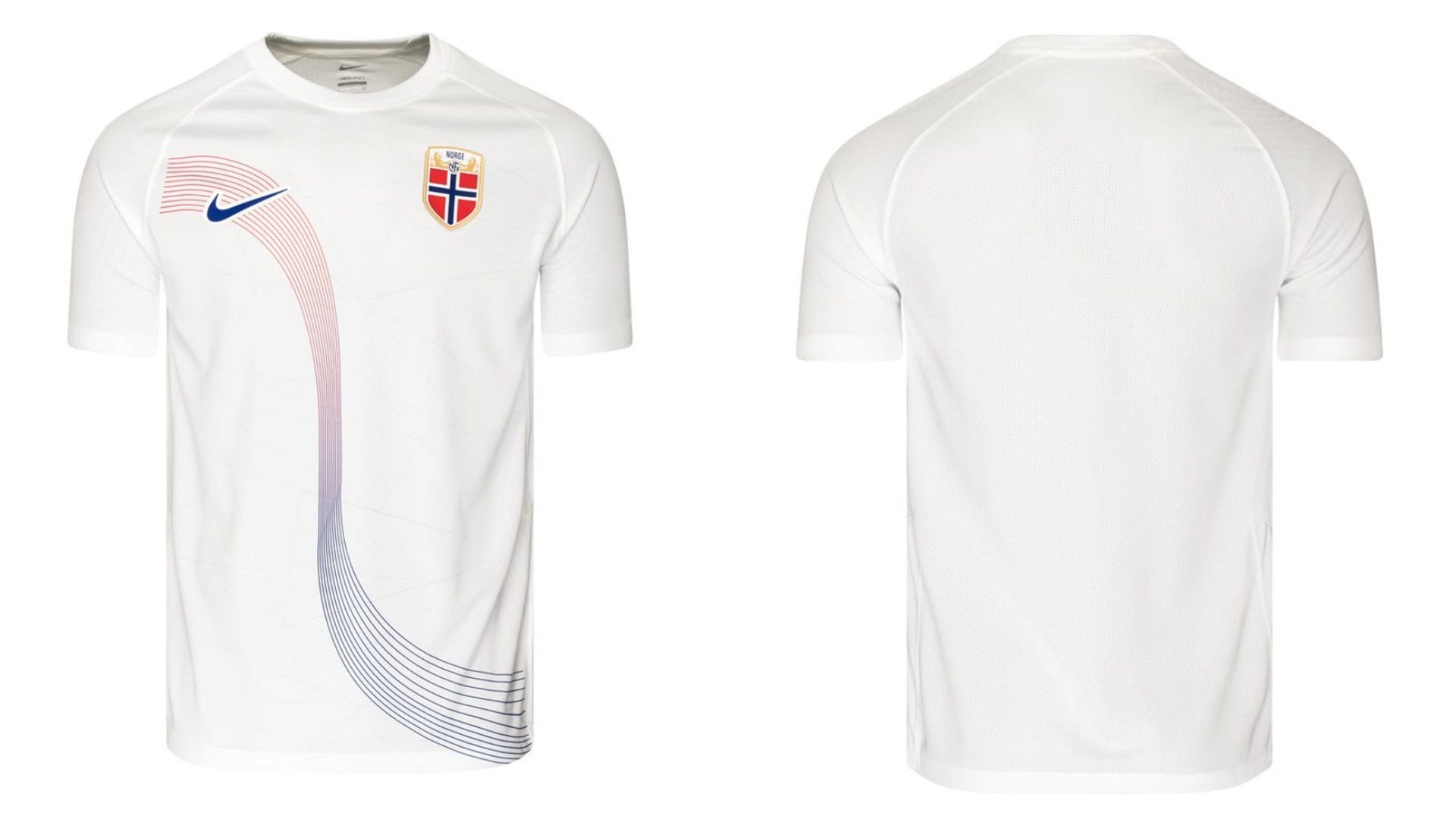 The Norweigan away shirt features a sleek design with 12 lines turning from red and blue at the front of the shirt. The 12 lines that curve are designed to mimic the country's many fjords and invoke the vision of Viking ships. But, the 11 lines represent the 11 players on the pitch, with the 12th line paying homage to the Norweigan fanbase. 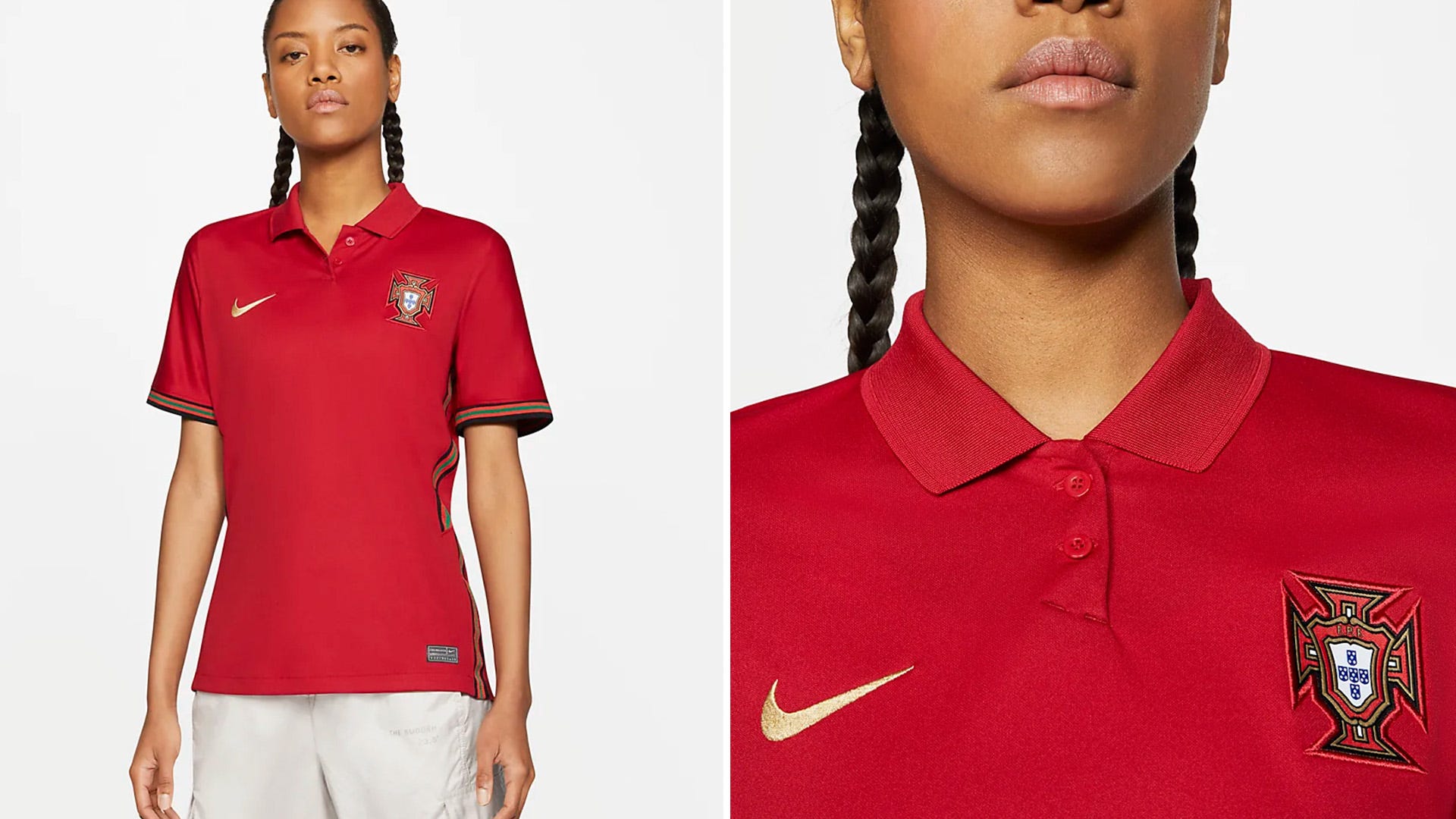 The Portugal kit is understated yet stylish with key details. The shirt's side and sleeve cuffs feature red and green which make up the national flag. A gold embroidered Nike logo on the right adds some much-needed pop of bling. 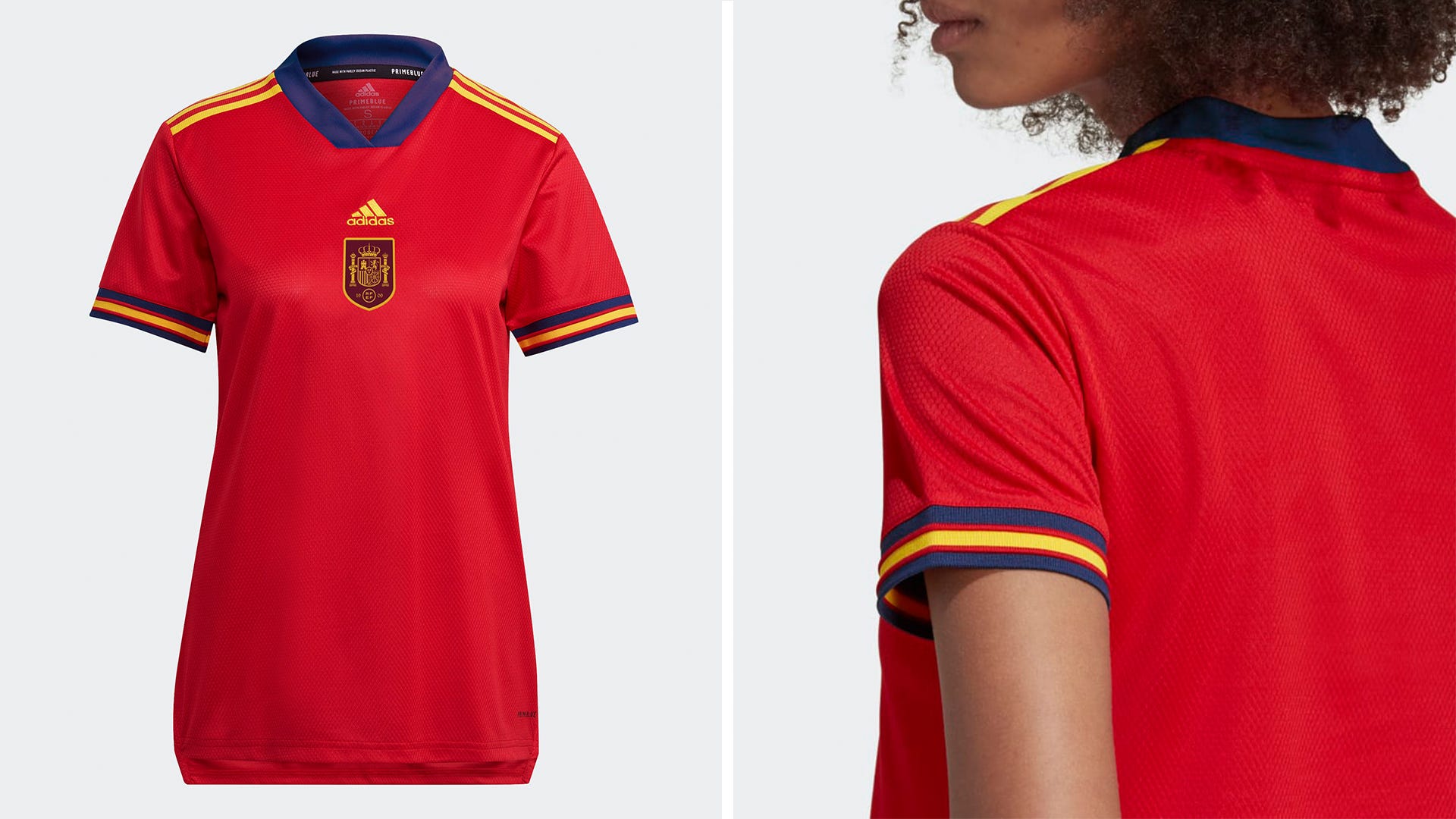 The Spain home kit is very classic looking and will be familiar to those who follow major international tournaments. The simple red colourway with navy and yellow detailing on the sleeve cuffs is lovely. The bold navy collar gives the shirt some character, with the entire design a throwback to the '90s style of Spain national team home shirts. 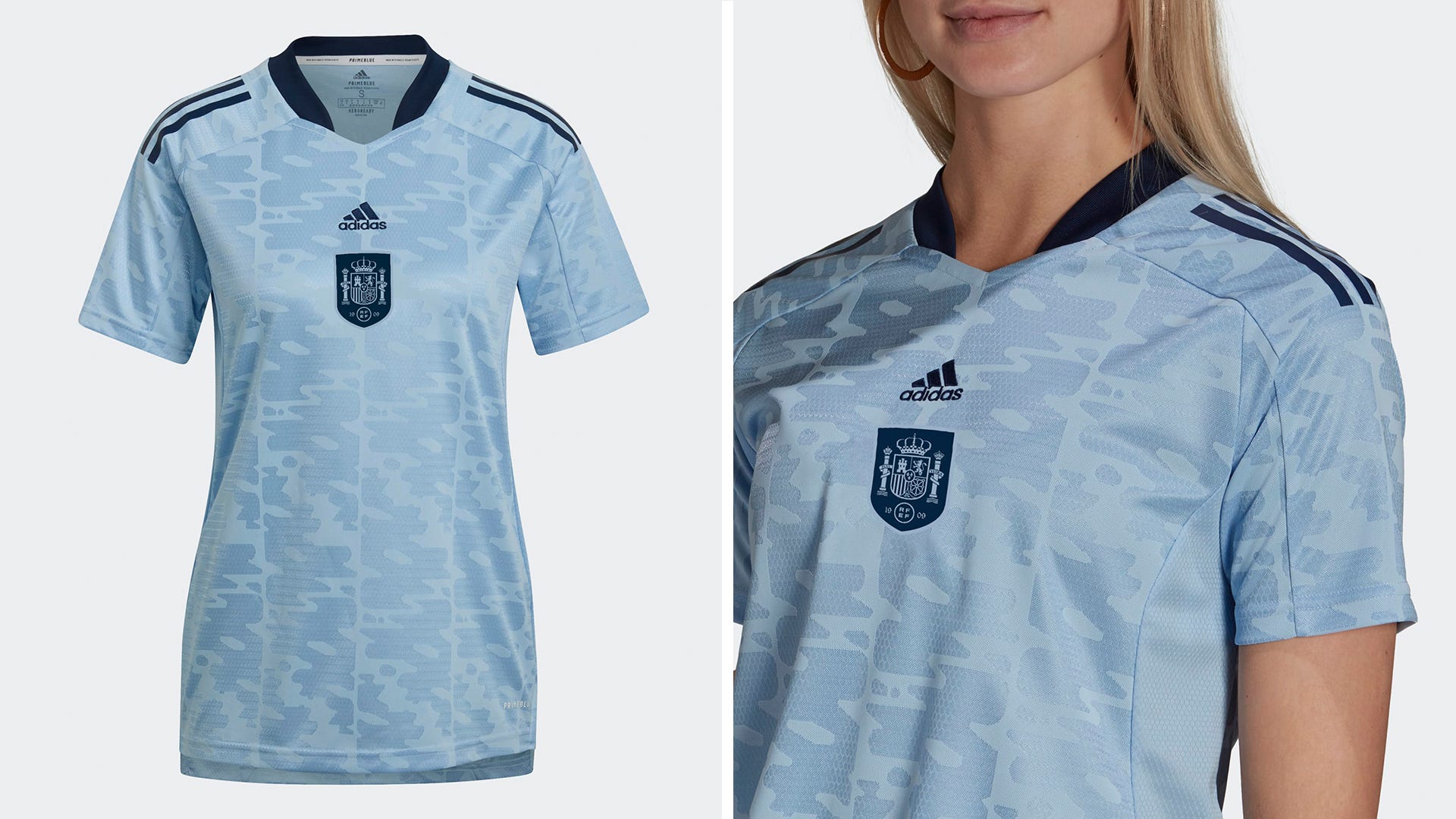 A more light and airy approach has been taken on Spain's away shirt, with the same template featured on Germany's away shirt. The colourway on the Spanish away kit is metallic blue, which looks more like clouds floating through a blue sky than water. Every detail, including the national emblem, adidas logo, and stripes, is in navy blue, which gives a nice contrast.

Get it from adidas for £70.00 / Not currently available in the US 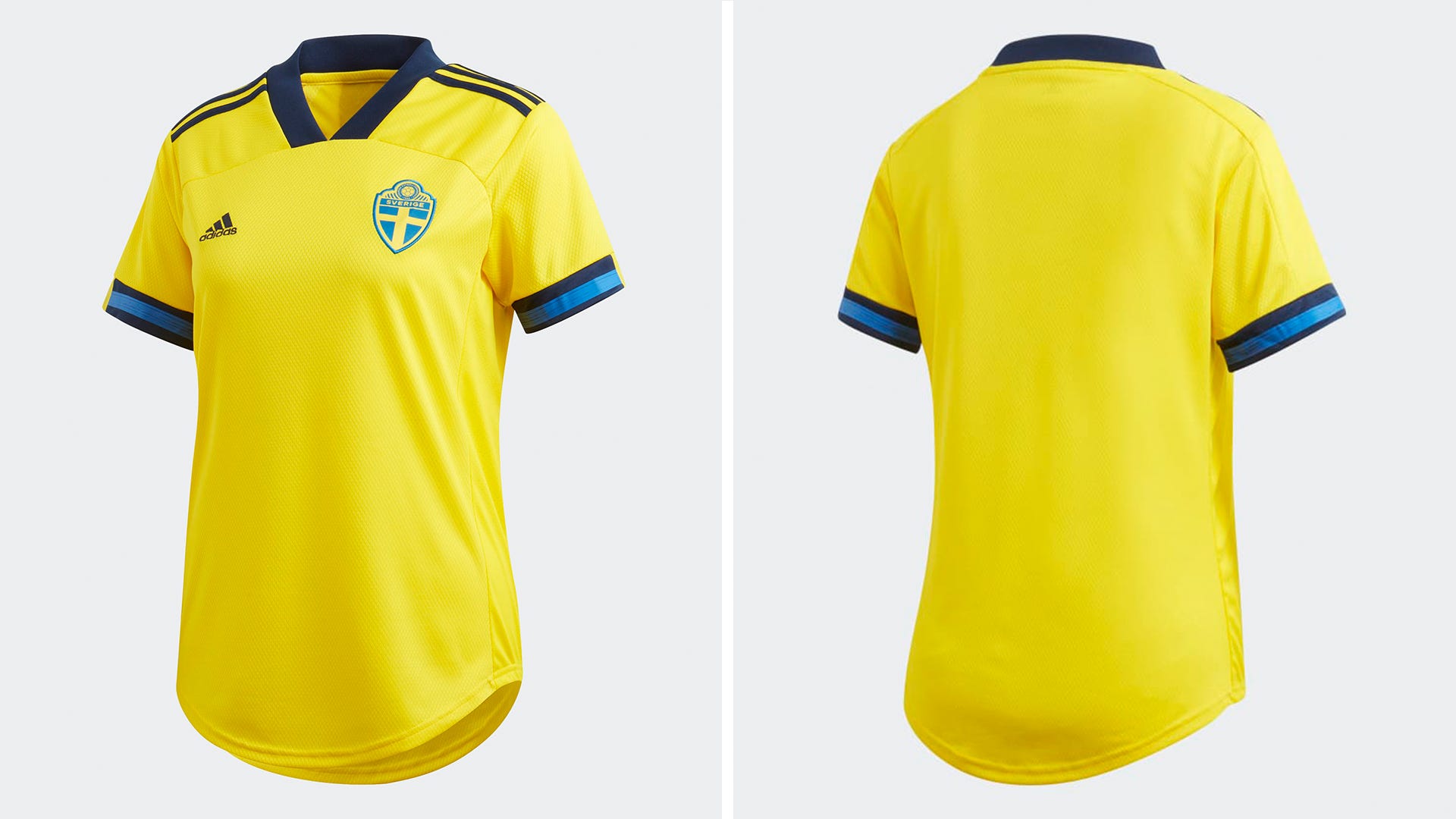 Sweden went with an audacious campaign behind their home shirt for the Euros this summer. Adidas created an entire campaign around giving the country's opponents every detail on each of their players, called 'How To Stop Sweden'. The shirt itself shows the classic yellow and blue national colourway. A nice little detail at the back of the collar featuring the word 'Sverige' showcases the Swedish pride.

Get it from Adidas for £49.00 / Not currently available in the US 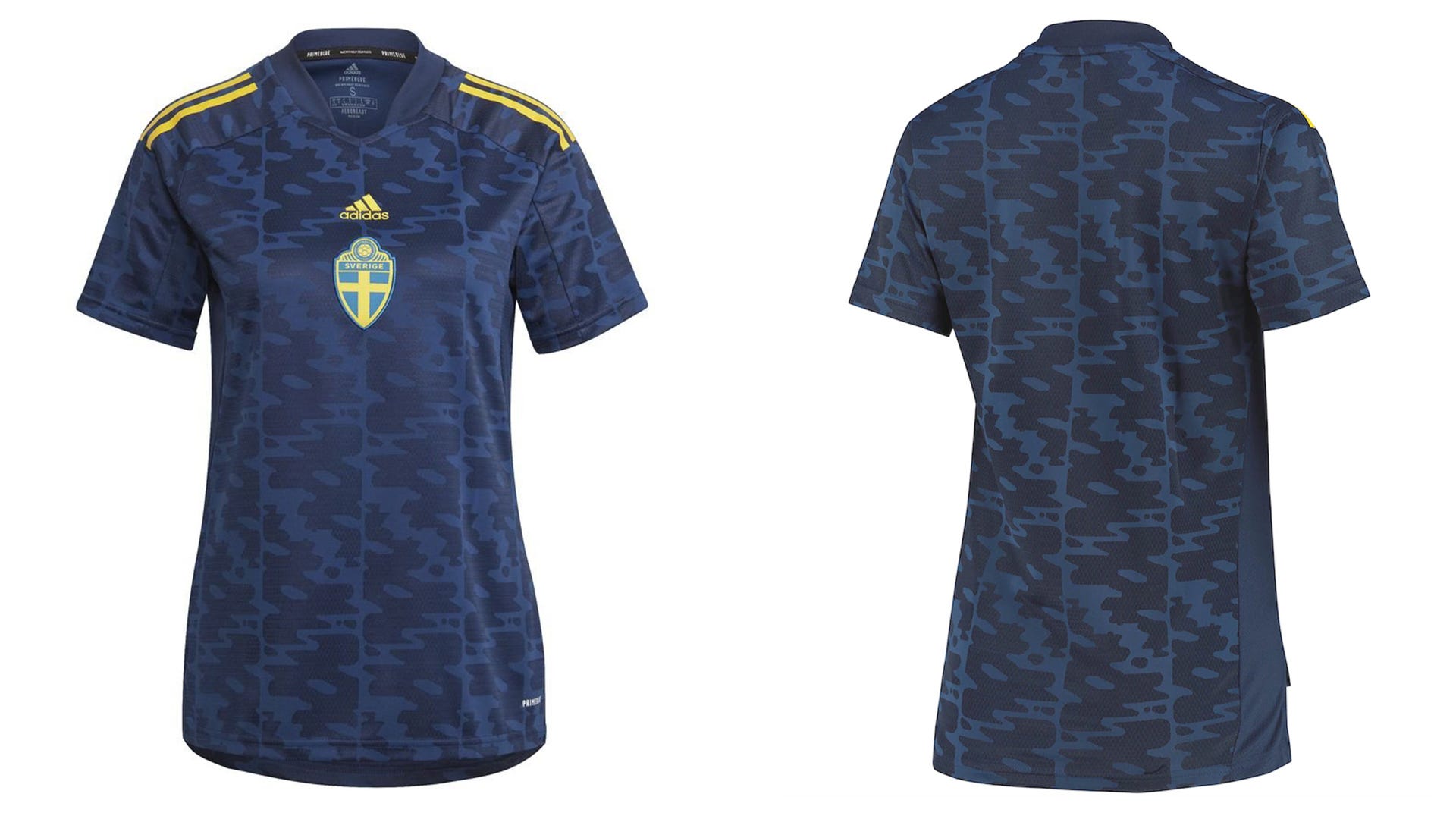 Sweden's away kit gains its inspiration from the Swedish coastline. The dark navy colourway features a wavy design on the shirt, with a wavy silhouette on the collar. The Adidas logo's bright yellow brand detailing and three stripes make the shirt pop with colour. 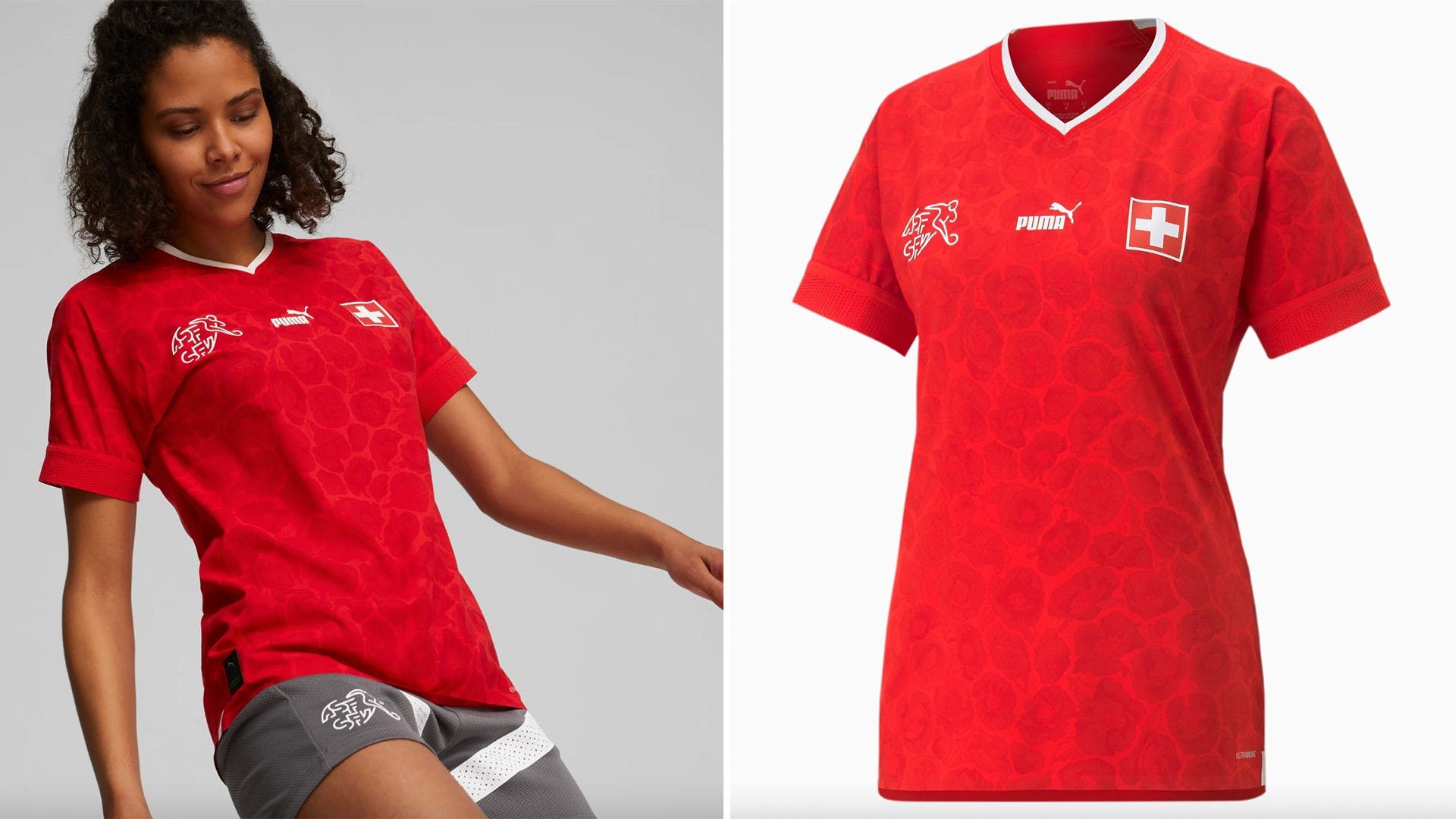 Large floral prints are the stars of the show on the front of the Switzerland home shirt, which almost takes on a subtle catalogue look. Mesh sleeve colours add a bold texture, whilst the bold white-collar keeps in theme with the national flag.