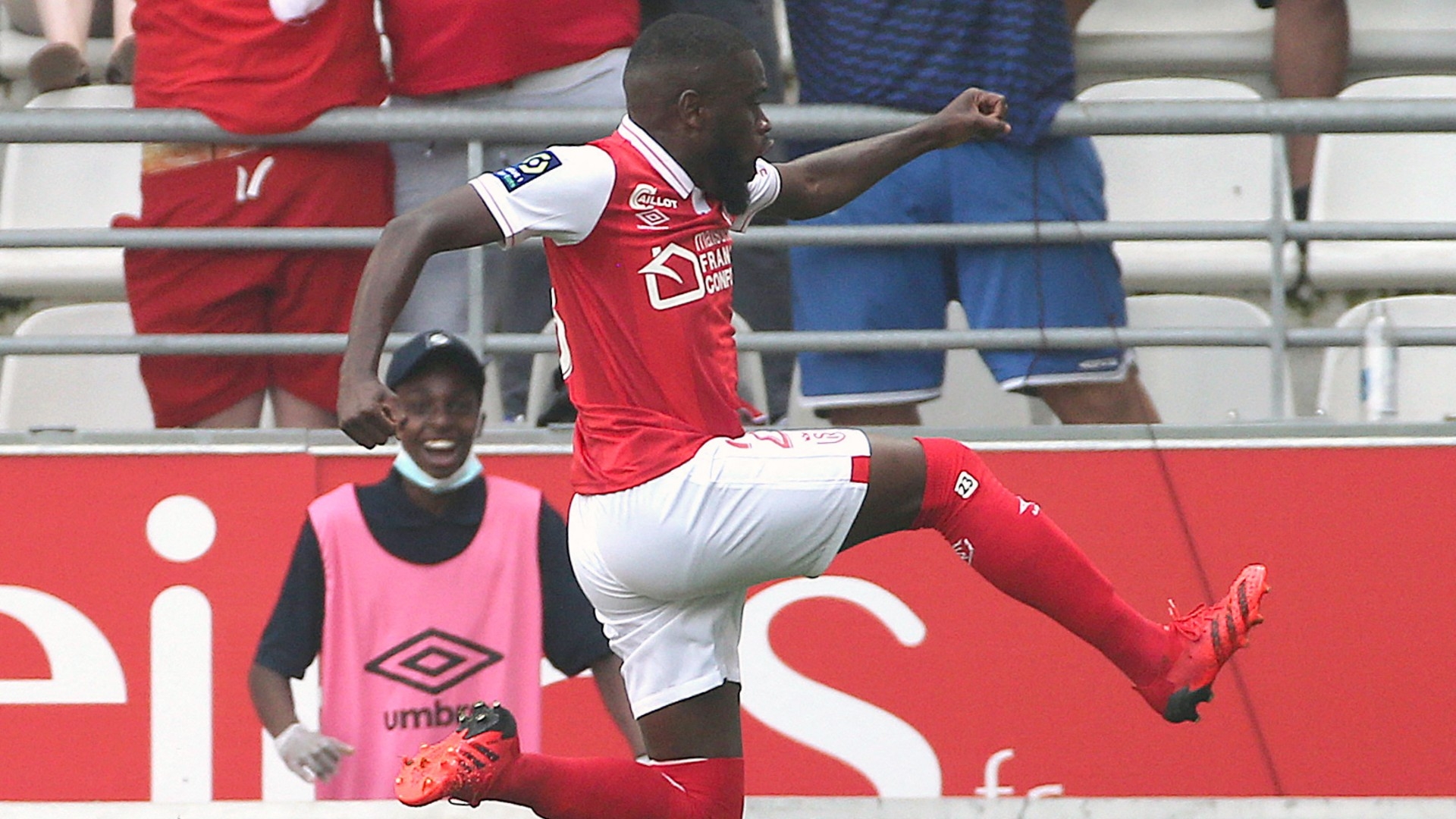 Africans stars had a fine weekend in the French elite division, but it was a sour one for the Burkina Faso star who was given his marching orders

Serhou Guirassy was on target for Rennes as they settled for a 1-1 draw with Brest in Sunday’s Ligue 1 encounter.

Having played out a 1-1 draw in their opening match of the 2021-22 campaign versus Lens, the Red and Blacks travelled to Stade Francis-Le Ble with the ambition of picking up their first victory.

After a goalless first-half, super-sub Guirassy – who was brought on for Jeremy Doku in the 76th minute – put his side ahead six minutes after his introduction.

Birger Meling whipped in a superb cross before the former France youth international of Guinean background rose above his markers to power a header into the bottom corner of Marco Bizot’s goal.

At the Stade Gabriel Montpied, newly promoted Ligue 1 side Clermont Foot continued their 100% start to the French top-flight campaign after they brushed aside Troyes 2-0, with Mohamed Bayo bagging a brace.

The visitors' hopes of picking up an away victory suffered a massive setback as Issa Kabore was given his marching orders in the 33rd minute. The Burkina Faso international was shown the way out after a second caution.

Following up on his goal against Bordeaux and capitalising on Troyes’ numerical disadvantage, the Guinean forward gave the Lancers a 53rd-minute lead after converting from six yards.

Thirteen minutes later, he sealed all points for his team after crashing Jason Berthomier’s assist at the back of Gauthier Gallon’s net.

With this result, Clermont became the first team since 1969 to win their first two games in a debut elite division campaign.

In another fixture, Nigeria international Moses Simon got a brace of assists as Nantes secured a 2-0 victory over Metz.

Fuelled by their 1-1 against AS Monaco last time out, the Yellow House put up another impressive showing to get their first win of the season.

Nantes got off to a flying start, taking the lead after 12 minutes through DR Congo prospect Randal Kolo Muani after he was teed up by Simon.

They doubled their advantage four minutes into the second half with the Super Eagles man the architect again as he set up Ludovic Blas.

Alongside Cameroon’s Jean-Charles Castelletto, man-of-the-match Simon was in action from start to finish for Antoine Kombouare’s team.

Elsewhere, Guinea Bissau international Moreto Cassama was on target twice as Reims played out a 3-3 draw with Montpellier.

Reims took the lead for the first time after the African star completed his double in the 26th minute.

In the goal-laden first half, Algeria international Andy Delort drew level while his countryman Ilan Kebbal sealed the win for the Red and Whites with eight minutes left on the clock.

At the Stade Bollaert-Delelis, it was African stars who stole the show as Lens could only get a 2-2 draw with Saint-Etienne.

A minute into the game, Tunisia international Wahbi Khazri put the Green ahead with a fine individual finish.

Cameroon international Ignatius Ganago pulled the hosts back in the 36th minute thanks to an assist from Jonathan Clauss.

Keen on securing all points at stake, Gabon winger Denis Bouanga put the visiting team ahead.

However, Cote d’Ivoire international Seko Fofana ensured that the four-goal thriller ended on a no winner, no vanquished note with his 77th-minute effort.