Emiliano Insua has hailed his compatriot as the world's finest footballer and hopes his form with Stuttgart will lead to a new link-up with the Albiceleste in the future
Emiliano Insua says the mere presence of Barcelona forward Lionel Messi makes rivals feel afraid and insecure on the pitch.

The Stuttgart defender knows all about Messi, having played with the 28-year-old for Argentina and against his compatriot in La Liga during spells with Atletico Madrid and Rayo Vallecano.

The four-time Ballon d'Or winner is injured at the moment and has been left out of Argentina's World Cup qualifiers at home to Brazil and away to Colombia next month.

"It's a shame he is not going to be involved because he is the best player in the world today and he has been for many years," Insua told Goal in an exclusive interview.

"To have him playing for Argentina is a privilege for all of us Argentines. When he is on the pitch you notice such a difference. His mere presence makes rivals afraid and insecure. The game against Brazil (on November 13) will be so important and it would have been marvellous to have him available for that one." 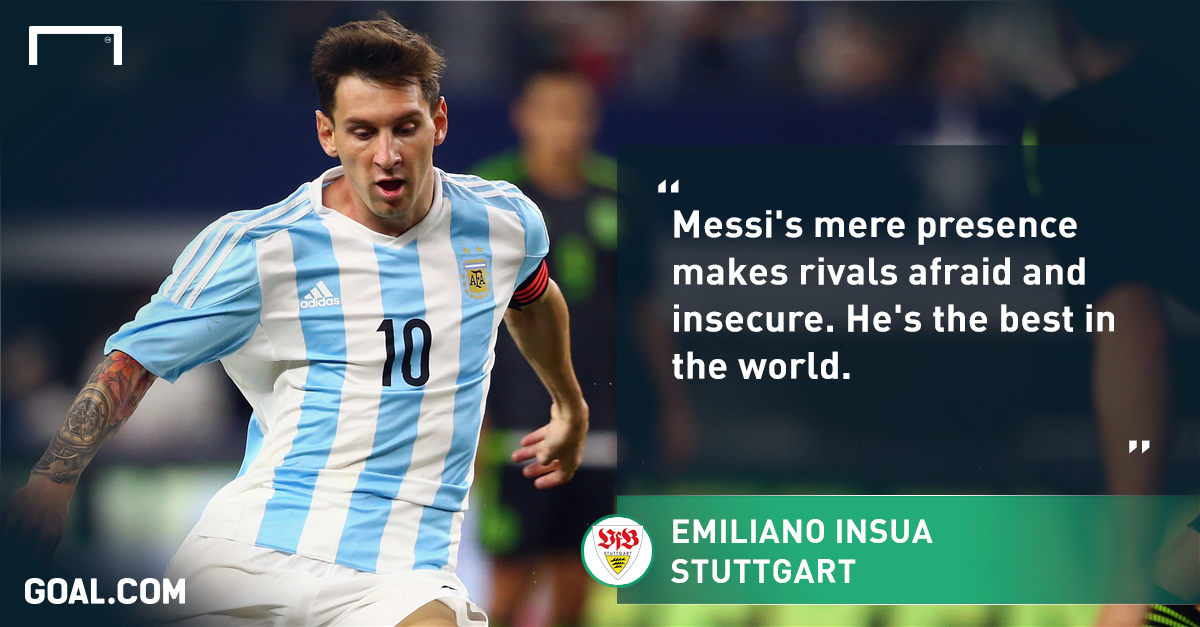 Insua, 26, made his last appearance for Argentina in October 2011, but he is hoping his form in Germany will lead to a recall for the Albiceleste and a new link-up with Messi.

"Messi is the best player I have played against - and he will continue to be," the left-back said. "Let's hope we can be together again on the same pitch because that would mean good news!

"I would give everything [to play for Argentina again]. Anything. It's so special for us to play for our country. I know I need to do it first for my club and show what I can do. Let's hope that opportunity arrives.

"If 'Tata' Martino was here, I would tell him to come and watch a Stuttgart game. And if he came to watch, I could tell him what great shape I am in!"
Close