The Ghanaian midfield dynamo is no more the man he was as his career has been curtailed by a series of serious injuries. Goal assesses the facts of his sorry predicament
FEATURE
By Thierry Nyann

Once viewed as the epitome of a proper box-to-box midfielder, Michael Essien’s career has been plagued with injury and he now finds himself on the fringes at Chelsea.

A decisive factor in the Blues’ Premier League successes of Jose Mourinho’s first tenure with the west London side, the Ghanaian has been excluded from the Chelsea squad for this season’s Champions League group stages.

The ‘Bison’ at his best is unparalleled; the African battler can seemingly provide a goal threat and play the enforcer's role simultaneously. When fully fit, he is one of the most feared and respected midfielders in England.

His energy, commitment and relentless work-rate saw him take a supremely talented Chelsea side by the scruff of the neck and drag them kicking and screaming to glory. A driving force he was, but injury setbacks have robbed him of his previous physical attributes.

Injuries to the cruciate ligament(s) have ended the careers of many footballers, and the former Lyon man has had the bad luck of suffering knee injuries on two separate occasions. The player that turns up at Cobham daily is not as mobile, fearless and agile as the one that terrorised opponents in the mid-2000’s. 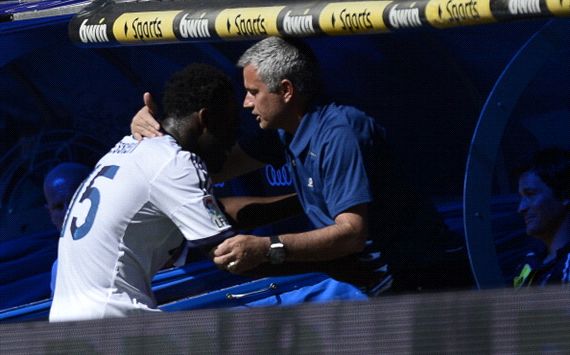 With Mourinho’s return to Stamford Bridge this summer, Essien must have rubbed his hands together with glee and hoped that things were going to look up for him. The Portuguese trainer knows only too well what Kwaku – the name given to him on the day he was born - is capable of when on form and brought him to Real Madrid on a loan spell last term. The Portuguese reunion with his old love might have given Essien thoughts of coming back to his own, arm-in-arm with his 'daddy', to spark a romance that would never truly be forgotten.

It was ‘The Special One’ who started playing Essien at full-back occasionally in Spain last season and it is clear that the African is a favoured player of the ex-Inter trainer. However, despite the allegiance shared by the pair, the Ghanaian has ahead of him this season little besides the prospect of watching from the sidelines.

Despite the wealth of talent it contains, the current Chelsea side is shorn of a world-class defensive midfielder. As such, Essien certainly has a look-in. The first-choice midfield pairing consists of Frank Lampard and Ramires, both naturally attacking players, while holding man John Obi Mikel is seemingly out of favour. On occasion, Rafa Benítez used David Luiz in midfield last term as one who could go toe-to-toe with rivals' strongmen.

With the transfer window now closed and no more players in Essien’s preferred position to contest with, the Ghanaian would certainly be an asset in a tight away game in which the 2012 European champions seek nothing more than seeing out a victory. In spite of the frequency with which those types of clashes can be expected in continental action, Essien’s abilities were overlooked during the compilation of Chelsea's current Champions League squad.

The best that the Ghana international can hope for now is to impress suitably in training so he might be considered for Premier League matches as well as in the domestic cup competitions. Thus far, he has been an unused substitute for three of Chelsea’s four games this term.

The 30-year-old should focus his energies on trying to gain a berth in midfield rather than at full-back, as his team appears already well-stocked in those departments.

A fully fit, pre-injury Essien would have been one of the first names on Mourinho’s team sheet for any Champions League date. With the midfielder’s abilities shackled due to an injury-prone period in his career, however, opportunities to show what he can do will most likely be severely limited this term at the Bridge.

account, so for all the latest news and features on Ghana football follow us by clicking on the above links
Close