The former Juventus and Real Madrid playmaker has been inducted into the Goal Hall of Fame and some of football's greats have discussed what makes him such an icon
"He'd go past one, two, three, five, six players - it was sublime. His feet spoke with the ball."
JEAN VARRAUD, WHO DISCOVERED ZIDANE


"Zidane is the master."
PELE

"He is from another planet. When Zidane stepped onto the pitch, the 10 other guys got suddenly better. It is that simple."
ZLATAN IBRAHIMOVIC
"The greatest player of the last 20 years? It has to be Zidane. He had everything. You never needed to tell him anything as he did it all by himself and knew what was expected."
MARCELLO LIPPI"I would give up five players to have Zidane in my squad."
FORMER ITALY COACH CESARE MALDINI
"Technically, I think he is king of what's fundamental in the game - control and passing. I don't think anyone can match him when it comes to controlling and receiving the ball."
MICHEL PLATINI

"You look at Zidane and think 'I've never seen a player quite like that'. Diego Maradona was a great player. Johan Cruyff was a great player. They were different - but with similarities. What sets Zidane apart is the way he manipulates a football, buying himself space that isn't there. Add his vision and it makes him very special."
KEVIN KEEGAN

"He thinks in one second and does it in the next. He is a special player, one who is original and exceptional. He creates space where there is none. Only the very best players can do that. No matter where he gets the ball or how it comes to him, Zidane can get out of trouble. His imagination and his technique are amazing."EDGAR DAVIDS

"He dominates the ball. He is a walking spectacle and he plays as if he has silk gloves on each foot. He makes it worthwhile going to the stadium - he's one of the best players I have ever seen."
ALFREDO DI STEFANO

"I have always admired Zidane. In fact, I have one of his shirts in my closet. We exchanged shirts after a Juventus-Perugia game."
MARCO MATERAZZI 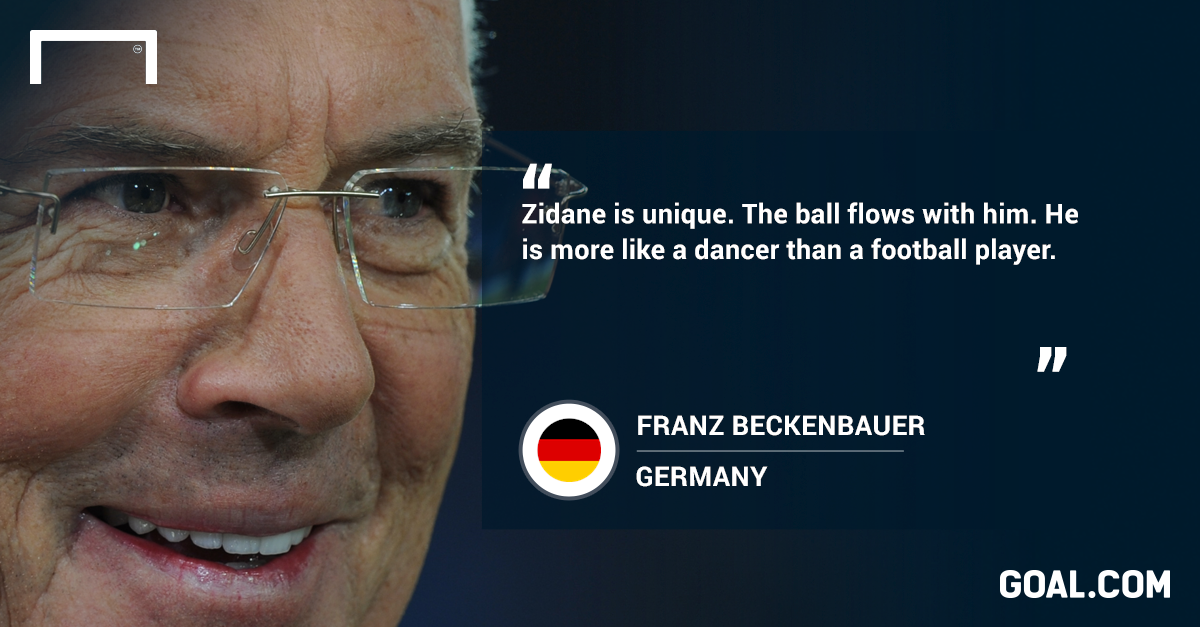 "You are a virtuoso, a genius of world football. You are also a man of heart, of commitment, of conviction - and that's why France admires and loves you."
FORMER FRENCH PRESIDENT, JACQUES CHIRAC
"Nobody knows if Zidane is an angel or a demon. He smiles like Saint Teresa and grimaces like a serial killer."
FRENCH SINGER-SONGWRITER JEAN-LOUIS MURAT"Zidane cost €73 million and that was cheap."
FLORENTINO PEREZ

"Zidane's goal in the club's ninth Champions League win was the goal of a genius, an artist, but I still replay some of his moves in my head. He represents the elegance of a simple hero for Real Madrid."
FLORENTINO PEREZ