Why do footballers kneel before a match? What 'taking the knee' means in sport 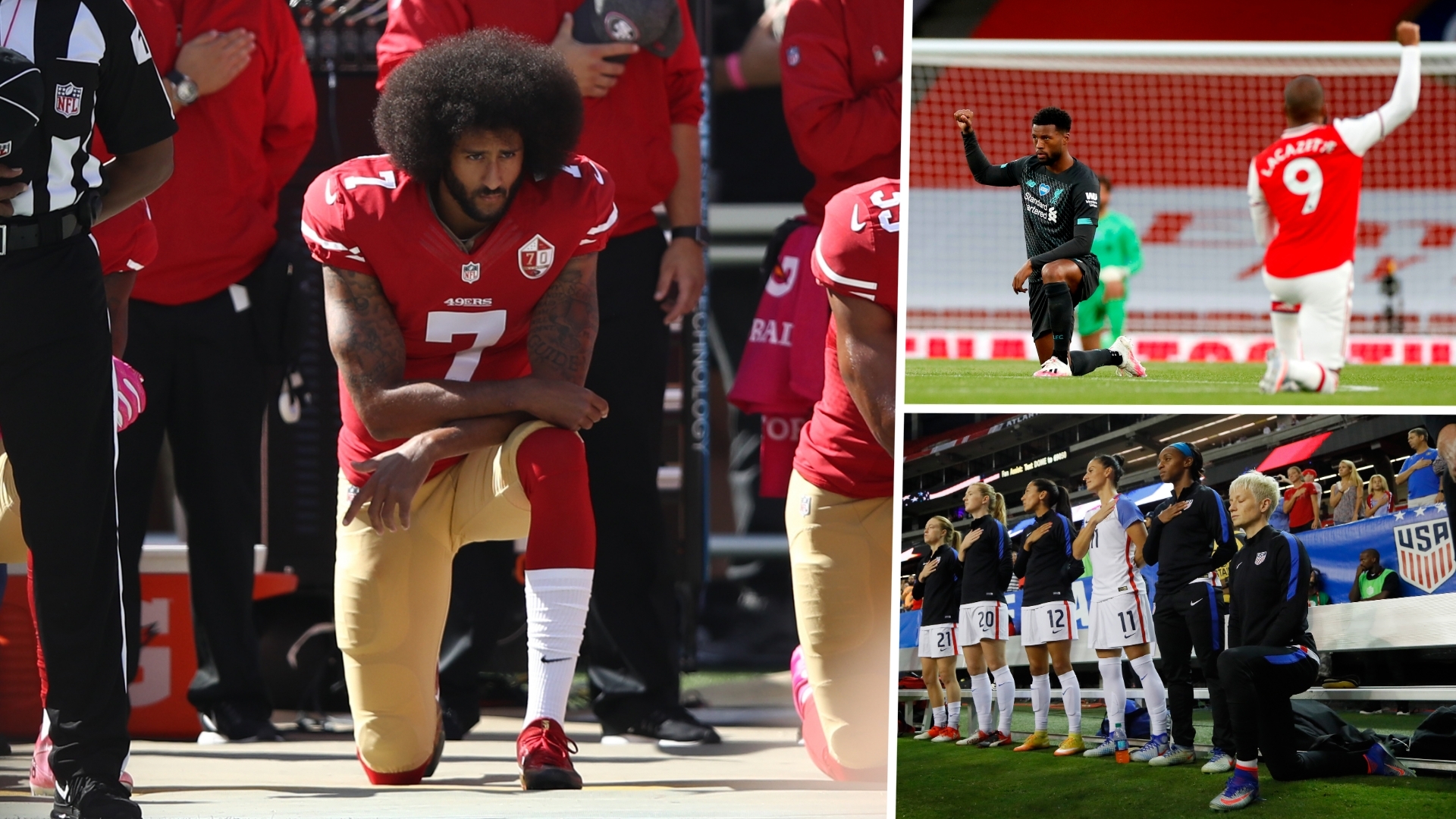 The death of George Floyd, a black man who was killed at the hands of a police officer in Minnesota in May 2020, sparked worldwide outrage and weeks of protests.

Video footage emerged of officer Derek Chauvin kneeling on Floyd's neck for nine minutes, despite Floyd audibly saying that he could not breathe.

Chauvin was not immediately charged with second-degree murder, and protestors took to the streets in the ensuing days to voice their anger against police brutality and anti-black violence in America.

Protests against racism and police brutality have since made their way into the sports world, with several athletes showing their solidarity with the Black Lives Matter movement and justice for Floyd by taking a knee before a match.

What does 'taking a knee' mean?

Historically, kneeling has been a way to show silent solidarity in support of human rights amid political turmoil – when athletes are not expected to drift away from their role and 'stick to sports'.

The action of kneeling can be dated back to the civil rights movement in the United States, where the likes of figures such as Martin Luther King Jr - along with other activists - kneeled after leading a prayer after a group of protesters were arrested during a march to the Dallas County Alabama courthouse on on February 1, 1965.

Many are "more dedicated to order than to justice," offended by kneeling during the Anthem & not by racism & modern-day lynching. #TakeAKnee pic.twitter.com/E23oM1ZW6X

Where did 'taking a knee' start?

The first high-profile instance of an athlete protesting silently, however, happened in August 2016 when former San Francisco 49ers quarterback Colin Kaepernick sat down instead of standing up as the National Anthem was played before a game in order to silently protest against racism and police brutality across the United States.

Said Kaepernick after the game:  "I am not going to stand up to show pride in a flag for a country that oppresses black people and people of colour. To me, this is bigger than football and it would be selfish on my part to look the other way. There are bodies in the street and people getting paid leave and getting away with murder."

Kaepernick then took a knee during the 49ers' fourth and final preseason game as a means to pay respect to the U.S. veterans and the military while still voicing his stance against racial inequality.

His peaceful protest invited other athletes within the sport to also take a knee in solidarity.

The ripple effect of Kaepernicks' peaceful protest, however, drew criticism from NFL bosses and especially U.S. President Donald Trump, who lambasted Kaepernick for 'disrespecting' the American flag and war veterans.

“Wouldn’t you love to see one of these NFL owners, when somebody disrespects our flag, to say, ‘Get that son of a b**** off the field right now, out,'” Trump said at a previous political rally.

At the time, NFL commissioner Roger Goodell did not align himself with Kaepernick's actions. The quarterback was released by his team in 2016 and has been a free agent since, and has filed a grievance against the league, accusing them of collusion to purposely shut him out of playing.

"The protests around the country are emblematic of the centuries of silence, inequality and oppression of black players, coaches, fans and staff. We are listening."

How has taking a knee impacted football?

U.S women's national team star Megan Rapinoe was the first soccer player to silently protest against racial inequality and follow in the footsteps of Kaepernick.

The midfielder took a knee during the national anthem before a NWSL match between the Chicago Red Stars and Seattle Reign in September 2016.

"Being a gay American, I know what it means to look at the flag and not have it protect all of your liberties," Rapinoe said at the time .

"It was something small that I could do and something that I plan to keep doing in the future and hopefully spark some meaningful conversation around it."

Rapinoe once again kneeled while the U.S. national anthem with the national team before U.S. Soccer passed a since-revoked policy that would require players to stand. At the 2019 Women's World Cup in France and refused to sing, which prompted criticism from Trump.

Asked he thought Rapinoe's actions were appropriate, Trump told The Hill: "No. I don't think so."

Floyd's death in May 2020 incited strong support and solidarity from athletes and sports figures worldwide, with players across the Premier League, Bundesliga, MLS and more peacefully protesting by taking a knee.

In the Premier League, players' names replaced were replaced by 'Black Lives Matter' for the first 12 matches of the restarted season, with several players showing solidarity by kneeling before the first whistle.

Liverpool defender Trent Alexander-Arnold went on to speak out against racism, vocalising his want for "meaningful change" to fight racism as he declared that "the system is broken" on Twitter.

"It can no longer just be our feet where we express ourselves. We have to use our profile, the platforms we have and the spotlight that shines on us to say, it's time for meaningful change," he wrote.

"The system is broken, it's stacked against sections of our society and we all have a responsibility to fix it.

"Black people are viewed differently. We face discrimination in actions but also in thought. It's more than just violence and abuse. Opportunity in life is restricted if you look a certain way. How can that be in 2020?"