Who is Marcus Thuram? Lilian's son who is top of the Bundesliga with Borussia Monchengladbach 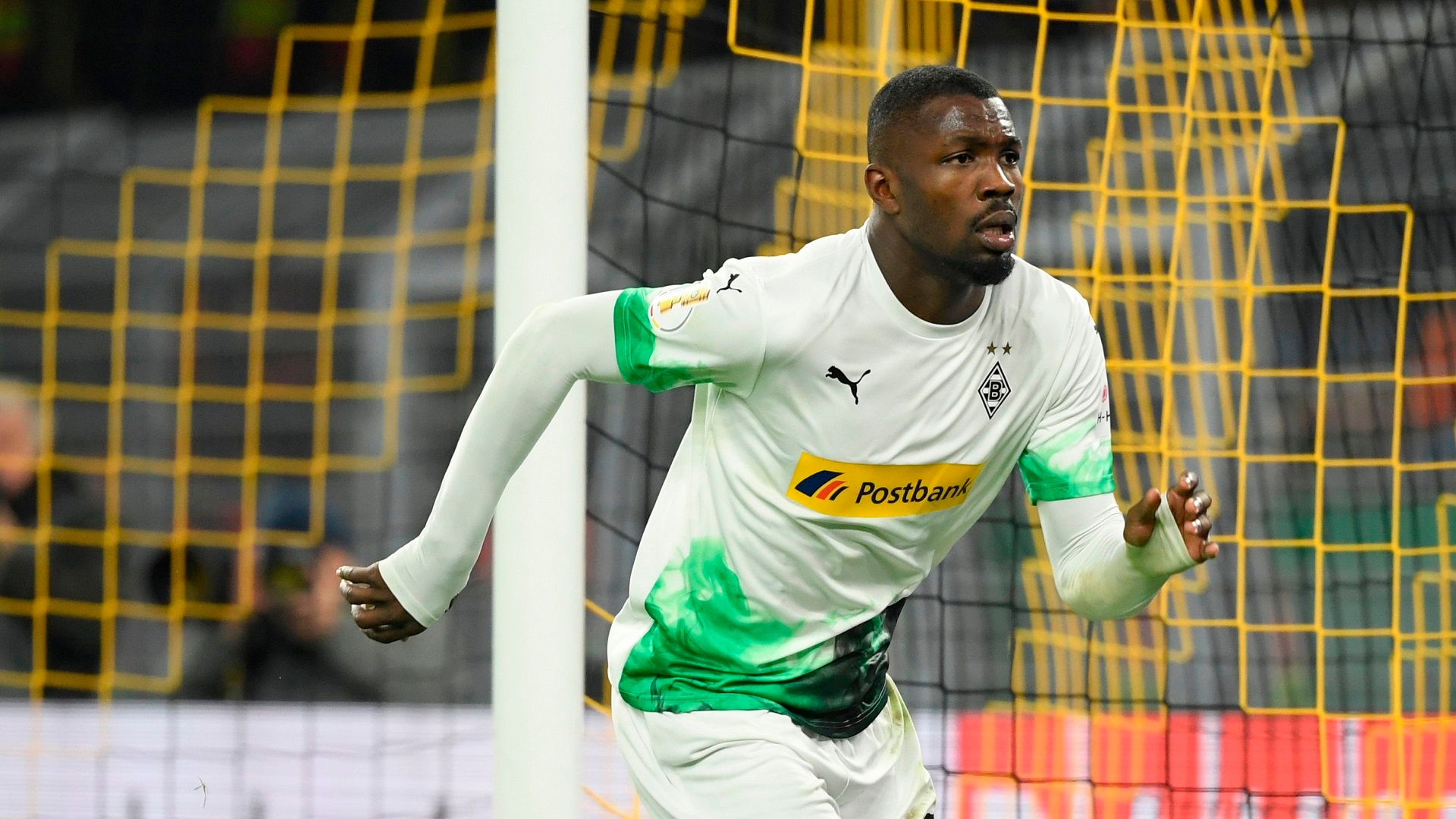 Gladbach have made a strong start to the German league season, with the son of a very famous defender leading the charge up front

Everyone would recognise Cristiano Ronaldo's famous 'Siiii' pose or Robert Lewandowski's crossed arms or Paulo Dybala's mask. They are all associated with great goalscorers, as a celebration needs to be used multiple times to become iconic.

Thuram is a name synonymous with success in French football, with Lilian Thuram lifting the World Cup in 1998 and the European Championship two years later. However, his son Marcus is now making a name for himself, in part thanks to his own trademark celebration.

The 22-year-old moved to Borussia Monchengladbach from Guingamp in the summer for €12 million (£11m/$13.5m), having scored 17 goals in 72 appearances for the French side. Nine of those goals came in Ligue 1 last season, but Thuram had little to celebrate as Guingamp were relegated.

This season is a completely different story as Thuram's five goals and five assists in 11 games have propelled Gladbach to the top of the Bundesliga table and seen the forward win the Bundesliga Rookie of the Month award for both Septemer and October.

Gladbach's eight wins from 11 games have also given him plenty of opportunity to roll out his signature celebration - placing a jersey over the corner flag before carrying it around the field. This is usually his own shirt, thanks to five league goals, but after a 3-1 win over Werder Bremen, he took Patrick Herrmann's jersey to celebrate his team-mate's two-goal outing.

Thuram has fit in seamlessly with the Foals, partly thanks to his partnership up front with fellow French attacker Alassane Plea. It was this duo that combined for Gladbach's first Europa League win of the season, with Plea setting up Thuram for a 95th-minute header to record a 2-1 win at home to Roma. The three points helped move the German club into second position and closer to the knockout stages with two games remaining in their group.

After the game? That celebration again, as the whole team joined in to help carry the corner flag around BorussiaPark and enjoy the moment with the fans.

Playing up front as part of a two in a 4-3-1-2 formation or on either flank as Marco Rose alternates with 4-2-3-1, Thuram has been a key part of Gladbach's success. His goals have obviously been crucial, but he offers so much more in attack: making clever runs to move into space or bamboozle opposition defenders, pressing high up the pitch to force turnovers, win tackles and recover possession, and find team-mates with accurate deliveries and well-timed passes.

Thuram's breakout season has not gone unnoticed on the international stage either. The former European Under-19 Championship winner and recent France U21 international has found himself on the radar of senior manager Didier Deschamps.

"He is developing well, his club is at the top in Germany," Deschamps told reporters. "That's very interesting. He plays in various positions, often as the second centre forward. He's definitely one of the players we're following."

At Gladbach, his team-mates have certainly enjoyed his on-field performances as well as his celebrations and off-field antics, with Swiss midfielder and fellow French-speaker Denis Zakaria impressed by his impact: "He is a great guy, a little crazy maybe, but what he brings to the pitch is phenomenal."

Borussia Monchengladbach sporting director Max Eberl was the man who brought Thuram to the club and he is extremely happy with the acquisition, believing he has also helped the mood of the players.

"Marcus is a very open person, he laughs a lot and is always positive," Eberl told the WZ. "He really helps lift spirits in the dressing room."

Deschamps admitted that he has spoken to former team-mate Lilian about his son, but the younger Thuram has already moved out of his father's shadow and is making his own name for himself in Germany.

He has already raised the jerseys of Lars Stindl and Patrick Herrmann aloft and if he keeps progressing the way he is, perhaps in the near future he'll be celebrating with a blue Mbappe or Kante shirt aloft on a corner flag.