"I was an artist on the pitch," proclaimed Dimitar Berbatov early in a wide-ranging interview about his life in football as he showed contempt for what he feels were lazy opinions on his style of play.

While some loved him, others didn't seem to understand what he was all about as his merits and talents were widely debated during his time as one of the Premier League's elite strikers with Tottenham and Manchester United.

Even Sir Alex Ferguson had mixed opinions of Berbatov. He drove to the airport on summer deadline day in 2008 to convince the Bulgarian to turn down Manchester City and move to Old Trafford in a £30.75 million transfer. But he then dropped him from the squad for the 2011 Champions League final against Barcelona which, at the time, infuriated Berbatov.

However, Berbatov knew that his style of play brought him to the top level and his unique style featuring flicks and tricks wasn't something he wanted to ever stop.

"I was an artist on the pitch," Berbatov told Goal . "I didn't realise it in the beginning but it was really important for me to do something different. If you watch me, you won't fall asleep or switch the channel. It might be a small movement, detail, how I control the ball or flick the ball.

"I wanted people to say 'wow, I want to try that'. Then you see it isn't as easy as it looks. This is what I wanted to do. It didn't affect my game because this is who I am. I have my way of seeing football, not everyone can see it in the same way.

"Everyone is different. It helped me get to one of the biggest clubs in the world. Of course, you can't play with 11 artists on the pitch. It is not going to happen, you need...not 11 of me.

"You need aggression. That player is a bully with a tooth missing, grass and blood on their shirt. You ask someone like Vida (Nemanja Vidic), 'are you okay?' He goes 'I am f*cking great'. You appreciate what he is doing for you. He gets the ball, gives it to you. You can then do the magic."

Type 'Berbatov assist' into Google and only one moment will come up. Berbatov's nonchalant flick and pass to set up Ronaldo at Old Trafford against West Ham in 2008 seemed to be a moment only he could produce.

His style tended to be balanced out by another forward with a more tenacious attitude. Usually, it was someone who could hunt down the ball and played as a number 10. Wayne Rooney and Robbie Keane come to mind as great strike partners of his, but Berbatov says he struck up a better relationship on the pitch with a former Bayer Leverkusen star.

He said: "I had Wayne Rooney and Robbie Keane. Even if you don't speak a lot outside the pitch, you respect each other for what you do on the pitch. You see what each other can do and how you help each other get better. In turn, you help the team. Everyone wins.

"At Leverkusen, I had a great partnership with a guy called Franca. We scored so many goals. We destroyed Bayern Munich in a season. 4-1. We both got two goals each. He didn't speak English or German so outside the pitch we didn't say a word. Literally nothing. Honestly, nothing.

"I saw how he trained and played on the pitch and the other way around. When we stepped on the pitch, man, it was like we were sleeping together. I was enjoying playing with that guy. Unbelievable." 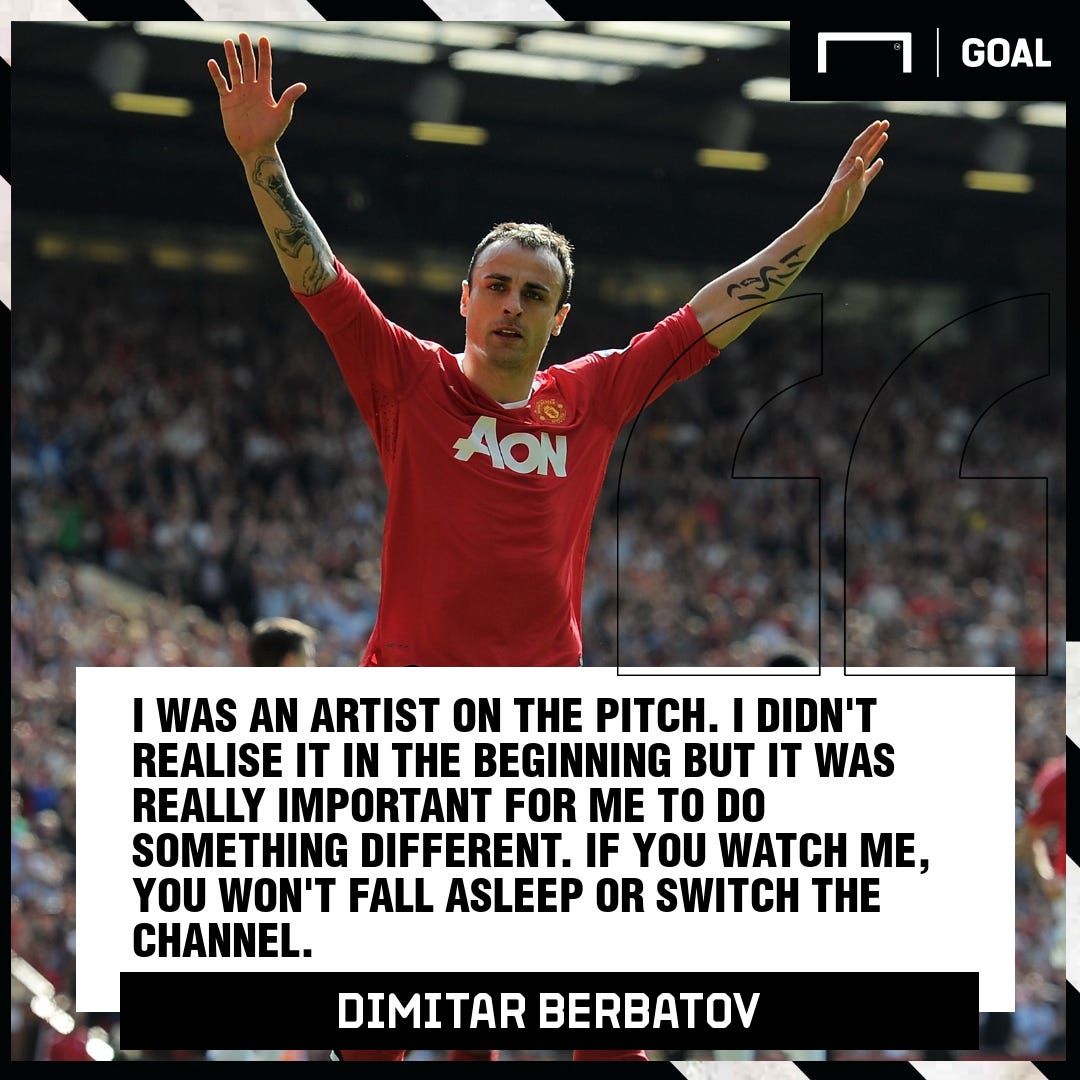 Regarded as one of the greatest ever Bulgarian footballers, he won five major titles during his time in English football. There is a lot of pride to be had in Berbatov’s achievements and he considers winning the Golden Boot during United’s Premier League title-winning season in 2010-11 as his crowning moment.

Yet the season he enjoyed the most was in 2002-03 when he helped to save Leverkusen from relegation from the Bundesliga, just a year after they had lost the Champions League final to Real Madrid.

As English football slowly moved on from the drinking culture which had a big role in players’ off-field activities, the likes of playing video games and golf became more embedded in a footballer’s way of life away from matches and training.

For the more introverted Berbatov, though, drawing and reading were his primary activities of choice, and something he still enjoys today.

"I always tried to grow out of that,” he said. “I was a very shy boy. I didn't speak to many people and I tried to keep my world private.

“I am still to this day the same in some areas of my life but now I am more open to conversations and socialising with people. I think it is something I should have done more often when I was playing."

This outsider image affected the way Berbatov was judged in England by pundits and Berbatov feels those watching him were often not able to analyse his contribution fairly.

"It is probably because I didn't play like Rooney or Tevez," Berbatov continued. "I didn't like that because I can show you six or seven current world-class players who run less than me back then. When you label something like that, it sticks. Even if it isn't true.

"People can go f*ck themselves. People don't understand and try to look smart. I would check my stats after every game and I was running 10-11km every game. It doesn't make any difference for me. I was more bothered how I move and make space.

"How to get an assist or pass to keep the ball. It wasn't all about goals. I know when I was bad or good. I was realistic and knew where I stood in the football world. I always wanted to develop."

Berbatov may be dropping swear words but he sits at ease as he adjusts to life after playing football. The Bulgarian legend has been productive while being a father to his two daughters in Sofia.

He is set to get his UEFA A Licence and he is beginning to consider a coaching career, while having business interests, including working as an Ambassador for Betfair. Berbatov has appeared in a film and he has written his autobiography which is currently only available in his native language.

"I had four scenes in the movie and I enjoyed it because it was something new," Berbatov continued about appearing in the film Revolution X. "I will probably not do it again, now I have done it, I know what it is.

"My ambitions are what I know and do which is football. Maybe in the future I will try being a manager or sports director. I have my degree in sports management and I am doing my coaching badges at the moment. I studied in Sofia and I am doing my badges there.

"I am going to get my A Licence and then I only need my Pro Licence and I am ready to go. You never know, I need to prepare. I try to write about training schedules and things like this. You need to stay true to yourself. Integrate your philosophy and know who you are.

"At the moment, I am studying. I have people around me who are doing the same. I have a plan in my head how I would do it and how I like to do it. You need to be in the right place at the right time, just look at Pep Guardiola and Zinedine Zidane at Barca and Real Madrid.

"I feel good in Sofia at the moment. My ambitions, if it is coaching, is to do it in the UK. People know me and respect me here. I like living here, too. London is one of the best cities in the world."

One of Berbatov's regrets is not hiring a PR firm to massage an image which was distorted as he retreated to the shadows after games. However, he remains resolute that he can both be true to himself while adapting to changes in coaching as he bids to return to English football.