The Catalan coach has suggested that Jose Mourinho favours a more direct brand of football, while insisting that he will never waver in his methods

Manchester United have been branded direct and in favour of a long-ball approach by Manchester City manager Pep Guardiola.

Jose Mourinho has forged a reputation down the years for making his sides difficult to beat, with the Portuguese having sought to blend graft with guile from Porto to United via Chelsea, Inter and Real Madrid.

His methods have not always been well received, but he has always delivered results.

Mourinho has United level with City in the 2017-18 Premier League title race, but Guardiola has suggested that is down to adopting a more English approach than that embraced by the likes of his City side and fellow contenders for the crown, Chelsea and Tottenham.

“I see Chelsea, I see Tottenham - they like to play [but] at Manchester United you have the second balls.”

When pressed on whether that comment was “a little dig” at City’s arch-rivals, Guardiola replied: “I have a lot of respect for my neighbours.”

Whatever his motives for questioning the approach of others, Guardiola insists that he will never waver in his own philosophy – with the man credited with forging the famous ‘tiki-taka’ brand of football at Barcelona prepared to keep prioritising both style and substance. 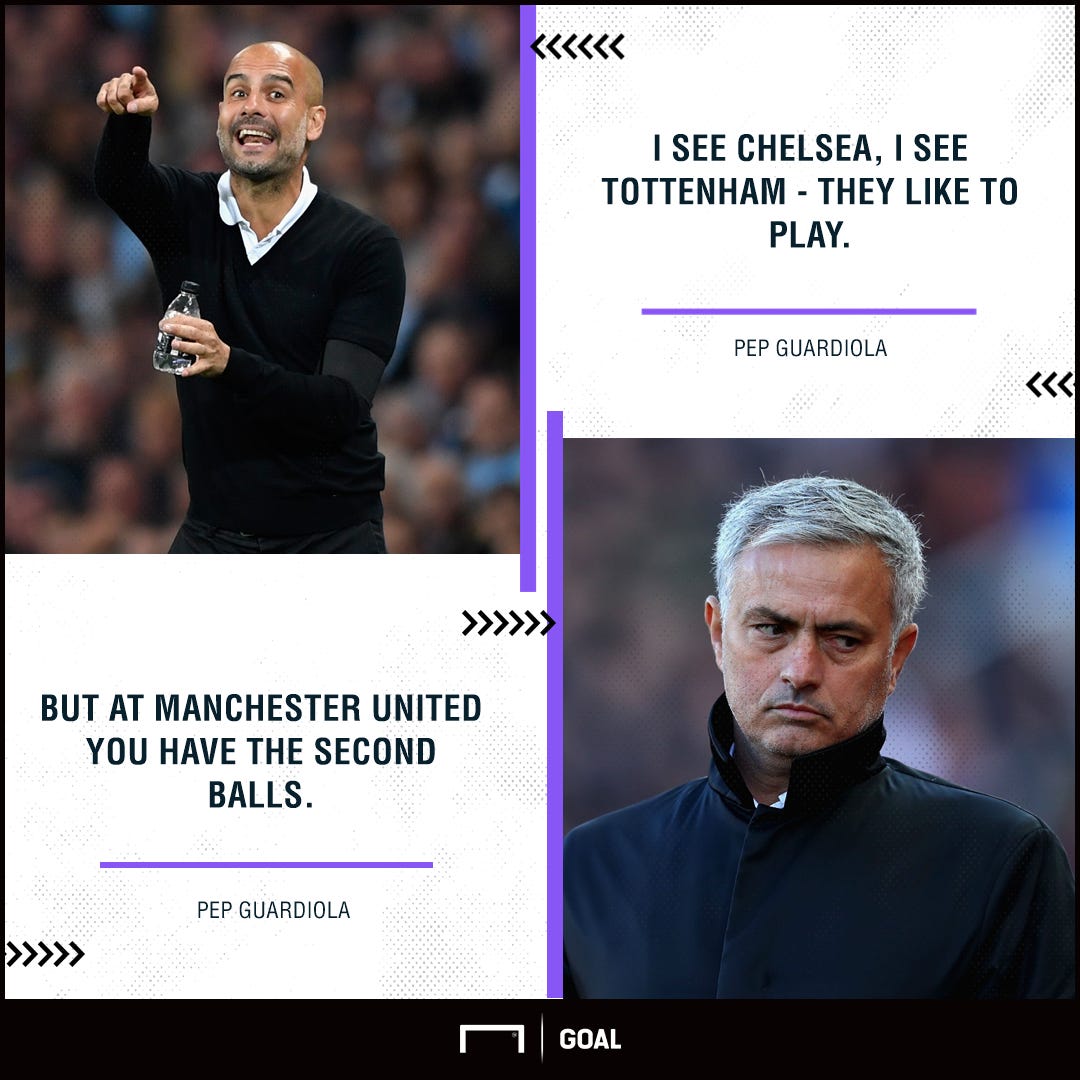 He added: “In Spain, the value of the ball is so important. In Germany, the counter attack is a strong weapon.

“Here the ball doesn't travel with the team that's why English football is nice and attacking.

“In Barcelona, I was not focused on the second ball. It's boring to coach it - all those long balls - I like to coach other things I like.

“It's difficult to change what is in your blood. At the end all managers do what they believe - I would like to be more patient but it’s difficult.

“Of course I have had to adapt [to English football] - but not the fundamentals. I adapt especially for the quality of the players I have.

“I assure you that I am going to try to be successful. When I finish my period here the people will judge me on titles - but the way I [work] I will not change.”

City have gone unbeaten through nine games in all competitions this season.

They have emerged victorious in eight of those matches, with Everton the only side to have frustrated them in a 1-1 draw at the Etihad Stadium back in August.

Guardiola has got his star-studded side firing on all cylinders, with a remarkable 24-goal haul collected from their last six outings.

Their final fixture before the next international break will see them take in a crunch clash with reigning champions Chelsea at Stamford Bridge on Saturday.