Barcelona have already been linked with that many Manchester City players this summer that fans have joked to expect a bid for club mascot, Moonchester, in the coming days.

City’s greatest ever goalscorer,  Sergio Aguero, and Spain international Eric Garcia have already made the switch from the Etihad Stadium to Camp Nou, and a number of of Pep Guardiola’s other players have been speculated to follow.

Bernardo Silva, Aymeric Laporte, Ilkay Gundogan, Raheem Sterling and Joao Cancelo have all been linked with transfers to Barca in the short time since the end of the season.

While all made at least 27 appearances for City as they won the Premier League and Carabao Cup before reaching the Champions League final, a small shake-up of the first-team squad is expected.

But that will only happen if Guardiola can find suitable replacements, which will not be easy this summer given the state of football's finances in the wake of the coronavirus pandemic.

City already need a replacement for Aguero with Tottenham’s Harry Kane leading their wanted list,  and any bid for the England captain will be partly funded by the sale of previous loan players and fringe members of the squad.

Other new arrivals, though, will be dependent on how many senior players leave through the exit door.

City will be charged top rate for potential targets, with Aston Villa hoping to get close to £100 million ($140m) for Jack Grealish, but finding cash-rich buyers for any departures will be tougher.

Barcelona, for example, continue to be linked with some of the world’s best players. Erling Haaland’s agent Mino Raiola and father Alf-Inge were spotted at Camp Nou over the spring, and there are other superstars rumoured to be on their radar too. 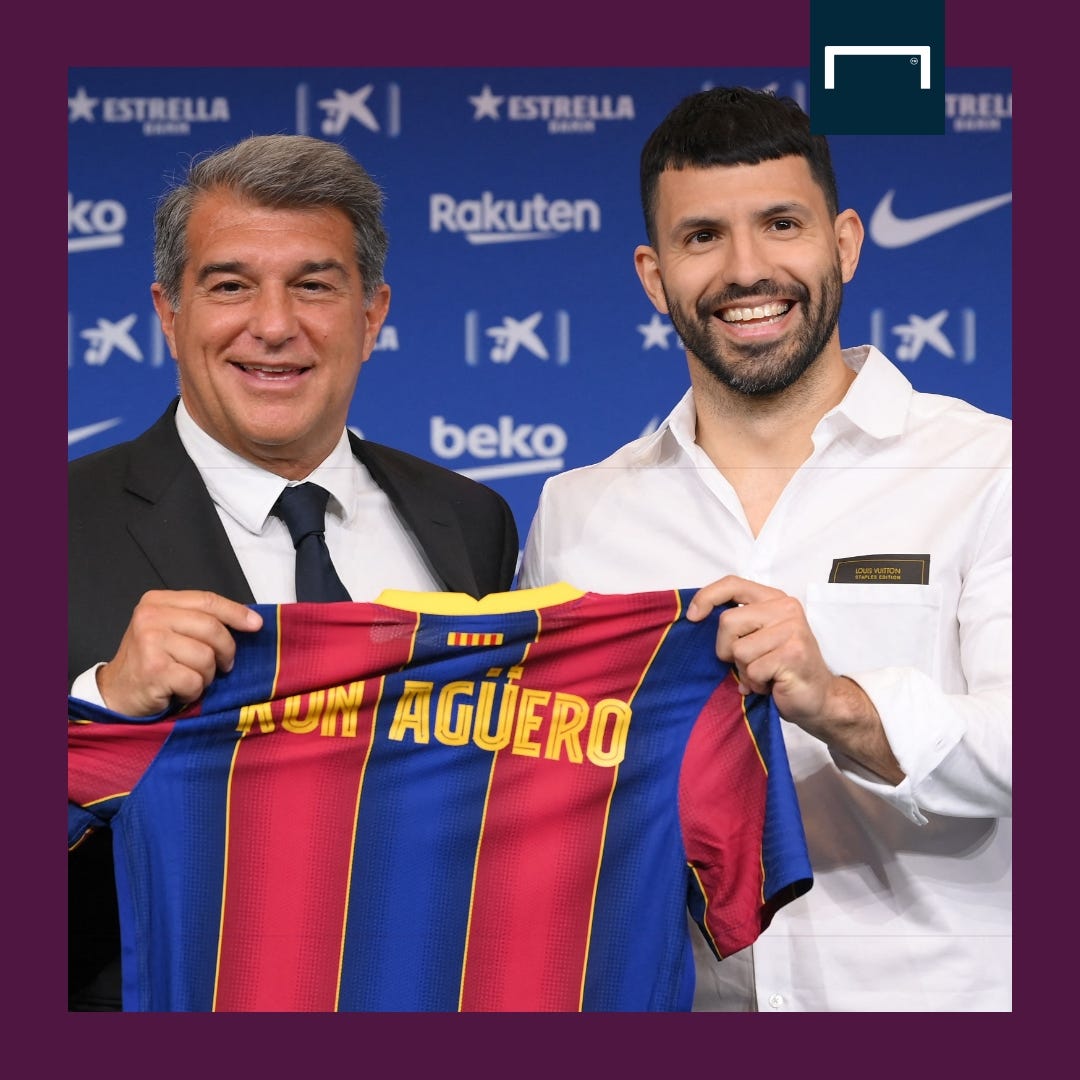 Most recently, a raid of City’s squad has been talked up in the media, but given  the extent of their financial problems, which were revealed in January when the club's annual financial report showed their debt had reached €1.2 billion (£1.1bn/$1.5bn), they have spent the summer so far collecting free agents.

Aguero was signed on a free transfer, as was Garcia after they failed to find funds to sign the 20-year-old for a knockdown price last summer or again in January..

Lyon forward Memphis Depay also arrived for nothing on Saturday,  though his Netherlands team-mate Gini Wijnaldum opted for Paris Saint-Germain  despite strong interest from the Blaugrana in the ex-Liverpool man.

Barca's biggest outlay of the summer in terms of a transfer fee came when  they spent just €9m (£8m/$11m) on Real Betis full-back Emerson Royal.

Making a move for any City players, however, will be less straightforward, with the Premier League champions wanting a realistic price for players that have already shown their quality.

Possible swap deals have been mooted, with Barca needing to streamline their squad and reduce their wage bill.

Sergi Roberto, Ousmane Dembele, Philippe Coutinho and Samuel Umtiti are among the Barca players that could potentially be used as make-weights, but Guardiola only wants players that will strengthen his side and not just manoeuvre his squad for the sake of it.

City, therefore, have no interest in such creative transfers even if relations between the two clubs have improved substantially since Joan Laporta was elected as the new president in March.

City CEO Ferran Soriano, director of football Txiki Begiristain and Guardiola all worked with Laporta during his first stint as Barca president between 2003-2010, and know him well. 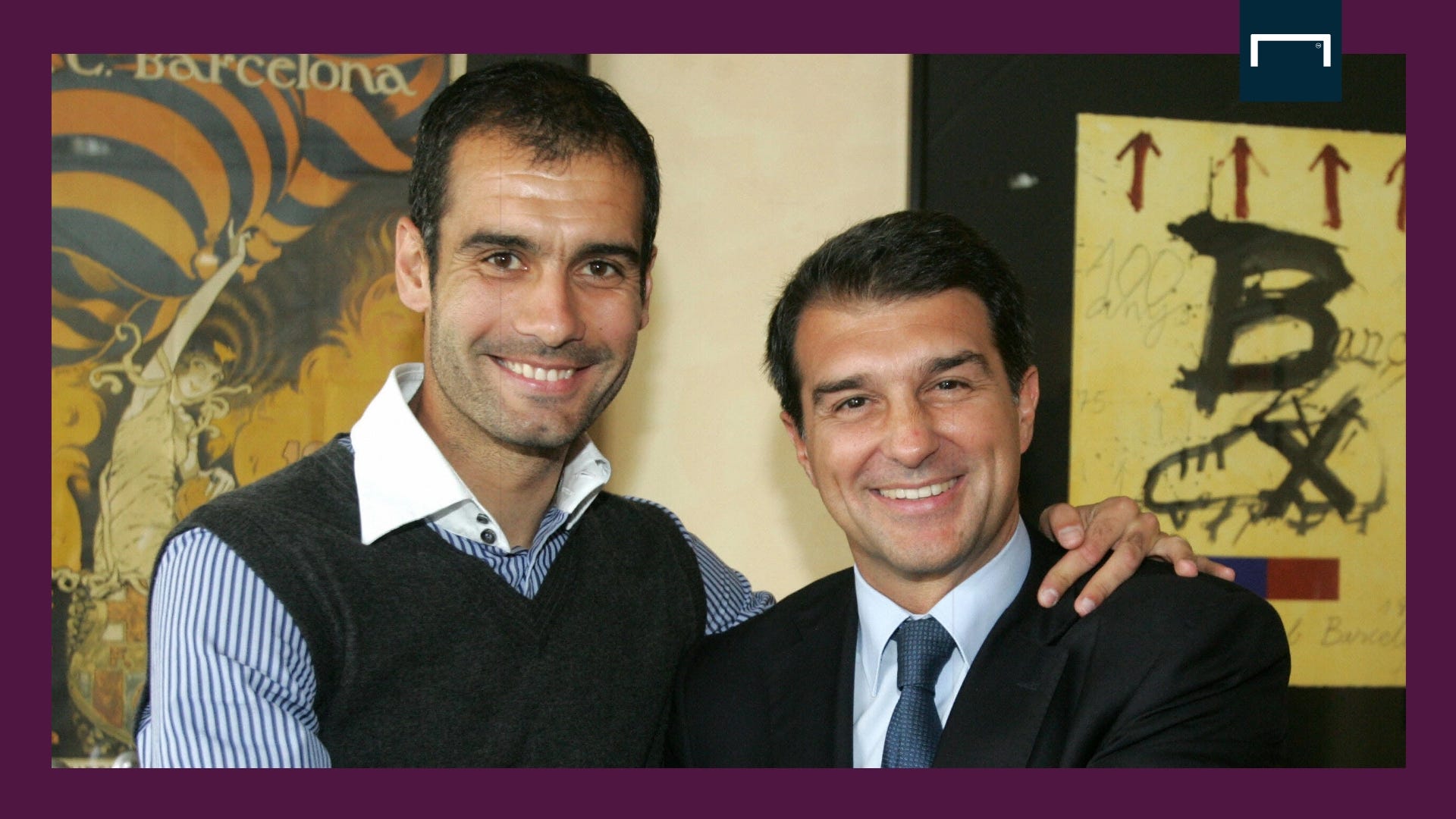 Guardiola last week played golf with both the 58-year-old and current Barca coach Ronald Koeman in Mallorca, which was in stark contrast to the  public fallout Guardiola had with Laporta’s predecessor, Josep Maria Bartomeu,  after he had welcomed UEFA sanctions for City breaking Financial Fair Play rules.

While that verdict was subsequently overturned on appeal by the Court of Arbitration for Sport, Guardiola fired a broadside at Bartomeu, warning: “Don't talk too loud, Barcelona, that's my advice, because everybody is involved in situations.”

Emotions have turned around to such an extent that Guardiola, who joined the Catalans' famed La Masia academy as a 13-year-old and went on to win every top trophy in Europe as a player and then again as a manager, described Barca as the “club of my heart” when he revealed Aguero would be heading there this summer.

Although Guardiola has previously permanently ruled out ever returning as a coach, which would be Laporta’s dream, it is welcome to see fractured connections being repaired.

City are expected to be announced to be the opponents in Barca’s annual Joan Gamper Trophy, the traditional season curtain-raiser at Camp Nou where the first-team squad is unveiled to supporters.

The fixture is likely to go ahead in late August, after the Premier League has started, with the fixture also used to raise money for charity.

But while the goodwill has improved, both clubs know that when it comes to the business of transfer dealings, attitudes are more serious.

The Premier League champions have shown in previous dealings, from Leroy Sane’s delayed move to Bayern Munich to walking way from overpriced demands for Napoli’s Kalidou Koulibaly last summer, that they will not roll over in the transfer market.

If Barca have an interest in any of City players, they will need to come up with a serious financial proposal. Restored friendships will only get them so far.