The Reds defender celebrated his 23rd birthday this week, and is now looking to secure European glory against Real Madrid in his home town

It has already been a special week for Ibrahima Konate, and he hasn’t even reached the best part yet.

On Wednesday, he celebrated his 23rd birthday, and on Saturday night he will walk out in his home city, hoping to land the biggest prize in European club football.

“If I tried, I couldn’t have dreamt anything better,” smiles the Liverpool defender. “The Champions League final. In Paris. My home. What a story!

“For sure, it is definitely going to be the best moment of my life.”

It is more than eight years since Konate left the French capital, pursuing a career that would take him to Sochaux, to RB Leipzig and, last year, to Liverpool.

He says now that his dream is “to be the best central defender in the world, and to win all the titles going,” but back then, as a wide-eyed 14-year-old, his ambitions were rather more modest.

“My dream then was just to become a professional footballer,” he says. “I didn’t have an idea in my head about being at a top club or whatever. It was just about being a pro. I couldn’t look beyond that.”

What a time for Ibrahima Konaté to score his first #UCL goal!
Liverpool make the perfect start. 👌 pic.twitter.com/N4PJQrLqIp

One of eight children born to Malian immigrants, he had grown up in Paris’ 11th arrondissement, one of Europe’s most densely populated areas. There, he would play football in the ‘cages’ and on the streets, sometimes with a ball made from scrunched up paper and sellotape.

“We didn’t have the money,” he says, matter-of-factly. “Like most young Parisiens, we couldn’t get to see football in proper stadiums, and we didn’t play on (proper) pitches, because we didn’t have those opportunities.

“But we found ways to play football whenever and wherever we could. We really didn’t need much to be happy, we were just happy playing in the streets.

“If it was a ball made out of foam or leather or plastic – it would keep us busy all day. We’d play in the street, those cages, me and my brothers. That’s why, I think, we have these talents and qualities.”

Konate started out as a striker. Ronaldo - the Brazilian version - was his first footballing hero. Later, at Paris FC, he would move back into midfield before, as a 17-year-old professional at Sochaux, settling into his role as a centre-back.

Liverpool paid £36million ($45m) to sign him from Leipzig last summer, and their investment looks a shrewd one. Konate has made 28 appearances in all competitions this season. He has already featured in two cup finals, started five out of six Champions League knockout matches, and has every chance of lining-up alongside Virgil van Dijk against Real Madrid in the Stade de France this weekend. 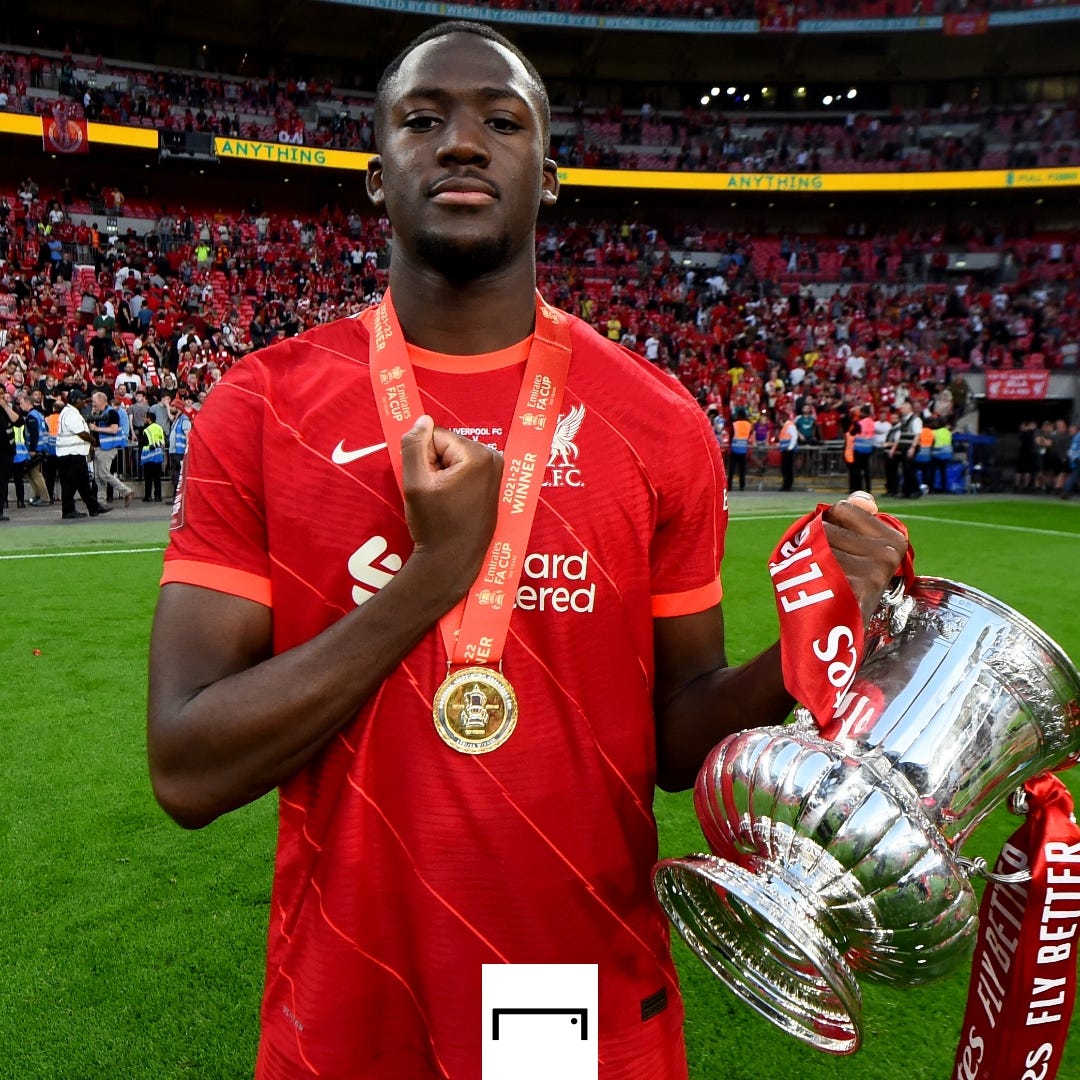 “I knew that with hard work I would perform well and get game-time,” he says. “But I wouldn’t have bet on playing in so many big matches.

“I never would have imagined this. I knew I was coming to a big club that wants to win titles, but this season has been exceptional. I think it’s been a historic season. I live it every day and it has been remarkable.”

As he talks, Konate’s eyes are drawn towards a picture on the wall. It is of Jurgen Klopp, and in his hand is the European Cup.

“I can’t stop looking at it!” Konate laughs. “I think that with this trophy, we’re talking about games I watched on TV as a kid and grew up watching.

“Even the final against Madrid (2018), when they lost, I watched on the tele. So it’s something that is already part of my history because I’ve seen it with my own eyes.

“It’s indescribable what it means – I’ve not got the words to explain what winning huge trophies like this one would mean. The club wants to show that they’re already part of football history, and they want to go on demonstrating that year after year.

“So when I think about the motto of being together [You’ll Never Walk Alone], and having this history together, it is beyond words, beyond dreams.” 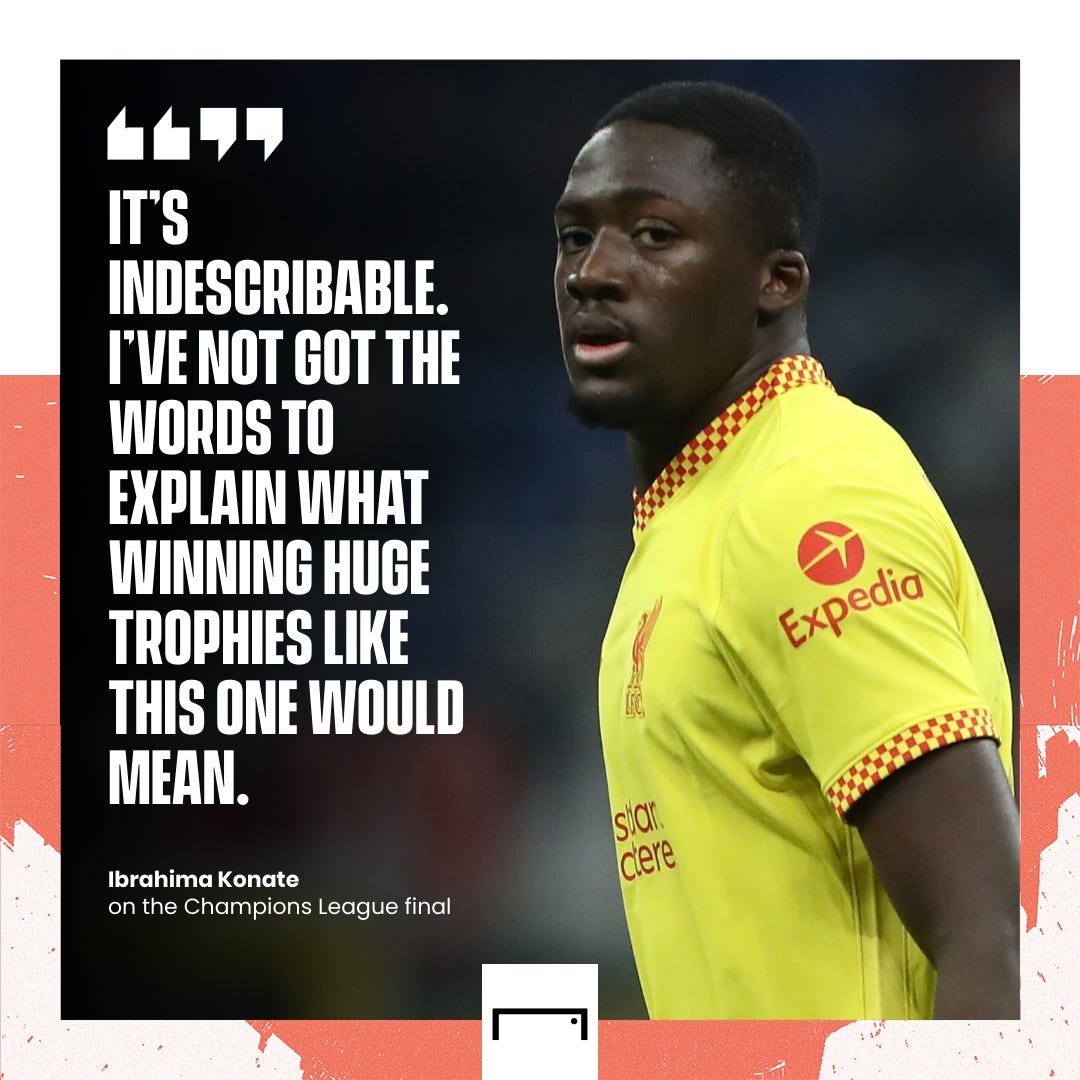 Konate still has friends and family in Paris, of course, and he will have plenty of support inside the stadium on Saturday.

He still returns to the 11th arrondissement from time to time, and sees himself as a role model for Paris’ next generation of budding young sports stars.

“There’s lots of talent there, everyone knows it’s a fish pond,” he says. “Today, I’ve been lucky enough to reach this level – but that’s not the end.

“I hope that I’ll reach even higher heights and be a source of inspiration for young people, an inspiration for more people to come from the streets of Paris into football.

“It would be good to think I can inspire more young players, and show it is possible.”

He finishes by telling a story. Seven years ago, he says, he watched Sochaux’s Under-19 team play in the final of the Coupe Gambardella, France's version of the FA Youth. Marcus Thuram scored as they beat a Lyon side which included Maxwel Cornet.

It is Konate's only previous visit to the Stade de France.

“It really has been some journey, yes!” he says. “A long, long journey!

“It’s incredible to think that I was watching a match at that level from the stands just a few years ago. It was my first time there, and now I’ll be on the grass, playing in a Champions League final there.

“I don’t have children yet, so I can’t be sure, but I think this will be the greatest moment of my life.”