West Ham midfielder Mark Noble clashed with a pitch invader as their 3-0 defeat to Burnley was interrupted several times by spectators.

Hammers fans had been voicing their anger towards the club's board as they sat just three points ahead of the relegation zone heading into the game.

Many supporters approached the directors' box to confront co-owners David Gold and David Sullivan, but Ashley Barnes' opening goal after 66 minutes sparked many into a rage as two soon invaded the pitch. 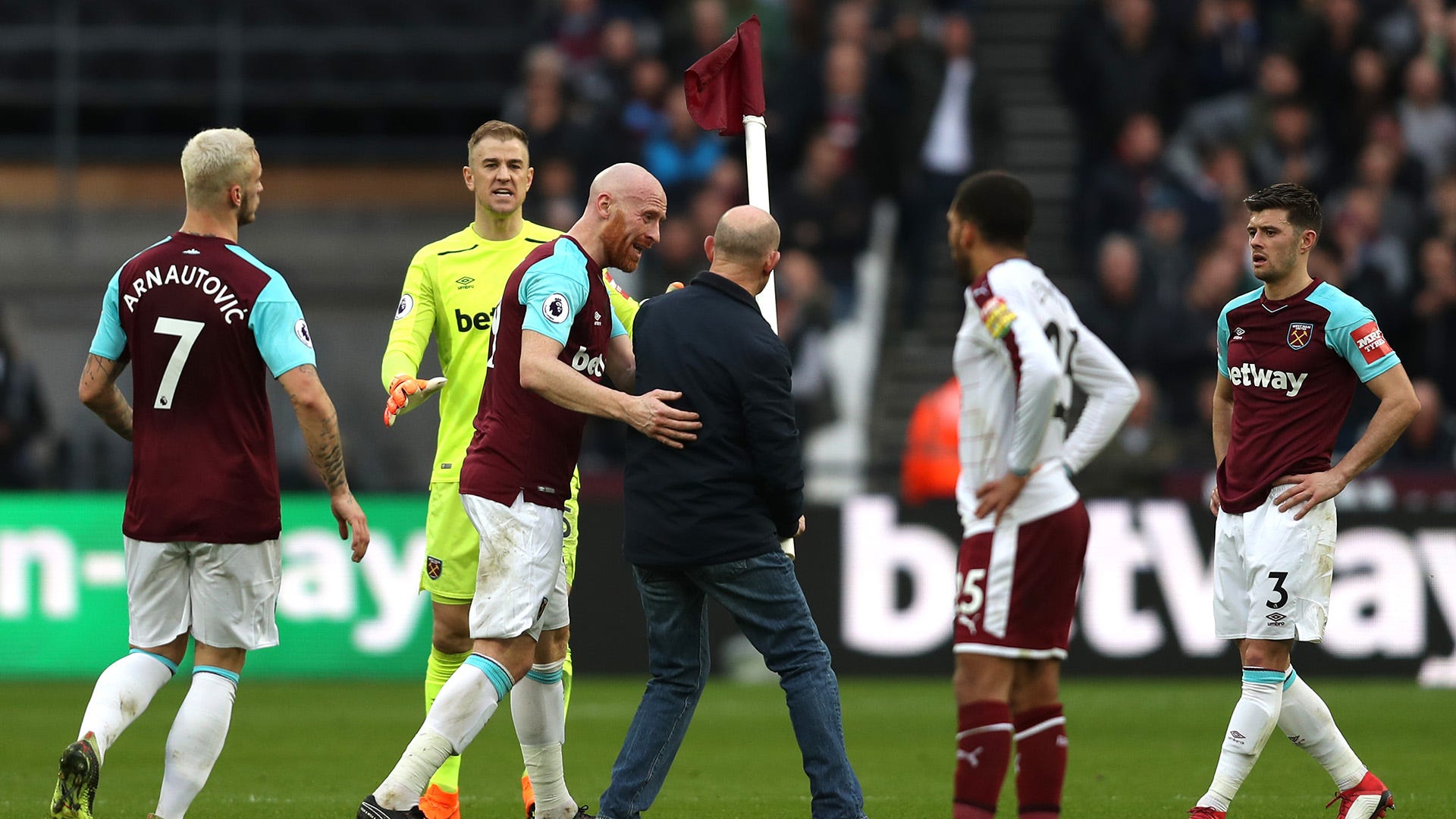 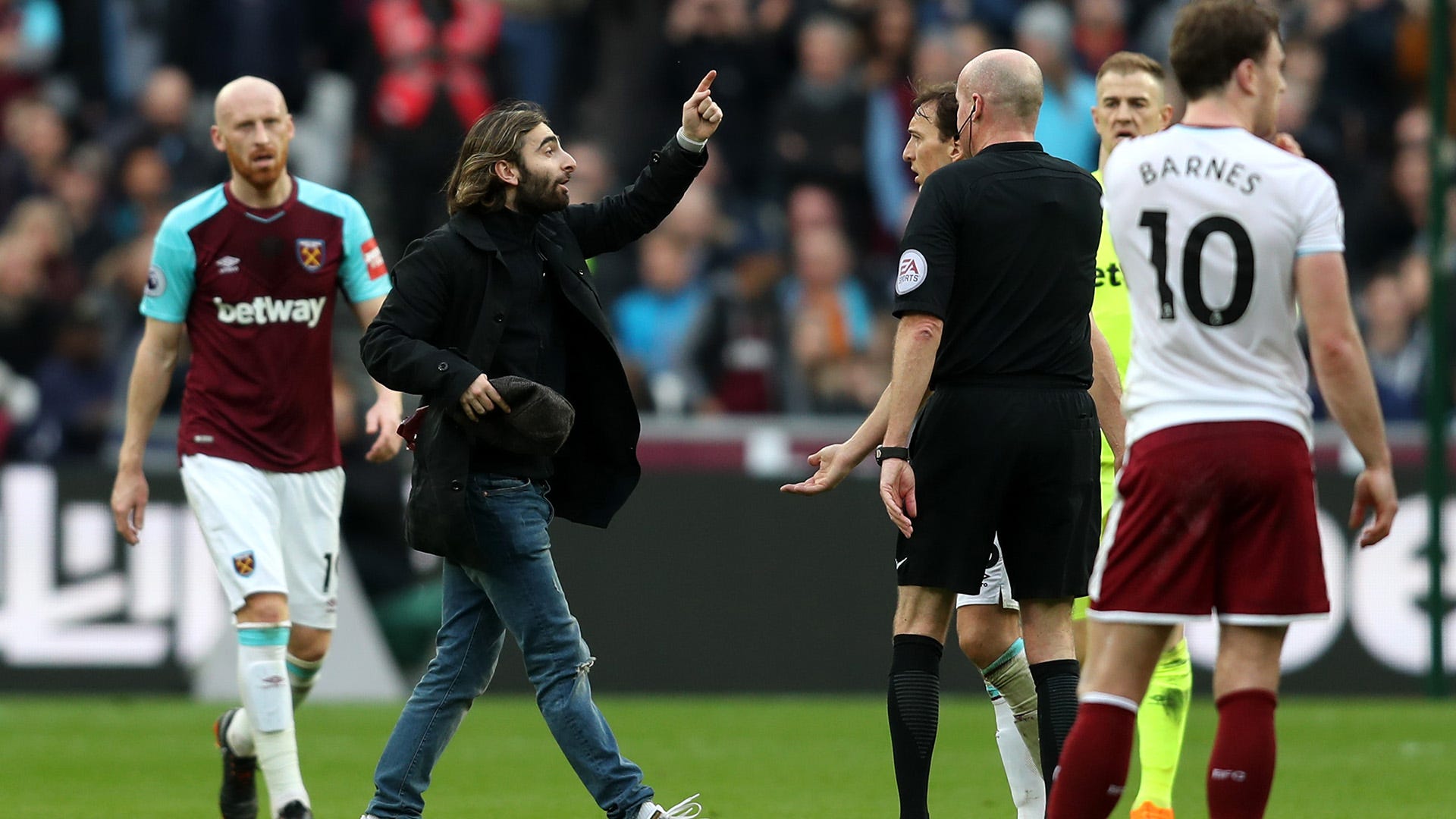 The game was halted as stewards and police dealt with the situation, while West Ham players also helped get the invaders off the field, with Noble spotted throwing one to the ground.

However, there was another interruption as another fan ran on a few minutes after Chris Wood doubled Burnley's lead and waved the corner flag around the centre circle until players intervened and took it off of him. 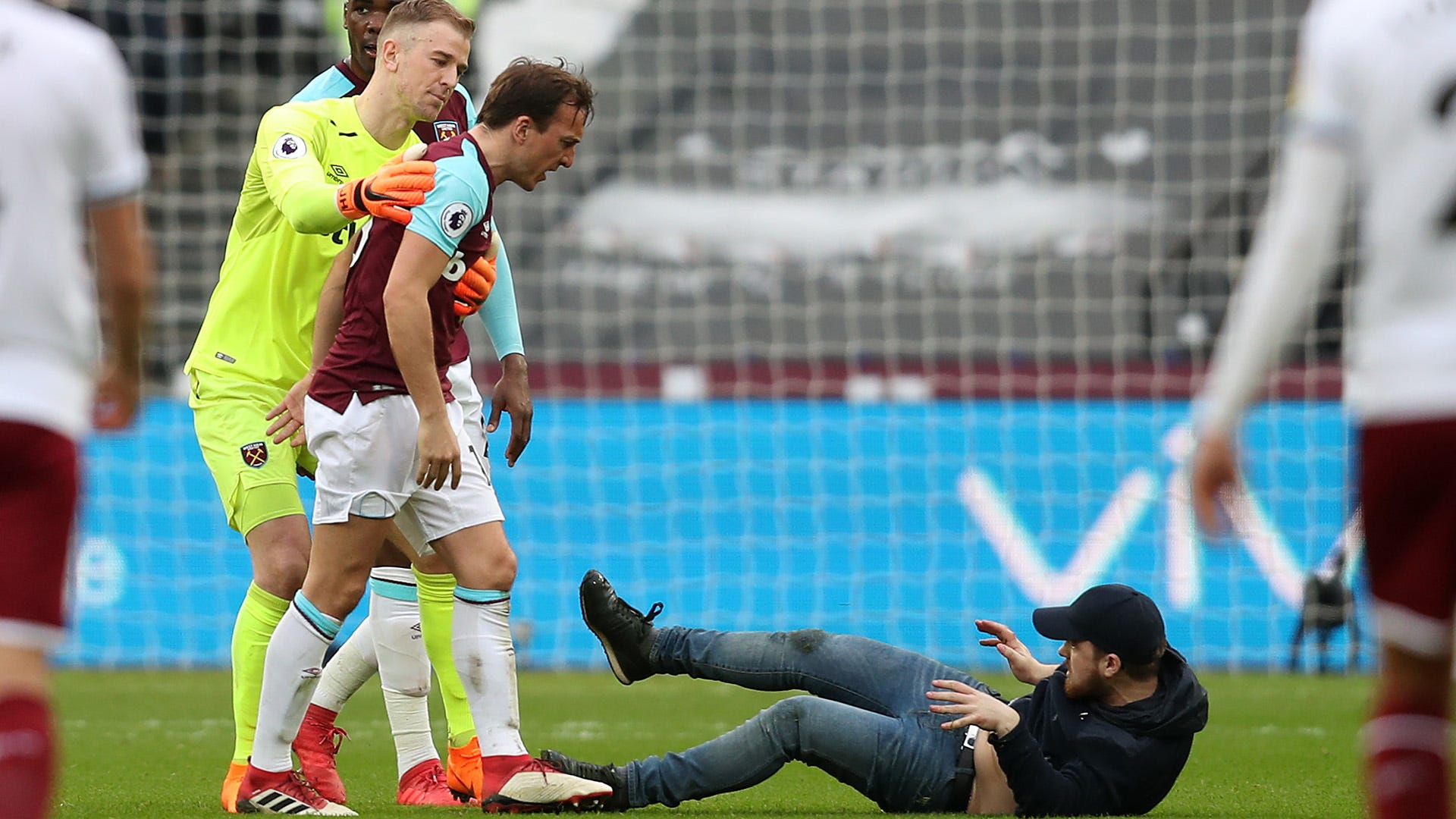 The afternoon got even worse for David Moyes' side when Wood netted a third for the visitors, latching onto the rebound after Joe Hart spilled a Johann Berg Gudmundsson shot.

Another supporter then ran on and tried to approach Hart, but got held back, while James Collins had to be restrained from confronting the offender.

As a crowd stood in front of the director's box, the co-owners had both left their seats by the 85th minute, and the situation was so tense that Burnley let young West Ham fans sit on the bench for the rest of the game.

Moyes told BBC Sport after the game that the fans had gone too far in coming onto the field.

"We want the supporters behind us and since I've been here they've been really good, the supporters," he said. "But you can't cross the line and come on the pitch. You know, the players had gone a goal down, we want them to keep their focus."

"What was going through my mind? Hopefully they wouldn't stop the game," Burnley striker Chris Wood told BBC Sport. "It's a tough situation, I can sympathise with the fans.

"They just want to see their team win. It's tough for them at the moment but they need to stick with the players.

"You don't want that to happen on the pitch, it creates problems and safety issues. We were fine, they were just voicing their frustration."

Premier League officials are likely to question how security at the stadium weren't able to stem the flow of furious fans, with so many pitch invasions in one match a rarity in modern, top-tier football.

"West Ham United have immediately launched a full and thorough investigation into the incidents which marred the second half of today's match and are committed to taking decisive and appropriate action," the club said in a statement on Saturday night.

"An emergency meeting has been called with all London Stadium stakeholders. There will be no further comment at this time."

West Ham United have now lost three league games in a row by a margin of three or more goals for the first time since March 2008.