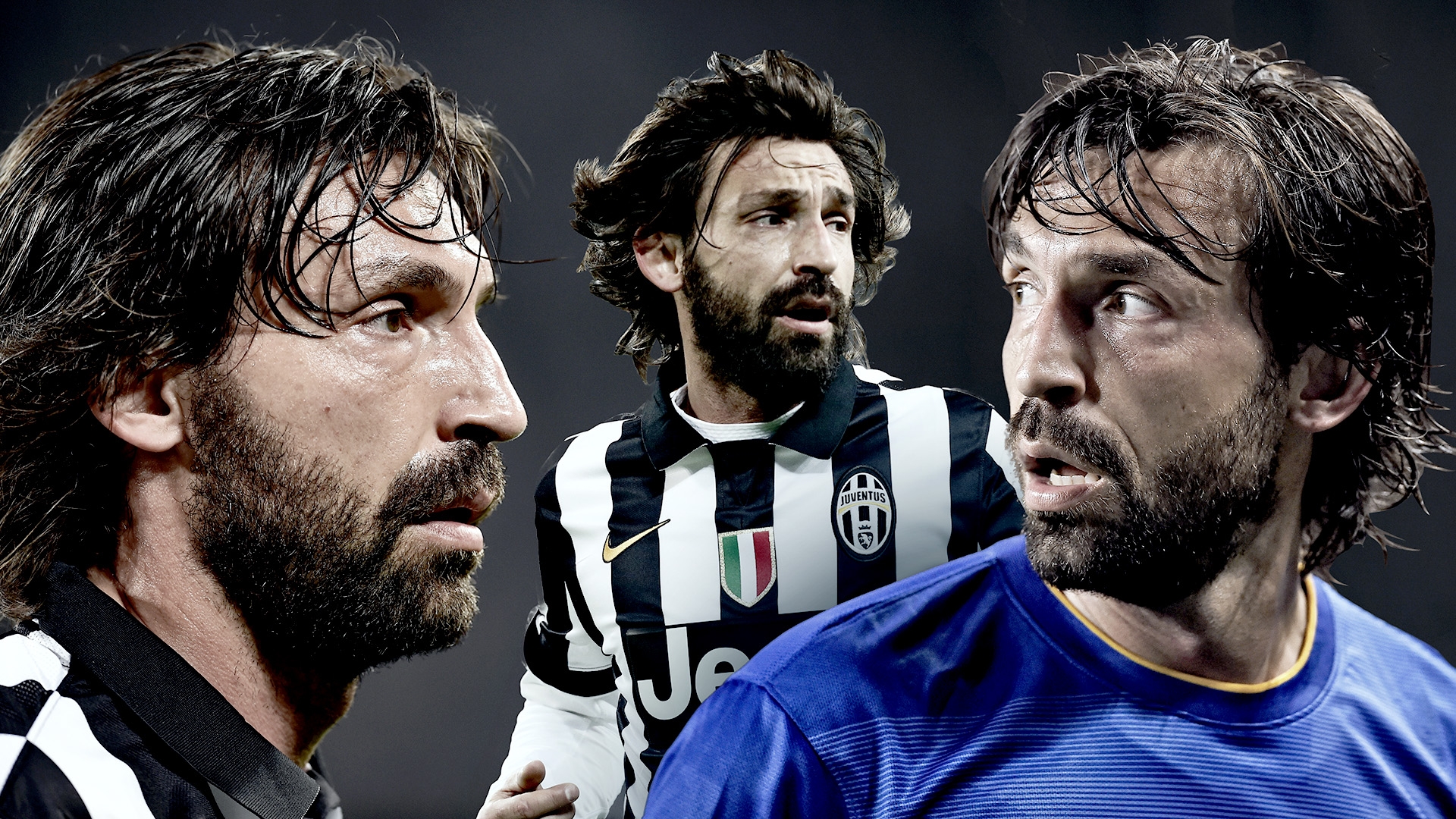 Italy have produced some magnificent midfielders over the years. Valentino and Sandro Mazzola, Gianni Rivera, Giancarlo Antognoni, Marco Tardelli, Rino Gattuso, Daniele De Rossi – the list goes on and on. But one player trumps all of these stars, the maestro that is Andrea Pirlo.

On Monday, in an emotional post on his Twitter page, Pirlo announced that he had retired from football.

Since making his Serie A debut for hometown club Brescia at the age of just 16, Pirlo has wowed audiences all over the world.

Football is so tribal, especially in Italy, that it is very rare to find a world-class player who transcends club colours and national boundaries. Along with the likes of Javier Zanetti, Paolo Maldini and Gianluigi Buffon, Pirlo is adored by almost everyone.

He is adored because he is so unique. Instantly recognisable - with or without his flowing locks and trademark beard - to watch L'architetto (The Architecht) effortlessly glide around the pitch, moving the ball and his team-mates like a chess-master and curling home stylish free-kicks is pure beauty.

For purists of the game, Pirlo is everything that a footballer should be. He is slow, he is weak, he doesn’t head, tackle or sprint, but such is his genius from a technical and mental viewpoint that he is still untouchable.

It is for this reason that Pirlo is particularly worshipped in Brazil – the country where joga bonito was born. Many Brazilians yearn for a return to the days of 1970 and 1982 where free spirits like Rivelino, Tostao, Socrates and Zico revelled in their Bohemian surroundings. Pirlo is the representation of the untainted, carefree, risk-taking football Brazilians wish they still played.

"Andrea Pirlo is the most Brazilian player of all Europeans. He's the first player on the paper if I had to make a dream team,” said former Brazil coach Dunga, ironically one of the first figures to signal the Selecao’s shift towards athleticism.

Indeed, we now live in the age of the athlete. Rule changes, medical advancements, synthetic footballs and the subsequent tactical evolution and increased speed of the game have pushed most artists of Pirlo’s ilk out of the sport. He is more suited to the 1980s when the game was slower, more technical and effective total pressing was still years away.

"He's the epitome of class; a man who leads the team using all the weapons that some consider antiquated yet, for me, are irreplaceable: deception, the pause, the fake, precision," said ex-Argentina and Real Madrid star Jorge Valdano. "These are all the exact opposite of that word that is so fashionable today and such a disaster for the game: 'intensity'."

This intensity could have robbed us of Pirlo’s genius, too. As the No.10 position began to become obsolete, Pirlo struggled to nail down a place at Inter. Fortunately, first Brescia’s Carlo Mazzone and then Carlo Ancelotti at AC Milan had the foresight to move Pirlo back from his natural habitat into a deep-lying playmaker role. From there, he could express himself, dictating the tempo and executing his pin-point through passes.

Perhaps no one since Michel Platini has been so accurate and effective when it comes to the lofted chipped ball over the top of the defence. Perhaps no one at all has been as calm and unflustered in possession as the 116-cap international. No matter the quality of the opposition nor the size of the game - there was no such thing as pressure to Pirlo.

“I don’t feel pressure … I don’t give a toss about it. I spent the afternoon of Sunday 9 July, 2006 in Berlin sleeping and playing the PlayStation. In the evening, I went out and won the World Cup,” he famously remarked.

As a regista, Pirlo was the brains and beating heart of one of the Champions League’s best ever club midfields. Together with Gattuso, Clarence Seedorf and Kaka, Milan reached three Champions League finals, a semi-final and quarter-final in five years in the mid-noughties, winning two titles and throwing another two away.

His good cop-bad cop partnership in the middle of the park with the snarling Gattuso was vital as Italy ended a 24-year wait to finally lift a fourth World Cup in the summer of 2006. In Germany, Pirlo topped the charts for assists and man-of-the-match awards. He scored their first goal of the tournament against Ghana with a rasping drive and assisted Marco Materazzi’s equaliser in the final win over France, also scoring in the victorious shootout.

And just like any great player, he proved his doubters wrong when many wrote him off after Milan ended their 10-year love affair by releasing him in 2011. In his 33rd year, he enjoyed perhaps the best individual season of his career. He was the catalyst for new club Juventus, who had been in the doldrums since the Calciopoli crisis, inspiring them to the Scudetto without losing a game before starring at Euro 2012 – where he was unplayable in the knockout victories over England and Germany.

He was named Serie A Player of the Year, retaining the honour in the next two seasons as the Bianconeri built a dynasty. Juve are currently on a six-year Serie A-winning stretch. The only true disappointment during his stint in Turin was his final game for the club in 2015 as Juve suffered a 3-1 Champions League final defeat to Barcelona in Berlin. He was reduced to tears on the Olympiastadion pitch as he narrowly missed out on a historic treble.

His two-and-a-half years at New York City FC have also been mixed at best, scoring just one goal, but by the time he arrived in the United States it was clear he was winding down his career.

Indeed, he has created more than enough history during a glittering career. He has won almost every major title for club and country - six Scudetti, two Champions Leagues, a World Cup and European Under-21 Championship among 19 team honours. Some insiders believe he would have won the Ballon d’Or in 2012 had Italy not lost that year’s final of the European Championship – the one elite trophy to elude him.

His career is full of unforgettable moments that will still be played on highlight reels 50 years from now. From his Panenka penalty against England at those Euros to his reverse assist to Fabio Grosso six years earlier during the most dramatic ending to a World Cup semi-final in Dortmund. Then there was his sublime chipped ball for Roberto Baggio to famously round Edwin van der Sar in 2001, his free kick versus Real Madrid in 2009 and another stunning set piece against Mexico on the occasion of his 100th Italy cap.

“Pirlo is a genius. Together with Baggio, I think he’s the greatest talent that Italian football has produced in the last 25 years,” gushed Gianluigi Buffon.

"History will remember him as one of the best ever for sure. He has achieved everything," Pirlo's former team-mate Samuele Dalla Bona told Goal when his planned retirement was announced last month.

What is certain is that there will never be another player as unique as Pirlo. For not only is he Italy’s best ever midfielder and one of the all-time greats in his role – he is perhaps football’s last pure artist in an era of athletes.