The versatile Dane, who will face England in Wednesday's semi-final at Wembley, is just one of several Bergamo-based players shining this summer

Kasper Schmeichel was not the least bit surprised to see Joakim Maehle surging forward in the dying minutes of Denmark's crucial group-stage clash with Russia to put the seal on a stunning 4-1 win.

"The guy's a machine," the goalkeeper enthused. "I think he's still running inside in the dressing room, on the treadmill!"

Maehle's incredible stamina may have come as no surprise to Schmeichel and the rest of his Denmark team-mates, but most observers have been left astounded by the 24-year-old's dynamic displays at Euro 2020.

In a tournament illuminated by attacking full-backs, Maehle has arguably been the pick of the bunch.

And maybe we actually should have seen that coming, given the Dane plays his club football for Atalanta.

Maehle may have only joined the Serie A side last winter from Genk, for just €10 million (£9m/$12m), but it was already clear before the season was out that the Begamaschi had made yet another sound investment.

During the second half of the 2020-21 campaign, he filled in brilliantly for the injured Hans Hateboer at right-wing-back, but he also proved just as comfortable on the opposite flank, where he is presently being deployed by his country.

Indeed, Maehle has already provided the assist of the Euros so far: a wonderfully executed outside-of-the-foot cross for Kasper Dolberg's goal in Denmark's 2-1 win over Czech Republic in the quarter-finals.

Being able to properly play one wing-back role is hard enough; excelling on both sides is, therefore, mightily impressive.

"And to find those specialists that can play wing-back roles is not that easy, especially at club level.

"But it is getting easier now. I think you can see teams that are mastering that system like Atalanta, who are probably the best example." 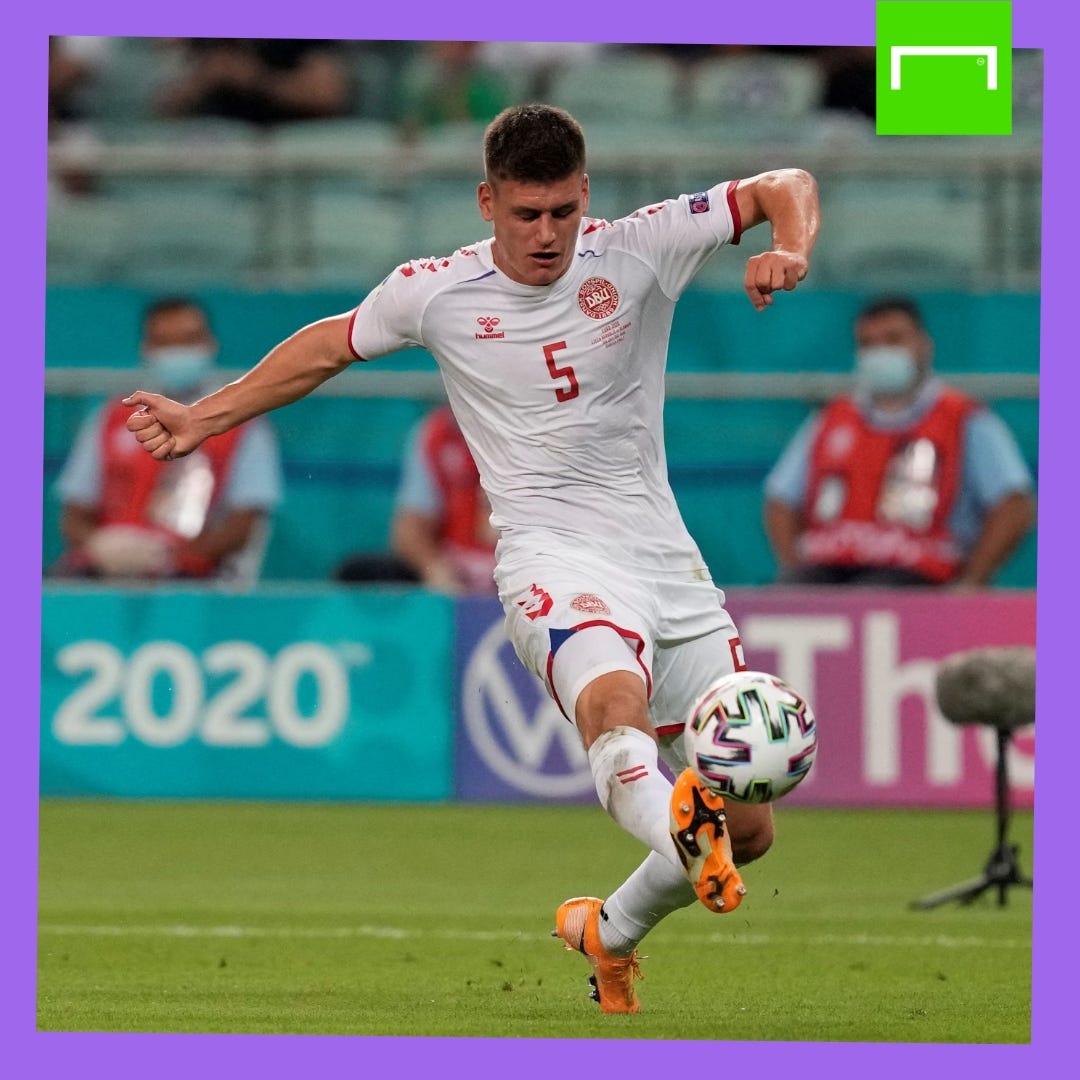 Indeed, it is no coincidence that Atalanta's first-choice wing-back on the left-hand side, Germany's Robin Gosens, produced the most devastating individual performance of the tournament so far, in tearing Portugal to shreds in the group stage.

When asked about his impressive offensive skills afterwards, Gosens told reporters, "You have to thank Mister (Gianpiero) Gasperini.

"He had a great influence on me and these qualities that seem to have slumbered in me a bit were awoken by the style of play in Bergamo.

"I've been there for four years now and have internalised the system."

Atalanta boss Gasperini certainly deserves immense credit for his role in the rise of the wing-back.

For a decade of his coaching career, "retaining numerical superiority in defence was a dogma", as far as he was concerned.

However, ahead of a game against Juventus during his second stint at Genoa between 2013 and 2016, he had something of an epiphany. He decided to adapt a three-man defence and effectively go one-v-one at the back.

"I gained a spare man that I could commit to tactical manoeuvres," he told the Gazzetta dello Sport. "It was worth the risk. The Atalanta defenders you see attacking constantly today were born from that intuition."

Of course, it is not just Atalanta's defenders who have excelled at the Euros. 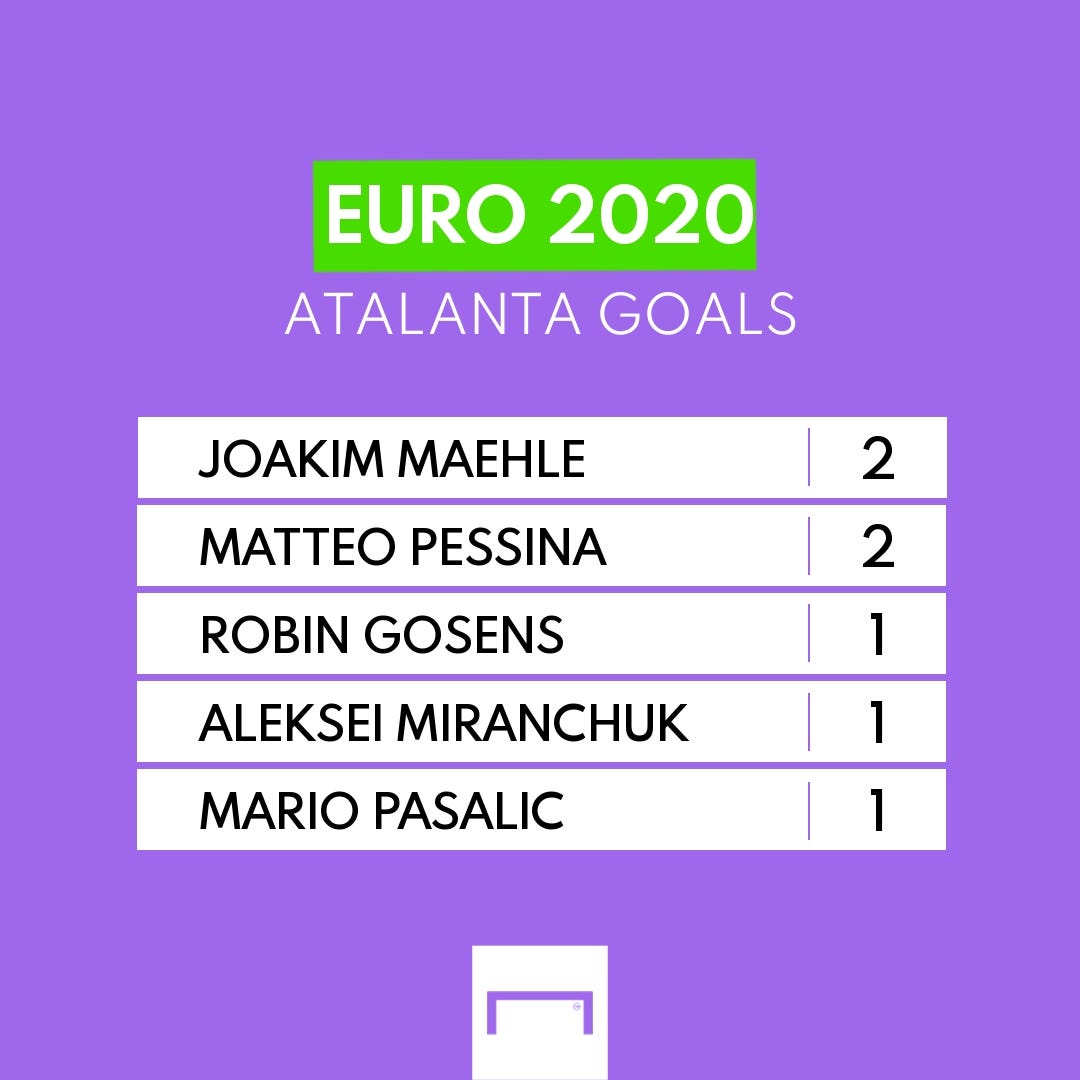 Of the nine Atalanta players called up for the Euros, only one - Netherlands midfielder Marten De Roon - has not been involved in a single goal.

These remarkable numbers are testament to not only Gasperini's footballing philosophy, but to the club's incredible recruitment programme.

Despite having just the 11th-highest wage bill in Serie A, Atalanta have just qualified for the Champions League for the third successive season.

They are, quite simply, the best pound-for-pound team in the world thanks to their mastery of the transfer market.

“We select players for roles that the coach indicates, but also have to take into account that we cannot go beyond a certain figure," Atalanta president Antonio Percassi told Sky Sport Italia last year. "Keeping the books balanced is fundamental for us."

They have done this by selling both graduates from their world-renowned academy and previously underachieving players they have developed into top-class performers.

We need only return to the Euros to provide a perfect example of the former.

Atalanta signed Sweden attacker Dejan Kulusevski from Brommapojkarna in 2016 for €100,000, and he became a youth-team star.

He made just three appearances for the senior squad but excelled during a loan spell at Parma, which prompted Juventus to agree to a deal that could end up being worth €44m (£40m/$51m) to Atalanta.

At a time when the pandemic has brutally exposed the reckless way in which top teams such as Barcelona are run, Atalanta are a paragon of prudence. 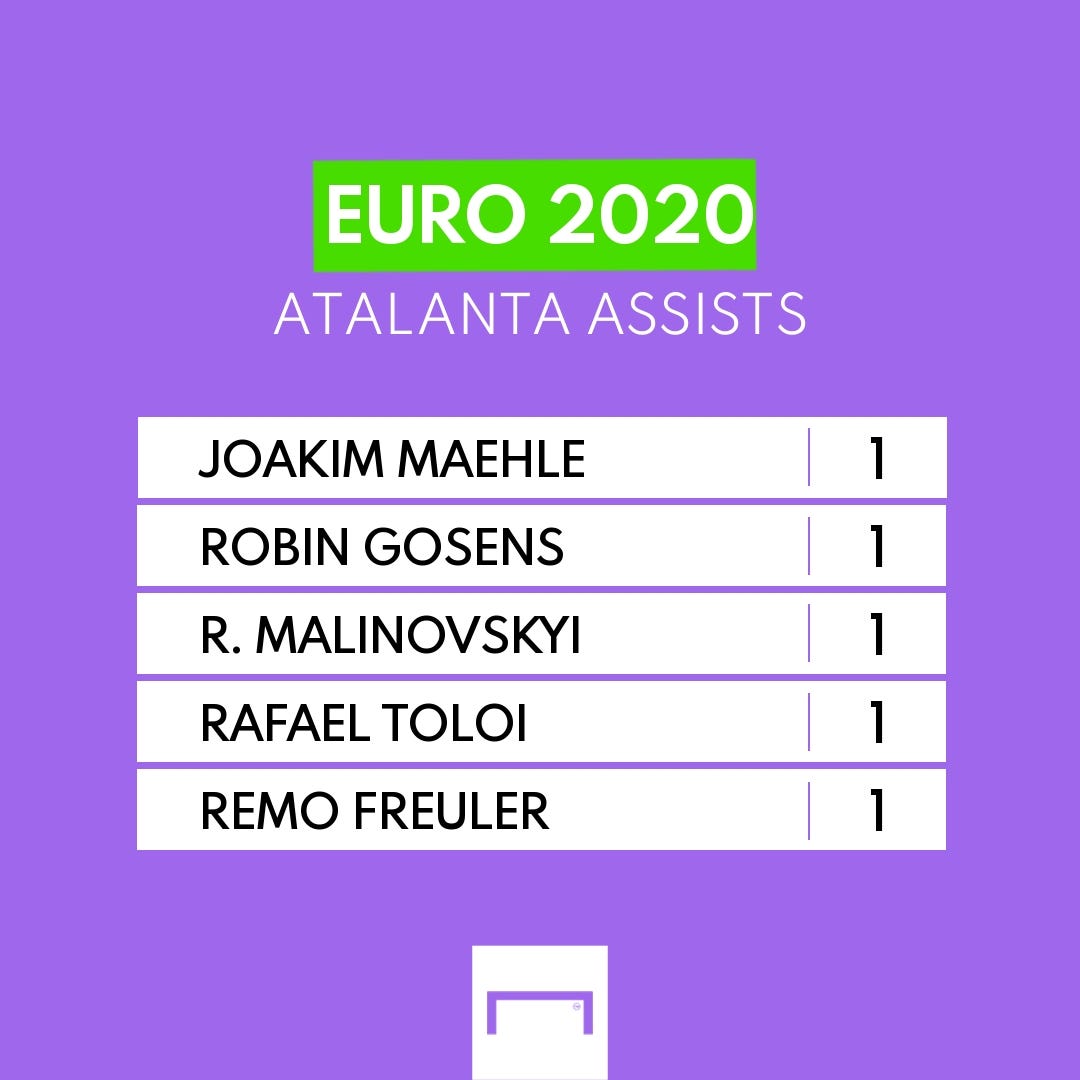 Of course, there is an obvious danger that some of their Euro 2020 stars will be targeted by bigger, richer clubs. But it is important to bear two things in mind.

Firstly, regular Champions League football, coupled with a sound business model, means Atalanta are no longer under any obligation to sell players.

Secondly, they have repeatedly proven themselves capable of replacing key men.

Franck Kessie (€28m/£24m/$33m), Andrea Conti (€24m/£21m/$28m), Roberto Gagliardini (€22m/£19m/$26m), Alessandro Bastoni (€31m/£27m/$37m) and even former club captain Papu Gomez (€5m/£4m/$6m) have all left in recent years, yet Atalanta have continued to go from strength to strength by invigorating the likes of Luis Muriel, Duvan Zapata and Josip Ilicic, and making bargain buys such as Juventus reject Cristian Romero, who is now shining for Argentina at the Copa America.

Only last summer, Belgium's Timothy Castagne was snapped up by Leicester City, but he has since been superbly replaced by Maehle at a third of the price.

Manchester United, meanwhile, could pay up to €48m (£41m/$57m) for youth prospect Amad Diallo when all add-ons and bonuses are factored in.

This is key to understanding the Atalanta way. It is not about individuals, but the club.

From top to bottom, everyone is pulling in the same direction, united in their belief that even in a modern era dominated by petro-dollars and state-funded clubs, it is still possible to not only compete, but to succeed.

The 'secret' is investing in youth while spending shrewdly and embracing a clear footballing philosophy.

As Mino Favini, the mythical mastermind behind Atalanta's academy, once said, "We don't create phenomena, but we do create good players."

Euro 2020 has well and truly backed up that claim.

Indeed, while we do not yet know who will lift the Henri Delaunay trophy at Wembley on Sunday, one could argue the tournament itself already belongs to Atalanta.