David Beckham is one of the most celebrated and recognisable modern-day footballers, finding success when he came up at Manchester United and won the famed treble before enjoying further spells at the likes of Real Madrid, LA Galaxy and Paris Saint-Germain.

The former England captain is a celebrity off the pitch as much as he is on it, and remains a sporting icon even after his retirement from the game in 2013.

He's one of the most affluent figures in the game as well and continues to rake in money through his endorsement deals. But what else do we know about the famed former Three Lions midfielder? Goal takes a look.

1. When Beckham was 11 years old, he won the acclaimed Bobby Charlton Soccer Schools National Skills competition – which led to a trip to Barcelona, where he drew the attention of a Manchester United soccer talent scout.

2. Following the end of a season-long loan at Preston North End, he returned to Man Utd and came up in the side as an attacking midfielder. The next season, he helped the Red Devils to the Premier League and FA Cup double as Six Alex Ferguson's faith in him ultimately reaped the rewards.

3. During his earlier days of fame, Beckham – who is from London's East End – was known for his "common" sounding voice that was of a slightly higher pitch. He took voice coaching lessons to improve his accent, taking elocution classes that deepened his voice and allowed him to talk more eloquently (for instance, he now pronounces the "H" at the beginning of words that start with that letter).

4. The midfielder met future wife Victoria Beckham, "Posh" Spice of the Spice Girls, in the United players' lounge after a charity football match in 1997.

5. At the time, Victoria was already famous as a member of the girl band. But Beckham still had yet to achieve worldwide fame as a footballer for Manchester United.

6. As a skilled midfielder, Beckham gathered acclaim for his ability to "bend" his free kicks, curving the ball around or over defenders in order to score. The 2002 movie Bend it like Beckham, starring Parminder Nagra and Keira Knightley as young female footballers trying to achieve success in the male-dominated sport, is a tribute to him.

7. Beckham’s 1998 World Cup was a turning point in his career. During an infamous match against Argentina, he was given a red card for kicking Diego Simeone when the score was tied 2-2. Argentina went on to win the game on penalties, booting England out in just the second round. Upon his return home, he was met with harsh criticism from both the media and the public.

8. The criticism affected Beckham. He publicly apologised, saying: “I will always regret my actions. I want every fan to know how deeply sorry I am.”

9. Despite the disappointment with England, he was a pivotal part of the successful Man Utd side of the mid-to-late 1990s that dominated English football. In 1999 he helped the team win the treble. He became one of the world’s most celebrated midfielders during his eight-year spell at Old Trafford, scoring goals in 262 games and winning six Premier League titles. 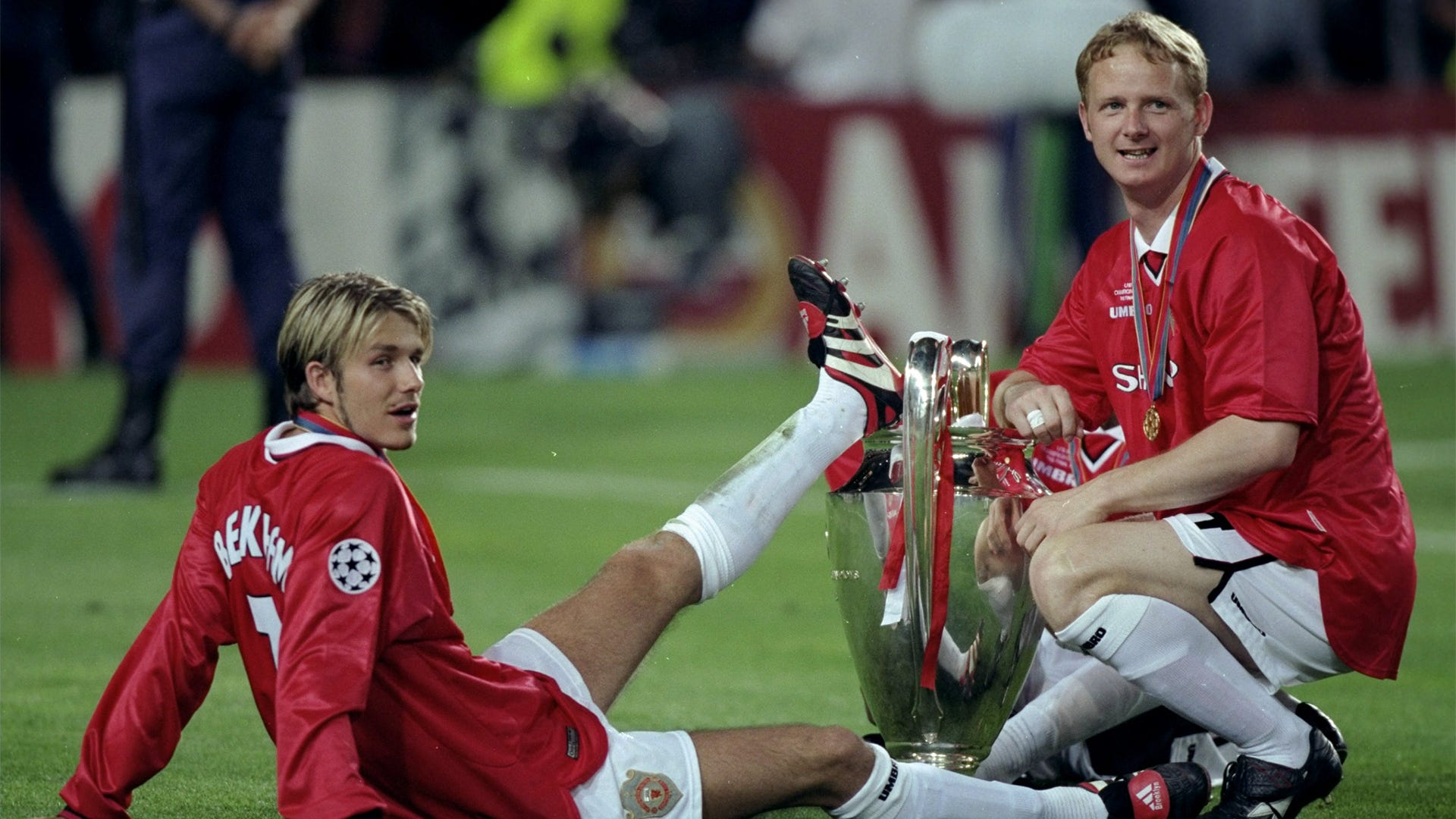 10. Victoria's nickname for her husband is "Golden Balls". We can only hazard a guess as to why.

11. He had a key role in the 1999 Champions League final against Bayern, providing both the corners to set up Teddy Sheringham and Ole Gunnar Solskjaer that enabled the Red Devils' historic comeback.

12. Beckham was the first ever English player to collect two red cards, and the first Three Lions captain to be sent off.

13. In 1999, David and Victoria bought their most famous home in Hertfordshire – unofficially dubbed "Beckingham Palace" – which is estimated to be worth £7.5 million.

14. His life, both on and off the pitch, has inspired such interest that Staffordshire University started offering a course on Beckham as well as the sociological implication of his career. The course, which is no longer available, is based on the notion that Beckham's 1998 World Cup disappointment defined an era in England not dissimilar to the way the assassination of John F. Kennedy affected the United States.

15. Beckham's time at Manchester United ended horribly, when he was hit in the head with a boot that manager Ferguson kicked in anger. He then left Old Trafford shortly after.

16. David has the number "99" tattooed on his finger, paying tribute to 1999 being the year in which he helped Man Utd win the treble, married Victoria and had his first son Brooklyn.

17. He has a tattoo of Victoria's name in Sanskrit, but it is actually spelled incorrectly. The actual translation turned out to be "Vihctoria."

18. The couple named their first son Brooklyn as it was there when the couple found out that they were expecting.

19. Elton John is godfather to Brooklyn and Romeo Beckham. Their godmother is Elizabeth Hurley.

20. In 2000, Beckham was named the captain of the England national team and scored a last-gasp equaliser in a World Cup qualifier against Greece to send England to the finals. He netted the winning penalty in the game against Argentina in the 2002 World Cup, but England were eliminated in the quarter-finals.

21. At the 2004 European Championships, Beckham missed a crucial penalty in the shootout as England were knocked out by Portugal in the quarter-finals.

22. The wedding of “Posh and Becks” garnered frenzied international coverage, and the event reportedly cost £628,000. Victoria wore a diamond-encrusted crown, and Beckham wore an ivory suit. The couple sold the pictures of their wedding to OK! magazine for £1.73m.

23. Beckham never personally appeared in the 2002 movie "Bend It Like Beckham", except in archive footage. He and his wife planned to make cameo appearances, but scheduling proved difficult, so the director used lookalike Andy Harmer instead. 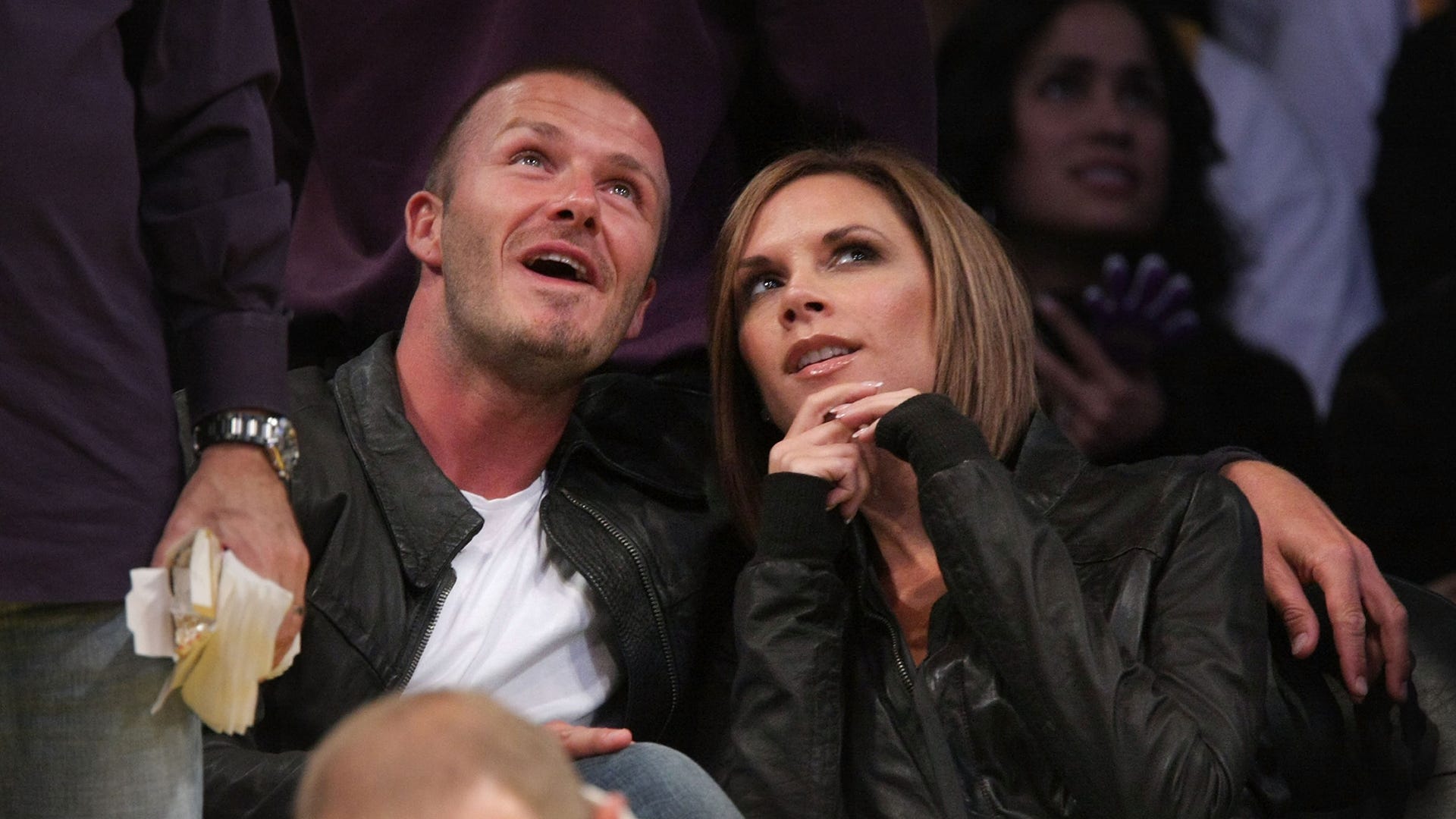 24. In 2003, Beckham moved to La Liga giants Real Madrid following a tug of war with the other Spanish giant, Barcelona. Beckham became a member of the "Galacticos" at Real Madrid as he teamed up with some of the world's best players such as Ronaldo, Luis Figo, Zinedine Zidane and Roberto Carlos. He played for Real Madrid for four years and netted 13 goals.

25. Upon signing for Los Blancos, Beckham had to choose a new jersey number. His old number, #7, was already taken by Raul, so he chose #23 as it was ex-basketball player Michael Jordan's number.

26. In 2003, he signed a £125m lifetime contract with Adidas, earning almost half the money upfront continuing to earn percentages of profits on all of his branded products.

27. Beckham makes a cameo appearance with Zidane and Raul in the 2005 film Goal!: The Dream Begins.

28. He played in his final World Cup tournament in 2006 in Germany and scored a free kick in the last-16 game against Ecuador to send England to the quarter-finals, where they lost to Portugal (again).

30. Prior to his move to LA Galaxy in 2007, the side pre-sold more than 250,000 jerseys before the midfielder even signed his contract.

31. Tom Cruise hosted a "Welcome to LA" party after Beckham joined the Galaxy.

32. Within 48 hours of David Beckham signing with the team, the Galaxy sold more than 5,000 season tickets.

33. In the movie Love Actually, “David Beckham’s left foot” (as well as his right) is mentioned as being one of Great Britain's greatest treasures.

34. Becks’ favourite dish is the east London delicacy of pie and mash with a side of jellied eels. When he lived in Paris, he couldn’t find it anywhere, so he would have it shipped to his hotel. He did the same when he played for Real Madrid.

35. Beckham surprised his wife Victoria with her own winery in Napa. The couple have a passion for wine, and Beckham was more than happy to pay a significant amount for the gift. The winery is only open to close friends and family.

36. He was the first British footballer to play 100 Champions League fixtures.

37. The former England international is an emotional guy. In an interview with BBC Radio One's Nick Grimshaw back in 2013, Beckham admitted that Bruce Willis' film Armageddon reduces him to tears every time - which makes sense, as it's an emotional story - but he then went on to say that television shows like Friends and The Office make him cry too!

39. Beckham was the first English player to win league titles in four countries: England, Spain, the United States and France.

40. He suffers from obsessive-compulsive disorder (OCD). Everything has to be precisely organised and, if possible, in pairs. Beckham says that when he stays in a hotel, he rearranges furniture and moves things around before he can feel comfortable. He also likes things to be completely neat and in straight lines. If his fridge has an uneven number of soda cans, for instance, he would throw one away just to get it “right.”

42. On the very first day of his training sessions in Paris upon signing for PSG, 150 reporters showed up to take his picture on the field. 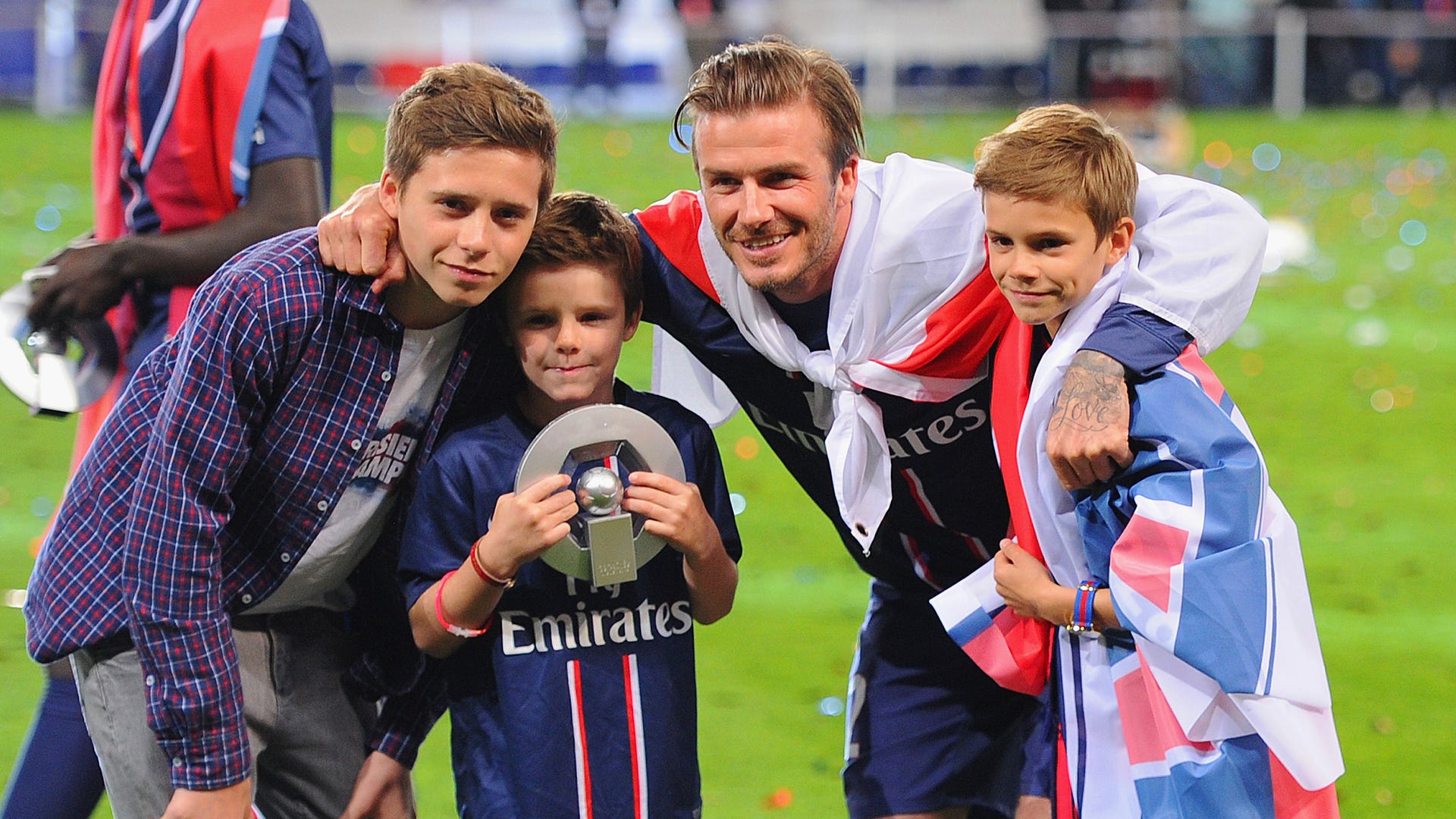 43. Every team Beckham has joined for a full season has at least won one league title while he's been with them. When Beckham was with Man Utd, they won the Premier League six times. The year 2007 was Beckham's last season with the Spanish club and saw Real Madrid claim its first La Liga title in four years. LA Galaxy won consecutive titles in years 2011 and 2012. PSG won their first French League title since 1994 when Beckham joined them in 2013.

44. The year 2014 saw the announcement of Beckham's own professional soccer expansion team, later named Inter Miami, to be based in Miami, Florida.

45. In 2015, Beckham launched 7: The David Beckham UNICEF Fund, a collaboration with the organisation to help children in danger zones around the world.

46. The ex-midfielder previously stated that should he not have become a professional footballer, he would have become an artist as he enjoys drawing cartoons.

47. Other endorsement contracts that the former football star has signed include Armani, Diet Coke, Burger King and Samsung - the latter of which earned him £21m in 2012 alone.

48. LA Galaxy honoured Beckham with a statue of him at Dignity Health Sports Park in 2019.

49. Beckham’s total net worth has been estimated at £300m. His wife is also estimated to have the same net worth, which is actually more than the net worth of the Queen of England.

50. He suffers from “ornithophobia,” which is the fear of birds.