Looking for the prime footwear available right now? From high-end to budget picks, these are top options that Umbro has to offer

All products featured on our site are independently chosen by us. When you purchase something through the links provided, we may earn a commission.

Umbro has been around forever - like for a really long time.

The company was founded in 1924 in a small parish in Chester and since then has grown to worldwide recognition. Umbro has made kits, boots and equipment for the top football teams and had a very special relationship with the England squad. Famous fans of Umbro boots include Portuguese defender Pepe and Newcastle’s own Alan Shearer.

When it comes to choosing football boots there are a lot of things to take into consideration. Mainly, which kind of pitch will you be playing on, if a pitch at all?

Football boots are divided into four main categories: firm ground, soft ground, indoor court/futsal and astroturf. We’ve broken these categories down, and have gone through Umbro’s entire collection to find the best football boots for any surface or budget.

Firm ground boots are the most popular type of boots sold, as they’re perfect for playing on well-maintained pitches in the summer which, let’s face it, is the time you want to play football the most. They are also suitable for deep winter when the grass has frozen over. They’re best in dry to slightly wet conditions and have blade-shaped studs.

The Velocita 6 Elite boots were built with attacking players in mind, with a design that aims to improve your speed with every feature. A ‘Vent Knit’ inner sock element helps assist with the freedom of movement demanded by every kick and step you take.

Add on a ‘V-Frame’ support cage that is thermally bonded for additional support, and match it with a 'Speed Mesh' exterior, you've got one outstanding finish whose supple skill belies how well it can weather the elements. 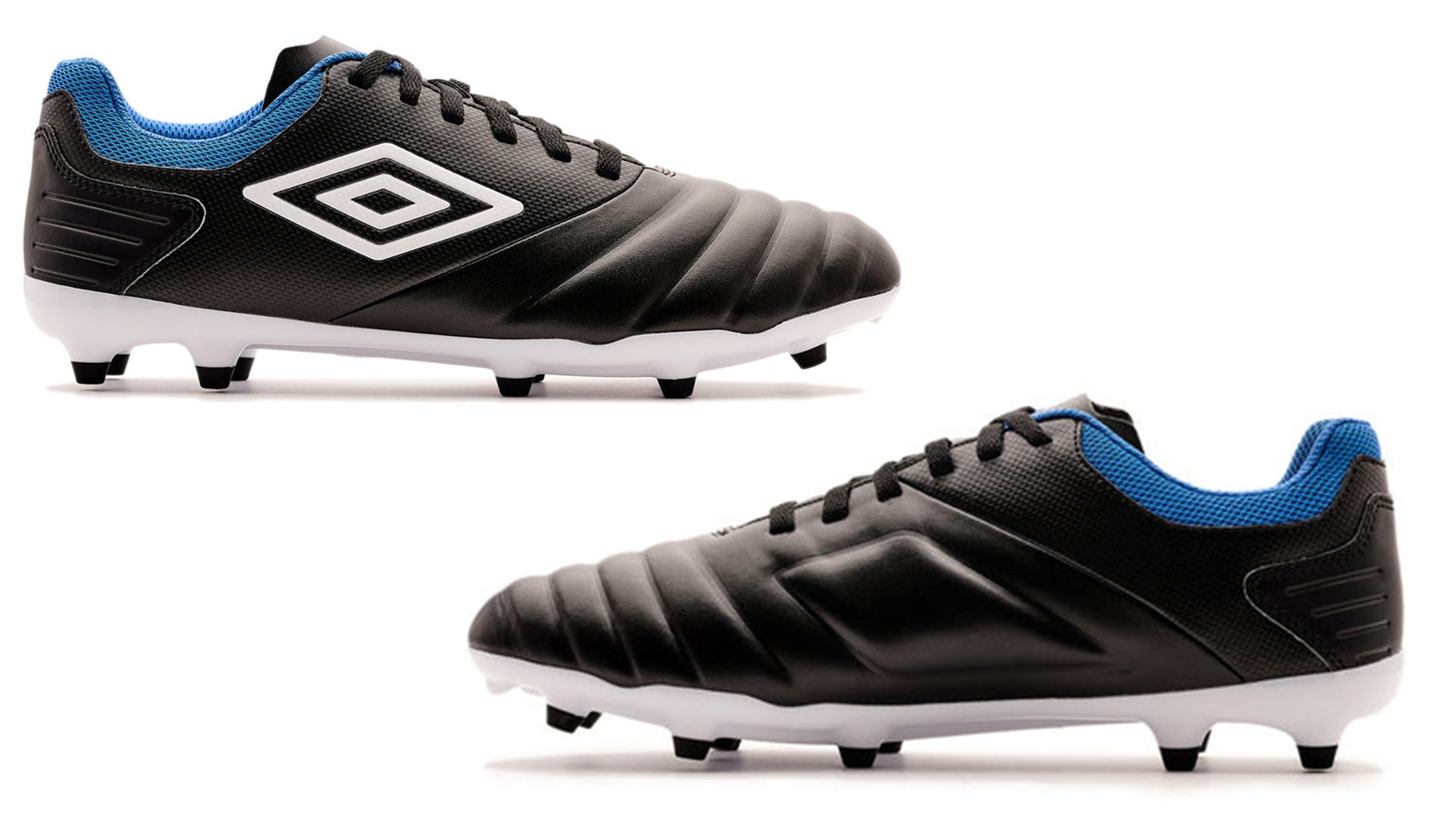 The stud positioning on the boot has been designed for maximum grip, and the D30 material used on the forefoot is perfect for absorbing impact – it’s used on motorcycle gear and industrial workwear so no incoming volley is too powerful for these boots.

These classic black and white leather football boots are reminiscent of the Speciali Umbro boots favoured by Alan Shearer.

Soft ground boots are designed for longer muddy grass which makes them ideal for playing in the wintertime. The way the studs are configured helps to get the maximum amount of traction which could come in handy living in a place as rainy as the United Kingdom. The studs are rounder and longer than their firm ground blade counterparts. 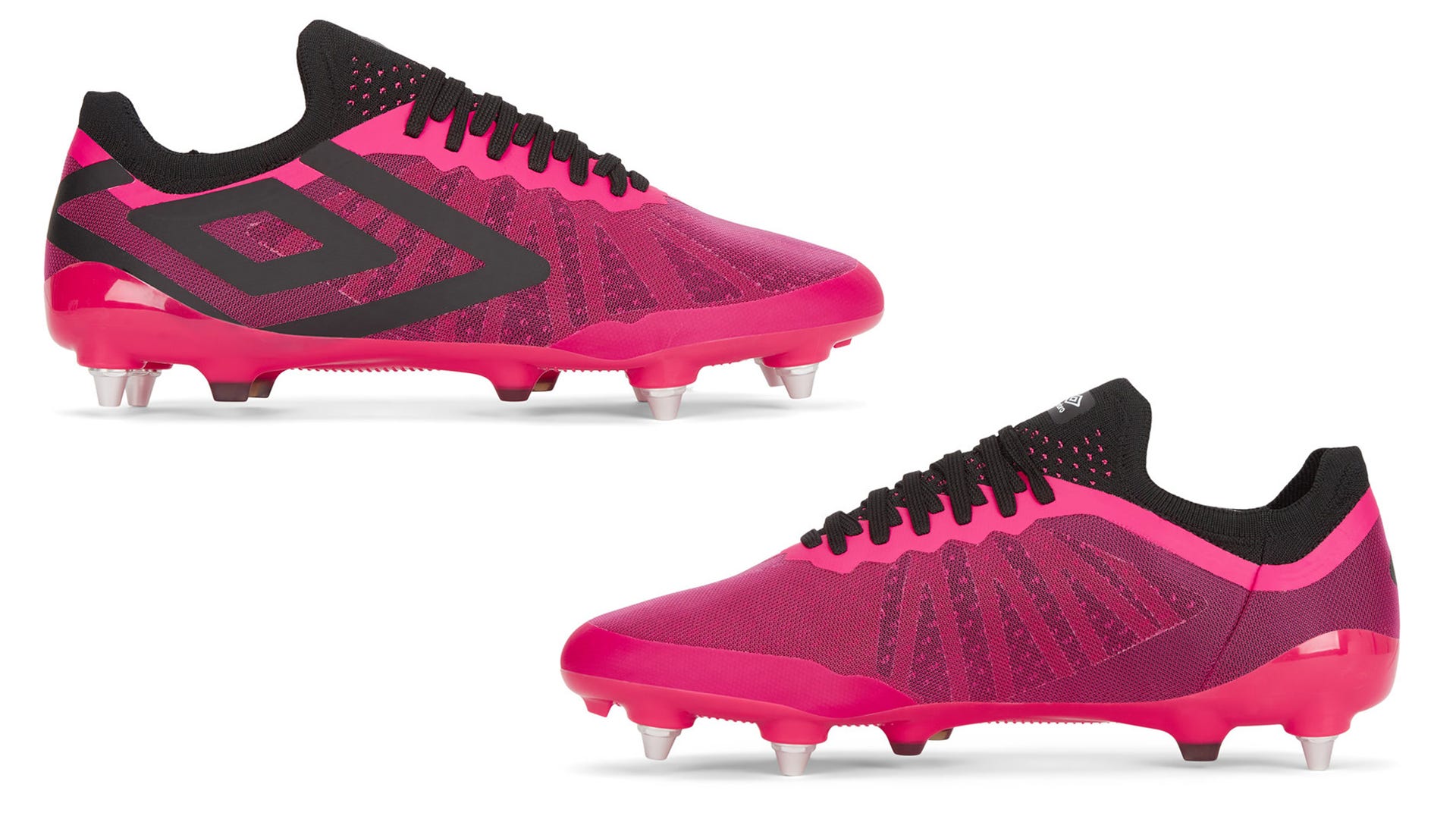 The Pebax powered outer sole claims to actually absorb energy and redistribute it, which sounds like something from a superhero movie.

The Pebax polymers are used in a lot of top sports shoes from big brands and are described as performance-enhancing, while the stud configuration on the bottom is designed for maximum traction in all directions.

Chilean striker Mauricio Pinilla, who infamously was “one centimetre from glory” at the 2014 World Cup, wore a version of the Velocita. This is a boot for those who want to run faster.

It may be a step-down in number - but it is far from a step down in quality when it comes to the Velocita Pro 5, decked out here in an attractive triple-shade of snow, fire and steel.

It's made for players who possibly favour multi-directional speed and push-off power above all else when they are on the pitch, great for twisting directions and turning matches on their head.

With a "Memory Flex" upper welded to a dynamic fit, underscored with a propane layer, it's every inch the quality boot, allowing for superb movement over those softer surfaces.

Did you know that futsal actually provided the starting point for many of the most famously creative players of our time?

Futsal shoes have to be flat and have special soles to make sure that they don’t leave a mark on the playing surface. 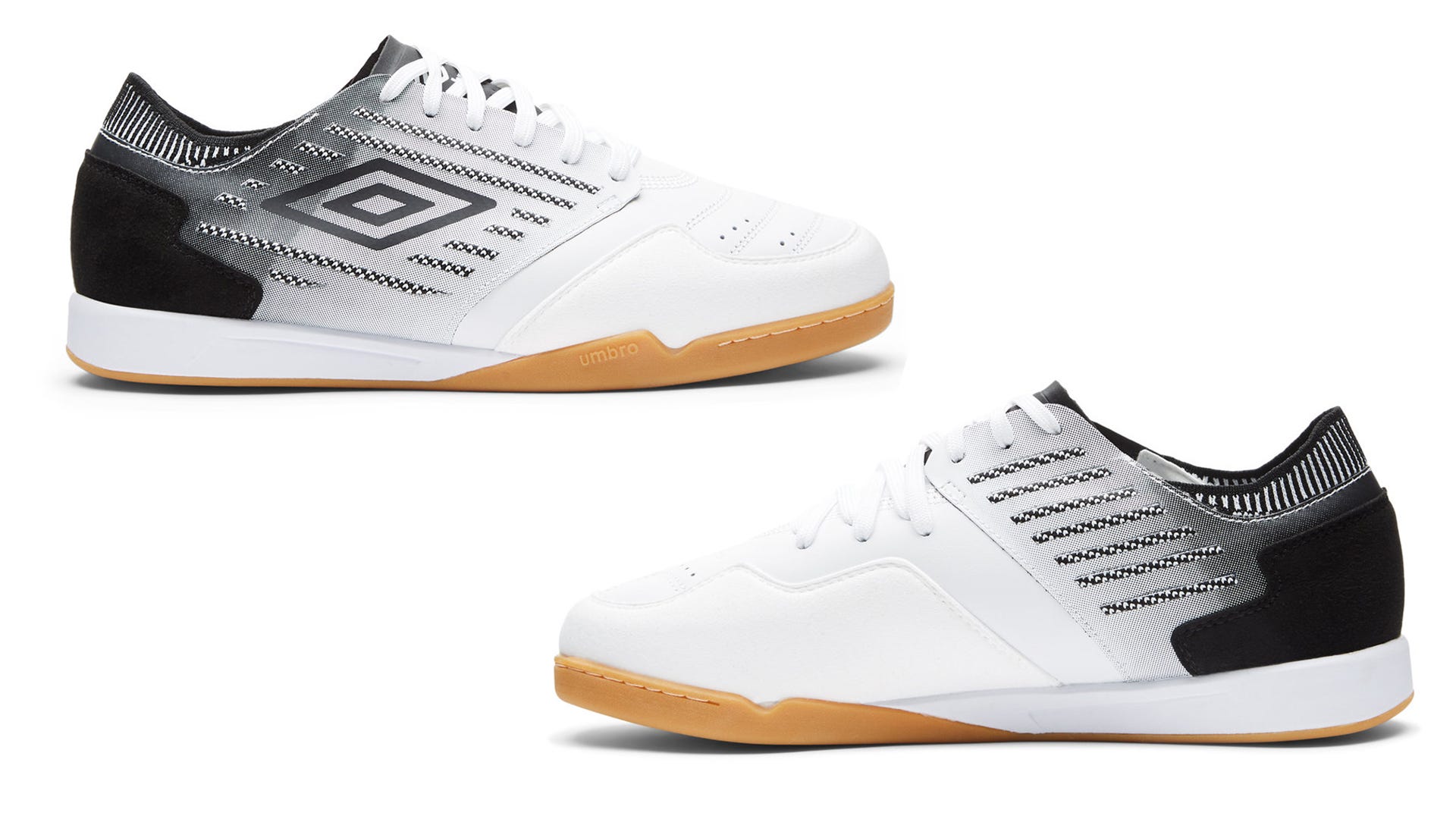 These Chaliera 2 Pros have the all-important non-marking outsole that is so important to futsal players and a full-grain leather front good for touch control. It has an EVA sole which is lighter and softer than rubber which helps you to be quick on your feet whilst providing cushioning and shock absorption.

The herringbone design on the base allows you to bend the shoe without damaging it and the pivot point marked ‘360 zone’ allows you to twist and turn with ease. 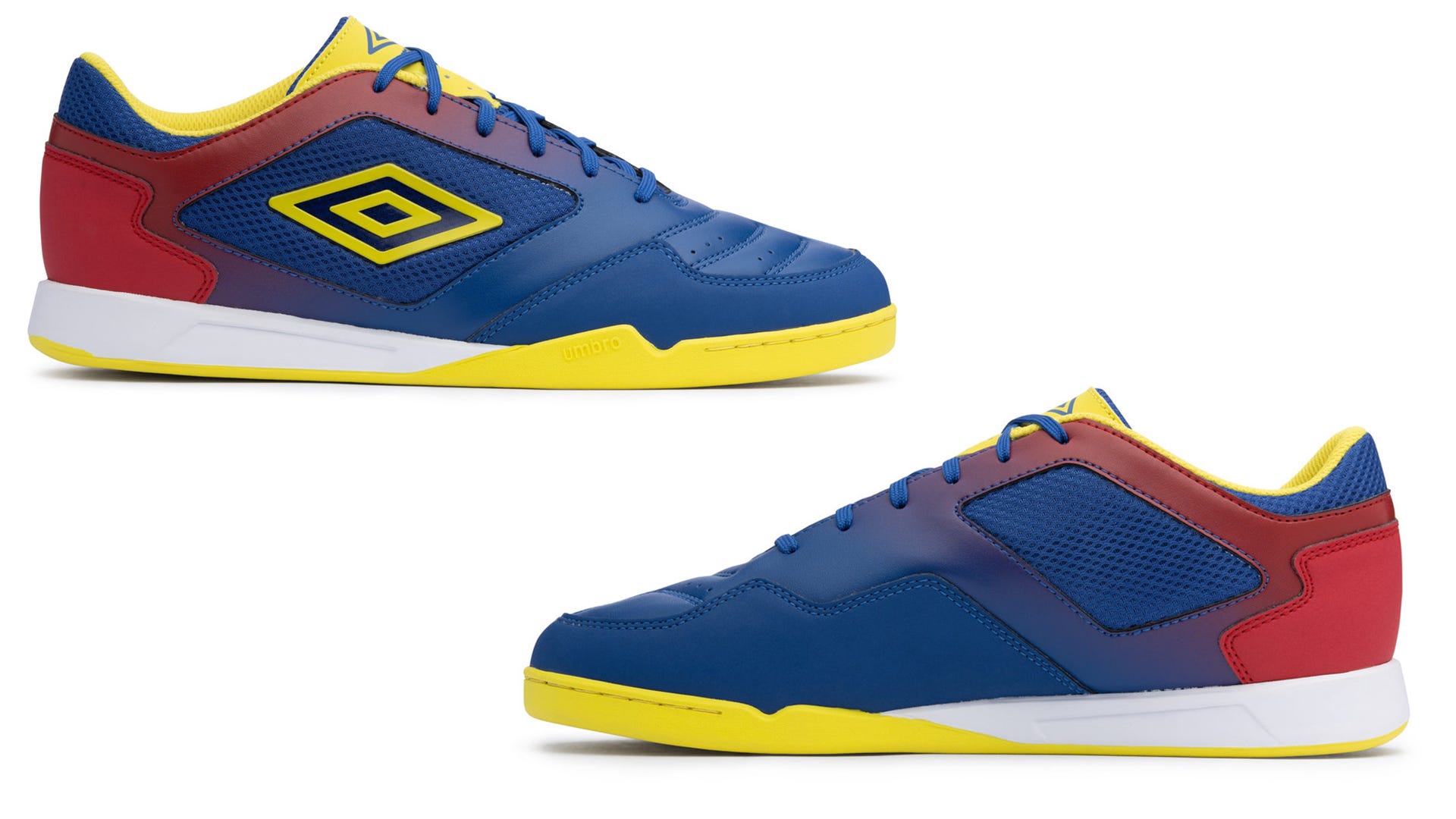 The upper part of these shoes is made from PU which is a synthetic leather alternative – useful for those who try and avoid wearing leather. This shoe is lightweight and breathable, perfect for all the hours playing futsal. It also features a non-marking sole and 360 pivot-zone to help improve your game.

The blue yellow and red colourway pays homage to the famous Barcelona players who played futsal before turning to 11-a-side football.

When it comes to astro turf you might have heard all sorts of numbers such as 2G, 3G, 4G and even 5G but at its core, astroturf is an artificial turf that replicates the qualities of a grass football pitch.

Because it’s artificial, you need special trainers or shoes that help you get a good grip on it – astroturf shoes tend to have many short rubber studs on the sole to make this easier. 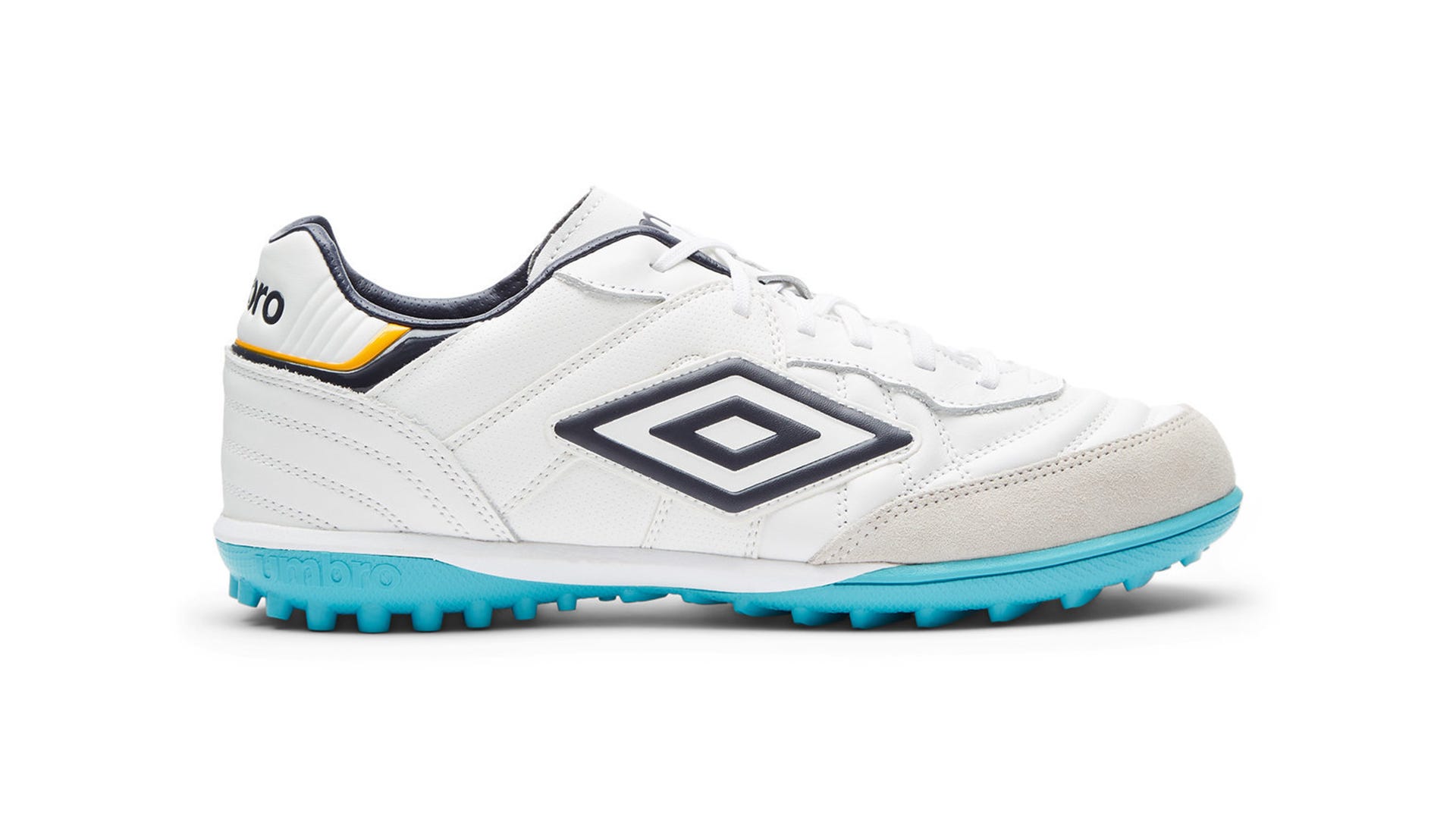 The astro turf version of perhaps the most iconic Umbro boot, depending on who you ask, the Speciali. These blue and white full-grain leather shoes will see you through training and matches on astro turf. The tongue is made from memory foam to aid comfort and help your shoe mould to your foot as well as the removable sock liner to take that feeling further.

Put pace into your game on artificial surfaces with this effort - a durable piece whose lightweight mesh upper enhances control and fluidity going forward. Its tailored stud configuration helps build upon its grip too, with a Sprint+ outsole enforcing all the additional pace you could ask for.