The Gunners will allow several players to depart over the next six months, while the situations of Mesut Ozil and Jack Wilshere remain unresolved

Arsenal are expected to sell a number of first-team players over the next six months with Alexis Sanchez, Francis Coquelin and Mathieu Debuchy among the players who are seeking permanent transfers away from the club, Goal understands.

The most significant departure will be Chilean maestro Sanchez, who came close to joining Manchester City on deadline day last summer and appears to be edging ever closer to Pep Guardiola’s side after both clubs began negotiations ahead of a potential January move .

Germany talisman Mesut Ozil and Jack Wilshere have yet to sign new contracts although proposals have now been made to both player’s representatives, with Gunners boss Arsene Wenger previously suggesting that there are differences in the financial expectations over an extension for the England midfielder.

Chief executive Ivan Gazidis has made a number of backroom changes in the past year with the likes of Raul Sanllehi coming in as a de facto Director of Football from Barcelona, Sven Mislintat arriving as head of recruitment from Borussia Dortmund and former Team Sky legal expert Huss Fahmy joining as a contract specialist last summer. 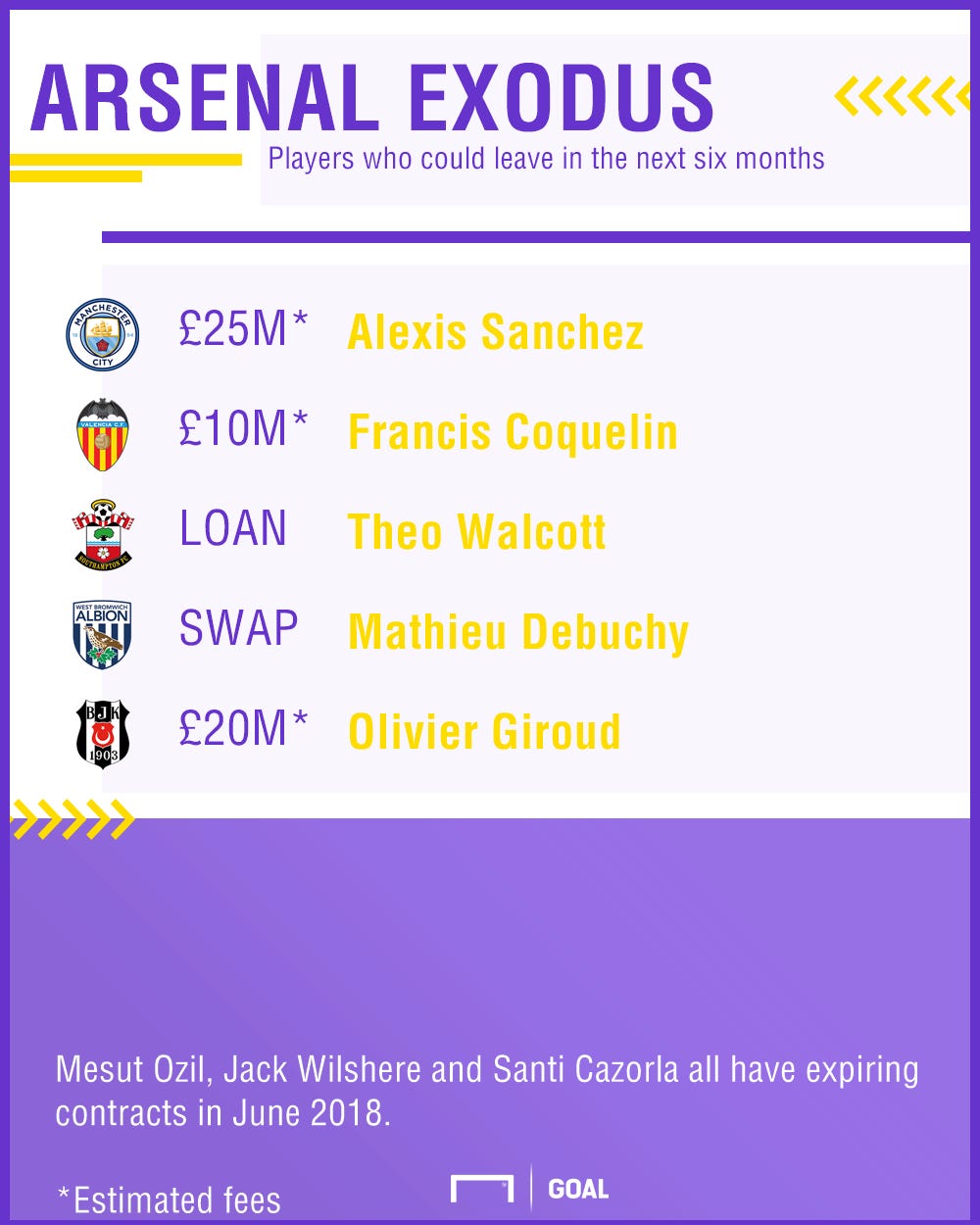 Those changes are the start of a fresh recruitment drive at the club which is likely to transfer itself onto a clear-out of the playing side, with France midfielder Coquelin, who wants to leave in search of regular playing time, targeted by West Ham, Valencia and the subject of enquiries from teams in Ligue 1 and Turkey.

He shares the same agent as Olivier Giroud and it’s understood that the Frenchman’s preference would have been to leave Arsenal this month if it wasn’t for a hamstring injury which has kept him sidelined.

Mathieu Debuchy’s name has been thrown in the mix during talks over a deal to sign West Brom defender Jonny Evans, a player who is also being targeted by Manchester City.

Gunners boss Arsene Wenger wants to sign an experienced centre-back in January with Per Mertesacker set to retire at the end of the season and Laurent Koscielny's injury problems likely to minimise his game involvement, and believes 30-year-old Evans' Premier League experience would bolster a vulnerable backline which has shipped 12 goals in five games.

Theo Walcott, meanwhile, wants to leave on loan in a bid to increase his chances of being selected for England at the 2018 World Cup , while Greek champions Olympiacos are trying to sign forgotten Gunners forward Joel Campbell, who is currently on loan at Spanish side Real Betis.