This extract from Graham Hunter's new book, Spain: The Inside Story of La Roja's Historic Treble, looks at how the Clasico rivalry threatened the world champions' dominance
Tensions were at a high between Barcelona and Real Madrid players in 2011-12 and domestic rivalries threatened to boil over into the national side as Vicente Del Bosque's men sought a third straight major tournament success

It transpired that in order to win Euro 2012, Spain not only had to overcome Italy, Ireland, Croatia, France and Portugal, but Jose Mourinho, too.

A foundation stone of all Spain’s triumphant football since late in 2006 has been an unbreakable spirit between players, whether starters or substitutes. In qualifying matches away from home on disastrous, cow-patch pitches, everyone pulls together. Living cheek by jowl for six weeks in order to win a tournament, everyone pulls together. Suddenly, this unity is threatened by a new force in Spanish football.

Under Mourinho, Madrid often play superbly. Along the way, however, he both espouses and encourages ‘win at any cost’ tactics to fracture what he sees as unacceptably cosy friendships between key Spain players on either side of the Clasico divide. Tension mounts and players from both clubs begin to do and say things that threaten to do immense damage to the unity within the national squad.

Along the way, the signals given by Vicente del Bosque shift from affable confidence that this harmony is indestructible, to concern that conflict between the clubs could infect his dressing room, then to the hardline: "Anyone who takes this kind of behaviour into my squad will be excluded."

From the day Mourinho takes over at Madrid until Euro 2012 there are 11 Clasicos. These matches produce 82 bookings and nine red cards, plus an additional expulsion for the Madrid coach. There are numerous explosive confrontations between players who have won European and world titles together, but the moments which change everything come toward the end of the thrilling second leg of the Spanish Supercopa, in August 2011. Marcelo earns a red card for a two-footed, off-the-ground lunge at Cesc Fabregas. Both teams converge around the two participants; the benches empty - David Villa and Mesut Ozil are red-carded. Mourinho sneaks around the back of the crowd and pokes a cowardly finger into Tito Vilanova’s eye. Before it all dies down, Xavi and Iker Casillas end up recriminating with each other, face-to-face. 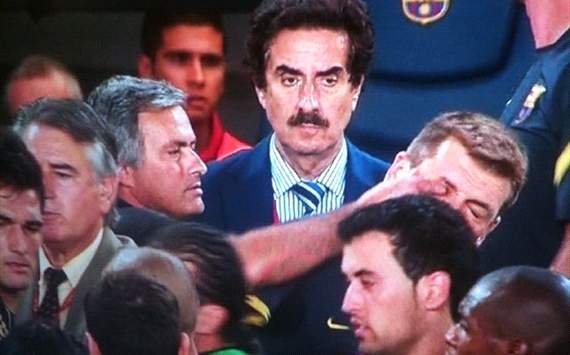 The Madrid and Spain captain gives an on-pitch television interview at the final whistle. He was half the length of the field away from Marcelo’s red-card offence, but adopts the Mourinho doctrine in reacting to an incident that he hasn’t seen properly.

"There will have been a tackle, they will have thrown themselves down as usual."

He is talking about Fabregas, who produced the assist for Andres Iniesta’s World Cup-winning goal, allowing Casillas to lift the most famous trophy in football one year previously.

Gerard Pique says: "I don’t believe this is down to the Madrid players. We’ve defeated them 6-2 at their stadium but none of this kind of thing happened. I have lived with them at competitions and they have been terrific people from the first minute. I don’t think they are to blame; it’s just that they are under the orders of a guy who is trying to damage Spanish football. When we all get together for the national side we will be open to making sure that the team is as strong as ever and that the atmosphere is as good as ever."

Iker Casillas’s brother Unai, a diehard Barca fan, watching at home on television and beneficiary of close-ups and replays, doesn’t agree with his sibling’s assessment of the red-card incident. He assures his brother that he has got it wrong.

Iker watches the television images for himself and then contacts Puyol and Xavi and admits he said the wrong thing, and would they pass that on to Fabregas please. It’s more than enough to heal the wounds from a poisonous series of derbies.
Those who drew a link between Casillas acting like a decent, mature, team-mate and the decline in his relationship with Mourinho, culminating in him being dropped from the Madrid first team, found support from Vicente del Bosque when the Spain coach reflected on his captain’s club situation in September 2013.

"Iker tried to restore harmony in the situation between Barca and Madrid and it cost him. When there were difficult moments in the national team Iker helped to protect the good atmosphere and the ability of Barca and Madrid players to pull together for Spain so that we could win the European Championship in 2012. This wasn’t well received and restoring the peace has been detrimental to Iker. Everyone should take the stance that the Spain team is above, or at least equal to, the interests of any of our clubs."

Days after the 2011 Supercopa, one of the most placid and easygoing of La Roja’s players, Santi Cazorla, commented that, for Spain, the situation was "reaching its limit".

"As much as you want to avoid it, these situations do start to influence peoples’ relationships. All the rest of us can do is hope that it’s all sorted out as soon as possible, that some sort of agreement is reached. It is what everyone wants."

Questions about the disharmony between these two groups of players would follow Del Bosque and his squad all the way to the finals of Euro 2012. There, they would finally and definitively be answered.

SPAIN: THE INSIDE STORY OF LA ROJA'S HISTORIC TREBLE by Graham Hunter is published by BackPage Press (@backpagepress) on November 15 in hardbook and ebook