By Sam Wells
As the Toon say 'bonjour' to a legion of footballers from France, they regrettably wave 'au revoir' to a bunch of berets as the hats are sold for a bargain £1 each 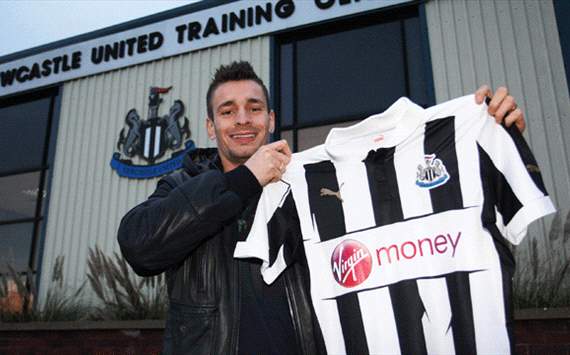 Newcastle, after splashing upwards of £20 million on a French revolution this transfer window, are clearly looking to make some merchandising money from across the Channel by launching a Toon beret.

The recoup, however, may not cover their new assortment of French footballers, given that the berets are being sold for a bargain £1 each.

Enscribed 'Le Toon Ami', which, as Extra Time's limited knowledge of French can reliably inform the non-linguists amongst you, means 'The Newcastle Friend'. ET knows what they're getting at, but think someone probably should've informed them that army in French is 'armée', so it's not too much of a jump.

We can assume that the phrase gets somewhat lost in translation but, regardless, it's most certainly a stylish little number that should sell très rapidement.

They've certainly been buying French produce très rapidement (meaning very quickly, in case you haven't worked it out and are averse to using translators) as Mathieu Debuchy, Mapou Yanga-Mbiwa, Yoan Gouffran, Massaido Haidara and Moussa Sissoko have all come in over the past month to join players such as Yohan Cabaye already at the club.