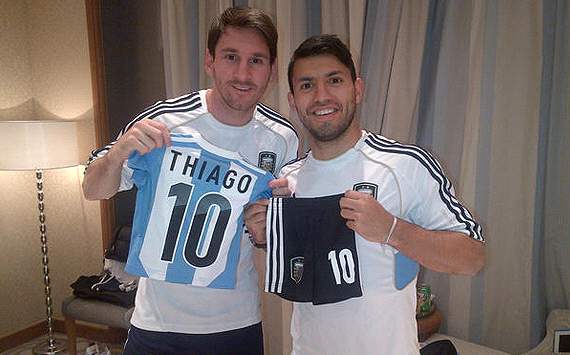 Sergio Aguero has wasted no time in making a play to be the godfather to Lionel Messi's son Thiago after delivering the gift of a replica kit to the Barcelona star's new baby.

Messi is the godfather of Aguero's son Benjamin, and the Manchester City striker is obviously hoping that the favour will be returned by his fellow countryman when the time comes.

The 24-year-old had previously sent his congratulations to the three-time Ballon d'Or winner via Twitter and had promised a present to celebrate the new arrival.

"Welcome, Thiago!. Just one thing: I'll get you an Argentina shirt. Congratulations Leo!" He wrote.

The two friends have not had time to see each other since Thiago's birth at the start of November, but Aguero took the opportunity of the international fixtures to live up to his promise and deliver his gift.

He again took to the social networking site to post a picture of himself and Messi with the kit which was adorned with the name 'Thiago' and the No.10 which his father has made his own.