ANALYSIS: The Barcelona legend became La Liga's all-time top goalscorer on Saturday night and we decided to take a look at his most impressive marks for club and country
By Ben Hayward | Spanish Football Writer

Lionel Messi has made a habit of rewriting history at Barcelona and his hat-trick against Sevilla on Saturday means he is now La Liga's all-time top goalscorer. The previous mark had stood since 1955. But by the time he has finished, Messi's may last forever.

Asked about the possibility of Messi surpassing Telmo Zarra's recently, Luis Enrique's reply was that the record was of little interest. After all, it was not a matter of if, but when the tally would be surpassed.

Perhaps more significantly, the Barca boss claimed his players had not commented on the record in the dressing room. And that's possibly because Messi has made a career of achieving the unthinkable, normalising what for most is impossible.

Virtually every time he plays, the Argentine attacker appears to shatter some kind of mark or milestone. His propensity for record-breaking on the football field is nothing new - and it knows no bounds.

Still only 27, the Argentine celebrated 10 years since his Barcelona debut last month and is likely to go on and set many more marks over the coming campaigns. But in light of his latest achievement in La Liga, Goal looks at some of his most remarkable records to date and a few others he is close to breaking for club and country. 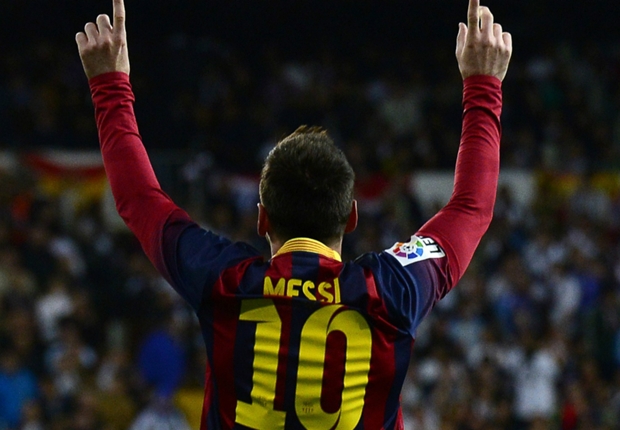 3 - The Argentine holds the record for most hat-tricks in the Champions League, having hit four (against Arsenal, Viktoria Plzen, Bayer Leverkusen and Ajax).

4 - Messi is the only player in history to win four Ballons d'Or. Johan Cruyff, Michel Platini and Marco van Basten all won three. He is also the only footballer to finish as top scorer in the Champions League on four separate occasions.

5 - The Argentine is the first player in Champions League history to score five goals in a single match and the first to do so in the formerly named European Cup since Ajax's Soren Lerby in 1979. He is also the first Barcelona player to net five since Jose Antonio Zaldua in 1965.

6 - In 2009, Pedro became the first player in history to score goals in six competitions over one year. But two years later, Messi emulated his Barcelona team-mate by netting in La Liga, the Copa del Rey, the Champions League, the Uefa Super Cup, the Spanish Supercopa and the Club World Cup.

7 - The 27-year-old has been on the final three-man shortlist for the Ballon d'Or seven successive times between 2007 and 2013, more than any other player in history.

12 - The forward's 12 goals for Argentina in 2012 saw him match a feat achieved by compatriot Gabriel Batistuta in 1998. No other player has scored as many goals in a calendar year for Argentina.

14 - Messi scored 14 times in the 2011-12 Champions League to equal Jose Altafini's record for goals in a European season, since surpassed by Cristiano Ronaldo (17) in 2013-14.
19 - The Argentine netted against all 19 teams in La Liga in consecutive matches in 2012-13, a feat never before achieved. Following a break through injury, he also converted in his next two matches and is the only player in history to score in 21 consecutive games in the Primera Division.

21 - Messi has scored in 21 different cities in the Champions League, more than any other player. He is also the top scorer in Clasico clashes with 21 goals in the famous fixture, having surpassed Real Madrid legend Alfredo Di Stefano's mark of 18 earlier in 2014.

22 - No player has won more trophies at Barcelona than Xavi, but Messi is just one behind his 34-year-old team-mate on 21 titles for the Catalan club. Madrid legend Paco Gento holds the Spanish record with 23, but Leo looks likely to overtake them both as long as he stays in Catalunya for the coming campaigns.

25 - Messi shares the record for most international goals in a calendar year for club and country with Cristiano Ronaldo and Vivian Woodward.

27 - The 27-year-old now has 27 hat-tricks for Barcelona, one more than the 26 scored by Cristiano for Madrid. Of those, 20 have come in La Liga, leaving him just two behind the Portuguese, Telmo Zarra and Alfredo Di Stefano (all on 22). He has also scored three trebles for Argentina.

40 - The Rosario-born attacker is the first player in the history of Spanish football to score 40 or more goals in five consecutive seasons. He hit 47 in all competitions in 2009-10, and then 53, 73, 60 and 41 respectively in the next four campaigns.

71 - The 27-year-old has 71 Champions League goals and recently equalled the mark set by former Real Madrid forward Raul. Cristiano Ronaldo (70) is also in line to break the Spaniard's record, but Messi will get first crack as Barca are in action away to APOEL on Tuesday. The Argentine has scored his 71 in just 90 games, however, while the Portuguese has played 107 times in Europe's premier club competition. Raul's 71 goals came in 142 appearances.

101 - With 101 assists in La Liga, the Argentine is just six short of the record held by former Barca and Madrid winger Luis Figo (107). However, statistics for assists only date back to 1995.

142 - Leo is the only player in Barcelona history to score 100 or more league goals at Camp Nou, with 142 of his 253 netted at the Catalan club's famous home.
203 - Messi is the only player to score 200 goals for Barcelona at Camp Nou, having reached that mark (in all competitions) with his strike against Eibar last month. His hat-trick on Saturday means he now has 203.

253 - The Argentine is now La Liga's all-time top goalscorer, having surpassed Athletic Club great Zarra (251) with his hat-trick in the match against Sevilla on Saturday.

368 - The 27-year-old has scored 368 goals for Barcelona in official matches and is well clear of the Catalan club's previous top scorer, Cesar Rodriguez. The former Spanish great hit 232 between 1942 and 1954. No player has scored so many goals for a Spanish side, with the previous best the 335 netted by Zarra for Athletic between 1940 and 1955. Raul is Madrid's top scorer with 323.