It is one of Jose Mourinho's stock sayings. "We will be a better team next season," is a phrase now very much associated with the Portuguese tactician, currently at his sixth club in a coaching career which has spanned just a decade. To the untrained eye, it can seem like an excuse. But it isn't. Mourinho's opening campaigns at a club have been excellent, too - it's just that the follow-up is usually even better.

MORE...
Since his early beginnings in short spells at Benfica and Uniao Leiria, Mourinho has amassed 18 major trophies at Porto, Chelsea, Inter and Real Madrid. And at the first three of those sides, there was improvement in the second year. Now, the Portuguese believes that the same pattern will repeat itself at the Santiago Bernabeu next term, as Real look to end a three-year period of almost complete dominance from fierce rivals Barcelona.

"I keep thinking and saying that it is a very, very young team, so I think the second season will be the great season for this Real Madrid team," the coach claimed recently. 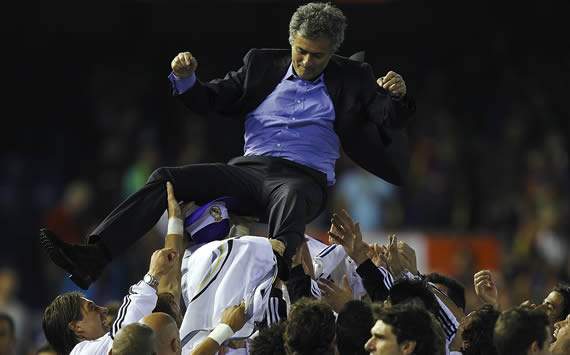 Youth is a part of it. Madrid do possess a developing side and this summer's signings have shown a desire to continue that trend. Recent recruits Fabio Coentrao (23), Raphael Varane (18), Nuri Sahin (22) and Jose Callejon (24) are all young and alongside players like Mesut Ozil (23), Angel Di Maria (22) and Marcelo (23), they represent the future of Madrid. "We are building a side for the next 10 years," Mourinho announced.

Familiarity with the coach's methods and between team-mates also tends to bring more success for the Portuguese following the first year in charge. Defender Ricardo Carvalho, who played under Mourinho at Porto and Chelsea before linking up with his countryman again at Madrid, commented: "With him you learn every day. His second years are better than his first because the players know each other better - it already happened at Porto and Chelsea."

At Porto (following a successful six-month stint in which he lifted the club to an improbable third-placed finish) Mourinho led his side to a treble of league, cup and Uefa Cup titles in his first full campaign - exactly the same feat achieved by Andre Villas-Boas at the Estadio Dragao last term. But while Villas-Boas moved to Chelsea, Mourinho stayed on and conquered Europe once more, this time at the highest possible level, winning the Champions League as well as another domestic title and a Portuguese Supercup. Six trophies in his two full campaigns, both of which were hugely impressive, although the latter will go down in history for making all of Europe sit up and pay attention.

“With him you learn every day. His second years are better than his first because the players know each other better - it already happened at Porto and Chelsea.”
- Ricardo Carvalho

Later, at Chelsea, the Champions League title was owner Roman Abramovich's big inspiration, but it remained elusive as the Londoners lost out twice to Liverpool in the semi-finals and once to Barcelona in the last 16. Mourinho picked up two trophies in each of his three full seasons, winning the Premier League title in each of the first two. Improvement here was perhaps more difficult to gauge, but the Portuguese's side appeared to be on the verge of greatness after claiming a second successive league title.

A breakdown in relations with Abramovich eventually saw Mourinho forced out shortly into a fourth year at Chelsea, however, and the coach moved to Inter the following summer. A Supercoppa title was quickly snapped up, along with the Serie A crown, but there was disappointment in Europe as the club went down to Manchester United 2-0 on aggregate in the last 16 of the Champions League. Many believed Italian sides were no longer able to compete at the highest level, but Mourinho vowed to improve, claiming his side would do better the following season. And he was right. An historic treble of Serie A, Coppa Italia and Champions League titles secured the club's best-ever return - and a first European Cup success in 45 years.


The move to Madrid (where Inter had won the Champions League against Bayern Munich) inevitably followed and Mourinho set about stopping the side often proclaimed as the best team in the history of football. It remains Mourinho's greatest challenge - and he hasn't quite managed it yet.

As in his first year at Chelsea (when he claimed a League Cup would be a platform for greater things), the Portuguese knew a trophy, any trophy, would be paramount. The 'Special One' placed huge importance on the capture of the Copa del Rey, believing it would restore confidence and serve as a foundation for future success. Madrid won it, edging out Barca in the final and although there were subsequent disappointments as the Catalans claimed the Primera Division and Champions League titles (eliminating Real in the European semi-final), it was a start.

“I came here to do a job and change the mentality of the club,” Mourinho said after the cup win in Valencia. “We have started to do that and it’s satisfying – but it’s just the start.”

Changes to playing personnel and staff are part of that, too, with former general manager Jorge Valdano moving on and Zinedine Zidane coming in as the club's sporting director. Mourinho, meanwhile, is assuming full control in more of a managerial role as he looks to change the club's mentality and recreate the success achieved at his previous sides in the second season. "I didn't win the Uefa Cup in my second season at Porto, nor did I earn the Champions League title in my second year at Inter, just by chance. It's normal for a team to be more solid in a second season," he said.

Madrid fans will be hoping that history repeats itself.