Italy can be as frustrating as it is enlightening. There is so much bureaucracy, its judicial system so convoluted, that the pursuit of justice is an always lengthy and often futile process. Nothing gets done quickly here. Sometimes, nothing gets done at all. The faint hope is that the case of Senad Lulic versus Anthony Rudiger will be different.

However, it is already disheartening that while the situation concerning Kevin Strootman and the touchline brawl he sparked in last weekend's Rome derby has already been dealt with, Lulic is still awating judgement over the race row he sparked after the same game.

Giallorossi director Mauro Baldissoni shamefully - yet unsurprisingly, given the conspiratorial climate of Italian football - suggested that there was a hidden agenda, given the two-game ban meant that one of the capital club's most influential players would miss matches against the sides immediately below and above them in the Serie A standings, third-placed AC Milan, on Monday, and leaders Juventus, on December 17.

Roma's rage was exacerbated by the fact that no such disciplinary action had been taken against Lulic, who had been guilty of the most glaring use of racism in a post-match interview with Mediaset Premium . "Rudiger was provoking us even before the game," the Bosnian complained. "Two years ago, he was there in Stuttgart, selling socks and belts, and now he acts like he's a phenomenon." 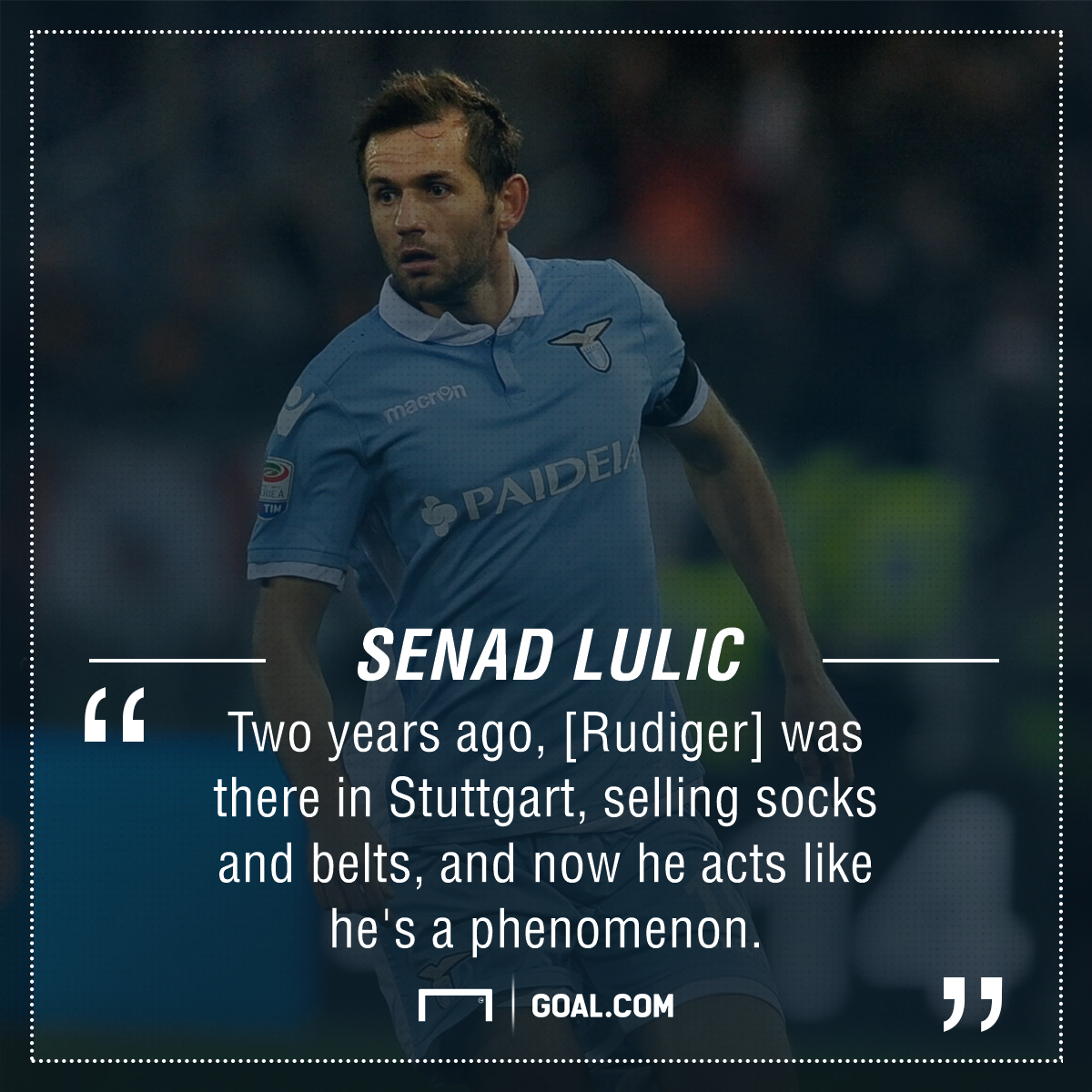 Lulic's comments immediately caused controversy yet when he was pressed to explain himself in an interview with another media outlet minutes afterwards, he was unrepentant. "Apologise to Rudiger? White people also sell socks," he reasoned.

When the (undoubtedly forced) apology finally came, it was hard to know what was more offensive: the original outburst or the attempt to partly blame Rudiger.

"With a cool head, I realise that I’ve responded to a provocation with another provocation," Lulic wrote on his Instagram account.

"I come from a country that knows about tragedies caused by ethnic prejudices. For that, I’m sorry that I got caught up in the tension of the derby as I expressed myself in an unfortunate way."

Apparently, 'unfortunate' is now another word for 'racist'. Anger is no excuse for using such language. You either use racist language or you don't. The context is irrelevant.

Ron Atkinson recently claimed that he was tired of apologising for saying Marcel Desailly "is what is known in some schools as a f**king lazy, thick n****r." Most right-thinking individuals are just tired of hearing his worthless apologies. They mean nothing because he still believes that he did nothing wrong.

At least Lulic acknowledged he was in the wrong - but why? Solely because he "got caught up in the tension of the derby"? Make no mistake about it: he knew exactly what he was saying.

In Italy, as in many other European countries, street-traders of African descent are treated with contempt. They are derogatorily referred to as ' Vu cumprà ', which mocks the way in which they are perceived to improperly pronounce the term ' Vuoi comprare ?' ('Do you want to buy?').

Lulic's comments were just an extension of that prejudice. He was upset by a man of colour and, in his petulance and ignorance, referred to him as offensively as he could by employing a lazy, ethnic and racist stereotype.

Worse still, he should have known better. As he himself pointed out, he was a victim of racism during and after the game, with Roma fans having subjected him to the same prejudice by labelling him a 'zingaro ' (gypsy). That only makes his outburst all the more inexplicably ignorant. He replied to prejudice with prejudice, merely underlining that hate simply breeds hate.

That the Italian Football Federation (FIGC) decided against charging Lulic with racism, as they could have done under Article 11 of their rule book, was shocking but not in the least bit surprising. This, after all, is an organisation helmed by Carlo Tavecchio, a man who infamously referred to the average African youth player learning his trade in Italy as "Opti Poba, who previously ate bananas and then suddenly becomes a first-team player with Lazio." 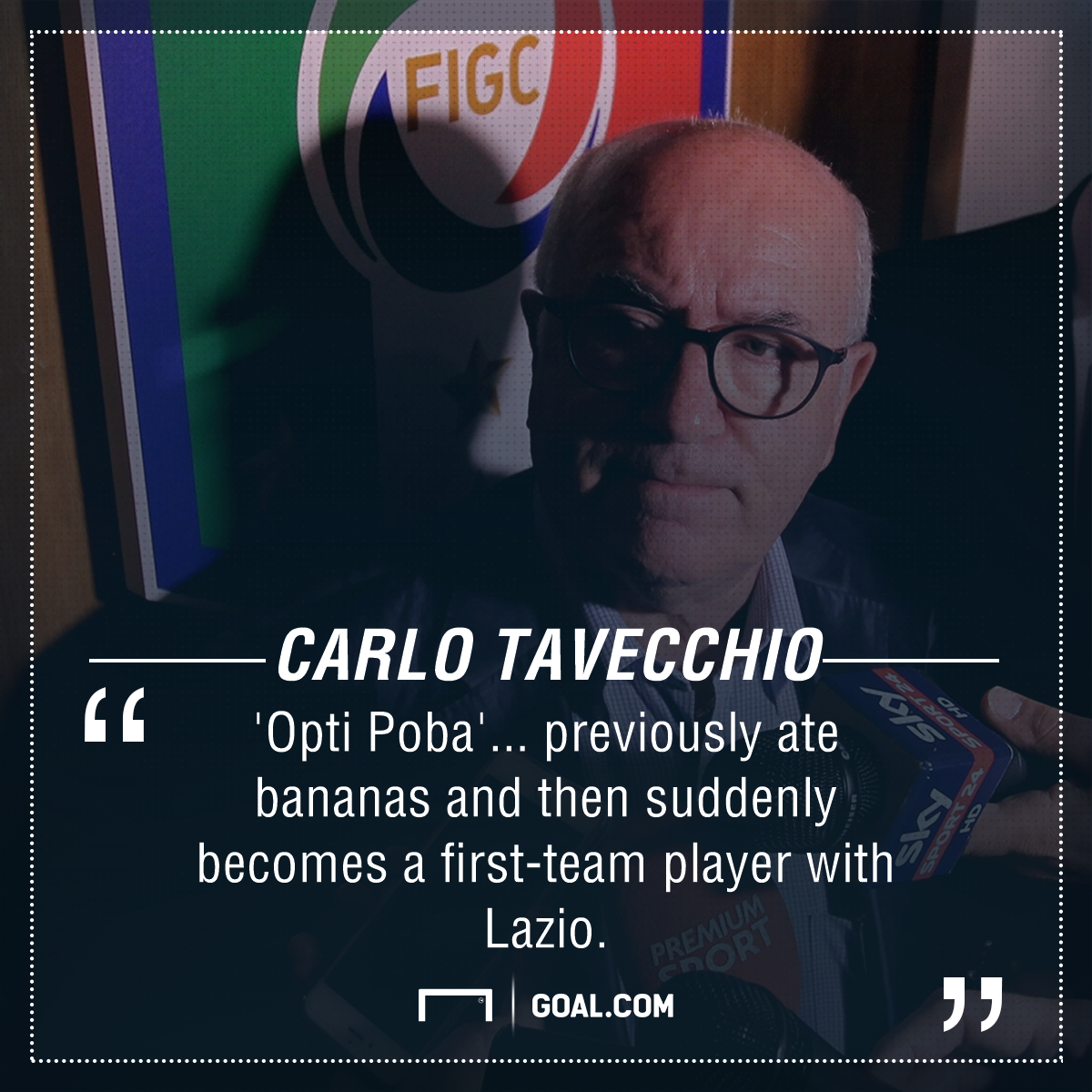 The FIGC's federal prosecutor has opened an investigation into Lulic's comments but there are already reports that the player will be charged with unsporting conduct rather than making discriminatory or racist remarks, the difference between a two-to-three game ban and a 10-match suspension.

The mind boggles, and the heart sinks. Again.

In apologising on behalf of Lulic and Lazio, the club's communications manager Arturo Diaconale told SportItalia : "We all need common sense and to not blow this up." Yet that is exactly what needs to happen. This is a debate that needs more exposure. These are voices that should not be silenced. That is what has happened far too often in the past. That is why we are in this position once again.

Indeed, this is not even the first time that Rudiger has been the victim of such abuse. Only last year, former AC Milan winger Stefano Eranio used the centre-half in his argument that black players are prone to errors caused by lapses in concentration.

Obviously racism is a societal problem. However, those that run football must start demonstrating that it will not be tolerated within the game by taking the issue seriously and dishing out adequate punishments and deterrents. That means to the players, the clubs, the supporters and the media.

As Radja Nainggolan stated: "No to racism: Certain people need to learn the meaning of these three words." The authorities most of all.