Bosnian keen on Serie A move
EXCLUSIVE
By Carlo Garganese

Wolfsburg star Edin Dzeko has given Juventus 48 hours to make him an official offer, or else he will complete his move to Manchester City, Goal.com International can reveal.

The Bosnian has been the centre of intense media speculation over the past few weeks, and it is believed that only personal terms separate the hitman from finalising his transfer to Eastlands.

The Italian media has long since claimed that Dzeko would prefer a move to Serie A in order to join long-term admirers Juventus, who were very close to signing him last summer before they instead used up their one non-EU berth on CSKA Moscow’s Milos Krasic. The Old Lady did obtain an option on Dzeko, though, as part of the deal that saw Brazilian playmaker Diego move to Wolfsburg for a cut-price fee of €15.5 million (£13.2m).

Goal.com International has now learned that Dzeko – who due to Serie A EU rules cannot join Juventus until the summer – is desperate to move to the club at the end of the current campaign and has handed them a 48-hour ultimatum to present an official offer.

If this is not forthcoming, then Dzeko will instead complete his transfer to Manchester City, most likely on Thursday, for a fee in the region of €32m (£27.4m). City and Wolfsburg have already agreed upon a transfer fee, but the Bosnian has yet to give the green light as he clings onto hope of Juve.

A source close to the player told Goal.com: "Dzeko has made it clear many times that Serie A is his favourite league and that he wants Juventus.

"However, he cannot wait around forever. We are talking about one of the best forwards in the world and Edin must think as a professional too.

"He cannot wait any longer than 48 hours. It is in Juve's hands, but they are running out of time." 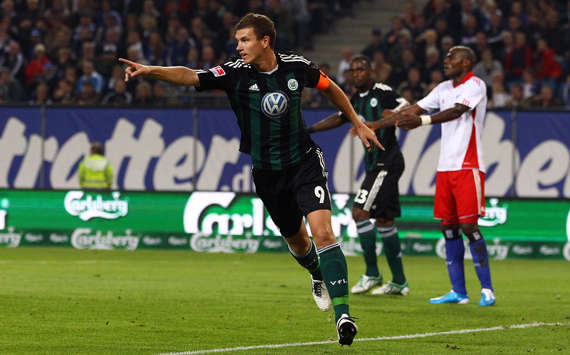 Pointing the way | But where will Dzeko go

Dzeko’s heart is almost certainly not with Wolfsburg anymore. Goal.com Germany reports that at the club’s mid-season training camp in Marbella on Monday, the 24-year-old’s body language was very poor and he did not speak to any of his team-mates. Dzeko also refused any interviews after the session ended.

Manchester City manager Roberto Mancini confirmed in his pre-Arsenal match press conference that a fee with Wolfsburg has been settled.

"For Dzeko, I can say only one piece, that we have agreed with Wolfsburg, but we'll speak after Arsenal," he stated.

"I think Dzeko is a good player, all teams in Europe want him."