England Under-21s beat Romania 2-1 in the first leg of their European Championships play-off in front of the watching Fabio Capello on Friday night.

The Italian manager made the rare trip to a packed Carrow Road to assess who from England's current crop of rising stars could be next to graduate into the senior side.

He saw Jordan Henderson cap a fine individual display with a superb volley from the edge of the area and Chris Smalling give England the advantage ahead of Tuesday's second leg when he prodded home from close range.

The youngsters in Stuart Pearce's side laboured to victory but there were still some assured performances that the England manager would have noted, not least that of Jack Wilshere, the 18-year-old Arsenal midfielder who played his part in this game and now links up with the full England squad for Tuesday's Euro 2012 qualifier against Montenegro at Wembley.

Newcastle striker Andy Carroll, 21, appears the next most likely of England's youngsters to be called up by Capello, although he was strangely omitted from both squads on this occasion.

But with the senior squad ageing and the likes of 33-year-old Kevin Davies being called up, any one of the Under-21s will be encouraged to feel that the door is open for him.

Here, Goal.com UK takes a look at the players who put forward their case against Romania and could be part of the England World Cup squad in 2014... 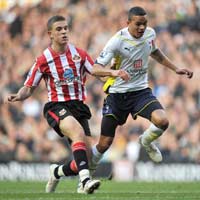 The central midfielder shone as England toiled in their efforts to break down the well organised wall of yellow Romania shirts.

He strikes the ball as sweetly as any player in the set-up and he demonstrated that with a well struck early volley and two other testing efforts from long range before his goal.

The opening goal demonstrated his impeccable technique. He had an age to watch the ball fall from the sky but struck a crisp volley, under pressure, low and hard into the bottom corner.

It was an exemplary performance from the Sunderland man, who continued his impressive start to the season for his club, always looking to make something happen, playing with his head up and playing accurate short and long passes.

“Henderson is an outstanding player,” said Pearce after the match. “When you see him every day in training, you can see he's got excellent quality and the goal he scored could grace any stadium.” 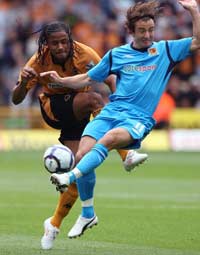 The defender was handed the captain's armband by Stuart Pearce and delivered a display at right-back that would have caught Capello's eye.

Mancienne has been forced into successive loan moves away from Chelsea in order to keep developing and build on the natural talent that saw him hailed in the corridors of Stamford Bridge as the future of the club only a few years ago.

At Wolves he has been playing primarily in a defensive midfield or centre-back role, but deployed at right-back by Pearce he showed the defensive awareness to be considered for the position in future squads.

He is a superb athlete, and showed his pace and agility as he dealt with Romania's tricky left winger with aplomb. Mancienne may have a similar hairstyle to that of Glen Johnson, England's first choice right-back, but on this display he doesn't share the Liverpool defender's tendency to have  lapses in concentration.

Mancienne will need to improve his attacking skills from right-back, but with the dearth of talent in that position at Capello's disposal, he has a chance. The Blackburn defender is one of the rookies in the England Under-21 squad but played with an authority and natural leadership well beyond his 18 years.

Jones has been hyped up for a while now and Blackburn manager Sam Allardyce will be glad he has just signed a five-year contract at Ewood Park.

Most striking in Jones' performance against Romania was his determination to take responsibility and to conduct the defence. He is a natural, 'old school' centre-half and it is no surprise that both his gait and style of play have drawn comparisons with Chelsea captain John Terry.

He won countless aerial battles and was always prepared to throw his head at crosses into the box, but he will know he needs to improve defensively when turned towards his own goal.

Jones is another player who has been playing out of his favoured position so far this season, in a defensive midfield role, but that could only help him increase his awareness of the game and his ball skills before he drops back and plays as a central defender every week. 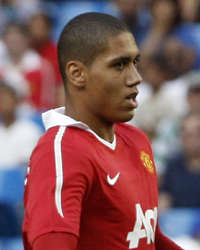 The defender who a little over two years ago was playing for lowly Maidstone United is now a £7 million signing for Manchester United and scoring match-winning goals in front of packed houses.

Smalling's winning strike showed his attacking threat but it was his defending that caught the eye as he made countless interceptions and stayed tight to the Romanian strikers.

The question over Smalling is whether he can cut out lapses in concentration like the one that let Marius Alexe run through on goal, but he has Sir Alex Ferguson's confidence and will be given time to develop at Manchester United.

His raw pace and ability to read the game will draw comparisons with United team-mate Rio Ferdinand but Smalling needs to be playing regularly and has only featured three times so far this season. 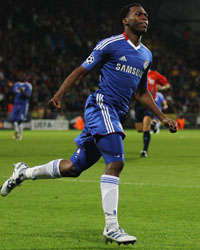 The former Manchester City striker replaced Danny Welbeck as a second-half substitute but in his short time on the field offered far more of a threat than the Sunderland forward.

Sturridge looked sharp as he ran at the Romanian defenders and slipped in passes for wingers Danny Rose and Marc Albrighton, launching counter-attacks before getting into the box to try and finish off the moves.

He created the winning goal for Smalling by heading the ball back into the danger area and nearly scored himself but could not quite reposition his body to redirect the ball into the net from Albrighton's cross.

Sturridge clearly has the talent, that is why Chelsea were so desperate to snatch him from Manchester City last summer, but the problem he has playing for the Premier League champions is a lack of first-team opportunities.

He has made six appearances for Carlo Ancelotti's side so far this season and has been pushing for a starting spot, but he needs to score more goals and up his workrate to counter accusations that he can be lazy. Ancelotti believes Sturridge has 'fantastic' ability and movement but last month said the 20-year-old can do better and needs to showcase his skills more often.