Goal.com salutes a true icon of Brazilian football who formed part of one of the most electrifying teams ever to play the game and who sadly passed away on Sunday at 57 years old
OBITUARY
By Andre Baibich | Goal.com Brasil

There are players who leave their mark on football solely for what they do on the field. This is not the case with Socrates.

On December 4, we said goodbye to one of the most distinctive, and possibly most politically active, figures in the history of Brazilian sport.

Socrates became a household name in all four corners of the globe during the 1982 World Cup when he captained a swash-buckling Brazil side - a team commonly regarded as one of the best not to win the showpiece.

His languid playing style and graceful stride became as synonymous with Socrates the footballer as his handsome looks, beard, curly hair and headband would represent the icon he became.

Socrates may have left us enchanted by his trademark touches and skills, but he also inspired off the pitch with his courageous integrity to be a shepherd and not a sheep. With the passing of Socrates, we lose a true maverick of the beautiful game, a type of figure we see less and less in the modern game.

Socrates' journey in football began in Riberao Preto, where he grew up and began to make waves at Botafogo-SP. The star's very name was already proof that he was different from the average player; the son of a father who greatly admired the ancient Greek philosophers, he was baptised in homage to the famous thinker, while two of his brothers carry the monikers Sophocles and Sosthenes. His behaviour was also a little out of the ordinary, as at times he missed training sessions to continue his studies as a doctor.

His most notable year in the little Botafogo outfit came in 1977, when he led the team to win the first half of the Campeonato Paulista and finished as the competition's top scorer. At that point his elegance on the ball and ability to direct play, always with his head held high, was already clear as day. The back-heel, which became his signature move, was also abundant at an early age. 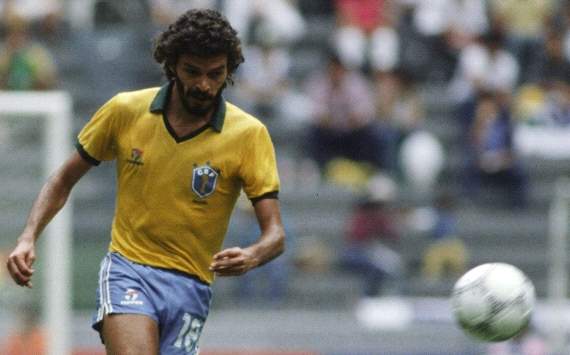 Captain and icon | Socrates embodied the artistry of Brazilian football

One year later, in 1978, he was transferred to Corinthians; the club which would make him a star. Alongside great names like Casagrande and Palhinha, a team was formed around him which would peak in the 1980s. However, that team, despite their strength, did not stand out for the titles won but for the political vision they represented.

In 1982 a great revolution began in Parque Sao Jorge, led by the 'Doctor'. In that time, sociologist Adilson Monteiro Alves was director of football at Corinthians, which opened the door to completely transform the way that the club was organised and directed. Under the leadership of the always-articulate Socrates, Corinthians came to adopt a democratic system. Players and directors had an equal vote to make decisions which would affect the team on the field, and the Corinthian Democracy was born.


During this period Brazil was under a military dictatorship; democracy did not figure in the governing of the nation. The Corinthians team, therefore, gave the country's people a rare example of how a democratic system could function.

The democratic experience was a key part of the two consecutive Paulista titles won in 1982 and 1983. The team shocked the nation by entering the pitch with political messages on their shirts and supporting, later on, the 'Diretas Ja' movement, which almost restored direct elections for the presidency. Despite the quality of the squad and their revolutionary experiment, however, Corinthians could not win a national title that era.

Nevertheless their talisman Socrates, a man whose personal heroes had included revolutionary thinkers and dissenters such as John Lennon, Fidel Castro and Che Guevera, had become embraced in the hearts of a downtrodden nation.

1982 was without a doubt a special year for Socrates. Besides the installation of Corinthian Democracy, which stands out as a unique experience in the history of Brazilian football, 'The Doctor' was part of one of the most iconic teams ever to pull on the yellow jersey of the Selecao.

The 80s generation was one of the most talented in the history of our football. Socrates was one member of an unforgettable midfield next to Toninho Cerezo, Paulo Roberto Falcao and Zico. In the Spain World Cup, the world fell in love with Brazil's incredible football, with their precise, brilliant passing under the command of the maestro Tele Santana.


Socrates scored beautiful goals - against the Soviet Union and during the memorable 3-2 defeat to Italy, which ended the Selecao's spectacular tournament. Brazil may have exited Spain '82 before the semi-finals but Socrates, and his magnificent team-mates, would never be forgotten and are regarded by some as the greatest outfit never to win the World Cup.

That same generation went to Mexico for the 1986 edition. Socrates was no longer the same player though, and neither were many of his team-mates. The 'Doctor' missed one of the penalties in the legendary shoot-out against France, which eliminated Brazil again in the quarters. It was the last time he would wear the yellow shirt, ending his international career on 60 caps and an impressive 22 goals.

The end of the line

The last five years of Socrates' career did not have the same shine as those which marked his ascendancy. In 1984 he received an offer from Fiorentina and entered Italian football, his first and only experience of the game across the Atlantic Ocean.

Barely having arrived in Florence, Socrates had problems getting along with other players; some went as far to say that he suspected that his team-mates were fixing matches. The return to Brazil would not take long. He would go on to wear the jersey of both Flamengo and Santos, but the brilliant performances of before would not be repeated. He retired from football in 1989, at 35 years old. He would take to the pitch once more in an unlikely place. In 2004, a 50 year-old Socrates made a 12 minute substitute appearance for  tiny Garforth Town in England after he agreed a one-month player coaching deal with the Northern Counties East League club. The cameo drew more than a thousand spectators, proving that the public fascination for the 1982 star had not dimmed.

His life after football was marked by the same contrary attitude that characterised him on the pitch. Away from the turf he became a biting, demanding analyst of the game, always uncomfortable with tactical rigidity and the lack of creativity in modern football – not to mention his regular outbursts against national politics.

Socrates was a footballer and a political activist, but he was no athlete - he always referred to himself as an artist. The lifestyle he pursued certainly reflected this. His heavy drinking and chain smoking were a feature of his life - even during the peak of his career – but as he grew older those vices were to prove his downfall.

Evidently the excesses began to have a negative effect on the 'Doctor's' body, and 2011 was the year when those problems would take their toll. Just when Socrates was fighting to stay away from the drink, those many years of alcohol abuse finally did the damage on his liver. The complications from this have cut his journey short, the journey of one of the most outstanding, iconic footballers in our history.