Inter are one step closer to winning the Serie A title after defeating Chievo Verona in a 4-3 thriller at the San Siro, but the Scudetto race will go to the last day.

At one point Inter had a 4-1 lead, but the Flying Donkeys gave them a scare by pulling it back to one in the second-half.

Coach Jose Mourinho had to do without key players in Wesley Sneijder and Lucio, while starlet Mario Balotelli and Marco Materazzi were in the starting XI. Mimmo Di Carlo dealt with the absence of veteran Mario Yepes at the back, who failed a late fitness test.

The hosts nearly opened the scoring after just four minutes, as Dejan Stankovic's long-range drive dipped onto the top of the crossbar and out of play.

The Nerazzurri's early dominance did not pay off and Chievo surprisingly took the lead after a set-play was floated into the area. Thiago Motta and Francesco Scardina battled and the ball appeared to come off the former Barcelona player and bobble past Julio Cesar for an own goal.

It only took Inter one minute to equalise, also with an own goal. Samuel Eto'o showed great control to keep the ball between two defenders before volleying in a cross, that deflected off the heel of Andrea Montovani and flew into the net. It was 1-1 within a quarter of an hour.

The marauding Maicon was causing problems for the visitors down the right, as he linked up with Thiago Motta in a quick one-two, but his header was not powerful enough to reach Balotelli making a run in the area. Chievo attempted to play on the counter-attack and Pablo Granoche's header did not trouble the goalkeeper.

Stankovic was once again dangerous from outside the area on 30 minutes, firing in a powerful shot from a central position that stung the palms of Stefano Sorrentino.

It was a sign of things to come, the Nerazzurri were lightning quick coming forward in numbers and Maicon's cross found Esteban Cambiasso at the far post and he expertly tapped into the net.

There was no stopping the home side as Diego Milito scored one of the goals of the season. Eto'o spotted the run of the Argentine, who faked a shot before cheekily chipping over the goalkeeper for their third goal with five minutes remaining before half-time. 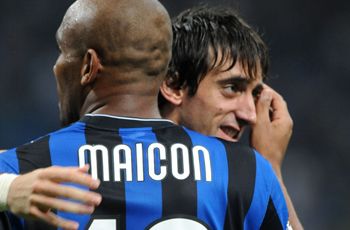 On target | Milito celebrates his goal with Maicon

Di Carlo made an attacking change at the start of the second-half with Simone Bentivoglio replacing Luca Rigoni in midfield in a bid to get back into the match.

However, it was soon 4-1. Maicon launched an inch-perfect long ball for Balotelli, who touched it past the onrushing shot stopper for an easy goal and the Nerazzurri were in cruise control. Mourinho then threw on Sulley Muntari to add extra muscle in midfield.

Chievo pulled a goal back with an hour gone. Michele Marcolini's effort from outside the box was intelligently deflected in by Granoche, making the score 4-2.

Goran Pandev made his comeback from injury as a substitute, taking over for 'Super Mario.' He was involved in the action immediately, defender Gennaro Sardo was shown a yellow card for a crunching tackle from behind on the Macedonian as 20 minutes remained on the clock.

Amazingly, it was soon 4-3. A misplaced pass across the backline was intercepted by Sergio Pellissier, who raced in to score with a clinical finish to create a tense ending to the match.

Captain Javier Zanetti almost gave the Nerazzurri a two-goal cushion with a trademark run through three defenders, but his near post effort was blocked by Sorrentino. Eto'o then found space in the box and Pandev cracked the rebound off the post with the goal gaping as Mou's men continued to press.

That was all the action, but combined with Roma's win over Cagliari the Scudetto will not be decided until the final round, when the Nerazzurri are away to relegated Siena.