Bjorn Kuipers awarded a spot-kick for an infraction that's rarely penalised. Thus, both teams and fans missed out on what could have been a thrilling finale to a thrilling tie
COMMENT
By Clark Whitney

Watch a football game, any game, and you will see fouls that are not given. In every league, there are unwritten rules: it generally is accepted that even the slightest touch of a goalkeeper results in a free-kick to the defending team. But not just any touch to an attacking player in the penalty box results in a spot-kick: it always requires a little more of an infraction to make such a game-changing call.

But on Tuesday night, referee Bjorn Kuipers deviated from the code by which footballers play every week as he awarded a highly controversial penalty to Barcelona in their Champions League semi-finals second-leg clash with Milan. The infraction? Shirt-pulling on the part of Alessandro Nesta upon Sergio Busquets as a corner-kick was delivered.

The contact was nowhere near the ball, and it can be safely assumed that Busquets never had a chance of impacting the play. And at the same time, Carles Puyol stepped in front of Nesta, creating contact that easily could have resulted in a foul against the Barcelona man.

But whether Puyol was guilty of an infraction and whether Busquets had a chance to reach the ball in the first place are both irrelevant. Associated with this decision are some undeniable truths that football viewers across the world can agree upon. 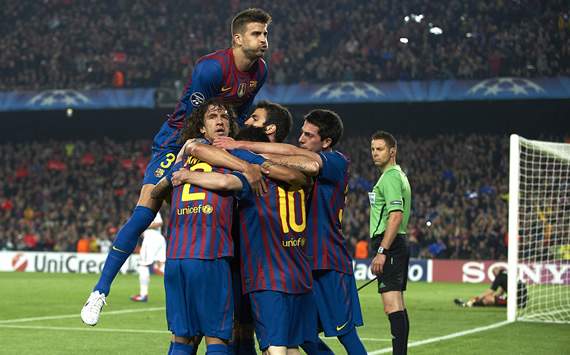 Firstly, shirt-pulling inside the penalty box happens with nearly every corner kick in every game. And in all of Europe's leagues, it is penalised perhaps a handful of times in a given season.

Secondly, shirt-pulling is, according to the rules of the game, a foul. In any area outside the penalty box, there would be little denial that an infraction like that of Nesta's upon Busquets would be worthy of a free-kick.

But finally, and most importantly, football fans around the world - regardless of team affiliation - can and must agree that equal application of the rules of the game must be enforced. Shirt-pulling is, according to the letter of the law, an offense punishable with a foul. But just as in civil law, the rules of football are guidelines that are only given meaning by the results of previous decisions. Based on the precedent of thousands upon thousands of corner-kicks delivered this campaign in which shirt-pulling took place but no penalty was given, Milan and their fans can feel victimised. The unfortunate truth in football is that referees are forced to make a verdict in an instant. And in football, there are no appeals over such calls.


There is a time and a place to make changes to the way rules are enforced. But that time and place is not the Champions League quarter-finals, especially in a match in which a single goal could decide a two-legged tie. Just minutes before half time, Milan were leading the tie on away goals at 1-1, and although Barcelona may still have been favourites with over 45 minutes to play, the penalty award and Lionel Messi's subsequent conversion (his second spot-kick of the game) was an unrecoverable blow that completely altered the momentum of the tie.

If Uefa wish to see a change in the application of the game's rules, the only appropriate and responsible way is to make a formal announcement before the season's start. The players deserve to know how they will be assessed.

Kuipers' decision casts a dark shadow upon the biggest football game of the week, and cheated both sides. Milan have every right to protest the decision. Zlatan Ibrahimovic roared: "The game is not about the man in green. It's a disgrace. I couldn't believe he called a penalty when the ball wasn't in play. It seems like Uefa want a certain two teams in the Champions League final. Now I understand how Mourinho feels every time he comes to Camp Nou."

Barcelona, meanwhile, will have an otherwise good performance marred by accusations of conspiracy and luck. Despite reaching a record five successive Champions League semi finals, all the post-match talk is about the penalty conceded by Nesta.

For fans, Kuipers' call was tragic across the board. Because whether pro-Milan, pro-Barca or neutral, the viewers were cheated out of what might have been a finale for the ages.