Join Goal.com for a quick briefing on Group A of the upcoming UEFA Champions League.

Here we'll bring you the lowdown on the teams involved.

European champions Inter will have no easing-in process as they look to defend their trophy after being drawn in arguably the second toughest of the Champions League groups alongside Werder Bremen, Tottenham and Twente. Only Group G featuring Inter’s city cousins Milan, Real Madrid, Ajax and Auxerre will be harder to escape from. 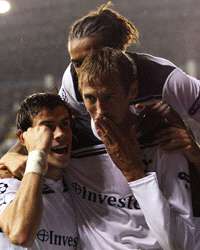 Nevertheless, the Nerazzurri remain firm favourites to progress to the knockouts and the battle in Group A will likely be for second place between the three other qualifiers. Having roared to glory in 2010 at the Santiago Bernabeu, Inter clean-sweeped all the individual awards at the draw today with Julio Cesar being named Best Goalkeeper, Maicon Best Defender, Wesley Sneijder Best Midfielder and Diego Milito Best Forward. The Italians will have their eyes firmly on Wembley next May.

Werder Bremen have enough firepower offensively through the likes of Claudio Pizzaro, Marko Marin and Aaron Hunt to score a lot of goals, but weaknesses in defence means they will always concede goals. Die Grün-Weißen were seconds away from elimination in the playoff against Sampdoria, until an injury time goal from Markus Rosenberg forced extra time where they won through. Werder have a superb record against Italian sides in recent seasons, having also beaten the likes of Juventus, Milan, Udinese and Inter in single matches or ties.

Tottenham enter the top level of European competition for only the second time, and the first in almost 50 years when they lost in the semi-final to eventual winners Benfica in 1961-62. Spurs only qualified for the groups after recovering from 3-0 down within half an hour of their playoff to defeat Young Boys 6-3 on aggregate. Harry Redknapp possesses a solid squad, certainly strong enough to challenge for qualification, but a lack of real top-class quality and experience at this level may count against them.

Dutch champions Twente are the outsiders in the pool, and would probably settle for third place and a passage into the Europa League. The Reds have lost a number of key players from last season such as Miroslav Stoch, Blaise N'Kufo, Kenneth Perez and Ronnie Stam, holes they may struggle to fill. But their two most important stars, Bryan Ruiz and Douglas, remained and with the arrival of Marc Janko they will be hopeful of rumbling the pack.