By Graham Lister
The cloud that had descended on Merseyside following the deaths of 96 football fans was temporarily lifted when the city's two teams met at Wembley in 1989. Goal.com remembers...

Saturday’s FA Cup semi-final between Everton and Liverpool has a special resonance on Merseyside beyond the obvious footballing ambitions of two sets of players and supporters striving to book a return to the national stadium for the competition’s showpiece on May 5.

The match will stir powerful emotions and evoke poignant memories of the last time these two neighbours met at Wembley. That was in 1989, when the teams lined up in the final of the same competition 35 days after the Hillsborough disaster that cost 96 Liverpool fans their lives.

It is the 23rd anniversary of the disaster this weekend, and the Anfield club – who received FA dispensation not to play on April 15 - will face the Toffees on Saturday April 14 and hold their annual memorial service the following afternoon. Many Everton fans will attend the service, for the events of 1989 united the people of Liverpool, both red and blue, in grief and respect; the links forged as the city closed ranks still endure.

The man that lead Liverpool out at Wembley that day, Kenny Dalglish, is the man tasked with the very same job again on Saturday, and the Scot will never forget the personal cost and the rippled impact that it had on the lives of all involved.

"I didn’t understand how the relatives had the fortitude to keep going, but they did. Resilience defined Liverpool, still does. A great community spirit united the city in the aftermath of the Hillsborough tragedy," Dalglish stated in his own autobiography.

On the day of the game, the atmosphere was unique, the emotion raw and tangible when Liverpool captain Ronnie Whelan and his Everton counterpart Kevin Ratcliffe led their respective teams out at the old Wembley Stadium on May 20 1989.

Some argued the FA Cup should have been abandoned altogether that season after the tragedy which unfolded in Sheffield six minutes into Liverpool’s semi-final with Nottingham Forest. Others suggested the Cup be presented to Liverpool in recognition of their loss.

But led by the exemplary conduct of Dalglish – their manager then, as now – winning the trophy on the pitch as a tribute to the Hillsborough victims became a mission for the Liverpool players, who had been selflessly supportive of a community in mourning.

Evertonians had also reacted with dignity, compassion and genuine support, so it was at once fitting and fateful that their club should be Liverpool’s Wembley opponents after the Reds' re-staged semi with Forest was eventually decided.

Everton’s celebration of their own semi-final victory over Norwich had been abruptly terminated by the dreadful news filtering through to Villa Park from Hillsborough, and the Toffees knew they would be on a hiding to nothing in the final, where public sympathy would be solidly behind Liverpool. 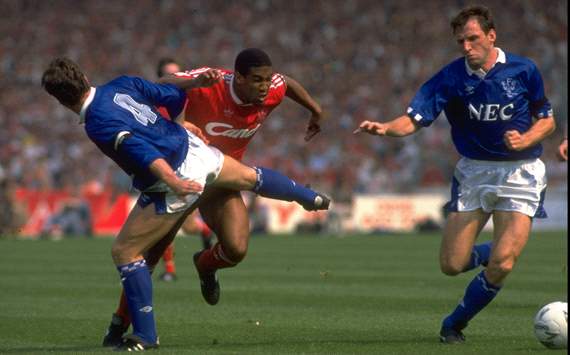 But they played their part in a thrilling and dramatic affair that kicked off on the hottest afternoon of the year to date, after the city’s own Gerry Marsden had led the crowd in the pre-match singing of his hit 'You’ll Never Walk Alone'.

A frenetic opening saw newly-crowned Footballer of the Year Steve Nicol free Steve McMahon on the right, and the ex-Evertonian’s low cross was met by Scouser John Aldridge, out-pacing the Toffees’ defence to sweep the ball first-time into the top left-hand corner of Neville Southall’s net. The final was a mere four minutes old.

Liverpool, who were chasing a League and Cup double, were rampant, reflecting a domination of English football in the 1980s that only Everton had seriously challenged. It took Southall’s heroics and some profligate Reds’ shooting to keep the Toffees in touch.

However, Everton manager Colin Harvey sent on Stuart McCall for Paul Bracewell just before the hour mark, and the substitution was inspired. McCall imposed himself on midfield and wrested some of the initiative away from Liverpool. Dalglish responded by replacing Aldridge with Ian Rush – who had endured a testing season since returning from Italy – in the 73rd minute.

The game had reached the last minute of normal time when ex-Red Dave Watson’s effort was parried by keeper Bruce Grobbelaar and fell to McCall, who slid the ball into the net at the far post to force extra-time.

With impressive stamina, Liverpool seized control again and in the 96th minute regained the lead when Nicol’s left-wing cross found Rush in the area. The Welsh striker had his back to goal and was closely marked, but his neat dummy was bought by Ratcliffe, giving him just enough space to lash a rising shot beyond Southall. The goal broke Everton legend Dixie Dean’s scoring record in Merseyside derbies.

Yet Everton were not about to surrender. Six minutes later Ratcliffe’s free-kick was headed out by Alan Hansen, but only as far as McCall, who cushioned the ball on his chest before volleying it venomously past Grobbelaar from 20 yards. The Scotland international thus became the only substitute to score twice in an FA Cup final – until Rush matched him within three minutes, stooping to head home a beautifully angled John Barnes centre. Liverpool had at last secured the trophy. 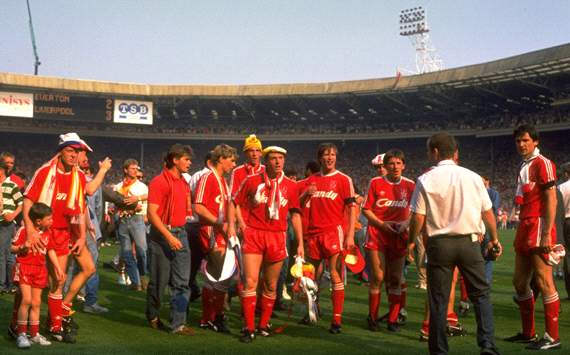 The mixture of relief and elation encapsulated in Dalglish’s smile at the final whistle spoke volumes. His stock at Anfield – already sky-high for his exploits as a sublimely gifted striker and then as a double-winning player-manager – had soared further in the aftermath of Hillsborough when his humanity and leadership came to the fore, confounding many beyond Merseyside who had assumed from his TV persona that he was surly and aloof.

He would be left deflated six days later when Arsenal dramatically denied Liverpool another double; and in March 1991, despite another League title, the strain that stemmed from Hillsborough finally told when he stunned football by announcing his retirement from the game. Although he was back as Blackburn’s manager within six months – leading them to the Premier League title in 1995 – history confirms that Liverpool’s era of title-winning dominance ended when he left the Anfield hot-seat.

His near-messianic return in January 2011 launched a wave of hope among Reds fans but, notwithstanding February’s League Cup triumph on penalties over Cardiff, those hopes are as yet unfulfilled, certainly in Premier League terms.

Meanwhile Everton’s glorious purple patch under Howard Kendall from 1984 to 1987 is a distant memory, the Toffees having come seriously unstuck financially in recent years, their straitened circumstances putting a handbrake on the ambitions of their resourceful and talented manager David Moyes.

Contrasting fortunes in 2012 have seen Everton leapfrog Liverpool in the league, but with the two rivals from either side of Stanley Park currently seventh and eighth, the title an exclusively Mancunian affair and the tussle for the other Champions League places being largely fought out in London, the relative decline of Merseyside’s influence is apparent.

That’s one reason why Saturday’s Scouse showdown at Wembley is so welcome for the city of Liverpool: it is a chance for their two teams to reoccupy the national stage and remind the country of their footballing heritage.

The other reason has everything to do with a united city’s collective memory, actual or inherited, of 1989: the April date, the Wembley setting, the tournament, the togetherness…

Liverpool will happily settle for a repeat of that 3-2 scoreline from 23 years ago; Evertonians feel they could well edge it this time. But whatever the outcome, Hillsborough and its aftermath will inevitably loom large in many fans’ minds.