For fans of Championship promotion hopefuls Leeds United, Saturday’s FA Cup third round tie against Arsenal offers a welcome return to the national spotlight, but it will also stir memories of past battles between the Yorkshire Whites and the Gunners.

MORE...
Indeed, 40 years ago Bertie Mee’s Arsenal and Don Revie’s Leeds were the two major heavyweights in English football, and by the late 1990s, George Graham, back in management at Elland Road, and then another ex-Gunner, David O’Leary, gave the rivalry with Arsenal, now under the stewardship of Arsene Wenger, a new dimension.

Leeds financial implosion saw them tumble out of the Premier League in 2003-04 as Arsenal were completing their ‘Invincible’ season; but Simon Grayson's side, currently fifth in the Championship, are on their way back.

Saturday’s cup clash will be the first meeting between the clubs since April 2004, and Goal.com UK recalls 10 of their great battles of the past, in chronological order.

Since his appointment in 1961, Revie had steered Leeds from the brink of relegation from the old Second Division to the top echelons of the First, which they would win for the first time just one year after lifting the first major trophy in their history - the 1968 League Cup- with a combination of sublime skill and ruthless steel. It was devastatingly effective.

Meanwhile Bertie Mee had shaken Arsenal - trophyless since 1953 - out of their lethargy and was building a solid platform for success. And the Gunners were no shrinking violets either, so it was no surprise that their collision in the League Cup final was a dour, tetchy affair.

It was decided in typically controversial fashion too - Jack Charlton appeared to impede Arsenal 'keeper Jim Furnell at a set-piece and the loose ball fell to Terry Cooper, who lashed it home.

By the turn of the decade Leeds were unquestionably the best team in England, but their abilities were not fully reflected in silverware: they were too often prone to missing the big prizes at the final hurdle. In February 1971 they were well clear of second-placed Arsenal in the title race, but the Gunners put together an impressive run of relentless victories, and by the time the two met at Elland Road at the end of April, Arsenal were top with 61 points from 39 matches; Leeds were second with 60 from 40. (At this time a win was still only worth two points). 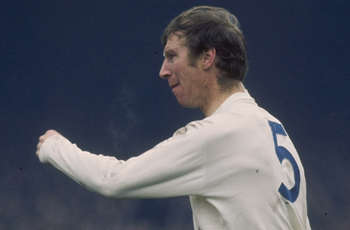 Leeds had to win to keep their title hopes alive; a draw would have suited Arsenal, and for much of the contest looked the likeliest outcome. But in the dying moments, Paul Madeley launched an attack, Bremner provided an assist and Jack Charlton (right) found himself alone in front of Bob Wilson's goal. As Arsenal's defenders froze, arms aloft appealing for offside, Charlton knocked the ball against the post, then reached the rebound before Bob McNab to prod it home.

Arsenal reacted with indignant fury, arguing the legitimacy of the goal with referee Norman Burtenshaw. He rejected their protests and Leeds had won. Both teams won their next matches; but Arsenal had a precious game in hand. The mathematics of the goal average system then in force meant a goalless draw would clinch the title for Arsenal, but any scoring draw would leave Leeds as champions. In the event Arsenal won 1-0 at arch-rivals Tottenham (who finished third) to win the title by a point, before clinching an historic Double.

Revenge was not long in coming for Leeds. A year later the teams met in the Centenary FA Cup final. Arsenal were the holders; Leeds were seeking their first triumph in the competition, having been beaten finalists in 1965 and 1970. They also needed just one point from their remaining League match, scheduled for the Monday after the cup final, to emulate Arsenal's feat of the previous season and win the Double.

The Wembley showpiece was a tense, tentative affair with each side showing the other too much respect. But it was settled in Leeds' favour with a flash of genuine quality. Eight minutes into the second half Mick Jones out-foxed Bob McNab on the right and drove in a cross which Allan Clarke met with a stooping header that gave stand-in Arsenal 'keeper Geoff Barnett no chance. The unlucky Jones dislocated his elbow in the closing minutes and missed Monday's League clash at Wolves. Leeds lost 2-1, missing the title by a point for the second year running as Brian Clough’s Derby County were crowned champions.

Leeds were still a major power after the Revie era, and after Jimmy Armfield's highly respectable four-year reign ended, the legendary Jock Stein was appointed manager. His first game in charge was at Highbury against Terry Neill's Gunners.

Each side boasted a gifted playmaker: mercurial Irishman Liam Brady was the king of Highbury, while filling the role vacated by Johnny Giles in the Leeds team was Tony Currie, whose mix of flamboyance and commitment was idolised by the Leeds fans.

On the opening day of the 1978-79 season, on a sunlit, manicured pitch, the two artists took centre stage. After Brady curled home an unstoppable effort from 20 yards, Currie took the ball almost to the goal-line, shaped to cross then lashed it into the net from the tightest of angles. Even a packed North Bank felt obliged to applaud him. Honours eventually ended even on the day; Leeds finished fifth that season, while Arsenal finished seventh but won the FA Cup.

Arsenal's most sparkling display for several years gave them their best-ever League Cup win, and inflicted on Leeds their heaviest defeat in the competition. The result was spectacularly unexpected: a week earlier the sides had drawn the first leg 1-1 at Elland Road, and a First Division clash three days after that had also ended 1-1 in Yorkshire. But at home Arsenal meant business from the off. Brady, Graham Rix and Sammy Nelson were creatively mesmeric on the left; John Hollins was inspirational in midfield, while strikers Frank Stapleton and Alan Sunderland gave the visitors' defence a torrid time.

The following season Arsenal won 5-0 at Elland Road in a League game, underlining that the Leeds aura of invincibility had well and truly faded; they were relegated in 1982.

Wilkinson's team won the Second Division title in 1989-90 and immediately acclimatised in the upper reaches of the top-flight. But Arsenal under Graham, champions in 1989, were top of the table when they met Leeds. In fact the Gunners would lose only once in the league that season on their way to another title; but they found Leeds a stubborn obstacle en-route to the FA Cup semi-final.

A goalless draw at Highbury forced a replay at Elland Road in which one ex-Gunner, Chris Whyte, had a goal disallowed before another, Lee Chapman, headed Leeds in front. Almost immediately, however, Swedish winger Anders Limpar equalised with a memorable goal, cutting inside and wrong-footing two defenders before firing low past yet another former Arsenal man, goalkeeper John Lukic (who had two spells with both clubs).

A second replay at Highbury again ended goalless, before Arsernal won at the fourth attempt, defeating Leeds 2-1 away with goals from Paul Merson and Lee Dixon. Spurs eventually halted Arsenal's quest for another Double by winning the Wembley semi-final; Leeds went on to win the League title the following season.

Defending league champions Leeds were leading 2-0 at Highbury before Ray Parlour and Paul Merson - with a spectacular 25-yarder - forced a replay.


But Wright forced extra-time, swinging at a Kevin Campbell knock-down and seeing the ball creep inside Lukic's right-hand post. The Gunners seemed to find new reserves of energy in the extra period, and Merson shot from an acute angle against the post and was then thwarted by a fine Lukic save. However, Wright finally decided the tie in the 117th minute, firing in a fierce shot which Lukic got both hands to but couldn't prevent from bouncing over the line. Arsenal went on to lift both domestic cups that season.


Manchester United's win against Charlton the day before meant Arsenal had to beat Leeds, then win their remaining two matches, to stand any chance of retaining their title. Leeds needed to win to avoid the drop.

Harry Kewell fired Leeds in front after just five minutes with a brilliant effort from 25 yards.
Thierry Henry equalised on the half-hour mark, but Ian Harte restored the visitors' lead just after the break with a deflected free-kick. Back came Arsenal again, Dennis Bergkamp levelling things. Now Arsenal were pouring forward in search of the vital winner, leaving themselves vulnerable to a breakaway. With two minutes left, a Gunners attack broke down, Dominic Matteo released Mark Viduka from a possibly offside position, and the Australian surged forward to beat David Seaman before turning to check if the linesman's flag was still down. It was, and Leeds stayed up.

Arsenal had won their two most recent Premier League visits to Elland Road by four goals to one. Now in the FA Cup though, Viduka again threatened to be their nemesis when he scored a freakish goal after eight minutes, charging down Jens Lehmann's attempted clearance which rebounded off him into the net.

Leeds' spirit belied their lowly League position, and they tested Arsenal's resolve further
before the Gunners made their own qualities tell. Henry volleyed home a Freddie Ljungberg cross from 12 yards on 26 minutes, and six minutes later Arsenal went ahead when Henry's astute pass was side-footed home by Edu.

Steady Arsenal pressure in the second half eventually bore more fruit when Robert Pires, on as an 81st-minute substitute, stroked home another Henry assist with three minutes to go. That was long enough for Pires to orchestrate another inventive attack which was finished by Kolo Toure at the far post.

Arsenal, unbeaten in the League since Leeds had defeated them 3-2 the previous May, swept to within a point of the Premier League title with a remarkable performance in which Henry scored four goals, prompting Wenger to declare: "I don't think there can be a better striker in the world than Thierry at the moment." But the outstanding Pires had put Eddie Gray's side - already teetering on the brink of relegation - behind after six minutes with a glorious curling shot from 18 yards. 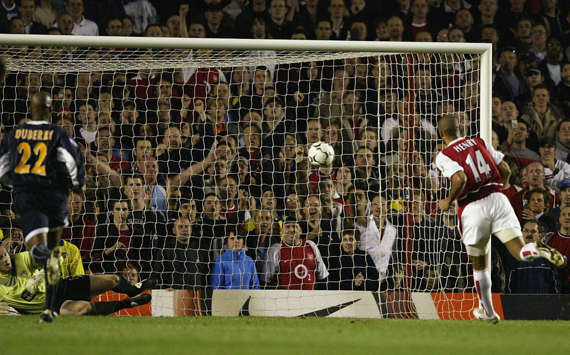 Leeds responded well through the combative Alan Smith and Viduka, but once Gilberto Silva's clever pass enabled Henry to beat the offside trap and race forward to slide the ball past Paul Robinson, it was all about the Frenchman. He converted a penalty after Michael Duberry handled to deny Bergkamp, sending Arsenal in three-up at the break. They dominated the second half, Gilberto again supplying Henry who beat the exposed Robinson to record the fifth hat-trick of his Arsenal career.

Then came the icing on the cake: Henry left four defenders in his slipstream and, despite being fouled from behind, causing him to stumble, sidefooted the ball past the 'keeper to make it five, his 150th goal for the club.

Arsenal went on to clinch the title at White Hart Lane, completing their historic ‘Invincibles’ season. Leeds finished 19th and were relegated.